The obvious highlight of the Cycle Show is the Cycling UK stand at L41...
By Sam Jones
Friday, 23 September 2016

From Friday 23 to Sunday 25 September the cycling industry has descended upon the NEC in Birmingham to bring you the latest and best of cycling kit. Cycling UK's Sam Jones has trawled through hundreds of exhibitors to bring you his favourite finds...

If you're heading to this year's Cycle Show at the Birmingham NEC, then you'll probably notice that this year the cycling industry is going for electric in a big way. It's not surprising, considering that this was the theme for Eurobike which was held only a couple of weeks earlier. Going by the clear industry enthusiasm for ebikes, expect 2017 to be the year when the UK finally starts catching up with the European continent's love for electric assist.

As you would expect, the stands are showing their latest and best kit...unfortunately this means that if you're in the market for buying, be prepared to part with some serious cash. In my hunt through the show for interesting exhibits, some of the prices were truly eye-watering! However, as shows like this are a little like letting a child loose in Hamleys, surely it's not too wrong to do a bit of window shopping... 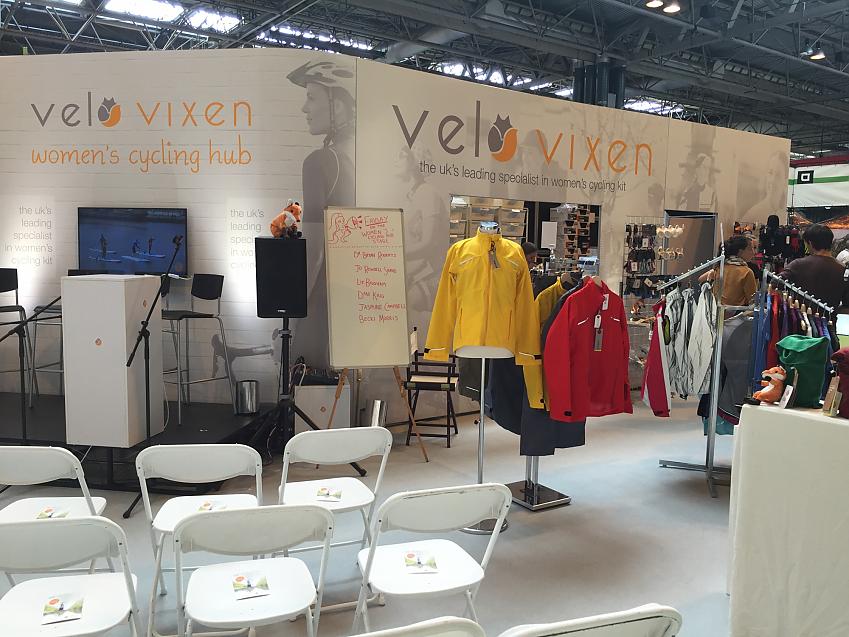 It's not so much one item here, but rather the whole package. Speaking to colleagues at Cycling UK, my partner and cycling friends, one topic which springs up over and over again is how cycling clothing is largely catered towards men, with quite often only a pink option being available if you're a woman.

Velovixen bucks the trend and provides a show case for quality first, aesthetics second cycle specific clothing which covers pretty much every cycling discipline you can think of, from road to mountain biking. On the stand they have over 50 brands of women only kit and friendly informed staff who are very approachable. In addition, right next door to their stand they're hosting the Women's Cycling Hub, where some of the very best in women's cycling are on hand to talk, including top cyclists, designers and doctors.

There's a chance to win £100 off their range, and also 20% off when you buy two or more items of clothing in their bundle offer.

For the everyone reading this, I'd definitely recommend checking out the Findra section, where there's an array of merino wool buffs which are perfect for those cooler days ahead! 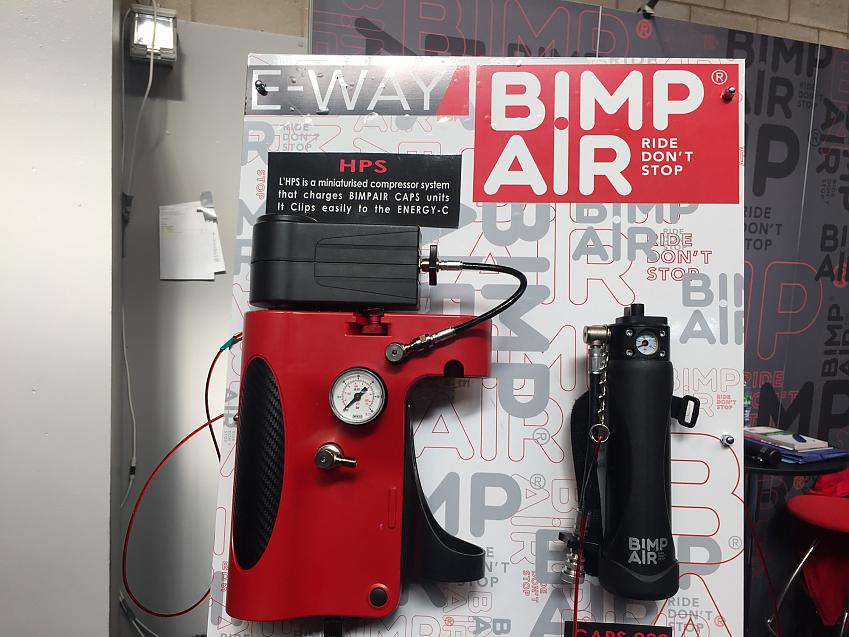 If you're a fan of using CO2 gas canisters over a pump, but worried about the waste issue, then perhaps French company Bimp Air is for you. Billed as "the first rechargeable stand alone inflation device" it certainly impressed as it filled a flat fat bike tyre in less than 7 seconds!

It's in two parts, with a recharging centre that can plug into the mains or a car lighter port, and a portable pump. The pump that can equally fill your tyres or suspension up to 50psi in next to no time, and is a sturdy bit of kit.

Downsides, on the go it's heavier than a regular pump and more bulky than CO2 cartridges, so really would only be necessary if you struggled to use a hand or track pump. Possibly it's a solution looking for a problem, but could be worth watching in the future as it surely becomes cheaper and more portable. For now it comes with a hefty 400 euro price tag! 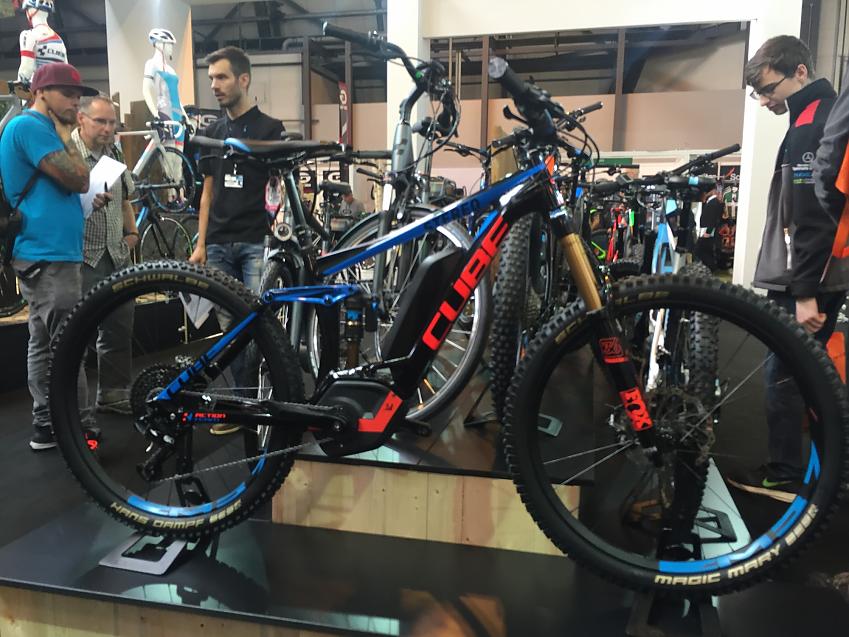 Very much at the pointy end of mountain biking, the non-electric version of this full suspension bike is the one used by Cube's Enduro Team. It's the top e-mountain bike that Cube offers, and does look a lot of fun, if you like pointing your bike downhill and hurtling along at speed!

Weighing in at 22.2kg, it's by no means lightweight, but the Bosch electric engine should ensure you get back to the top of slope without noticing the extra kilos. To buy, you're looking at close £3,500... 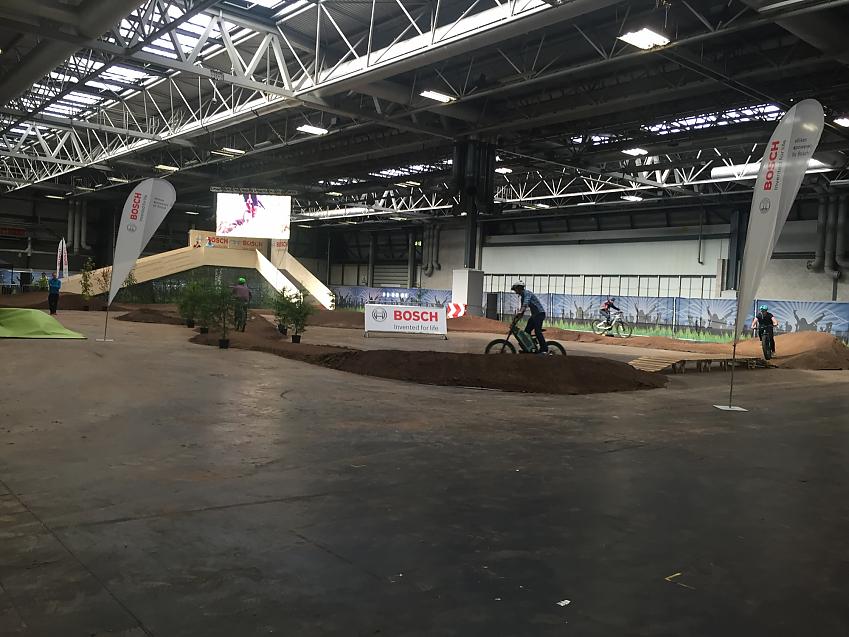 If trying rather than buying is more your thing, eMTBs are available for you to take for a spin at Bosch's eMTB track. Unfortunately the Cube mentioned above isn't available to ride due to the test version being stolen a couple of weeks earlier, but Cube have nearly everything else with an electric engine available to hammer down the dirty tracks, such as fat bikes, mountain bikes and 29+ bikes.

German company Haibikes are also there with their wide range of eMTBs running on both Bosch and Yamaha electric engines, as are Trek cycles too.

If you're naturally dismissive of the ebike movement, then suspend your disbelief and give them a go - believe me you'll be surprised at how much fun they are! 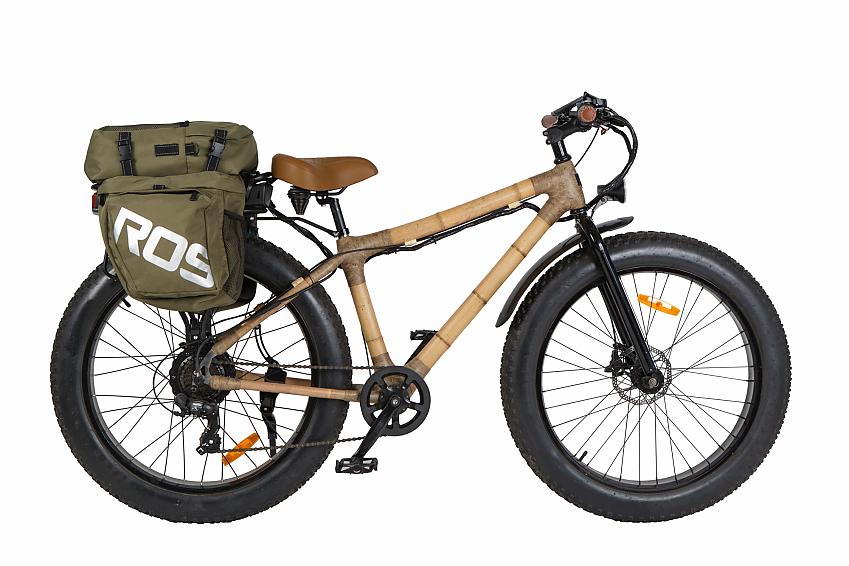 Very likely the world's first e-Fat Bike made from Bamboo, this bike is made by life-style company Kate Woods which specialises in bamboo manufacturing. These bikes have an estimated range of 40 miles before you'll need a recharge, so if you do get yourself one, multi day trips into the great unknown aren't really going to be possible, but a day's micro adventure should work perfectly!

Each bike is made for the customer, so you'll get a unique bike, however with a £2,200 price tag and perhaps not the most advanced e-assist capability this bike might be more of style statement rather than practical choice. Still it is eye-catching and worth popping round to the Kate Woods stand for a look at this one and the other bamboo bikes on show too. 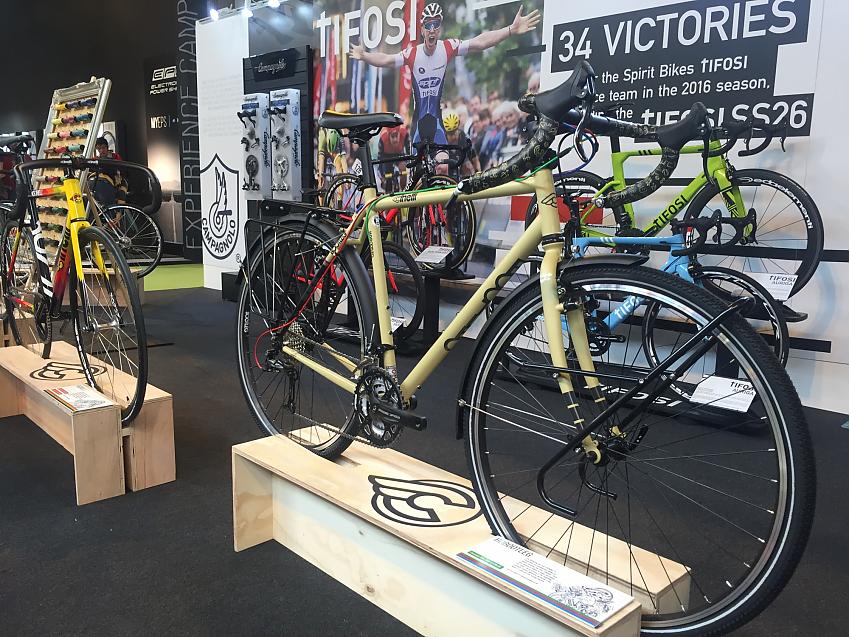 Recently reviewed in our Cycle magazine, Italian bike manufacturer's Hobootleg is one of the few touring bikes you might come across at the Cycle Show. It's a robust tourer, and quite a complete package coming with mudguards and both front and rear Tubus racks. Over 24,000km of competition have gone into its development, including two Tours d'Afrique.

Having considered this bike myself (prior to picking up a Surly Disc Trucker) but never having seen it in the flesh, I've got to say that it's pretty handsome and I regret not taking it out for at least a test. It's a sober breath of fresh air among all the top road and off-road bikes, and while its price of £1,299 is still not to be sniffed at, compared to many of the other bikes, it could almost be considered cheap! 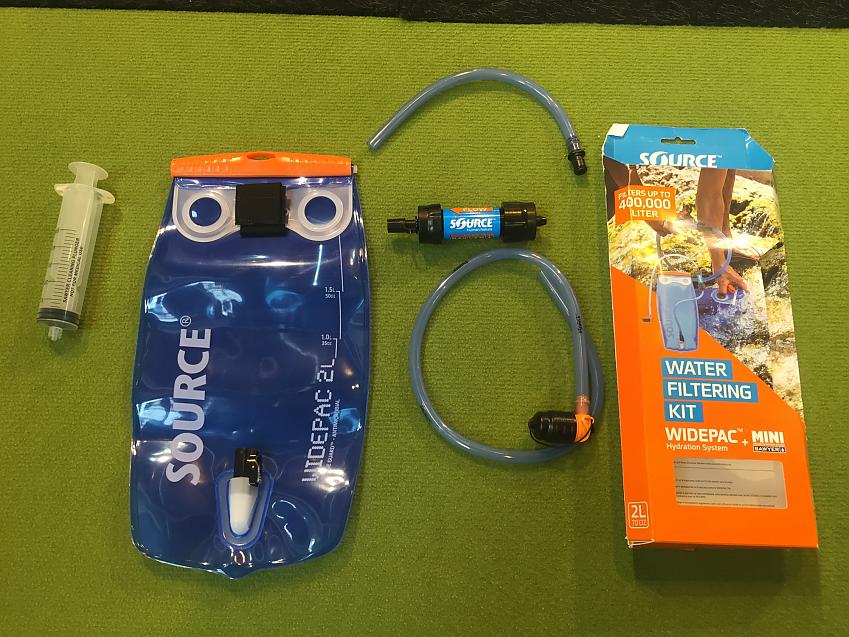 If the Hobootleg is your kind of ride and you're into trips into the wilderness, then you might like to consider Israeli company, Source, and their Widepac Filter Hydration System. Source are a company of some pedigree, equipping both the US and British armies with much of their hydration equipment.

This particular set (rrp £57) is designed for the traveller who won't have access to clean drinking water on their travels. It can reputedly filter up to 100,000 litres of water without the need for chemicals or batteries, removing 99,99999% of bacteria (Salmonella, cholera and E.coli) and 99,9999% of protozoa (cryptosporidium and giardia), exceeding EPA recommendations for removal rates. You can fill it at any creek, river, well, lake or pond and be sure to drink clean water. With a planned tour in Iceland on the cards for next year, it's definitely on my kit list. 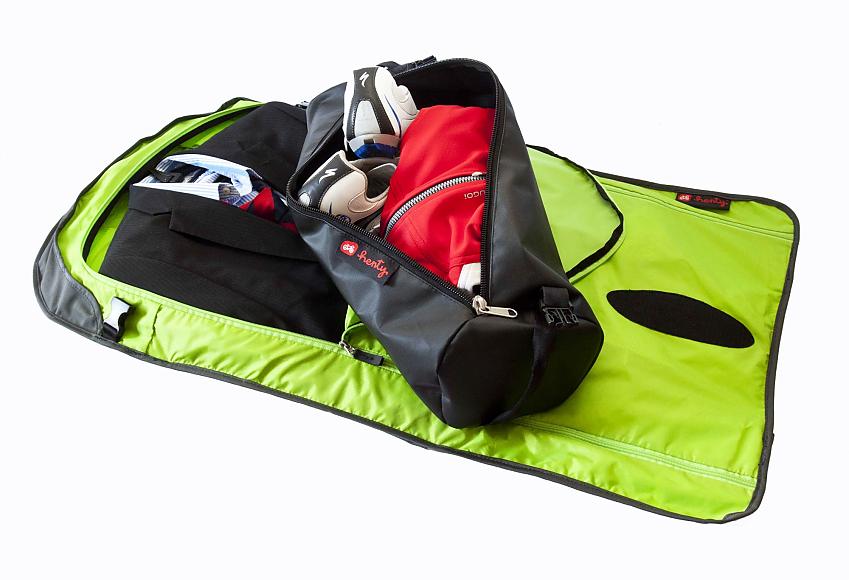 For the urban cyclist where potable water is readily available, Henty's Wingman Messenger (£119) might appeal more than a water filtration system. It's designed primarily to transport a suit without creasing, so perfect for the commuting cyclist that needs to wear and leave a suit at the office.

Henty are an Australian company which has been around for three years, and they've put a lot of thought into this bit of kit. Other similar bags on the market require your suit or dress to be folded, but with the Wing Man, it's all about the roll which should prevent creasing. In addition to the suit bag, there's a 15litre kit / gym bag, which you can put your shoes etc in and also use as a satchel when you reach your destination. The roll bag also features an external pocket which can fit a small lap top or tablet computer, and with the separate protective rain cover, it's guaranteed to keep your smart togs dry.

It comes in two sizes, compact and standard. The compact version is smaller by 10cm in width to the standard, and is designed specifically for carrying dresses. Both will work as aircraft carry on luggage, making this a practical solution for when you need to travel with a suit on or off the bike. 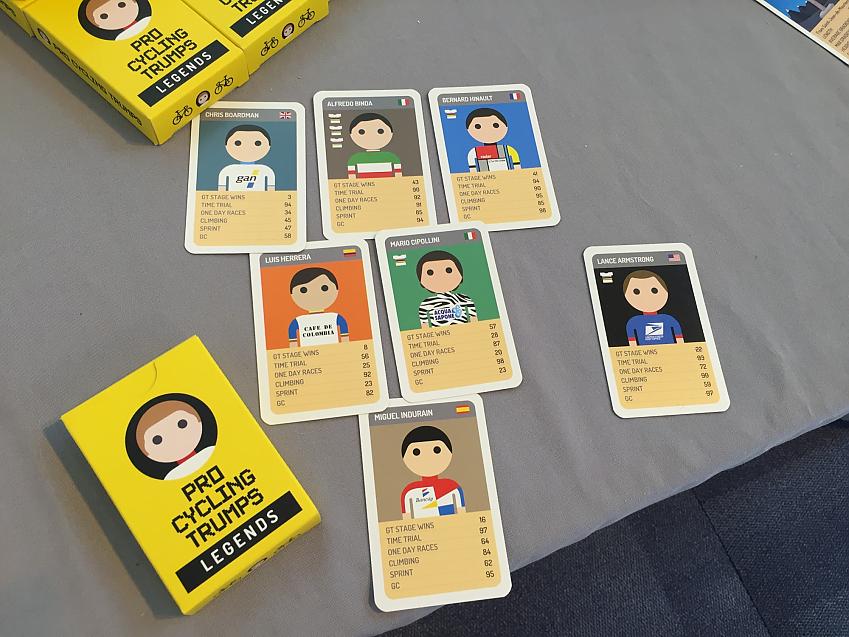 Top trumps are very much a nostalgia item for many of us, bringing back memories of playground games of comparison between racing cars or aircraft. Pro Cycling Trumps has embraced this with a sense of fun, and combined it with a love for elite cycling.

Priced at £10 a pack, there are a variety of versions available at the show including 2016 pro, legends, track and women cyclists. There's also the option to create a customised version - perhaps with your own club and friends? My personal favourite was the "legends" which includes an entry for Lance Armstrong whose stats are all crossed out!

You can find these on the Endurance Conspiracy stand at K25. 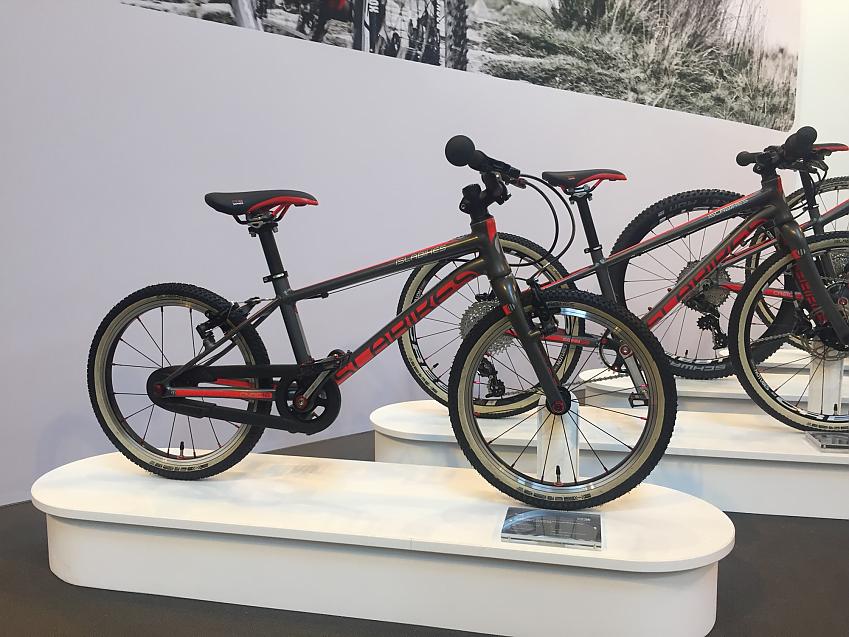 Islabikes are well known for their quality and attention for detail. The Cnoc 16" from the Pro Series is no exception, and for a child's bike (aimed at 4+) it does look like a dream light bike. It's stated as being only 4.8kg, which is going to be a much more manageable weight for your little one than most of its competitors. It comes with a price tag though which might make you blanche: £799.99.

This price might not be so far out of reach as you think, as founder Isla Rowntree has also launched their inspiring Imagine Project at the show. Through this project, Islabikes are rethinking the way bicycles will be made and supplied in the future, and is looking to make longer lasting bikes which will be hired and recycled throughout their lifetime, hopefully meaning that if buying Islabikes' top models is out of the question, perhaps renting is not.

Rowntree helped redefine the children's bike, so we're pretty excited to see what this next step could mean for sustainable bike culture in the future. You can check out the project in her own words through the below video:

Isla Rowntree will be speaking at Cycling UK's Member's Get Together on 08 October in Manchester. 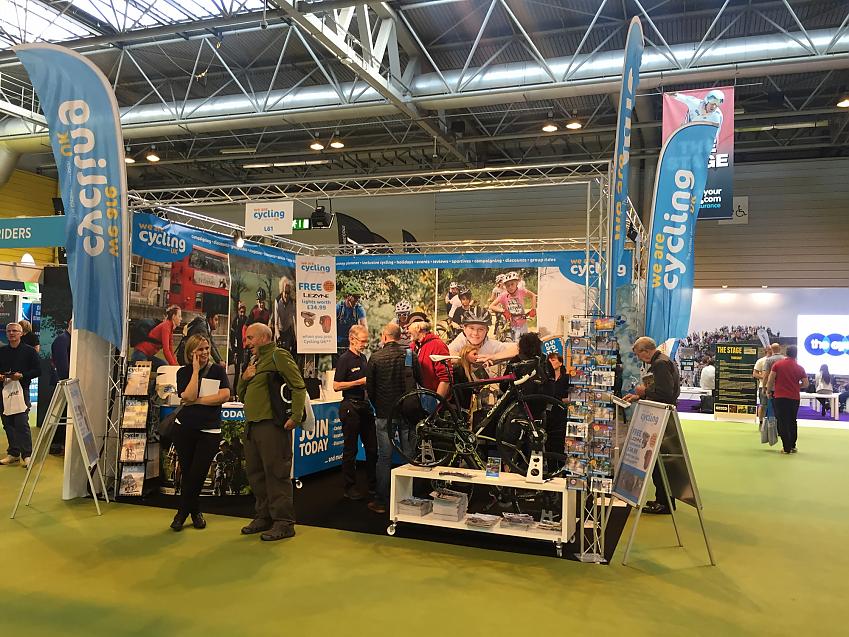 If, like me, some of the prices have left you a bit startled, then fear not!

Head over to Cycling UK's stand (L41), and have a chat with our staff on hand to learn the latest about the organisation. Have a go (for free!) at spinning our wheel of fortune, where every spin's a win, and if you're not a member already, then perhaps consider joining. Membership starts from as little as £3.59 on monthly direct debit, and if you sign up at the show you'll also get a free set of Lezyne lights worth £35 - showing that not everything of quality has to cost a fortune!