Research from the Green Alliance, published today, 8 December 2021, undermines transport secretary Grant Shapps' belief that we can decarbonise transport without changing our behaviour

Transport secretary Grant Shapps seems determined to avoid being accused of waging a "war on the motorist". When he launched his Transport Decarbonisation Plan (TDP) in July 2021, he said it provided "the opportunity to decarbonise transport without curtailing our freedoms. It won’t stop us driving."

This was despite clear evidence that this reluctance to tackle the relentless growth of motor traffic was incompatible with the government's 'net zero' climate targets.

It was also contrary to some much more positive statements hidden away in the TDP itself. In particular, there is some text buried mid-paragraph on page 6, which actually acknowledges the need to reduce road traffic, at least in urban areas.

Yet the government's latest National Road Traffic Forecasts - which it used to justify a 5-year budget of £27.4bn for England's motorways and trunk roads - predict that road traffic in England and Wales will grow by between 17% and 51% by 2050 (compared with 2015 levels). 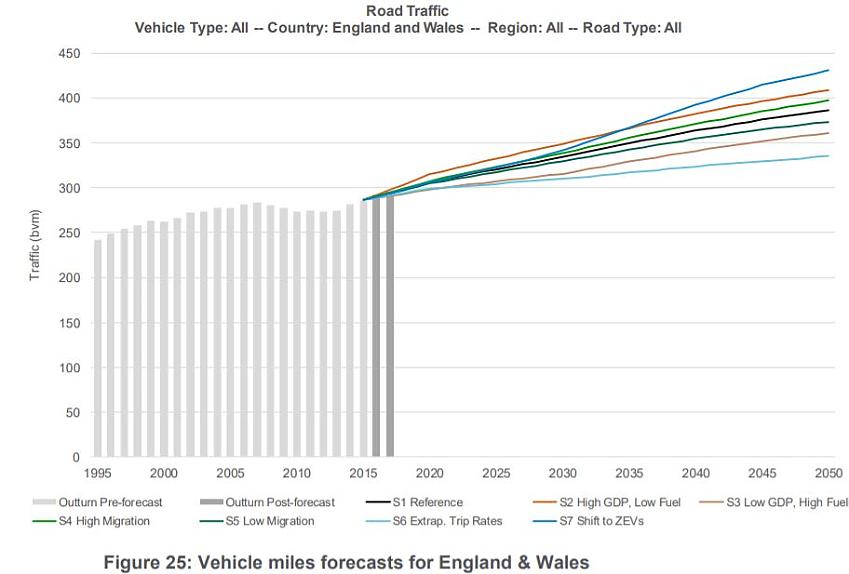 This is probably impossible - and certainly extremely undesirable for all sorts of reasons, not least because of the terrible implications for the climate, however quickly and completely we might switch to electric-powered vehicles (EVs).

Time for ministers to "listen to the science"

Today, our friends at the Green Alliance have published new research, showing that this reluctance to tackle the relentless growth of road traffic is almost certainly incompatible with reaching the Government's 'Net Zero' target. It reinforces similar findings from Friends of the Earth and the think-tank IPPR.

The Green Alliance evidence clearly debunks the idea that EVs will save us from having to change our travel habits. It shows that this idea rests on wildly optimistic assumptions about how quickly we get rid of our existing petrol or diesel-powered vehicles. Indeed, the Government itself has published graphs showing its estimates for the rate of EV update, based on much more realistic assumptions.

Using these Government projections, together with a more optimistic 'in between' scenario, Green Alliance estimates that the annual mileage travelled per car needs to reduce by 20-27% by 2030, if the Government is to remain on the 'balanced pathway' to reach its 'net zero' target, as recommended by the Committee on Climate Change (n.b. the CCC is the Government's statutory advisory body on meeting its Climate Change Act targets).

I'd add that we'd need to achieve much steeper cuts to traffic levels, if the UK were to adopt the approach advocated by the Tyndall Centre for Climate Change Research - i.e. one in which developed countries make a globally equitable share of the burden of cutting emissions, rather than expecting poorer countries to shoulder it.

Before reversing, slow down and stop!

However, the first step towards reducing road traffic is to halt its relentless growth. If cuts of around 20-27% need to be made by 2030, then we surely need to halt the growth of road traffic within a year or two.

The strategy to achieve this will need to involve action on three complementary broad fronts:

Making the numbers stack up

Grant Shapps appears to be terrified of saying anything that might be interpreted as "waging a war on the motorist". But it surely isn't 'anti-car' to want to live in a world with less traffic - surely anyone would vote for that?

Yet the Government continues to invest £24bn in roads that are either unnecessary or else will make the problem worse. Conversely, it has still allocated only a quarter to a third of what is needed to meet its own targets to double cycling and increase walking by 2025.

It could make up the difference so easily by acknowledging:

The Scottish Government has set a target to reduce car-kilometres by 20% by 2030 (based on 2019 levels), while the Welsh Government has committed to increase the proportion of trips made by sustainable modes (i.e. by walking, cycling or public transport) from 32% in 2019 to 45% by 2040.

Meanwhile the UK Government is still picking numbers out of thin air for the increases in walking and cycling that it aims to achieve in England (n.b. it was also doing this 25 years ago!), without any idea of whether (or how) these are compatible with its net zero targets. It is equally unable to say whether its transport funding allocations are compatible with those aims. Indeed, we know it is sitting on evidence which shows that they aren't.

Ahead of the COP26 international climate summit, Cycling UK communicated loud and clear that cycling fights climate change. With the UK's Presidency of the COP process now continuing for the coming year, Cycling UK hopes to build on the partnerships we have been forming with groups like the Green Alliance, to strengthen the case for halting and reversing the growth of road traffic.

Creating good cycling conditions will enable people to drive less, helping to bring about a less car-dependent and traffic-dominated society. But the reverse is also true. A willingness to reduce traffic is essential for freeing up Space for Cycling, allowing the humble bicycle to play its part in hopefully averting some of the worst of the climate crisis.

The Government still isn't on course to meet its 2025 cycling targets. So what now? View

We need traffic reduction, not technofixes, to solve our pollution crisis View

Air pollution: Why tomorrow could be different View