Jools Walker’s cycling plans for 2020 had to change in the wake of the pandemic
By Jools Walker
Monday, 28 December 2020

Cycling blogger and author Jools Walker is the carer for her mum who is shielding. Jools reflects on a year where her plans to visit friends had to be abandoned and how her cycling family helped her feel less alone

If you were to ask me to quickly sum up my 2020, the saying ‘Man plans, and God laughs’ immediately springs to mind. I don’t say that as a particularly religious person. Still, a much higher and invisible force certainly had other ideas when it came to my intentions for the year.

It’s not like I had all 12 months meticulously mapped out, but there was one thing I was sure of: I was going to be doing so much cycling in 2020.

The seeds for my new bike adventures were sown the year before. I’d spent the previous summer on a whistle-stop tour of the UK, promoting my book. Parts of it were done with Paisley (my beloved Brompton) in tow, and the whole thing was quite the experience.

As someone who can get rather anxious in social situations and is an ‘outgoing introvert’, doing a book tour had me excited and terrified in equal measure! It was incredibly pleasing (and a huge relief for a change) when the excited half of me won through, especially when the positive consequences of the whole thing dawned on me.

Those words I had written took me to places I may have never visited or seen by bike. They connected me with internet pals in real life and allowed me to meet new people on my travels. My extended cycling family had grown even more, and when the tour came to an end, I knew I didn't want to let this feeling go.

I had to be careful about my own health because of my asthma, but I was more concerned about my mum’s. Being her full-time carer and Mum being clinically extremely vulnerable, the risks the pandemic posed for her were – and still are – unbearable to think about

I was now sticking dots to the map, happily plotting all the parts of the country I was going to return to and see more of – or visit new places for the first time. I was getting hyped about messaging my friends on social media who I’d be doing all these group rides with, and not freaking out at the idea of big gatherings!

None of these plans was set in stone, but that didn’t matter. Because time would be on my side in 2020.

Of course, I, like most of the planet, had no idea what this year actually had up its sleeve, and what it would do to my mental health. Everything changed in what felt like an instant, and things I didn’t even realise I was taking for granted were no longer guaranteed.

It was wild when all of those cycling adventures which were floating in the air suddenly went straight out the window. The buzz of being coaxed out of my sometimes socially awkward shell (and wanting to hang out with fellow bike friends) had been replaced with feeling low and isolated.

Living in a shielding household only added to that. I had to be careful about my own health because of my asthma, but I was more concerned about my mum’s. Being her full-time carer and Mum being clinically extremely vulnerable, the risks the pandemic posed for her were – and still are – unbearable to think about.

Back in March, when government guidelines told us we could leave our homes to exercise (alone) for an hour each day, it was the last thing I wanted to do. Not only was it a far cry from all those grand ideas to cycle and have fun with friends but it also had me feeling paranoid that just stepping out my front door was a risk.

What if I touched a surface outside, had a lapse of concentration when I got back home, didn’t wash my hands for at least 20 seconds and brought coronavirus into the house and infected my mum? These were the kinds of irrational thoughts which were clouding my brain. 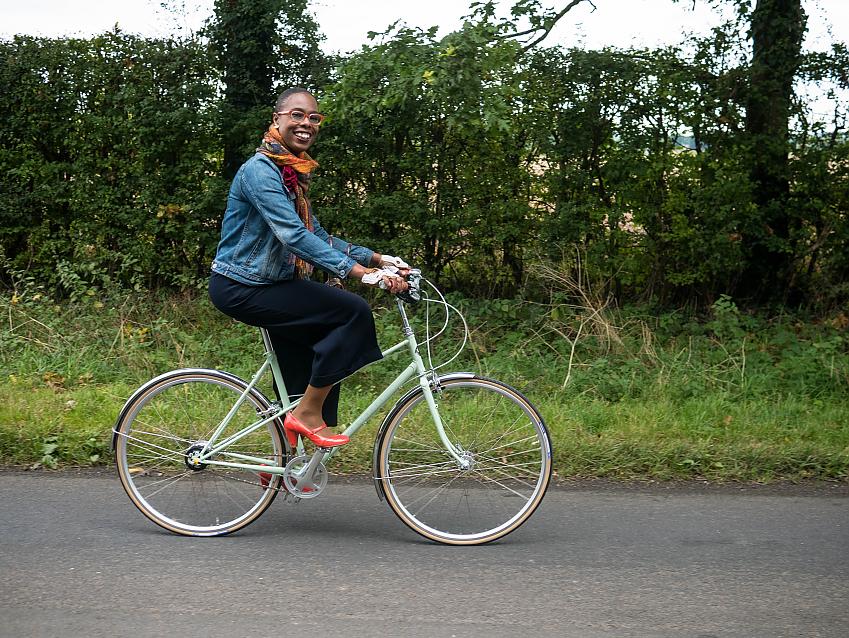 But there was also part of me that was desperate for the times where I could do ‘simple’ things. I was missing stuff like jumping on my bike, cycling over to my favourite lunch spot and sitting in a corner, quietly working away on my laptop.

It felt selfish wanting to get out of the house and have time for myself – especially as my mum had no choice but to stay indoors, with only me as her company. No other family members could come round and visit; she wasn't even allowed to head out for a stroll to the shops as it was too risky.

Trying to navigate all these feelings felt impossible – like there was no end in sight. But the one thing I thought was entirely off the cards – cycling with friends – would end up being the thing that helped to save my mind in the pandemic.

The rides certainly didn’t look like those I had plotted out before. There was no folding-up Paisley, popping her next to me on the train and heading to different cities and towns around the UK to meet with folks and ride. But I was able to cycle with hundreds of friends around the world when I did the Rapha Women’s 100 and was part of an Invisible Peloton.

I couldn’t pack my road bike down into a box, get on a flight and cycle part of the Tour de France like I did last summer. But I could attach that bike to my turbo trainer and cycle a scenic route in Watopia with fellow Zwifters, all from the safety of my front room.

There were compromises and there were changes. So much of my cycling life (and my life in general) as I knew it was suddenly out of my own control. I had to learn to roll with it and understand where this path that 2020 had brutally laid out would take me.

It showed me that although things had gone quite a bit off track, I wasn’t alone in feeling confused by it all. And I’ll never be alone even if I’m not able to physically be with my cycling family.

This rather horrific year and everything it’s thrown at me has taught me that I can always plan for tomorrow… but don't forget to live and appreciate today.

Here’s to 2021 being … well … whatever it may be and that somehow, we’re all able to smile and get through it. Together.

Jools is the author of Back in the Frame and the popular blog Velocity girl.