Cycling UK is inviting everyone to the join in the World’s Biggest Bike Ride on Saturday, 12 September as part of our Pumped Up campaign. Cycling UK Director Matt Mallinder tells us why he and his family will definitely be on the virtual starting line.

We’re not sure where we’ll go yet but on Saturday, 12 September my sons, Ozzie and Oliver, will be helping me pump up our tyres, oil chains and load some sort of picnic snacks and extra waterproof jackets in a pannier ready for the off.

If it’s bright, we’ll head up over the hill into the Devils Punch Bowl in the Surrey hills. If Storm Francis is still blowing, we’ll head off to the Downs Link disused railway line for a semi-protected ride under the canopy of trees. Both will involve some healthy childish rivalry sprinting against each other – and that’s just me.

In all honesty, it doesn’t matter where we go, more that we, like thousands of others, want to join in with the World’s Biggest Bike Ride to celebrate the bike and to showcase just what the bike has become to millions during the last five months of Covid-19.

One of the few upsides of the recent few months has been cycling’s rising star both for individuals and for the country. As lockdown started and we began to travel less for commuting or visiting family, the roads rapidly became quieter and more welcoming for people to contemplate cycling.

As most sports ceased, Professor Chris Whitty, the government's chief medical officer battled hard to keep the daily dose of exercise on the agenda. Long overlooked bikes were pulled out of sheds and tentative exploratory rides were embarked on.

What started as a few became many as neighbours peered over fences and saw the Jones from no.10 heading off on two wheels. Families struggling to prise children away from Xboxes saw their chance and soon many more people were heading out.

Bike shops were given special dispensation to stay open and an estimated five percent of the population went out and bought a new bike. Both country lanes and once traffic-jammed town centres became a playground for all. People witnessed and experienced the ease and liberation that the bike provided, with many areas of the country seeing doubling or tripling of cycling.

Of course, dear readers, you’ll be saying we all know how great the bike is – that’s why we’re members of Cycling UK, but this has been truly a turning point for cycling’s status in the nation. Now for the general public, cycling is not just a preserve of MAMILs or red light jumping oiks.

Not since Bradley Wiggins’s sideburns won the Tour de France or Chris Hoy’s thighs blurred around the Olympic velodrome has the non-regular cycling public and government truly seen what the bike can do for as all. They’ve witnessed the benefits for themselves and can understand the need for welcoming roads and space for cycling.

The Prime Minister called it a ‘golden age of cycling’ and has recently promised one of the most comprehensive sets of measures ever to capitalise on that trend .

It's released £2bn to kickstart this change with local authorities bidding for £250m to create safer infrastructure and dedicated cycle lanes. With the return of schools and likely associated traffic, coupled with many taking the opportunity of being childfree to also return to work, we desperately want people not to return to old ways of the motor car.

People have seen and benefited from clearer roads and, by staying on two wheels, we can continue this. We also want to reassure local authorities to fast track these new schemes and not lose sight of their ambition to create welcoming communities safe to cycle and walk in.

The World’s Biggest Bike Ride is just that opportunity. Now we want all cyclists everywhere, whether it’s the regular cyclists or new millions re-finding the love to stand and be counted. In many respects, we’re already in the midst of a massive big ride with numbers of people cycling during the lockdown doubling. We want to inspire people to keep riding.

Around 25 million people in the UK own or have access to a bike, so imagine if everyone all went out riding on one day. We’d have millions of people leaving their cars at home and showcasing again the amazing benefits of cycling. 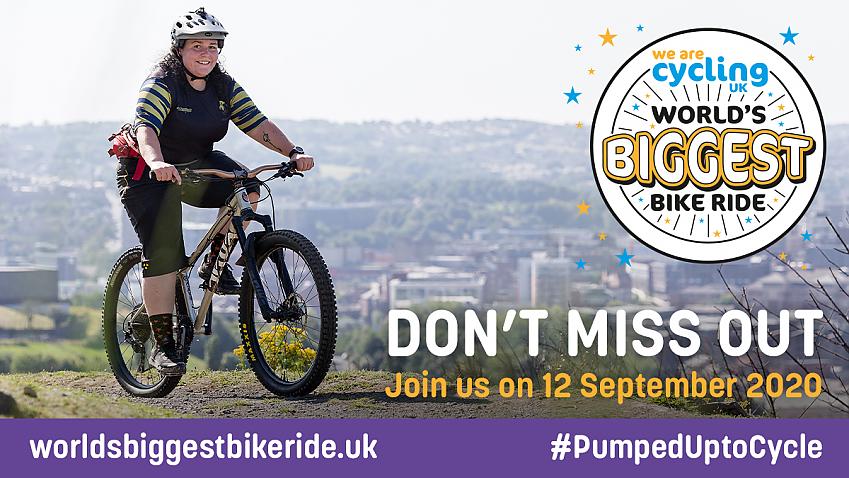 We know the powerful effects of cycling, for the communities where we live and work, but also on our health and wellbeing. Cycling is sometimes portrayed in the media as a minority interest activity – but if we all got out and rode on the same day, that would send a really powerful message that the investment in cycling from governments across the UK is vital and appreciated.

So whether it’s a ride with the kids like me, with family or a small group of socially distanced friends or a solo ride, please join with me and be part of the World’s Biggest Bike Ride. Just do it your way whether you’re old or young, fast or slow, prefer to ride on the road or the trails, the important thing is that everyone gets out and rides

Anyone who wants to take part in the World’s Biggest Bike Ride is encouraged to register their pledge at Cycling UK’s Pumped Up website: cyclinguk.org/pumpedup/wbbr

We're pumped up for cycling! View