Invest in cycling – but fix the planning system too

Invest in cycling – but fix the planning system too

You helped us save England’s cycling and walking budget, but to get millions more people cycling we also need to fix a planning system which designs for car dependency. Head of campaigns Duncan Dollimore explains why we need your support to improve planning laws, and how amendments to the Levelling Up Bill could give us a planning system fit for people, nature and the climate

In his autumn statement yesterday, the Chancellor Jeremy Hunt MP set out his plans for spending and taxation. These, of course, have different implications for people across the UK depending on their circumstances and where they live.

As we reported last month, there were real fears that money for cycling and walking could be slashed at Halloween. Thousands of members and supporters then answered our call to email their MP, asking them to contact the Chancellor and Secretary of State for Transport to make sure the active travel budget wasn’t cut.

Did emails to MPs work?

It's always difficult with campaigns to say that an outcome is a direct consequence of your campaigning, not least because you’re often part of a wider collective voice, with other organisations raising the same or similar arguments.

However, five weeks ago, there were real concerns that the Halloween budget would be fright night for cycling and walking. The date was then put back, and following thousands of emails from constituents, many MPs then asked questions in Parliament about the active travel budget.

So, a huge thanks to everyone who supported our campaign and emailed their MP, because yesterday, the Government didn’t row back, as we feared they might, on its commitment in the second cycling and walking investment strategy (CWIS2), to spend £3.8 billion on active travel in the four years to 31 March 2025.

Only last month, the then Transport Minister Lucy Frazer admitted that at least £4.4 billion was needed over the same time period to meet the Government’s own cycling targets for 2025, and active travel funding in England is also less per head than in Scotland or Wales, and peanuts when compared to other transport funding.

Secondly, when inflation is hovering around 11%, freezing budgets is in reality a net reduction. However, in the context of what was an emergency budget, in a cost of living crisis, yesterday wasn’t the grim reaper day for the active travel budget we’d feared.

Although we’ll continue to campaign for increases in the active travel budget, the reality is that it’s not just the size of the budget that matters, but where and how it’s spent.

At a local authority level, it’s often the case that decisions taken outside the transport team are the biggest barrier to getting more people cycling and walking – I’m talking about planning!

Having avoided drastic cuts in the active travel budget, it’s vital that those within local authorities spending limited funds who are trying to re-think how people move and give them more sustainable choices, aren’t constantly undermined by a planning system designed to build in car dependency.. 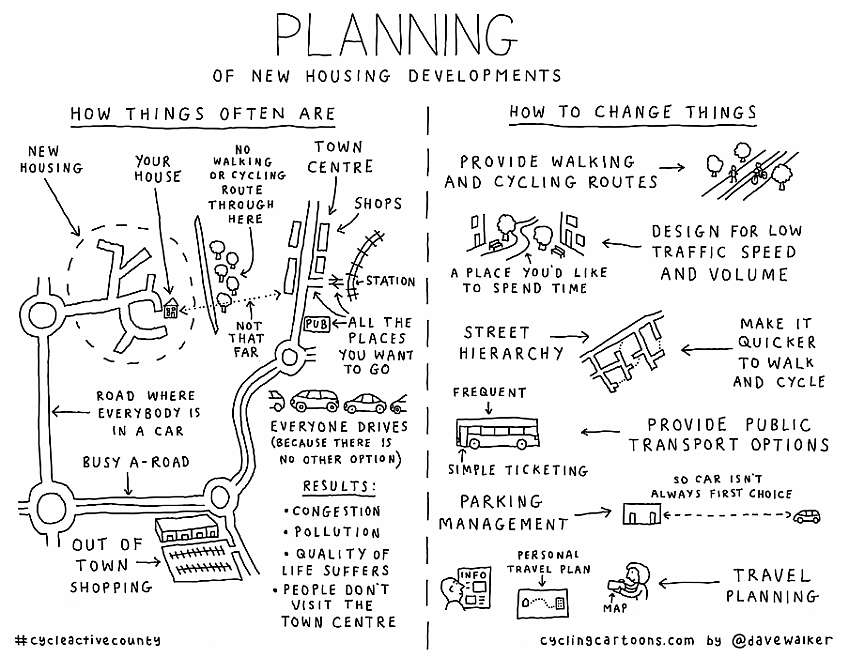 And that’s why we need your help again.

It’s hard to think of a time in recent years when politicians haven’t been talking about reforming England’s planning system, but this time, it looks like something is actually going to happen.

The Levelling Up and Regeneration Bill, which includes various planning reforms, will be debated in Parliament on 23 and 28 November.

Cycling UK and 28 other organisations have coalesced under the umbrella of the Better Planning Coalition, (BPC) working together and with MPs to improve the Bill through various amendments.

The coalition’s members are united by a common goal: a planning system fit for people, nature and the climate.

To achieve that, BPC has adopted six tests for reforms to the planning system.

Cycling UK is asking MPs to support three BPC-backed amendments which reflect two of these tests, namely the need for developments to be planned, and for planning policies and decisions:

Why this matters – a Tonbridge Tale

I know. Planning feels like a dense and rather dull topic, so why are Cycling UK talking about pedal-powered planning?

It’s because planning policy has such a vital role in tackling the environmental, health and other impacts of transport.

Currently, it fails to support cycling and other sustainable transport, and instead promotes car-dependent development, contrary to the Government’s aim to decarbonise transport and its wider legal commitments to progressively decarbonise the economy.

I didn’t appreciate the disconnect between policy and decision-making around planning, housebuilding, urban development and public health, until I moved to Tonbridge in Kent a few years ago. I’d moved in with my partner, who’d bought a new-build house on a brand new estate, less than a mile from the town centre as the crow flies.

Suddenly, I was driving everywhere – to pick up a paper, get to the train station, or just to take the dog for a walk away from traffic. I stopped using my Brompton to get to and from the train station, we never walked into town for a drink or to go to the shops, and within a short period of time my travel behaviours had changed.

Instead of an estate built to enable people to easily walk or cycle into Tonbridge town centre, this one designed in car-dependency from the outset.

Cycling into town involved a circuitous route out of town, around extremely busy roundabouts, and along an ‘A’ road only the brave would choose to cycle on during rush hour. Walking into town wasn’t much better, with no direct route, lots of pavement parking, and half-an-hour negotiating narrow pavements alongside heavily congested roads.

So, my partner was driving me to and from the train station, and her daughter to and from college, and we rarely went to Tonbridge to loiter, shop or spend time in the high street.

It wasn’t really that we were choosing to drive, but rather that the planning system had produced an estate designed to remove transport choices.

If we want people to ditch the car for short journeys and opt for active travel, then walking and cycling have to be easy and attractive choices.

But we’re still building housing estates without active travel corridors to local shops, schools and amenities, instead of designing to give people a chance to change.

Amendment to the Bill could fix this

Loads of amendments to the Bill will be put forward, but there are three which we’re asking MPs to support, all drafted with BPC’s common goal in mind: to create a planning system which works for people, nature and the climate.

If we can get enough MPs to support them, decision-making would be more joined up, and planning policy and decisions would reflect wider government goals by:

But we won’t get enough MPs to support these amendments unless people let their MPs know that this matters to them.

You can help by emailing your MP and asking them to support these amendments.

Unless we improve our planning system, we’re at risk of building more new developments which design in car-dependency, don’t give people sustainable transport choices, aren’t consistent with Net Zero, and which effectively plan for poor health rather improving health and wellbeing.

We’ve drafted a guide with more detail about these amendments, and why they’re so essential, so if you can spare a few minutes, please help us build active travel into the planning system, using our online action to email your MP, asking them to support these amendments.