A future free from close passes? Learner drivers are the place to start

Driver education has a vital role to play in putting an end to close passing of cyclists
By Keir Gallagher
Friday, 15 February 2019

A future free from close passes? Learner drivers are the place to start

After the success of working with police forces, Too Close for Comfort is now expanding to educate young drivers about the importance of safe overtaking. Campaigns Officer Keir Gallagher was at one of the first outings - an education day with Cardiff schools.

Last year, I decided it was finally time. I’d been putting it off for years. I decided to learn to drive. As a city dweller with few qualms about cycling wherever life took me, I’d had little need for a car, but having a licence I didn’t need seemed to make a lot more sense than to potentially find myself needing a licence I didn’t have.

Six months on and, although I haven’t driven since, I’m glad I learnt – not least because the learning process was a hugely informative in terms of understanding the roads and road users from a different perspective.

Amongst other things, I was surprised by the relatively small number of cyclists I encountered whilst taking my lessons. Having been closely involved in Cycling UK’s Too Close for Comfort campaign over the past year, thinking about overtaking cyclists was at the forefront of my mind when I first got behind the wheel, but by the time I sat my test, after about 25 hours of driving, I had only overtaken cyclists on a small handful of occasions.

Of course, as someone who’s been on the receiving end of their fair share of close passes, I was careful to give as much space as possible, helped no doubt by a driving instructor who is himself an avid cyclist.

However, it struck me that, for many learners, the opportunities to practice overtaking cyclists whilst under the guidance of an instructor may be severely limited.

With 17 to 21 year olds cycling less miles on average than any other age group between 22 and 59, I realised that very few learner drivers may ever actually learn how to overtake cyclists safely. No wonder close passing is such a pervasive issue.

So, while there’s undoubtedly more to safe driving than just education, education, education, (clarity with the law and effective enforcement regimes are invaluable, for example), intervention at an early point into the learning-to-drive process could represent a significant step forward in overcoming the bane of many cyclists’ lives – close overtaking. 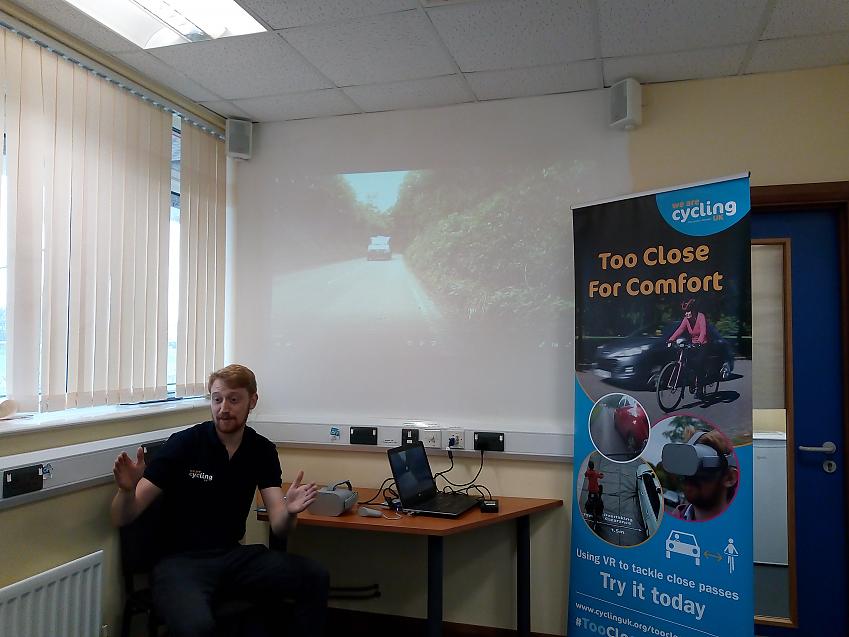 Of course, delivering that education has never been straightforward – simply telling learners how to perform an overtake just isn’t enough to embed a proper understanding of the issue. However, having produced our new ‘changing perspectives’ virtual reality film for police forces to use as part of live operations, it quickly dawned on us that while roadside education was a fantastic starting place for this exciting new technology, a vast potential was waiting to be tapped in terms of sharing the film with learner drivers across the country.

I was therefore delighted to be given the opportunity to take the film along to a Cardiff Road Safety and Training Team’s flagship ‘Megadrive’ event this week, which saw 15 to 17 year olds from schools throughout the city split into small groups and receive road safety education from police, the fire service and St John ambulance.

With virtual reality headsets in tow, Cycling UK joined the rotation and provided around 60 young people the opportunity to experience a close pass and a demonstration of a safe overtake – from both a cyclist and driver’s perspective.

The response from the students was fantastic.

At the start of the sessions, which followed many students' first ever experience of driving, on a road safety training test track, I asked for a rough idea of how much space should be given to a cyclist when overtake. The answers varied greatly, from 0.5m to 2m, but what was clear was that there was no general understanding amongst the group of what amounted to a safe pass.

Watching the film, I realised that young drivers are the perfect audience for a virtual reality experience - totally at home with this cutting-edge technology, each group of students were fully immersed in the environment, looking around and often reacting with surprise as they experienced the ‘close pass’ from the cyclists’ perspective.

After the headsets came off, the discussion flowed naturally between the students, and there were two clear standout responses which, for me, totally summed up the importance of the film and the role it could play in changing drivers behaviour around cyclists.

It was repeatedly mentioned that the pass felt a little close but mostly safe from the driver’s perspective. However, from the cyclist’s, it was a real shock.

Firstly, many students highlighted the impact of the two perspectives - the cyclist and the drivers. For the close pass, it was repeatedly mentioned that the pass felt a little close but mostly safe from the driver’s perspective. However, from the cyclist’s, it was a real shock. To those who ride regularly, this may seem obvious, but we know that one of the key issues when it comes to close passes to is that many drivers may not realise just how intimidating and dangerous a close pass can be.

Until significantly more people begin taking up cycling, virtual reality is the best possible way to improve driver understanding of this issue.

The second common reaction was summed up by one student, who said: “even once I knew you should give 1.5m space to cyclists when overtaking, I hadn’t realised how that actually felt in real life until I saw the film”.

For me, the importance of this cannot be overstated. A famous Confucian proverb says: “tell me and I will forget, teach me and I may remember, involve me and I will learn”. While nothing will ever equal the value of real-life practice with a driving instructor, the virtual reality film comes about as close as it gets to full-on involvement without actually getting behind the wheel, ensuring viewers have a clear visual understanding of a safe overtake, and not simply a conceptual one of ‘1.5m’.

Throughout 2019, the Too Close For Comfort campaign will be taking on an educational role – the film is already due to go on Highway England’s new ‘Driving Hub’ for learners, and other events with schools are being considered. Longer term, we’d love to see every driving instructor have access to the film to show their students, and we’re delighted to note that the film is already having an impact internationally, with the Gardaí in Ireland requesting a copy of the film to show on their own VR sets – we were, of course, more than happy to oblige.

Of course, there’s a long way to go, but with virtual reality technology becoming increasingly accessible, and more and more schools using VR as part of their regular education, there is a huge potential to have thousands or even tens of thousands of learner drivers viewing the film and gaining a better understanding of how to overtake cyclists safely – and why this is so important.

Coupled with the vital enforcement work of the police in running live Close Pass operations, this promises to be another significant step forward in the quest for safer overtaking.

What should the Highway Code say about overtaking distances? View

What did Cycling UK's campaigns achieve in 2019? View
Cycling UK continues to support the UK to cycle
This remains true during this difficult period with the ongoing threat of coronavirus Covid-19
Read our latest advice on cycling