The THINK! campaign for bikes is relaunched - CTC assesses its impact

The latest DfT THINK! campaign for cyclists is an improvement
By Chris Peck
Thursday, 27 March 2014

The THINK! campaign for bikes is relaunched - CTC assesses its impact

Running in some of the cities that received money for cycling recently, the THINK! campaign follows the now usual 'give and take' message that equates cyclists and drivers as similar sources of danger, both of which need to 'play their part'. However, the messages it sends out are largely sensible.

A new cycle safety awareness campaign has been launched by the Department for Transport.

The campaign is based on imagery produced by Transport for London, and focuses on urban issues such as junctions, parked car doors and Advanced Stop Lines. Suburban and rural issues - such as close overtaking - are not given the same prominence in the campaign.

CTC objected to a previous incarnation of the THINK! campaign, and although the visual imagery of both is acceptable, the campaign fails to accept that in most cases, the blame for crashes between cyclists and drivers is nearly always laid at the latters' door.

Figures published by CTC two years ago - obtained from a major Department for Transport study into cycle safety - showed that, especially where adult cyclists are concerned, the vast majority of crashes are the fault of drivers.

However, politicians' postbags are stuffed with complaints about anti-social cycling, and officials feel they must include a bit of 'give and take' in order for the message to be acceptable to the wider public. It is true that a minority of people cycle on pavements, often because they are scared of using the road designed entirely for cars, or go through red-signalled pedestrian crossings, which in a more civilised country would be unnecessary and be replaced with zebra crossings. These sorts of acts are illegal, but commonplace because cyclists feel so excluded from the car-orientated road infrastructure and abandoned by a justice system that turns a blind eye to incessant illegality by motorists.

We are now in the strange position of having an organisation which represents motorists - the AA - having a better cycle safety campaign than the UK Department for Transport. Their campaign - sending stickers to its members - is aimed squarely at drivers, and doesn't trot out the line about red lights.

The Department listened (sort of)

Shortly before the campaign launched, the visuals and messages were circulated to CTC for comment. We raised some immediate points - such as that the advice to motorists suggested that when overtaking cyclists they leave "only a car's width", and the advice on ASLs which suggested that people 'avoid' driving in them. Driving into an ASL when the light is amber or red is an offence under s36 of the Road Traffic Act 1988, potentially making drivers in them subject to a £1000 fine and three points on their licence. Only suggesting to drivers that they 'avoid' doing that is poor legal advice. 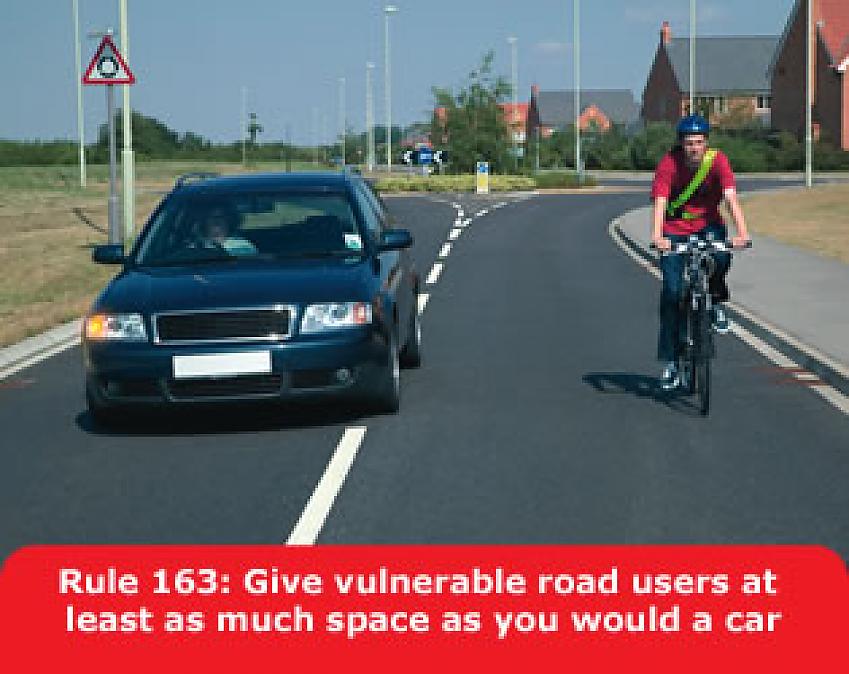 To their credit, the officials at the DfT changed the wording of the former to align it with the more sensible - though far from perfect - line taken in the Highway Code, which suggests that drivers 'give cyclists at least as much space as you would a car'.

To recommend - as the website originally said - overtaking and giving only half a car's width means 90cm. I don't suppose many people give just 90cm when overtaking any other cars, except in very slow moving conditions.

The other difference between overtaking another car and overtaking a bicycle is that the speed differential is usually much greater, and therefore the feeling of risk is greater than it would be for similar circumstances if two cars were involved.

Helmets still 'recommended' rather than 'considered'

Much of the recent literature on cycle helmets has shown that their value is often overstated, that the effect of compulsion or promotion could restrain cycle use, and that they lead drivers to take greater risks.

For these reasons, we've been urging the Department for Transport to change its official advice on helmets, and either delete the "you should wear...a helmet" non-mandatory rule that appears in the Highway Code, or replace it with 'consider wearing a helmet'. CTC would like to see this, as well as many other Highway Code rules, altered to reinforce the message to drivers that they owe vulnerable users a duty of care.

I think the Highway Code

I think the Highway Code advice to give a cyclist the distance you would a car when overtaking is very vague. The accompanying photo shows a respectable clearance but many motorists would squeeze through a lot closer if the raods were narrow.