Government predicts cycling will FALL by 2040

Will cycling fall over the next few decades? The Government thinks so.
By Chris Peck
Tuesday, 5 November 2013

Government predicts cycling will FALL by 2040

While the Get Britain Cycling report calls on Government to aim for 10% of trips by 2025 and 25% of trips by 2050, in the bowels of the Department for Transport, technicians working on the National Transport Model are forecasting that cycling will fall for decades to come.

Traffic modelling - the act of forecasting how much additional traffic there will be in future - is a dark art.

Nate Silver's book The Signal and the Noise explains how the problems and challenges with forecasting accurately, and the false policy leads it can send us down, as well as how the proliferation of large datasets and faulty analysis can - in some cases - overwhelm good judgement.

Forecasting transport demand has some of these pitfalls. Policy shifts, technology and changes in social attitude can make a mess of a forecast: the idea that rail passenger numbers would increase by almost 50% as they did in the last decade would have appeared preposterous to some observers in previous decades, when the railways were in steep decline.

What is the National Transport Model?

The National Transport Model (NTM) examines what the potential demand for transport might be given rising population, greater future prosperity, changing age gradient in society, and other, external factors, such as the relative price of oil. Various assumptions are built into the model, such as the fact that motor vehicles will become more efficient (and therefore cheaper to run), while as people get richer (the modellers are optimistic!) they will spend more of their disposable income on transport, particularly motoring.

All told, the NTM 'predicts' a 43% increase in levels of car use by 2040. But, crucially, the modellers say that this assumes "no change in government policy beyond that already announced."

The problem, however, is that although the NTM is only supposed to be a guide to what might happen, it is treated by policy makers as the inevitable outcome that we must plan for.

This is the 'predict and provide' approach that, in essence, is a self-fulfilling prophecy: your model predicts that car use will continue untrammelled, and further predicts huge congestion problems that might result. So, in order to prevent that congestion, you build new roads and plan new developments around everyone driving for 2/3rds of their trips and, decades later, hey presto: that's what happens!

The current iteration of the model takes account of the huge investment in road capacity announced by the Chancellor in the budget and therefore completes the circle: not only had the model previously forecast the growth in traffic, that growth is now catered for and is even more likely therefore to happen.

Meanwhile, the Highways Agency is using the threatened increase in motor traffic and congestion as part of the evidence behind proposing capacity increases in the major road network in England over the following decades. At a recent stakeholder events, the Highways Agency plastered the walls with colourful maps claiming that traffic on the motorways would be creeping along at walking pace for much of the day if we did nothing.

So what does this have to do with cycling?

The NTM doesn't just look at demand for cars - all modes are considered, including cycling. Just as high predicted use of cars would lead to capacity improvements on the road network, if government had confidence that cycling would take a much bigger share of trips in future it might be more persuaded to support infrastructure to allow that growth to happen.

We first noticed that something strange was happening with the NTM when, last year, a document was published by the Department for Transport which showed that cycle trip length would fall between now and 2035, whereas car trip lengths would continue to grow - see below. 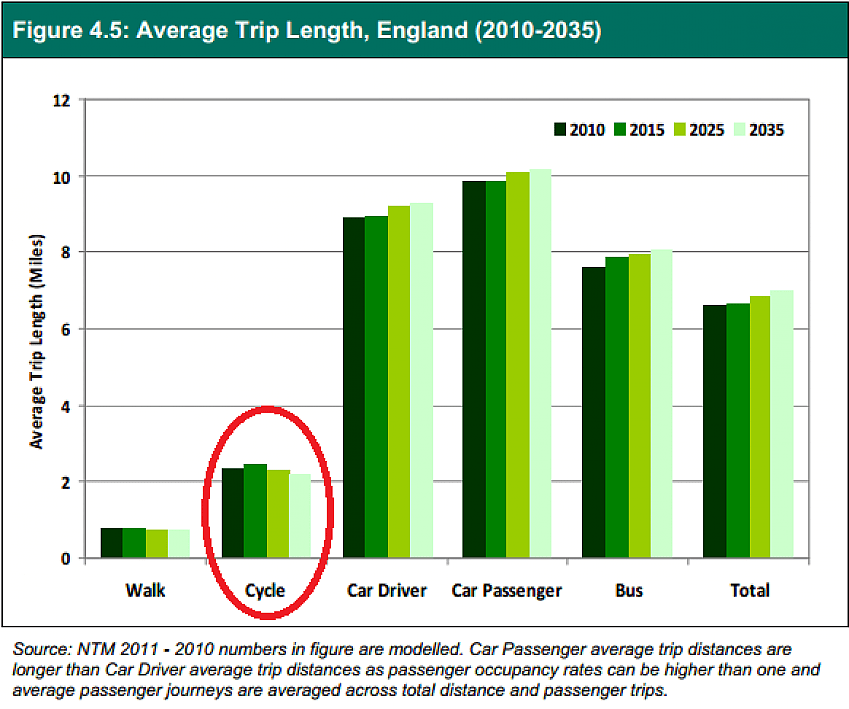 This defies recent changes in trip length which have seen cycle trips increase by 50% (2.2 miles to 3.3 miles) over the last ten years, whereas car trips remain unchanged in length (8.4 miles long average) - see below. 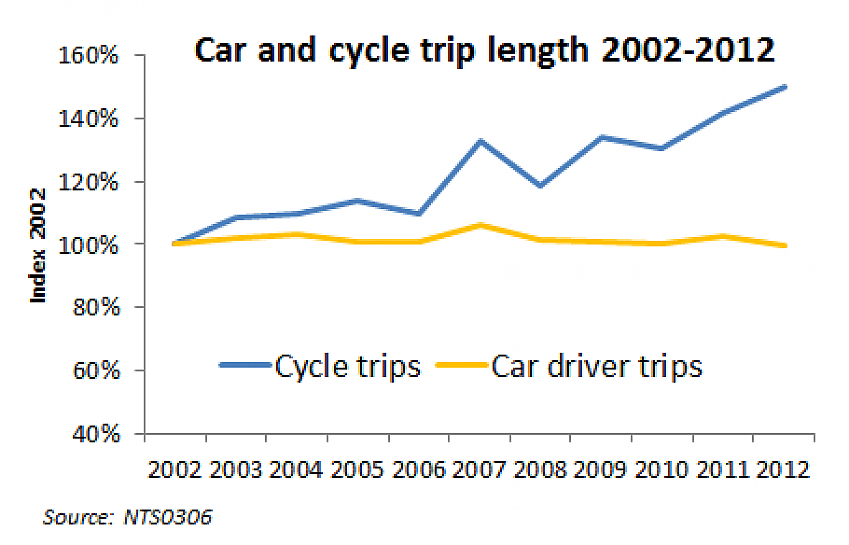 This incongruity led to us asking questions about how the NTM dealt with cycling. Last week, Julian Huppert MP, the chair of the All Party Cycling Group, obtained an answer in parliament which established how much cycling the National Transport Model forecast for each 5 year period up to 2040.

The result, building on a previous parliamentary answer, is shocking. According to Department for Transport, cycle use is forecast to rise sharply over the next few years, to 3.4bn miles in 2015 (from 2.9bn in 2010) but then gradually fall over the next decade, to just 3bn by 2025, and only a little more in the decade after that. When looked at against the forecast growth in population (around 20% by 2040), it looks even worse: by this measure the forecast suggests that the average person's cycle mileage will be 12% lower in 2030, with 4% fewer trips. 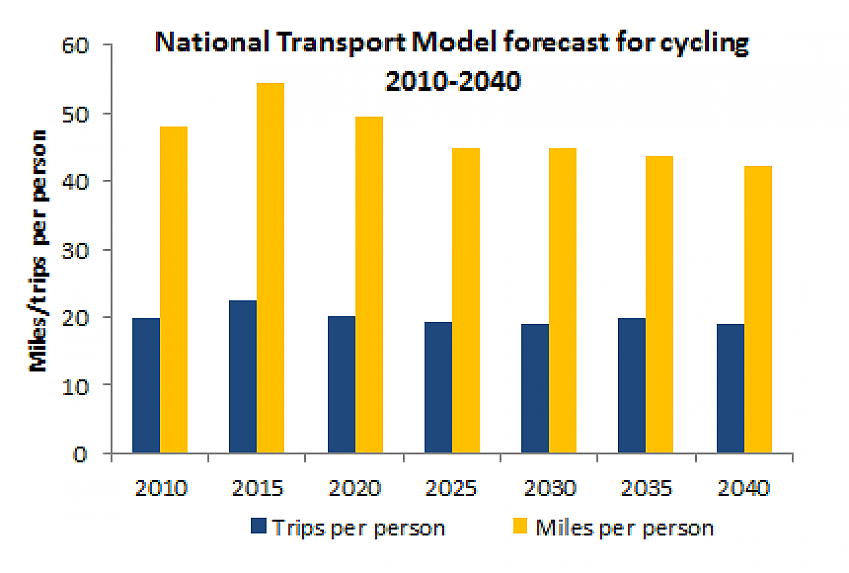 Not only has the Department for Transport utterly ditched the Get Britain Cycling idea of a 10% of trips by 2025 target, they seem to acknowledge that current cycling policy will lead to a long term decline in cycle use.

This in turn may mean that the Department is less inclined to put in the £10 per head required to reach the target, which will mean that we definitely won't get close to 10% by 2025. They are, in effect, planning to fail.

We've not had a chance to talk to the Department directly about their reasons yet - but I suspect that their argument would be that this reduction is forecast because of changing demographics: the population is going to age significantly over the next 30 years, and older people tend to cycle less.

There are currently 4.8m people over the age of 75; by 2040 the Government think that will have doubled, to 10m, and people at that age cycle 4 times less than average.

However, I still think that the model has some problems which are badly underplaying the potential for cycling to increase. Of these issues, the biggest is perhaps the role of electric bikes; particularly for older people. In the Netherlands, electric bikes make up 14% of the total market: 178,000 units a year, and most are sold to older people so they can keep on cycling into older age. Older people are also more likely to be more active in the future, and could be cycling considerably more than that age group do presently.

Furthermore, the model seems to be ignoring recent changes, and the baseline data it uses for cycling is plain wrong. From 2002 to 2012:

London proves it to be flawed

In its most recent forecast, the Department's team explain that their previous assessment claimed that there would only be a 1.5% fall in car traffic in London; the actual result was a far greater fall of 7.8%. The DfT attributes this massive miss to "short-term model error"; essentially failing to account for the fact that the congestion charge and huge investment in public transport capacity had turned around transport behaviour in London in a relatively short period.

If they can get it so wrong in London, the estimates of the rest of the country could be equally rotten. With cycling growing - and growing fast - and car use stagnant or declining, the NTM's continuing assumption of ever increasing motor traffic looks backward and in need of fundamental overhaul.

Not only are young people abandoning cars, technological change will also shift behaviour: video conferencing has long been pushed and is slowly percolating into business life, but the growth of high speed mobile computing will mean that more people will want to spend their time on public transport using their 4G gadgets rather than behind the wheel for longer journeys.

We'll be lobbying the Department to look at their cycling data again and to run a model scenario in which we reach the Get Britain Cycling goal: 10% of trips by 2025 would mean millions of short car trips removed from the road network, with benefits for congestion, for air pollution, and for the health of the population.