Vienna's huge central Ringstrasse has space for all modes of transport
By Chris Peck
Monday, 17 June 2013

Chris Peck spent a week in Vienna at Velo-City, the biggest international conference on cycle planning and promotion, alongside 1,400 other delegates from dozens of countries. Here are his first impressions of the city and its plans for cycling.

As a city, Vienna is pretty good for cycling – indeed, anyone used to cycling in British cities would find it far superior to virtually any here.

Unfortunately for Vienna, though, it also possesses a road and public transport network that are superb, uncongested and – in the case of the latter – astonishingly cheap: the Viennese pay just 365 Euros a year for a season ticket which gives them access to six underground (U-bahn) lines covering the whole city, surface trains (S-bahn) to the outer suburbs, Europe’s biggest tram network and of course buses.

It is the ease of alternatives that explains why cycling languishes (relatively speaking) at just 6% or so of trips within the city. The administration wants to raise that to 10% by 2025, while reducing the modal share for motor traffic from an already low 27% to just 20%. Walking (currently 28%) and public transport (37%) will each need to secure slight increases in modal share.

These changes are highly ambitious – but setting a substantial target to reduce motor traffic (in effect by 25%) is crucial to give a backbone to any policy to achieve modal shift. These targets are even more challenging when you realise that Vienna's population, currently 1.7m, is set to rise to around 2m over the same period. 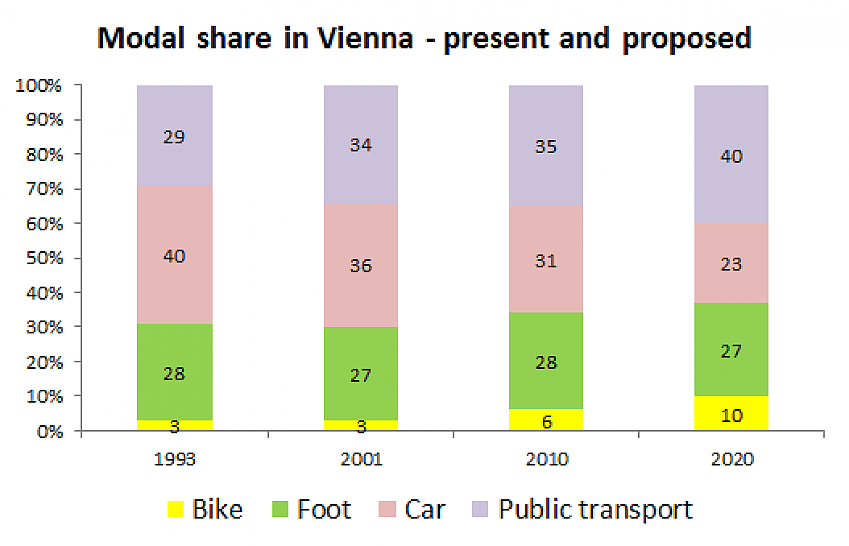 A Red-Green coalition in action

When explaining our vision for how to reach ‘Cycletopia’, CTC emphasises the obvious, but utterly crucial, importance of political leadership to push the changes needed to achieve growth in cycling.

Transport in Vienna is the responsibility of an extremely impressive Deputy Mayor, Maria Vassilakou, who represents the Green Party, which runs the city government in alliance with the Social Democrats. It is she who has accelerated expenditure on cycling, who brought Velo-city to Vienna, and turned the conference into a ‘Radwoche’ (bike week) for the whole city.

I spoke to a few Viennese on the streets before and after the conference and all knew it was happening. Adverts were running on all the advertising screens in stations, trains and trams to build awareness and there was a permanent bike fair outside the conference venue all week. On one night of the conference, many of the biggest roads, including a 6-lane-wide bridge over the Danube, were closed to allow 4,000 of us to cycle round the city in celebration.

Trams – not a cyclist’s friend

It seems churlish to blame public transport for cycling’s relatively low share of trips. Many of those at Velo-city made the point that cycling can and should work well with public transport, speeding up door-to-door journeys and massively increasingly the reach of trains beyond the distance the majority of people are prepared to walk on a daily basis.

Vienna’s tubes and trains are, in fact, a model of how public transport can be better integrated with cycling. To the amazement of anyone used to the institutional hatred of bikes from many British rail operators, Vienna’s S and U-bahn network allows anyone to take a bike on the trains even during the morning peak - while the trains themselves are clearly marked (see right). 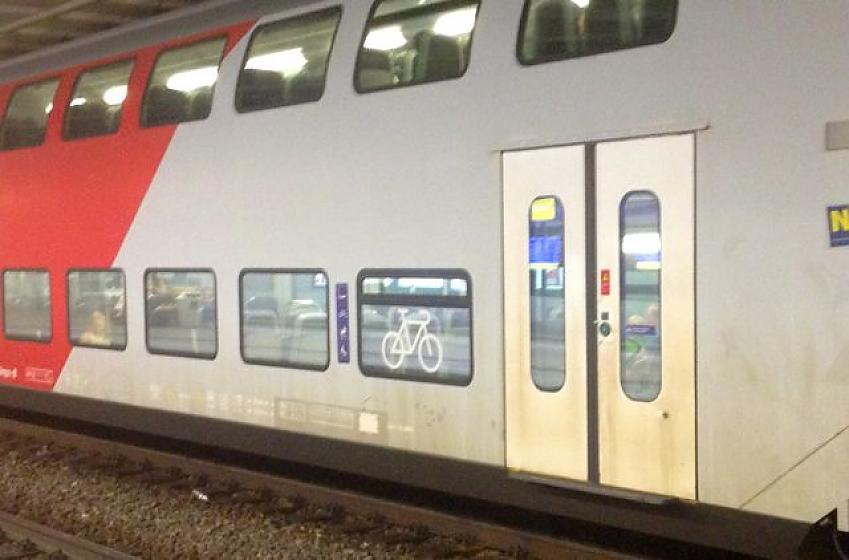 The U-bahn trains are only off-limits to bikes during the late afternoon, but even then I occasionally saw people taking their bikes on them. This is possible because trains are – from someone used to British public transport loadings – virtually empty, even in rush hour. Again, this is not because it is expensive, dirty, dangerous or infrequent – quite the reverse: it is simply because there is huge capacity relative to demand.

However, it is a different story when it comes to trams. Unlike many other European cities, Vienna never got very far with the destruction of their tram network during the motor-mad 1960s, and a huge network still exists. Carriage of bikes on narrow tram vehicles is, as campaigners in Britain find, rather harder to accomplish successfully. I did see people carrying bikes onto them, but they did look a little sheepish about it.

Worse though, is that the trams run on such a fine, on-street network, with stops every few hundred yards. This means that they are less likely to require cycle access in the same way that a faster, but less frequently stopping S or U-bahn train might. 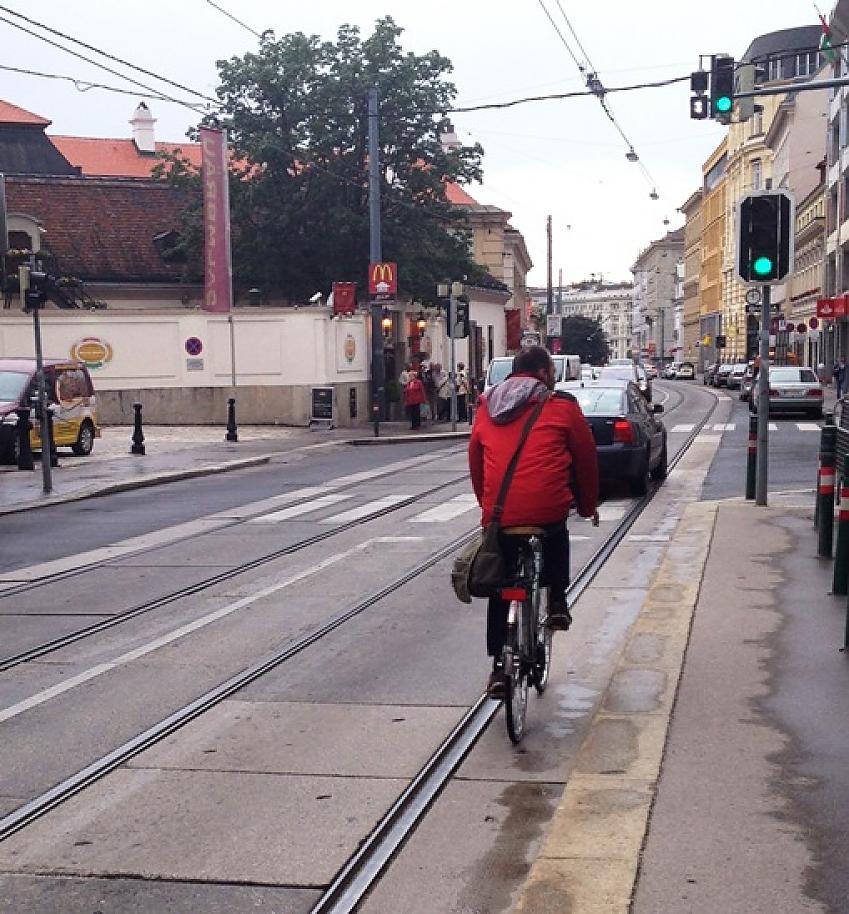 Worse still, those on-street tracks present a real danger to cyclists, as well as requiring, in many places, dedicated provision that squeezes the room left for cyclists to a minimum.

However, this is less of a problem on the giant (80 m+ wide) boulevards of central Vienna, which were built in the late 19th century and can accommodate every mode very adequately.

On the narrower radial routes through the suburbs, it is a different matter. In many, the tram tracks run smack down the middle of the street, with sometimes just 50-70cms on the inside between rail and kerb/parking. Most people seemed to be making their way down this stretch - but perilously.

The city knows that tram tracks are a problem for cycles. One of these radial roads, Thaliastraße, in the west of Vienna is typical, with two lanes of parking and central tram-tracks (shared with other traffic). It is not a relaxing ride. Not only are the tracks themselves hazardous, the concrete seams alongside the tracks are spaced to catch narrow wheels while the modular concrete blocks that surround the tracks make for an uncomfortable ride.

The solution adopted by the city is to turn a parallel back street – Hasnerstraße – into a high quality, priority route for cyclists, with measures to restrict traffic and yield markings to give clear priority to cyclists, an approach known as a Fahrradstraße, or ‘Cycle Street’.

This is classic ‘filtered permeability’ in action: close off parts of the network to motor traffic, but allow cyclists preferential access. The alternative route has the further benefit of having virtually no traffic signals along its entire length – in contrast to the major road. 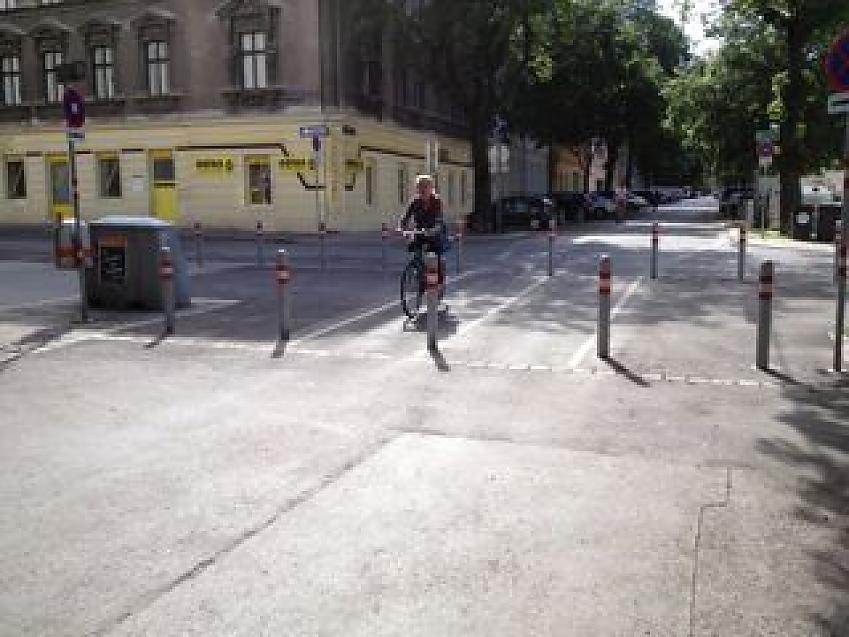 In the US, similar approaches are appearing in the form of  ‘Bicycle Boulevards’. Such a system works relatively well where there is a strict grid network and parallel roads take you more or less to the same place as a parallel major road. It is less successful in British towns and streets where the main road is the shortest, most direct route and parallels tend to be fiddly, illegible alternatives which are, literally ‘round the houses’.

Another problem for cyclists trying to pass through central Vienna is the historic core of the city. A very large proportion of the centre is heavily traffic-calmed or fully pedestrianised, with huge flows of tourists and shoppers. On many of the picturesque streets surrounding this pedestrianised area run the prescribed routes of dozens of tourist-trap horse carriages – known as Fiaker.

The next best (most direct) route running north-south through the city avoids the pedestrianised area, but passes along a very narrow set of streets and the entrance to the biggest tourist attraction in Vienna. Consequently, it heaves with traffic and slow-moving Fiaker. In Britain, horses turn the surfaces of bridleways into quagmires; in Vienna, the grinding action of hooves on cobbles makes them practically unrideable.

Elsewhere, the reluctance to remove private car parking means that this key cycle route is far worse than it should be – though it is still far superior to the routes with similar importance in British cities.

In a workshop held during the conference, architects and advocates discussed these issues and the problems of trying to balance the needs of cyclists (a smooth, asphalt surface and minimal conflicts with other road users) and the importance of retaining a historical texture of street surfacing and accommodating the tourist trade.

Continuity – even when narrow

Apart from the problems listed above, Vienna has provided some brilliant infrastructure for cyclists, particularly alongside the waterways: the Danube Canal that cuts through the centre of the city, and the multiple channels of the Danube itself.

A massive flood defence plan in the 1970s to dig a new channel involved creating a vast island over 20 kilometres long, but only a hundred or so metres wide. This island provides a peaceful, virtually car-free cycling environment, as well as being dotted with restaurants, cafes and – as in the rest of Vienna – public drinking fountains.

Every major road and most of the rail bridges have dedicated, wide cycle paths, and in some places new bridges have been built to connect up routes, crossing the major road system. At one U-bahn station, three wide aerial cycleways (see right) now join together, linking cycle paths and communities and linking in to the public transport network. 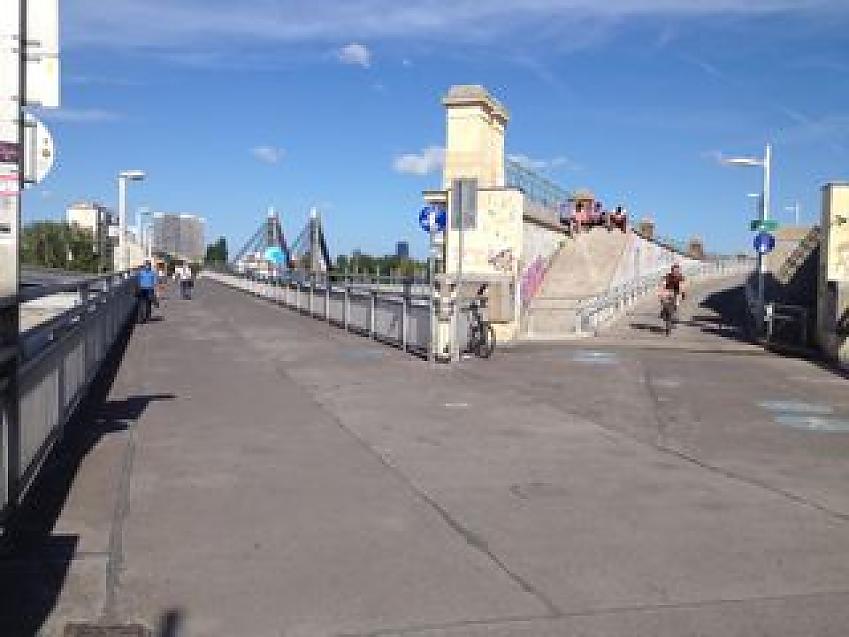 Even though many of the cycle paths were of a fairly low standard (narrow, a bit fiddly), there was a sense of continuity and consistency of approach. There was less of the, ‘oh-we-give-up-try-and-cross-here-as-best-you-can’ attitude that one suspects some British traffic engineers end up taking (often through necessity).

Altogether, Vienna is a city in which it's good to be a cyclist - but it's equally very easy to drive, and very simple and cheap to take the seamlessly integrated public transport.

By trying to inspire a culture of cycling – through events like Velo-city – Vienna hopes to be able to sustain the growth in cycling and thereby reduce the potential for congestion as the city itself expands.

The Viennese are also rightly proud of the liveability of their city and they have grasped - as many cities in the UK are doing - that a city that is good for cycling is good for living. They've realised that having conditions conducive to cycling are required to attract the young, dynamic population required to sustain an economy based on creativity and innovation.