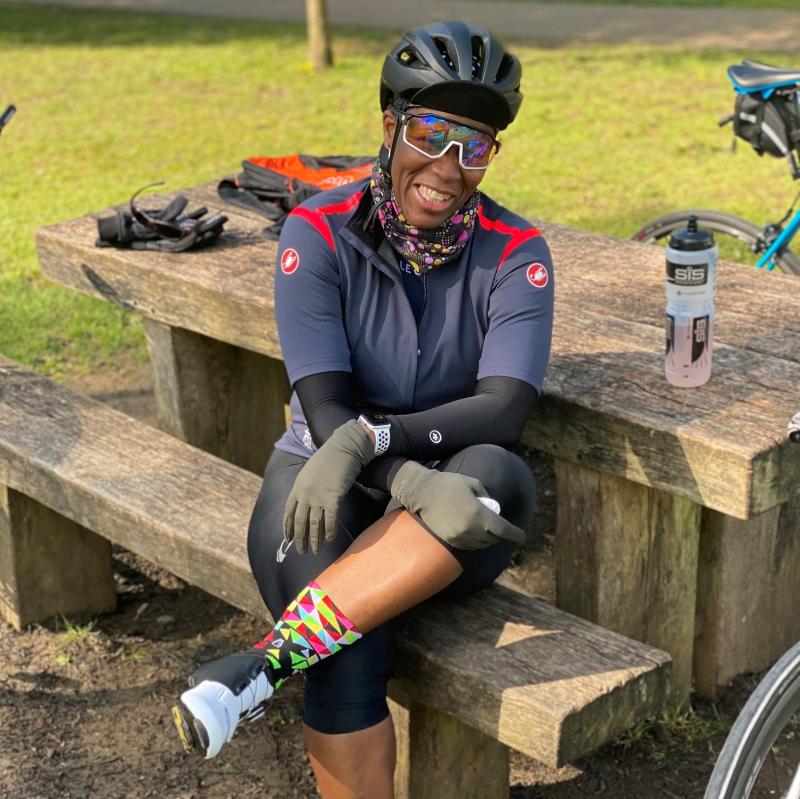 Rhoma taught herself to ride age 13, but didn't own a bike until she began to commute at 25. Sibling persuasion made her buy a road bike and she hasn't looked back. She joined Le Collectif CC and the Black Cyclists Network (BCN) and felt at home where she had the opportunity to cycle with people of colour. Rhoma now leads outdoor and virtual rides, nurturing the women's BCN group.

"I taught myself how to ride a bike at age 13 as my friends where teasing me about not being able to ride a bike. But I didn’t own a bike (hybrid) until I was about 25 years old which I used to commute to work only. A few years later my brother (a keen cyclist) persuaded me to get a road bike and I haven’t looked back since.

"I joined various cycling clubs but there was always something missing. However upon joining Le Collectif I found the culture to be totally different. Having the opportunity to cycle with people of colour has been an amazing experience and leading virtual rides on Zwift has taken me out of my comfort zone which has taken my fitness to another level."

Rhoma Erekpaine was nominated for the 100 Women in Cycling by Aman Khan who said:

"Rhoma is always there to help whether it is an online Zwift ride or an outdoor club ride. She is always motivating riders to keep going and to never give up. She always pushes herself to show others within the community that, if you put the effort in, you can do it. Rhoma recently took part in an online race and shared her experiences with the club. Other female riders within the club, after listening to Rhoma, also took part in a race in the following weeks. Rhoma is an inspiration to me and I wish to learn all I can from her."

She always pushes herself to show others within the community that, if you put the effort in, you can do it.

Rhoma was also nominated by Shareen Miller who said: "When I got back into cycling after years, it was like I had to learn all over again. I wanted to find a group where I didn’t feel intimated. I immediately felt comfortable riding with Rhoma.

"She does so much to encourage women’s riding. Rhoma made me believe I could be better after riding with her just once! She has a way of seeing the best in you before you see it yourself. She has an encouraging and nurturing style which helps you to give your all and your best in her presence."