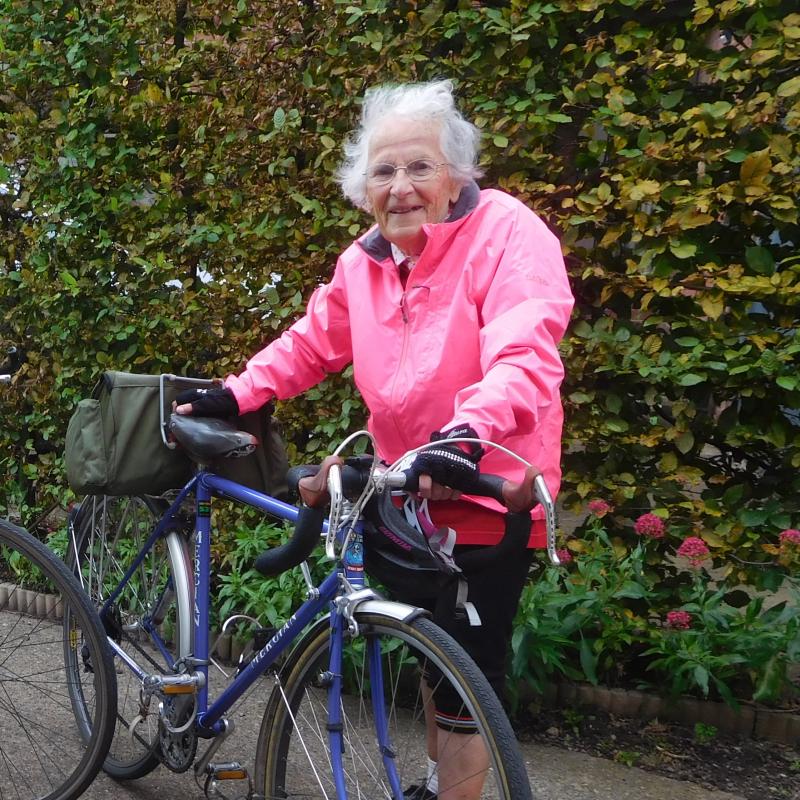 In 70 years of cycling Jean has had numerous adventures; surprises; disappointments and friendships. Jean’s first husband, who was a keen cyclist, died when Jean was only 35, leaving her with two young girls to care for.

At 85 years old she’s still cycling and showing others the happiness, fun and adventure you can have on a bike.

“I only cycle short distances these days, so I live on the memories of my cycling adventures which span 70 years.

“I joined the CTC (now Cycling UK) in April 1950 when I was 15. I rode with the Social Section each Sunday and the others soon taught me how to ride safely in a group; how high my saddle should be; what I needed to carry in my saddlebag; what sprinting for the 30s meant; what to call out on the rare occasions when you saw a car approaching, oh such a lot of things became automatic and still are.

“I must have learnt a lot about bike maintenance from the group and I have always been able to sort out most problems.

“In the 1950s I cycled with a girl friend from Hull to Wembley Stadium to watch England Ladies playing hockey. Unfortunately, poor organisation and immaturity let us down and we only saw the final 15 minutes of the match! It didn’t put me off though, it just made me plan more efficiently.

“In 1957 I married John, who was also a keen cyclist. We went on several CTC tours but on our final tour together, the two of us went to Switzerland. The highlight was taking the bikes over the Gemmi Pass; it was very strenuous and regarded as an achievement.

“In 1969 I was proud to be the winner of the ladies' prize in the National Final of the CTC British Cycle Tourist Competition.

“However, I decided that my love for cycling was too great to let that stop me. With my youngest on a junior back tandem and my eldest on her solo, off we went! Summer holidays were spent exploring the countryside, staying at youth hostels and showing the girls the wonderful places in Yorkshire I cycled around growing up. Once I even took them camping in Brittany.

“When the girls were older and doing their own thing they thought it was time that I went touring without them, so I enrolled on a CTC tour in Ireland. Despite not knowing anyone else, I decided to go. This was the start of the next adventure in my life.

“The following year I organised a CTC tour myself, this time to the Black Forest. I met many wonderful people, including my future husband and both my future sons-in-law!

I think that I must have had a way of leading tours that people liked, as some returned year after year

“I think that I must have had a way of leading tours that people liked, as some returned year after year. In all, I led nine tours for the CTC. This was something I really enjoyed, combining organising, using French, German and cycling.

“I hope that my story is an inspiration to other women cyclists. Don’t let difficulties stand in your way, have confidence and, like me, you’ll have a wonderful life on a bike.”

You can read more about Jean in the February/March 2020 edition of Cycle magazine when she was interviewed by Cycle editor Dan Joyce, who nominated Jean for the 100 Women in Cycling.