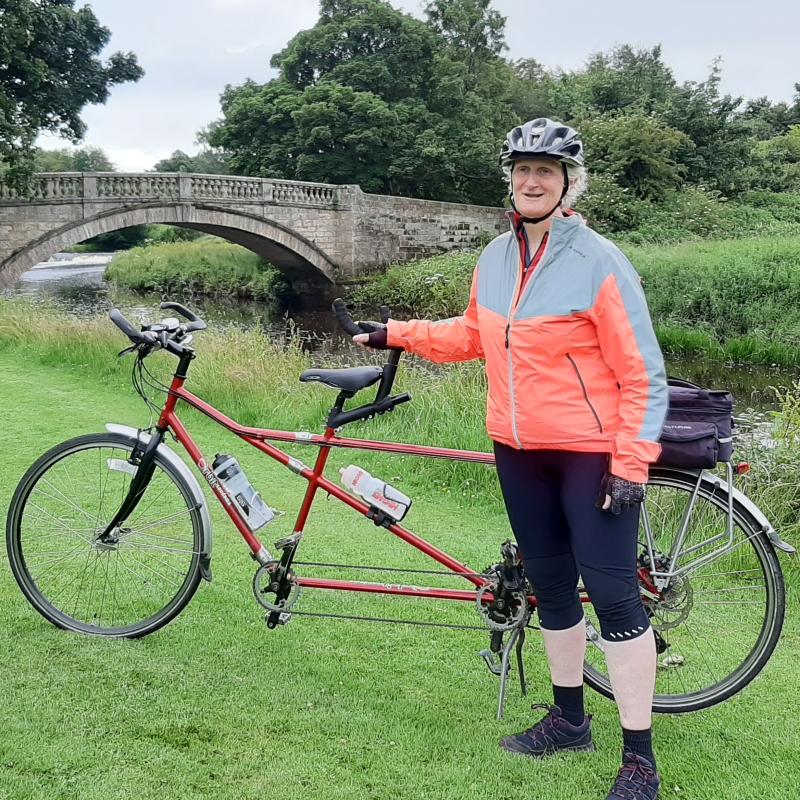 Co-founder of the Glasgow Tandem Club

After catching the cycling bug on a tandem holiday for blind and partially sighted people, Anne Fraser has made it her mission to help more people feel the exhilaration of cycling. She co-founded a tandem group in Glasgow, and worked tirelessly to organise, lobby for funding, find support and encourage new riders.

“I’m registered blind and I have been for the best part of my life, but I wasn’t born with a vision impairment. I have a progressive deteriorating eyesight condition which means that cycling on my own is a non-starter.

Anne was first introduced to tandem cycling about 20 years ago when she was in her mid-30s. She saw an advert from a charity for blind and partially sighted people offering a cycling holiday around Normandy and decided to give it a go.

“As soon as I was on the bike, although I was petrified I was also at the same time thrilled. It was thrilling and scary and frightening in equal measure.

What I like about it is when I’m on the back of the tandem nobody knows or needs to know whether I can see. It’s not necessary for me to see to enjoy cycling. It’s the feeling of complete freedom and independence and just feeling that there are no barriers whatsoever

“What I like about it is when I’m on the back of the tandem nobody knows or needs to know whether I can see. It’s not necessary for me to see to enjoy cycling. It’s the feeling of complete freedom and independence and just feeling that there are no barriers whatsoever. I can take part, I can participate like everybody else and when the two of us are on the tandem we’re just a team. Cycling makes me feel for once, not vulnerable, not disabled, just there as a key member of the team.

“I’ve been hooked ever since.

“After that first holiday, I tried to get on as many of those types of holidays as I could, but they were very popular, so I decided to buy my own tandem. I did that about 12 years ago.

“I bought the tandem and set about trying to advertise for pilots. One of the people who I managed to recruit was Diane.

“A few years after that, Diane and I had been talking about how it would be great if we had a group. I joined a group in Fife (the first for sight-impaired people in Scotland), Talking Tandems. I joined them about eight or nine years ago.

“That’s how keen I was to cycle. I’d go all the way to Fife just to go out for a cycle.

“Then about three years ago, through the Big Bike Revival and RNIB Scotland we finally got a group up and running.

“It’s really been a joint effort between me and Diane and she’s forever thinking of new runs for us to do. Really she’s gone over and above, a lot of her spare time is given to the group. She has been fantastic, she keeps things going.” 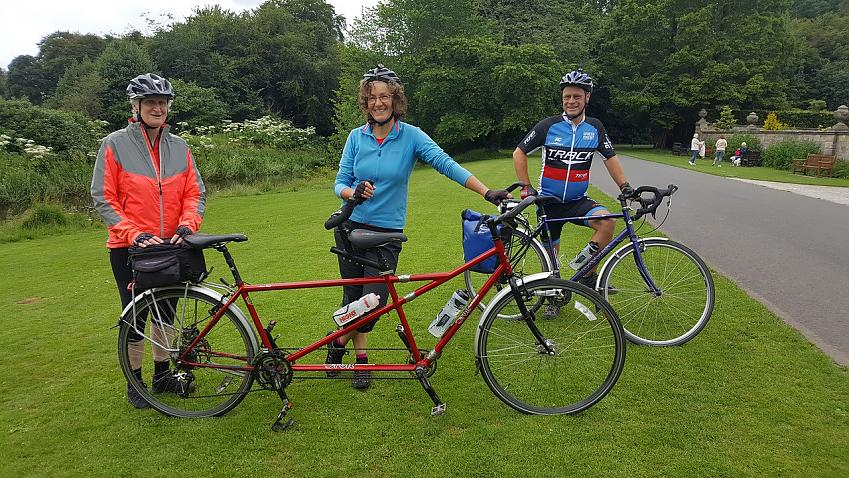 From left: Anne Fraser, Diane Lusman and her partner Martin

“We have our own tandems now courtesy of Cycling UK and funding from RS Macdonald.

“The Glasgow Cycling UK group have also continued to support us in all sorts of ways, be it through lots of pilots coming forward and bits of funding to keep us going.

“Bike for Good have also been excellent to us. They do the maintenance on our tandems free of charge. They’ve done one maintenance programme for some of our pilots and there’s going to be be a rolling programme. They also have big vans that we can use from time to time to transport the tandems to different locations so that we don’t have to stay all the time in the park.

“We’re always looking for experienced cyclists who are able and willing to come on board and train up as a pilot and just help us expand even further. It would be great if we could get more tandems.

“It would be good to get more blind and partially sighted people cycling because they need to enjoy what I enjoy. Once you’re hooked you’re hooked.

If you want to volunteer as a tandem rider visit their page and get in touch.

Anne was nominated for the 100 Women in Cycling by her tandem pilot Diane Lusman who said:

“Anne is a visually impaired cyclist who wanted to help others experience the benefits of tandem cycling that she has enjoyed. Although tandem groups exist in other parts of the country, there were none in her home area of the West of Scotland.

“Anne set about changing this and from beginnings in late 2018 with taster sessions supported by the Big Bike Revival, is now leading a tandem cycling group for visually impaired cyclists based in the West of Scotland.

“This has been achieved entirely in a voluntary capacity with lots of hard work making contacts and developing links with local cycling charities. It's involved training local cyclists including many Glasgow Cycling UK members to become tandem pilots and making the contacts with other visually impaired cyclists who have been keen to become stokers.

“Over the past year the group has had group rides every month, initially on local cycle paths but later on roads as well, the longest run to date having been 30 miles. Our pilots and stokers have developed in competence and confidence. In response to Anne's efforts the group was awarded funding from Cycling UK to purchase four new tandems in the summer of last year.

“One of the most difficult tasks was to find a base for the group with storage for tandems and Anne worked tirelessly to make this happen, with the group now having the use of a shipping container in a local park with access to a nearby leisure centre and outdoor velodrome.

It is fair to say that none of this would have happened without her drive, persistence and enthusiasm, and that the vast bulk of the work needed has been done by her.

“There is now a core group of about 10 experienced pilots and eight regular stokers, with more waiting for the chance to develop their piloting and stoking skills.

“Anne has had support from myself and the local Cycling UK group, from RNIB and from other local bike charities but it is fair to say that none of this would have happened without her drive, persistence and enthusiasm, and that the vast bulk of the work needed has been done by her.

"I think the group is fantastic and many have commented on how friendly it is and how much they have enjoyed the rides. Solo cyclists too have been welcomed to support the rides; they too have very much enjoyed the rides. I do feel this group is a great example of inclusivity in practice. I hope that more tandem riders will be able to join in regular Glasgow Cycling UK rides in addition to the specific tandem rides."