Cycling UK continues to support the UK to cycle
This remains true during this difficult period with the ongoing threat of coronavirus Covid-19
Read our latest advice on cycling
The New Forest's many tracks and trails are perfect for cyclist of all ages and abilities - Photo by Peter Cornish
By Thomas Page
Tuesday, 6 August 2019

Former New Forest Cycling Week Secretary Geoff Clark has been presented with a Cycling UK Certificate of Appreciation for his work as the lead organiser of the event that has people returning year after year. Cycling UK's Thomas Page went along to find out what makes it so unique.

Thanks to all the wonderful volunteers who make the week happen

The event is organised and run entirely by volunteers who put in a tremendous amount of work to ensure it can continue year on year, introducing new activities whilst retaining the old favourites.

Former Secretary Geoff Clark has recently stepped down as site organiser after several years and was presented with his Certificate of Appreciation, which he was awarded as a finalist in Cycling UK's Going the Extra Mile Volunteer Awards 2019, at this year's rally. Geoff has been instrumental in organising New Forest Cycling week since 2003.

Cycling UK can't thank Geoff and all the other volunteer ride leaders and activity organisers enough for keeping the week going, enabling many generations to continue enjoying the simple delights of this holiday on wheels year after year.

Thanks also to the support from UK Youth, the charity that owns Avon Tyrell, who ensure that the rally site is kept available for Cycling UK's exclusive use every year.

Some people who are now bringing their children and grandchildren came to the rally themselves as children over 40 years ago!

Geoff says: "We took our kids aged seven and nine years old to the first rally in 1975 and for several years after. In 2007, I started taking my four-year-old grandson and he has been every year up until 2018. He made many friends from coming each year and enjoyed the cycling in the organised daily group rides around the New Forest."

We absolutely love the relaxed atmosphere and now it's among some of the children's happiest memories growing up.

The new Secretary, Anna Russell, adds: "We have been bringing our children since 2003, when my mum encouraged us to start family cycling. My sister brings hers as well, so it's a big family group of three generations plus the friends we've made along the way. We absolutely love the relaxed atmosphere and now it's among some of the children's happiest memories growing up."

David, another member of the committee who organises the rally, has fond memories of attending with his daughter Rachel.

He says: "I started attending the rally again when my daughter Rachel was about three to four years old. I took her out on the back of my bike in a child seat, as she was scared of the trailer bike we had. After going on a few group rides which included some trailer bikes, we came back to the campsite and Rachel wanted to have a go on ours. The first 30 seconds she was a little scared, but others gave words of encouragement to her and soon she was shouting 'Look everyone I am riding!'.

"After that, if we were out on the trailer bike and another one turned up next to us, the children would decide it was a race and told us to cycle faster! Rachel is now in her late twenties and usually attends the end of week BBQ. However, she has said that both she and her boyfriend Chris will join us next year for some riding."

Individuals can also enjoy the camaraderie and renewed friendships of the event, although newcomers are always welcome too.

This holiday is a fantastic opportunity to get to know the New Forest better by bicycle.

Ali Baker from Southampton said, "I have been to the week six years in a row. I love going back every year. It's at such a beautiful place. On arrival day, I look forward to my first ride down the long driveway and looking out for the tree pig near the entrance to our campsite!  This holiday is a fantastic opportunity to get to know the New Forest better by bicycle."

About the New Forest Cycling Week

Founded in 1975 by Peter Knottley, the New Forest Cycling Week is a unique annual cycling and camping event run by Cycling UK volunteers that is perfect for families, couples, groups and singles and cyclists looking for an old-fashioned holiday in a tranquil setting. Attracting hundreds of visitors to the New Forest every year, with some coming from as far as Copenhagen.

Taking place every summer in late July-early August, cyclists of all ages come together for a week of cycling, camping and fun. Set in the charming grounds of Avon Tyrrell Activity Centre near Bransgore in the heart of the New Forest, the rally gives everyone the chance to make the most of their surroundings, be it exploring all the trails and bike paths the New Forest has to offer or simply relaxing on the spacious pitches in front of the stunning Arts and Crafts 'calendar' house of Avon Tyrell. 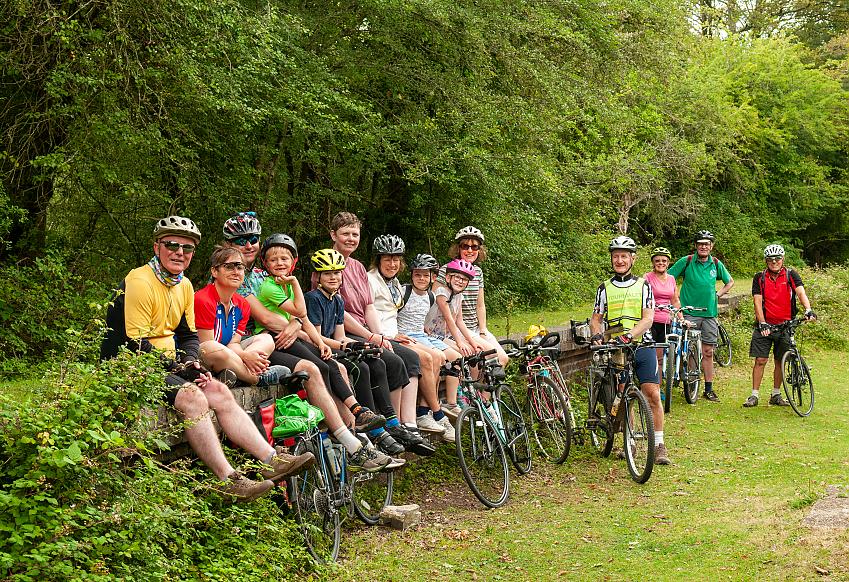 The New Forest Cycling Week brings riders together from all round the country. Photo by Peter Cornish

Rides are organised on a daily basis, with details of what's going on that day found on the blackboards in the central tent. Far from high-tech, this simple method of organisation is all part of the rally's laid-back and inclusive atmosphere. There's usually a choice of pootles of 15 to 30 miles with plenty of chances to stop for kite flying, crabbing and, of course, eating lashings of New Forest ice creams. There's also longer rides to the other side of the forest to visit tourist attractions such as Lepe beach and Exbury Gardens, and a mass ride to Lymington to catch a ferry to the Isle of Wight before returning for fish and chips on the quayside.

Aside from daily rides, most evenings through the week also feature additional activities and opportunities to socialise with fellow campers. These range from a children's time trial around the campsite through to a barn dance, complete with cheese and wine.

The inclusive nature of the event means everyone can get involved, from children on balance bikes to hardy cycle tourers. 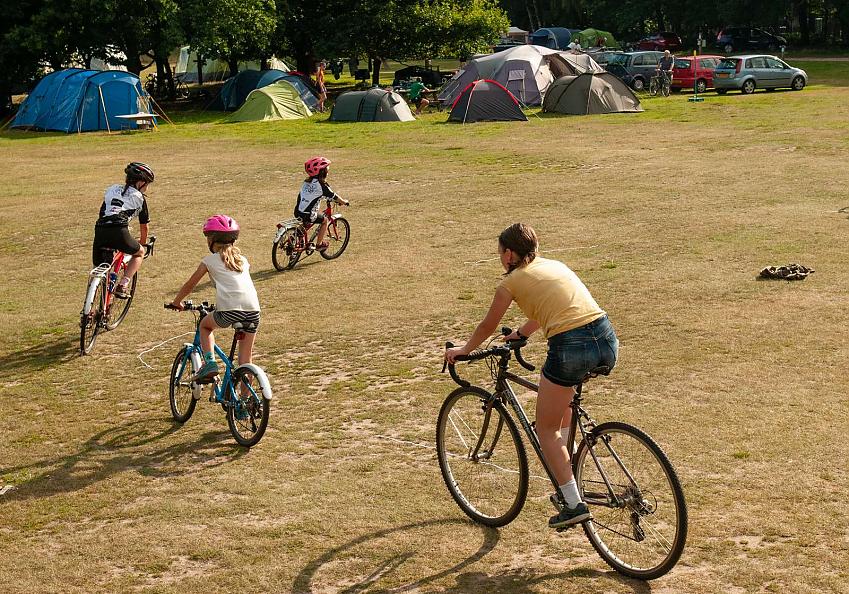 With over 100 miles of car-free approved cycle trails, everyone can feel confident and safe on their bike. Many of these trails link up the picturesque towns and villages of the area, offering plenty of opportunities to stop for a cream tea or other refreshments.

A favourite year after year is Annie's (also known as Acres Down Farm), famous for its pretty garden and generous cake servings.

Other highlights include the Reptile Centre, Canada Memorial and the long winding descent through ancient forests on Ornamental Drive.

Though not often associated with the sea, the New Forest is near to many beautiful beaches, perfect for a rest from cycling. Mudeford, with its long sandy beaches and beach huts, being one of many wonderful destinations for a day trip. 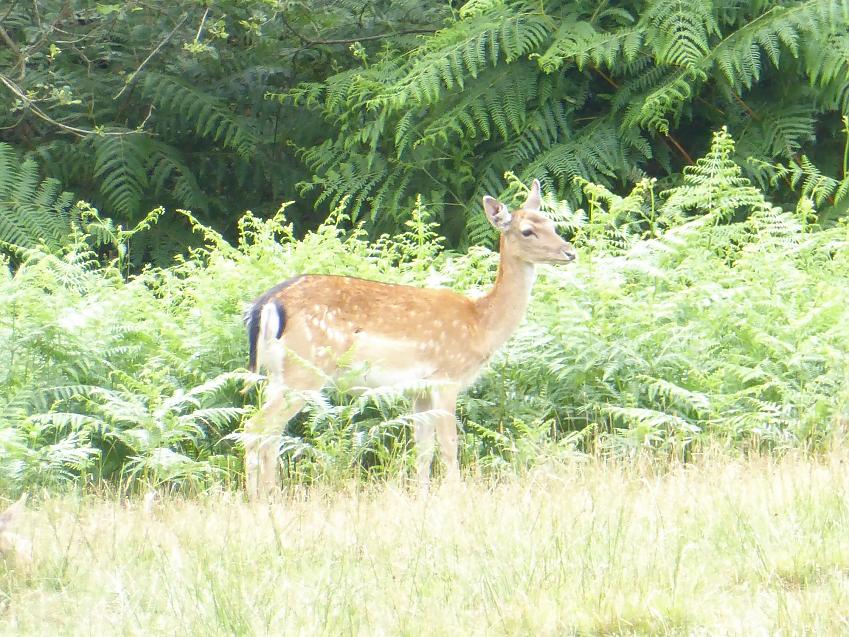 Not actual Bambi but perhaps a close relative? Photo by Marie Cook

As well as the picturesque scenery and visitor attractions of the National Park, cyclists young and old can enjoy the sight of the New Forest's population of wild deer, ponies, donkeys and cattle. Although the latter three species wander freely throughout the forest under ancient Commoners' Rights, they should be only approached with caution as they may not be as friendly as they appear!

The New Forest Cycling Week will be held next year from Saturday 24 July to 1 August at Avon Tyrell Activity Centre. Details of how to register for it will be available in the new year. 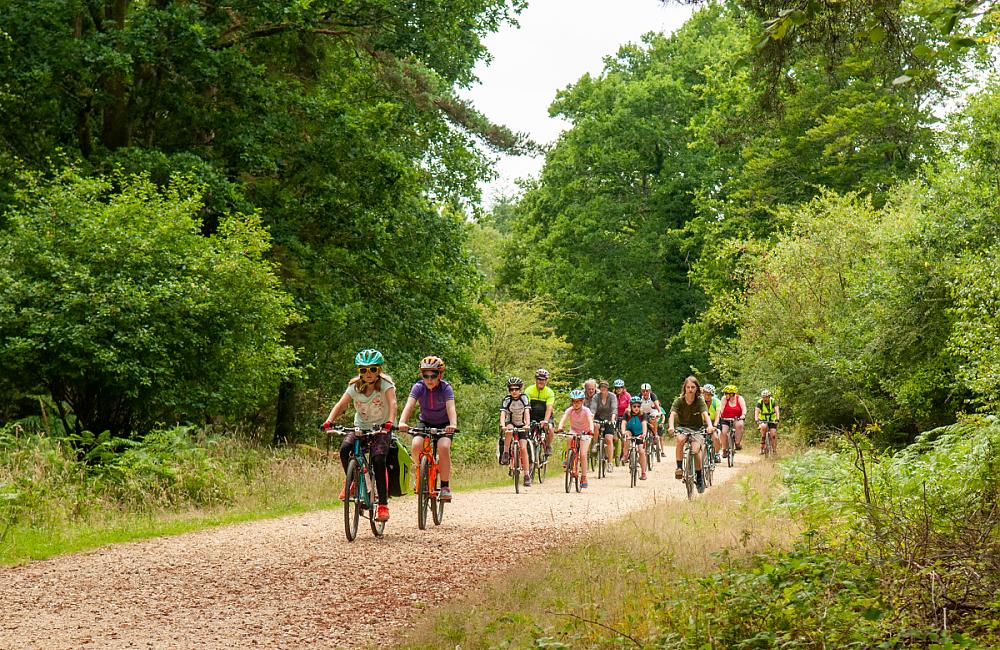 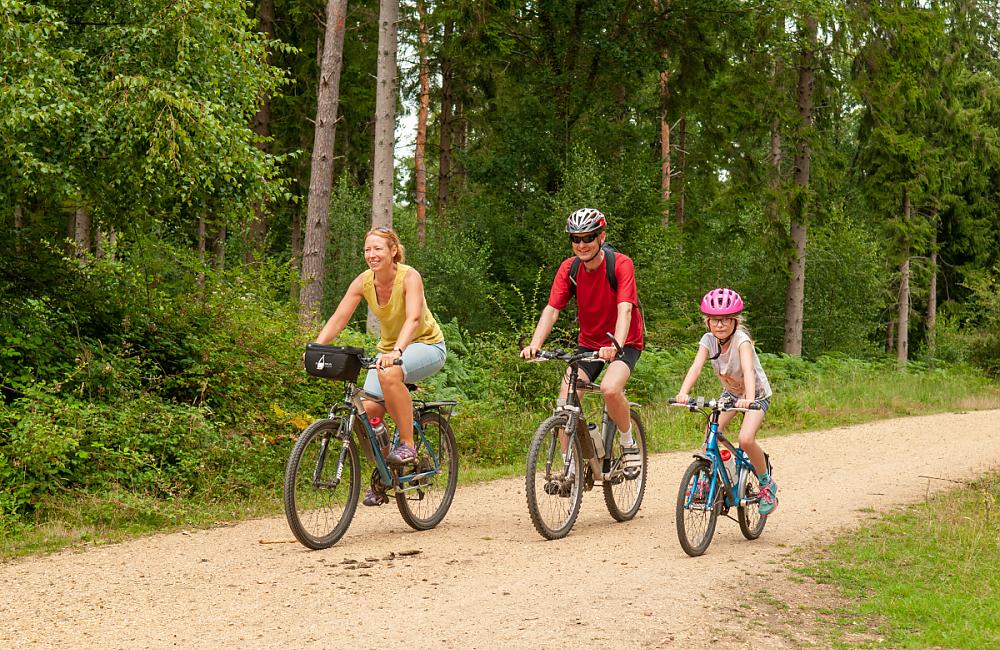 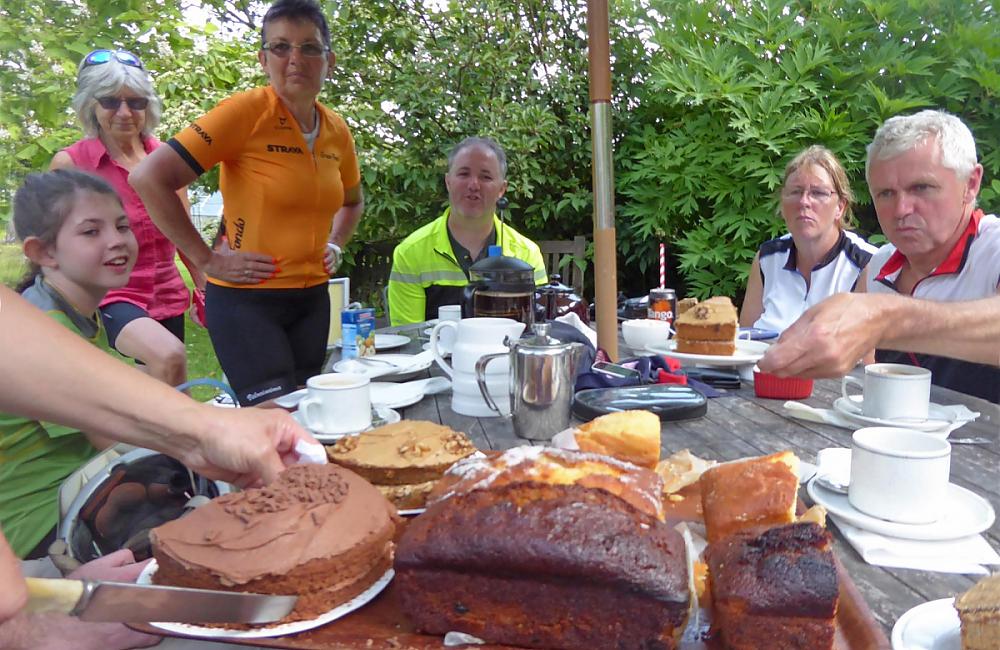 Top tips for enjoying the week

It's not about the kit and the gear and the getting there, it's about the chat and the pep to keep the children moving along, looking out for the horse that's coming along or the next sign.

Keep a bag of sweeties in your pocket until the end of the ride and don't ride one-handed because you could fall off!

Try your hardest and if you have a folding bike make sure it's secure.

A guide to cycling in the New Forest View