Testing out a local leg of the Cathedrals Cycle Route meant visiting two very different cathedrals, crossing some of the finest countryside in the south east, and having the chance to get to know Cycling UK colleagues better

The Cathedrals Cycle Route, which launched at the end of May 2021 to coincide with the beginning of Bike Week, is a grand scheme to link all 42 Church of England cathedrals in a 2,000-mile loop around the country. While the route’s creator, Shaun Cutler, set off from Newcastle in a bid to take the CCR baton around the entire loop in 42 days, a small group of Cycling UK staff marked Bike Week with a more modest ride following the leg from Guildford (home of Cycling UK) to Chichester.

For me, as well as a chance to ride some new trails in the June sunshine, this was an opportunity to get to know a couple of my workmates better. Joining the organisation during the first week of lockdown in March 2020, I had been working remotely from the start and for the most part only seen my colleagues from the neck up on video calls. In keeping with one of this year's #7daysofcycling wellbeing themes, “Well connected”, a social ride would give me a chance to catch up on some of the workplace chat I had missed out on over the past 15 months.

After taking an early train to Guildford station I made my way up Stag Hill to the cathedral to meet my colleagues: Julie, volunteer communications officer (and one of our 100 Women in Cycling last year) and another Rob, our video producer and photographer. 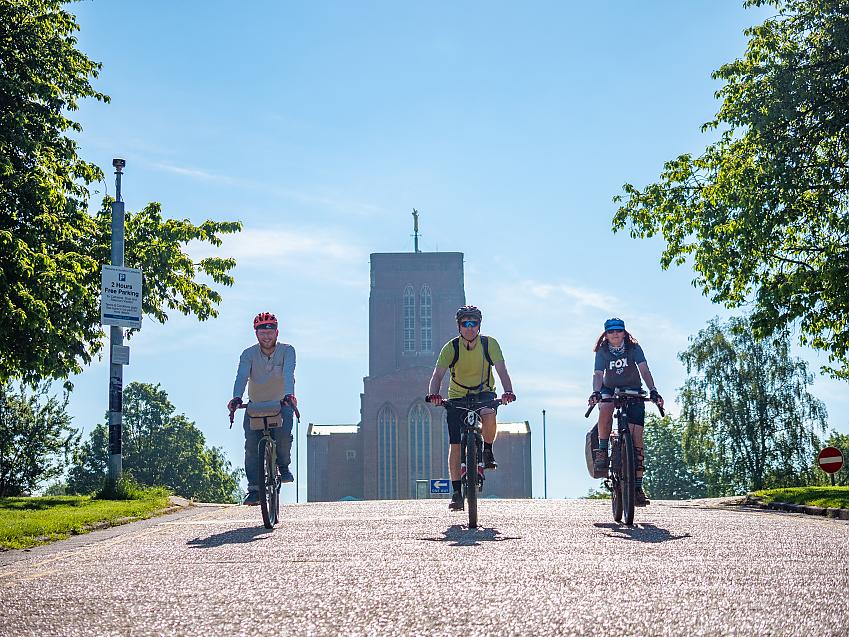 I have lived locally all my life and Guildford’s cathedral is a familiar landmark – as a child, spotting its golden angel statue from the car window meant we were almost at Granny and Grandad’s house – but I had never seen its uncompromising brick bulk up close where you can fully appreciate its scale. When it was designed by Edward Maufe in the 1930s the cathedral was intended to be “a jewel set in an emerald sea”, and while Guildford has grown around and beyond the hill in the 90 years since, there are still fine views to be had – including those of the first obstacle, a mile to the south: The Mount.

The route through town thankfully missed the steepest bottom section of NCN22 which climbs onto this eastern end of the Hog’s Back but it’s still a stiff climb past increasingly impressive detached houses, including one Grand Designs-worthy property under construction, before the road turns to track and levels out. Pausing for breath in the buttercup-studded meadow, we looked down on the cathedral we left a few minutes earlier while Rob directed us for photos.

The official CCR route follows the road downhill, but as we were on mountain and gravel bikes we opted for a bridleway descent which is fast, bumpy and fun, but not without its hazards: fallen trees blocked the way in a couple of spots, and brambles and nettles attacked any exposed flesh. Crossing the North Downs Way on an ancient sunken lane, we trusted in Julie’s local knowledge to avoid the tarmac as far as possible through Compton and Hurtmore. Emerging from the cool and shady (if slightly boggy in places) trails through Eashing Copse, we rejoined the road and crossed the River Wey, still too early to consider a stop at the Stag pub.

At Mousehill Down the rural air is briefly disrupted by the A3 dual carriageway carved out below the lane. For those with road bikes, there is at least a cycle lane beside the main road, but again we chose a quieter alternative route, following a bridleway through the beech woods and skirting Thursley Common before beginning the long climb to the top of the Devil’s Punch Bowl. By now the sun was high in the sky and it was a relief to enter the shady woodland. 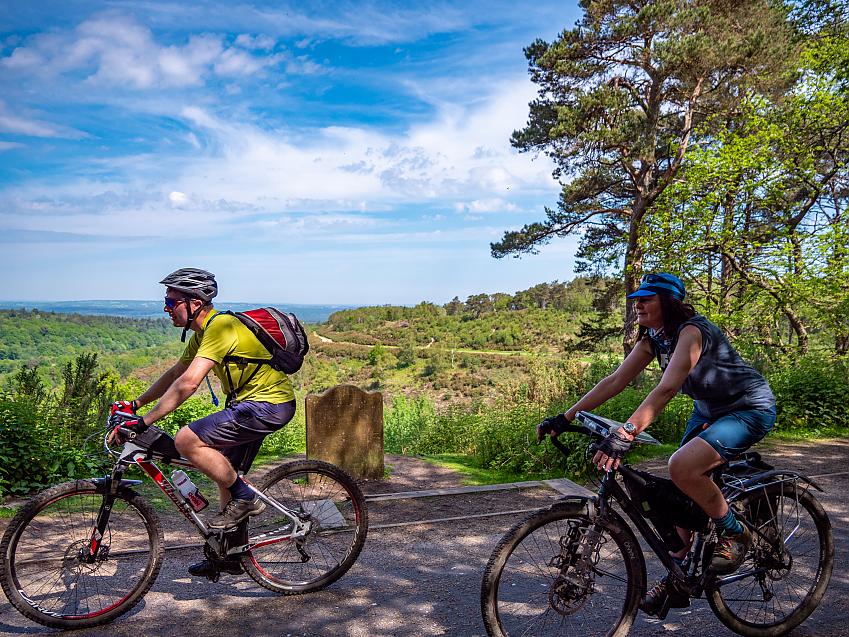 The Punch Bowl is a dramatic scoop out of the landscape which has been transformed for the better by the opening of the Hindhead Tunnel a decade ago: the busy road to the south coast now passes 60 metres beneath your wheels as you approach the summit. As we climbed and puffed and reflected on the toll lockdown had taken on our fitness, conversation turned to the National Trust café at the top. Rumour had it that the car park was being redeveloped and the facilities might be closed. Fortunately those fears were unfounded and we were able to refuel with coffee, pasties and chocolate brownies.

Well rested, we negotiated the busy roads and impatient motorists of Hindhead before a short but unavoidable stretch of shared-use footpath beside the A3. Thankfully this was soon behind us and it was back to quiet lanes and then another bridleway that plunges off Hewshott Lane beneath an old stone bridge. A mountain bike was definitely an advantage for this steep and rocky trail – especially as Rob insisted we stop and climb back up towards him for photos. 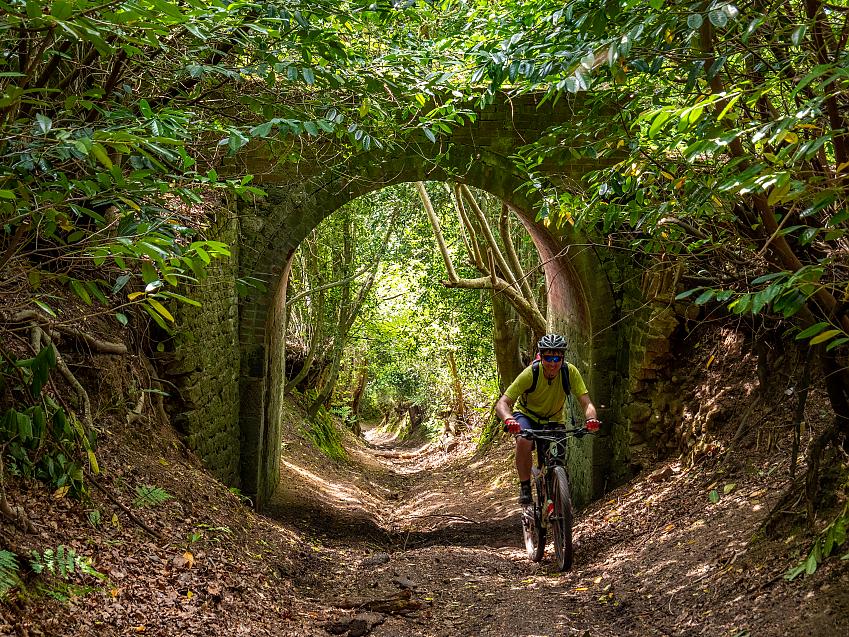 Beyond Liphook we lost most of the rest of the height we had gained before our coffee break, with a fun rollercoaster descent on tarmac, before going back off-road on a byway to Titty Hill, a tiny cluster of houses surrounded by woodland. Beyond here even the gravel bikes were struggling as the going turned to deep mud in places. On skinny tyres, heading west to Iping Lane to cut out this section would be strongly advisable.

Crossing the River Rother at Stedham, we stopped to admire the splendid Stedham Hall perched on the hill to the left. Although it dates from the 16th century, its current half-timbered appearance is the result of an enlargement and facelift only 100 years ago. Next came another stretch of bridleway best avoided on a road bike: not steep or muddy but slow going over lumpy grass. All the while getting closer in front of us was the final barrier before Chichester: the South Downs. At 248 metres, Linch Down is lower than the summit of the Devil’s Punch Bowl we had already crossed, but while that ascent was gradual and largely smooth-surfaced, the climb to this peak was steep and uneven. Julie and I made it to the path junction two-thirds of the way up and stopped for a breather, but after several minutes there was still no sign of Rob. Eventually I rode back down to find him struggling with a puncture - the first and thankfully only mechanical of the day. 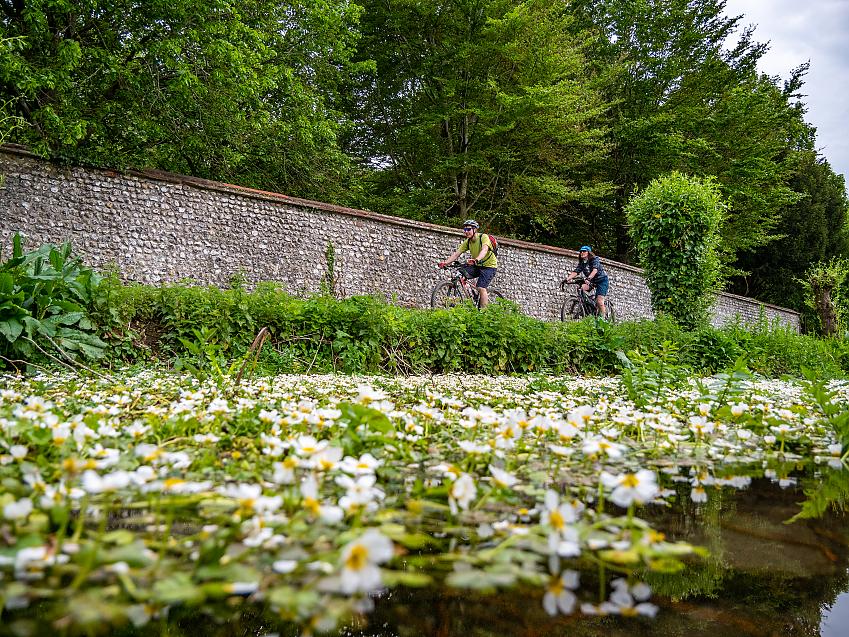 Fully reinflated, we reached the top, stopping to take photos for hikers on the South Downs Way before a breakneck 2km descent through the woods took us back to the tarmac. At West Dean there was an enforced diversion as a section of the Centurion Way, which follows the old railway line to Chichester, is currently closed (until October 2021) due to ash dieback disease affecting trees along the line. This did however give us a chance to buy refreshments at the community-run shop and tea room in this pretty village on the River Lavant.

The diversion follows a bridleway which again crosses grassy fields and would be hard work on skinny tyres, but once back on the old railway it’s easy going all the way to Chichester. A first glimpse of the cathedral spire off to our left inspired us to pick up the pace and we soon rolled to a stop beneath the outstretched arm of the statue of St Richard. 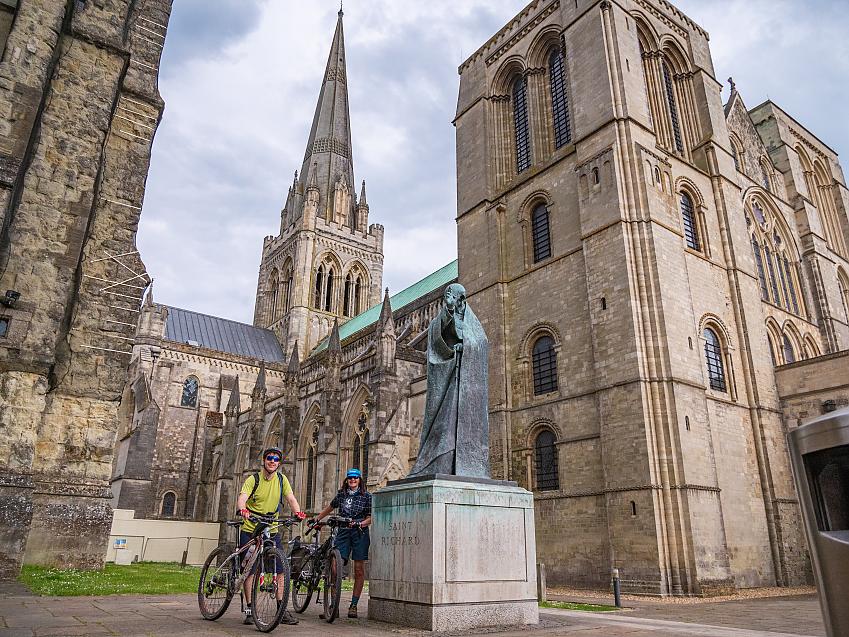 Chichester cathedral is quite a contrast to the 20th-century brickwork of Guildford: consecrated in 1108 it has Norman and Gothic portions and is very much how you imagine a traditional English cathedral ought to look. It is also right in the heart of the city, a stone’s throw from the pubs and restaurants of the main shopping streets for a well-earned celebratory drink. The station is also close at hand – we had to get back to work the next day, but if you don’t then there are another 41 legs of the Cathedrals Cycle Route to go…

Where: Surrey, Hampshire and West Sussex.

Route: Based on Cathedrals Cycle Route Leg 22 with some off-road diversions: see GPX route below.

Conditions: A mixture of tarmac and bridleways/byways, some of which are steep and rough and can be muddy even in dry weather. You may have to lift the bike over obstacles such as fallen trees in places. There are generally plenty of on-road options close by if you want to use a road bike.

I’m glad I had… A mountain bike. My colleagues coped on gravel bikes but some of the bridleways were steep and rough and having wider tyres and suspension forks made them more enjoyable

Next time I would…Take time to look at the magnificent interiors of the cathedrals as well as admire them from the outside. And, if I had time, continue on from Chichester to the beach!

Both the start and finish are easily reached by train, with Guildford and Chichester stations less than a mile from their respective cathedrals. The route passes plenty of towns and villages, so finding refreshments should be no problem: try The Stag on the River at Eashing (01483 421568), the National Trust café at the Devil's Punch Bowl and West Dean Stores & Tea Room (just off route but on the current diversion, 01243 818222).

If you are inspired to complete more of the Cathedrals Cycle Route, you can collect a CCR stamp or sticker at each cathedral: a CCR Finisher's Medal is planned to be available to all those who have completed the full 42 cathedrals. Check opening times and visiting details on the Guildford Cathedral and Chichester Cathedral websites before you go.

Cycling in West Sussex View
Cycling UK continues to support the UK to cycle
This remains true during this difficult period with the ongoing threat of coronavirus Covid-19
Read our latest advice on cycling
Join Cycling UK to help us change lives and communities through cycling
Membership gives you peace of mind insurance, discounts in cycle shops, rides & routes
Join now