The eighth edition of Bespoked, the UK Handmade Bicycle Show, runs from 20-22 April in Bristol. Cycle magazine editor Dan Joyce was there to judge touring bikes. Here are a dozen things that caught his eye, including the three bikes he awarded rosettes to.

A part carbon road-plus bike (640x42B) with 1x11 electronic gearing, the Exostiff could double as a light tourer: an Ortlieb QL3 pannier fits on top of its pump-carrying porteur rack. With its quick-release carbon mudguards removed, it’d be fine as a gravel bike too. An otherwise redundant lefthand Di2 shifter switches the dynamo lighting on and off – clever. Rosette winner. www.cyfac.fr 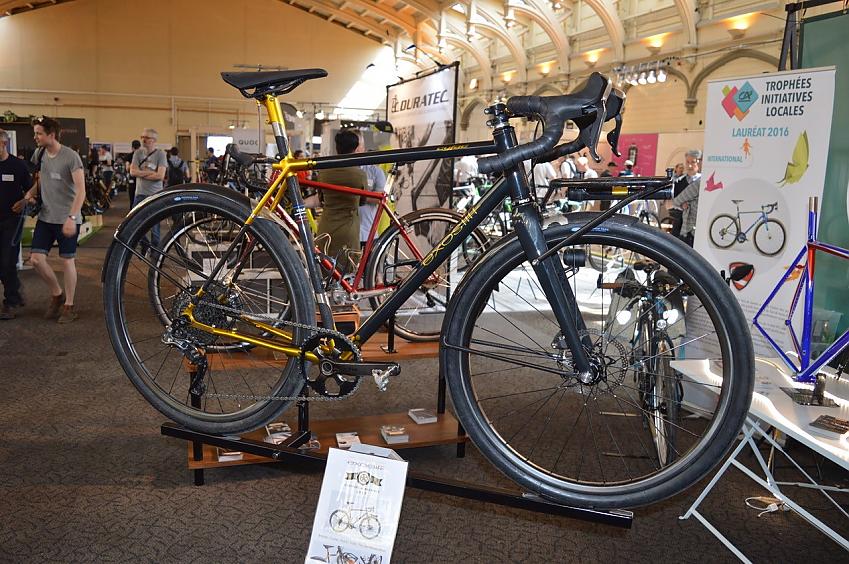 Filigree frame details and paint finish that’s as loud and brash as 1970s’ tribute act or those orange and brown curtains your mum used to have, this might be utterly impractical but it certainly turned heads at the show. The chain’s a bit slack, mind you. www.demonframeworks.com 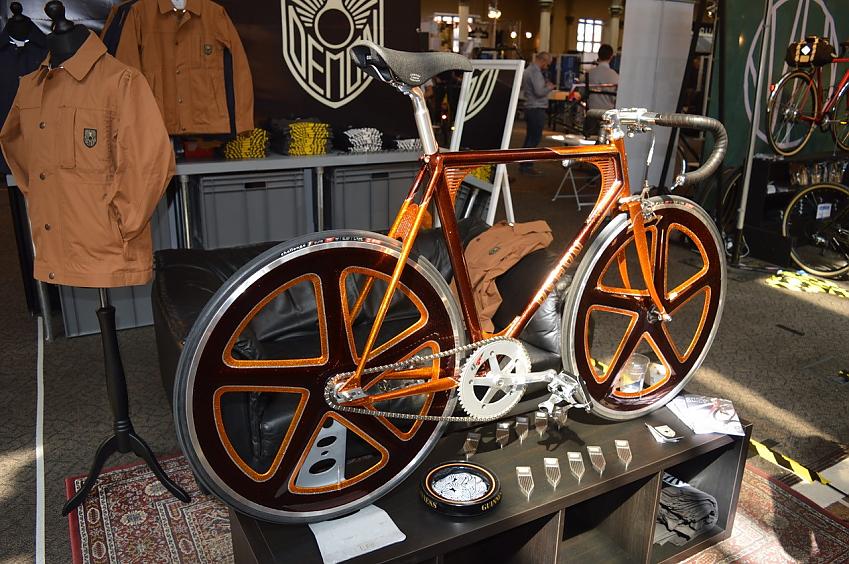 There’s more to these panniers than meets the eye. Each one folds out to form half of a fabric bike case, which you then zip together to stash your bike in during transit. Flightrider bags simplify flight-based touring, and handily come with two auxiliary bags to pack up the panniers' contents for the plane. www.flightrider.cc

Built by Cycle’s technical editor, this 26-inch wheel tourer is for a 140kg customer who’ll be riding down Alpine passes. Hence the Magura hydraulic rim brakes, which will dissipate heat better than disc rotors and won’t fade. Frame details include reinforcement at both the bottom bracket and the head and down tube joint, and the beefiest chainstay bridge you’ve ever seen. www.halletthandbuiltcycles.com 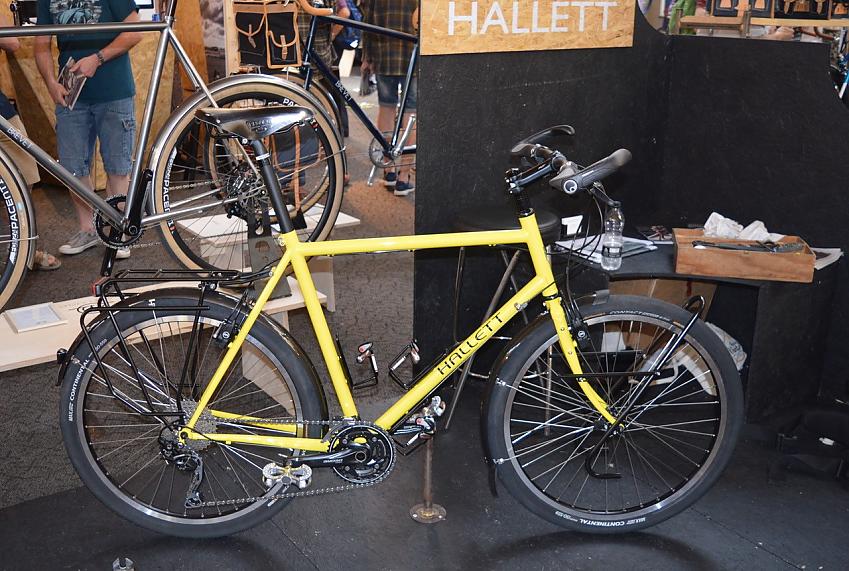 This tourer has 26-inch wheels not for strength but to suit the customer’s stature: it’s for a short lady owner. Campagnolo’s Ergopower shifters suit short hands, but there aren’t any short Campag cranks, which is why Rotor ones are used instead. hartleycycles.com 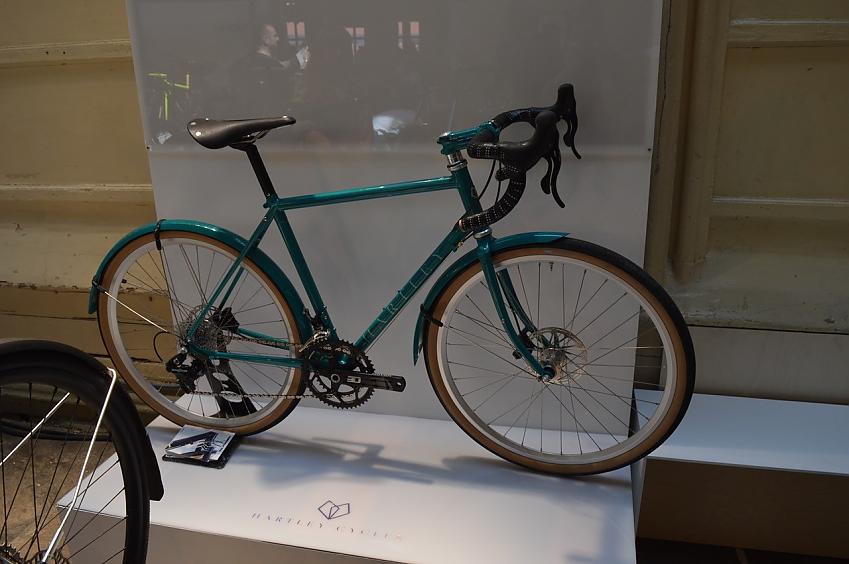 That’s the seatstay bridge (sic), modelled on the famous bridge of the town of the same name. It’ll take some cleaning if you use it as a winter cyclocross bike, but as a gravel bike or light tourer it’ll look smart. The frame and fork are Reynolds 853, and are equipped with hydraulic discs and wide-range Sram Rival 1x11 gearing; the cassette goes goes to 44T. www.ironbridge-bicycles.co.uk 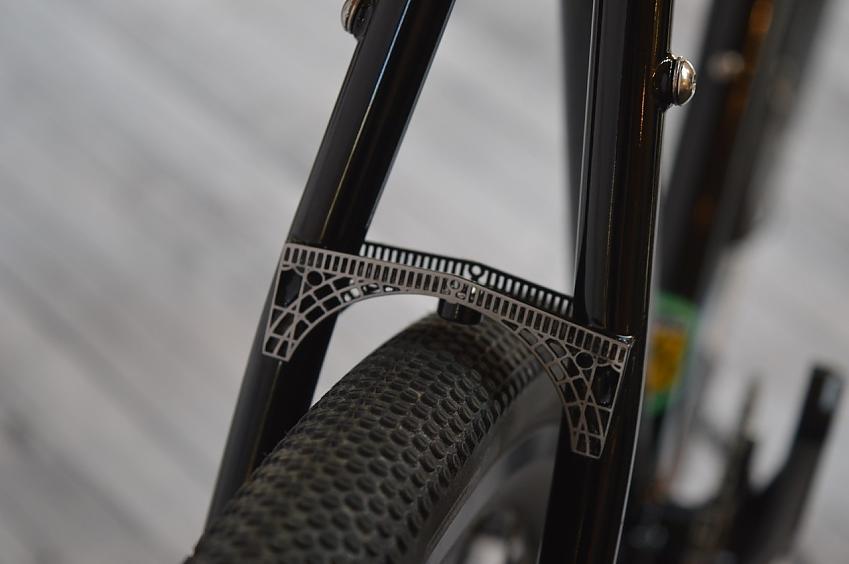 Jenny Graham's Round the World Bike

Shand’s Stooshie isn’t new but you’ll be seeing more of this particular model soon if Jenny Graham’s round-the-world women’s record attempt goes to plan. She sets off in June and is hoping to be back in under 144 days. The bike is reminiscent of the one used by fellow Adventure Syndicate rider Emily Chappell, as featured in the Aug-Sep 17 issue of Cycle. 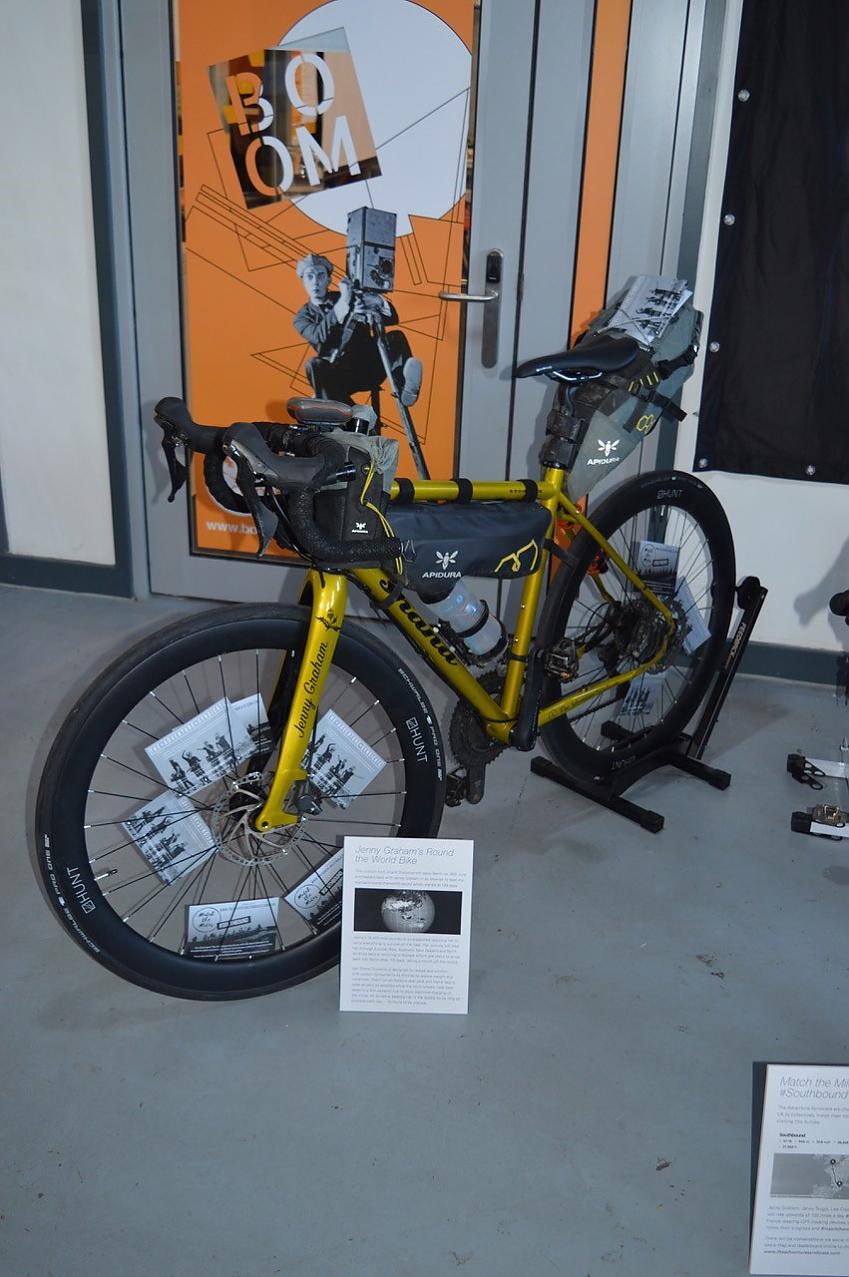 Jenny Graham's Shand bike for her trip round the world

I know what you’re thinking: how will I ever manage to transport my heavy chainsaw, tools, barbecue, and coffee machine into the backwoods? Worry no more! This Pinion-geared, rear wheel hub-motored, longtail e-bike is your answer. www.portus-cycles.de 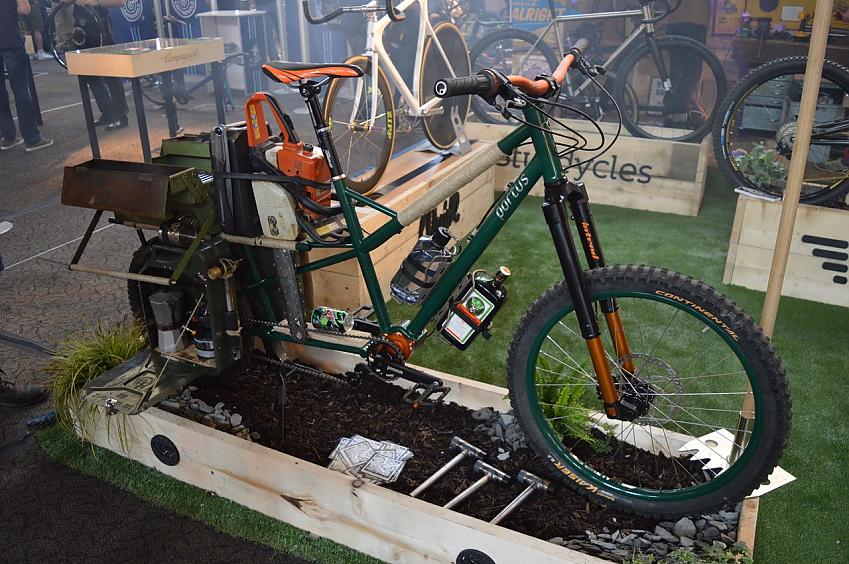 The livery and font are those of the Formula One Williams Martini Racing team because the bike’s owner is also called Williams and that’s what he wanted. But this Reynolds 853 tourer isn’t only interesting on the surface. For example, the belt-driven Rohloff Speedhub is operated by Sram drop-bar levers, courtesy of a Gebla Rohbox. Other details include Lezyne pump pegs, stainless steel head tube strips to protect the paintwork, custom-made magnetic Restrap luggage, and a USB charger port. Rosette winner. www.woodrupcycles.com 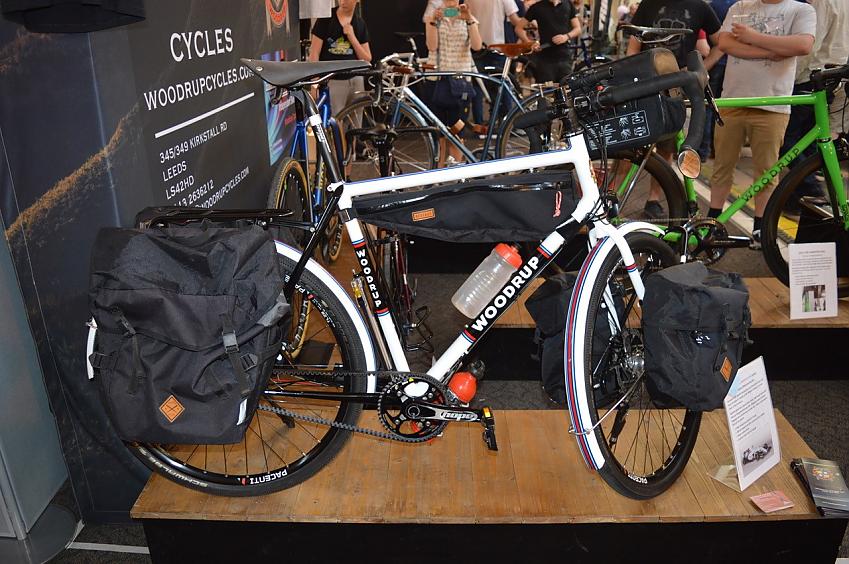 Shand’s new off-road tourer is a 29+ bike in the same mould as the Surly ECR or the first iteration of the Genesis Longitude, one of which I used for the one-bike-for-everything feature in Cycle last year. The belt drive and Rohloff hub model is only one possible build; you could have a one-by derailleur setup or a singlespeed. www.shandcycles.com 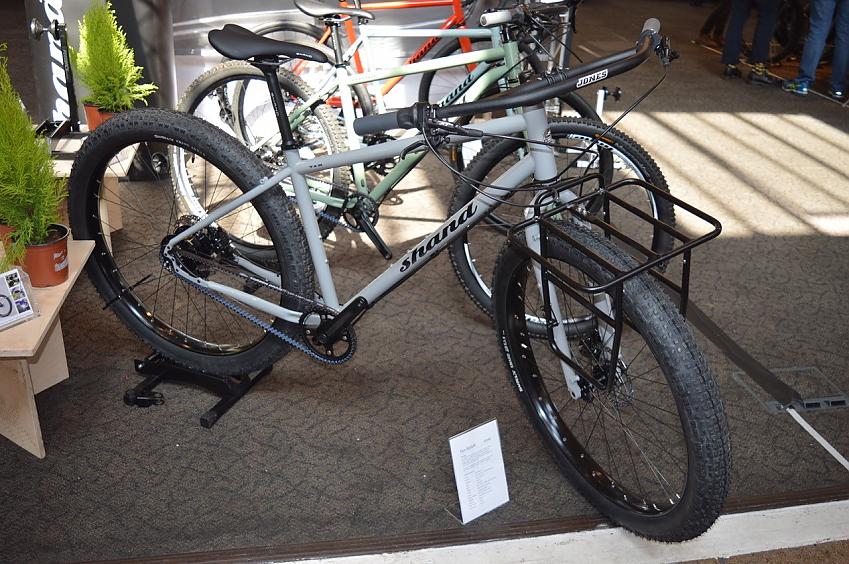 Rinko is the Japenese system for packing bikes for train travel: both wheels come off and the fork comes out (requiring a headset that won’t spill bearings everywhere). You’re left with a bagged package that Rinko fan and pioneer Jan Heine has measured at 79x83x23cm. This Stanforth is stainless steel, so in-transit scuffs are easily buffed out, and it uses pop-off pedals and hard-to-damage down tube shifters. Rosette winner. www.stanforthbikes.co.uk 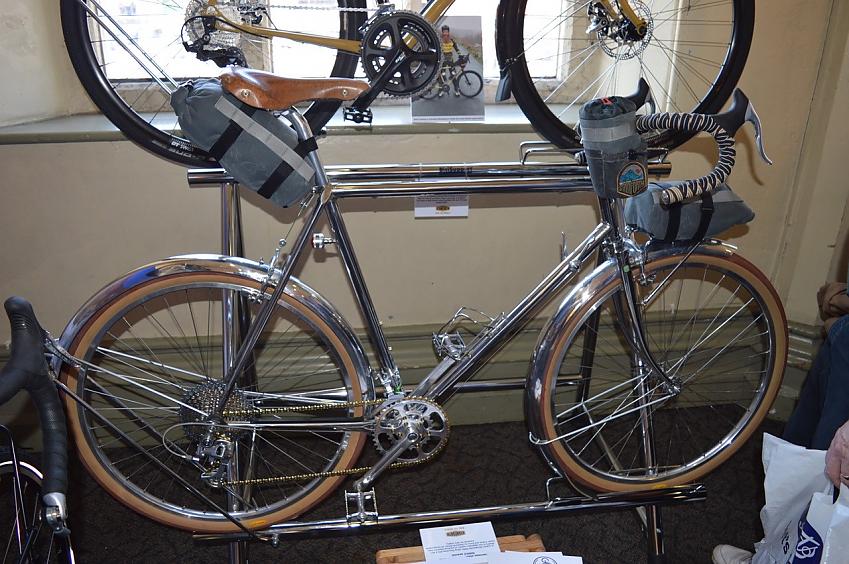 A longtail cargo bike with echoes of Surly’s Big Fat Dummy, this Reynolds 853 monster has integral stainless steel racks, a Pinion gearbox drivetrain, dynamo lighting, mid-fat tyres, and bespoke Sealand frame bags and panniers. It’s essentially an expedition bike for when you’re carrying everyone else’s luggage. And a surfboard. Or maybe even a chainsaw and a barbecue… www.svencycles.com 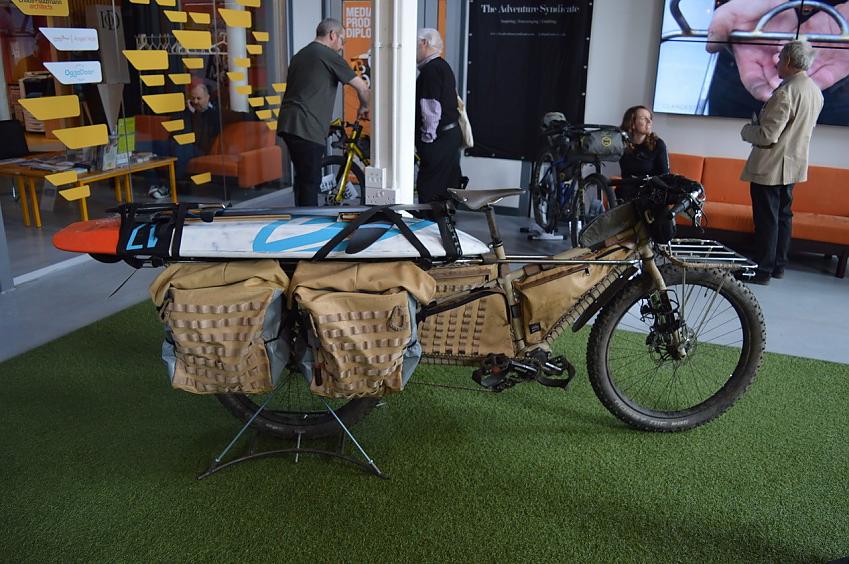 The normal ticket price for Bespoked is £20 for the day. Cycling UK members can get two-for-one tickets, either online (enter the code CUK24118), or on the door with a valid membership card.

Bike test: British steel View
Cycling UK continues to support the UK to cycle
This remains true during this difficult period with the ongoing threat of coronavirus Covid-19
Read our latest advice on cycling