Cycling non-stop from Edinburgh to Copenhagen by cargo bike

Lee Craigie and Jenny Graham testing out a cargo bike.

Cycling non-stop from Edinburgh to Copenhagen by cargo bike

Four women from the Adventure Syndicate are cycling 24 hours a day between Boxing Day and New Year's Eve on cargo bikes, with the aim of reaching Copenhagen. Cycling UK’s Claire Hutchison caught up with them before they set off on their challenge.

Two pairs of women from The Adventure Syndicate have set off from the Royal Mile in Edinburgh on cargo bikes, which will act as their home for the next week.

The cyclists: Scotland’s Active Nation Commissioner, Lee Craigie; round the world cycling record holder, Jenny Graham; Alice Lemkes and Phillipa Battye - are taking on the challenge in a bid to highlight climate change. 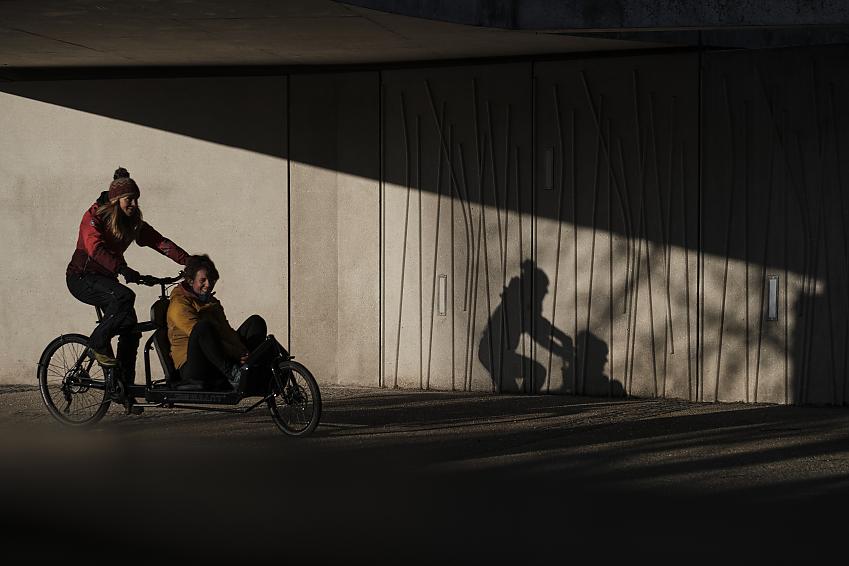 The four cyclists will swap with their partner every 40 minutes – one will be seat belted in the front of the bike as ‘cargo’, and they will eat and sleep on the move.

Lee Cragie from the Adventure Syndicate said: “It’s a race against time. People keep telling us we’re daft, it’s too cold, it’s too far, you’ve not prepared for long enough.

“They want us to wait to try the challenge in the spring, but we say there is no time. We’re riding to highlight our climate emergency and this 'let’s do it later' narrative has been used for too long.

“No, we’re not sure we’ll make it, but that doesn’t mean it’s not worth trying. In the same way as choosing to walk or cycle instead of drive in our everyday lives, it’s not just about the reduction of our carbon footprint, it makes us feel good too.”

The 1000km route leaves Edinburgh on the Sustrans National Cycling Network and follows National Cycle Network Route 1 round the coast to Tynemouth.

The riders will then cross the North Sea by ferry to the Hook of Holland, before travelling up through Germany to Denmark.

Jenny Graham from the Adventure Syndicate said: "To get there on time we are going to have to spend as many hours as we can on the bike.

“Our number one aim is to make it safely to Copenhagen, so if we manage to sleep on the bike we’ll do that, but if not we will find accommodation."

Lee Craigie dreamt up the challenge while on a recent visit to Copenhagen – where 41% of all journeys are completed on two wheels. Cargo bikes are also regularly used there to carry heavy loads, as an alternative to the car.

The City of Edinburgh has pledged to be carbon neutral by 2030. Leader of Edinburgh City Council, Adam McVey, said: “If people can travel that distance on cargo bikes carrying each other over that length of time, then there’s no reason on a day to day basis we can’t use cargo bikes to service our communities in a way that builds a sustainable future.”

The Adventure Syndicate hopes that their challenge will encourage people to use bikes for shorter journeys.

Jenny Graham added: “It’s easy to get cosied up and a bit lazy at this time of year, but I like being able to squeeze an adventure in.

“I’m excited to see if we can do it because there are so many uncertainties, anything could happen."

The women are also planning to turn footage from the epic journey into a feature length film – with each bike carrying recording equipment and a small media crew following them.

Lee Craigie added: “It’s all about the stories we tell. We want to inspire and encourage others to get outside and be active because we passionately believe in the value of this for the health of our bodies, our minds, and the health of our planet.

“But mostly we just hope that by recording and sharing our challenge in real time online, complete with highs and lows, people watching might be hooked in by the fun and camaraderie of the adventure and wonder what they might be capable of.”