What to eat and drink for a long Charity, Sportive or 100 mile ride

nutrition for a longer rides
By Cycling UK
Thursday, 20 December 2012

What to eat and drink for a long Charity, Sportive or 100 mile ride

Spending the better part of day on the bike is no joke. To maximise your enjoyment we've put together some sample menus for longer rides.

Breakfast should be light and high in carbohydrate - cereals, toast and porridge are good examples. To start your caffeine loading program, drink one 750ml bottle of EnergySource X’treme, in the period 60 to 90 minutes before the start of your ride. At the same time take the following EnergyGel PLUS which contain a moderate caffeine content.

How much you are able to drink during your ride will depend on the weather conditions and your sweat rate. The special 2:1 formulation in EnergySource means that in hot conditions you can drink in excess of 1000ml per hour without upsetting your stomach. If the weather is cold and you drink less than 800ml per hour, you need to increase your carbohydrate intake, by taking EnergyGel. If you drink the following amounts of EnergySource each hour, you should take the number of gels shown: 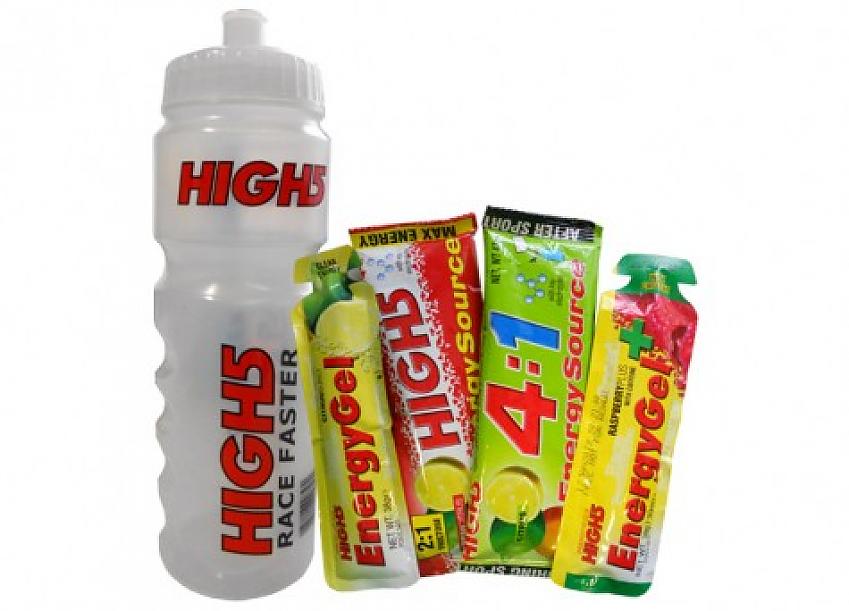 Your first gel each hour should be EnergyGel PLUS (contains caffeine) to keep the caffeine level in your body topped up during longer events. Any remaining gels taken in that hour should be standard EnergyGel (no caffeine) otherwise your overall caffeine intake will be too high. You will not need to eat or drink anything else even during a longer event.

If you have a medical condition or do not wish to use caffeine for another reason, then simply switch each of the products detailed above with the non-caffeine equivalent from High5 and ignore the section on caffeine loading before your event.

The American College of Sports Nutrition states that:
“Muscle cramps are associated with dehydration and electrolyte deficits and muscle fatigue.”

Adding Zero Neutral Tabs to your drink boosts the electrolyte content and provides magnesium. This might be particularly useful in hot conditions.

Drink 750ml of Protein Recovery as soon as you finish. Eat a balanced meal one to two hours later.

Despite the lack of unequivocal evidence however, most scientific authorities agree that any nutritional cramp-prevention strategy should aim to address three important areas:

1. Maintaining adequate hydration – because all electrical signalling activity in the muscles takes place in an aqueous (water) environment and even small shortfalls in hydration levels could lead to impaired electrical signalling and an increased risk of cramping;
2. Ensuring adequate dietary intake of the electrolyte minerals – sodium and potassium because they’re involved in conducting electrical signals to/from muscles, and calcium and magnesium, which are essential for the contraction and relaxation of muscle fibres;
3. Replenishing energy in the form of carbohydrate – because even small drops in the level of stored muscle carbohydrate (glycogen – your body’s premium fuel for exercise) can lead to increased fatigue, which may in turn increases the risk of muscle cramps.

Training plan for sportives and charity cycle rides View
Cycling UK continues to support the UK to cycle
This remains true during this difficult period with the ongoing threat of coronavirus Covid-19
Read our latest advice on cycling
Join Cycling UK to help us change lives and communities through cycling
Membership gives you peace of mind insurance, discounts in cycle shops, rides & routes
Join now