Technical Editor of Cycle magazine Richard Hallett reviews four medium-sized bags suitable for day rides, commuting, and credit card touring
One of the first rules of cycle touring is to carry even a small amount of luggage on the machine itself rather than in some sort of rucksack. It’s more comfortable, it lowers the centre of gravity, and it is, arguably, safer in the event of a fall.
For moderate loads, British cyclists have traditionally preferred the saddlebag over a continental-style handlebar bag, which is size-limited by the width of the handlebar and the tendency for a well-filled bar bag to affect steering and handling.
A heavy saddlebag might overload a lightweight seatpost or its frame’s seatpost clamp, but that’s unlikely to be a problem with the four medium-sized bags on test. At between 4 and 10 litres capacity, they’re all big enough for a day ride and the larger ones might suit for a short credit card tour if sensibly packed. 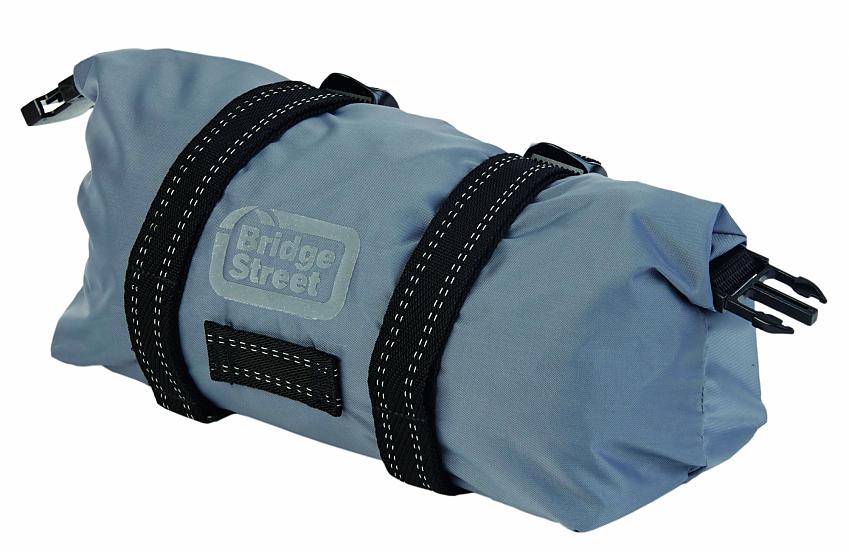 Well suited to a lightweight road bike or MTB, this neat bag has a rigid internal stiffener that forms the base and front wall of the bag. It’s made from double-skinned, waterproof-coated nylon fabric with roll closure. The flexible fabric and cuboid shape offer around 8 litres of capacity, while the closure and twin external straps cinch on undersized contents to keep them from shifting around.
There’s also a zippered internal pocket for a map etc. The bag uses the Klickfix mounting system, which is easy to use once the main bracket has been attached to the seatpost. There are two versions: long and short; inclusive bag weight is 800g and 620g respectively.
The long bracket, which offers more leg clearance, is fixed using a steel strap and hex bolt. The short one isn’t as good as it employs torque-limiting Phillips-head screws and a plastic clamp.
Verdict: Light, versatile and easy to use once the bracket is installed. 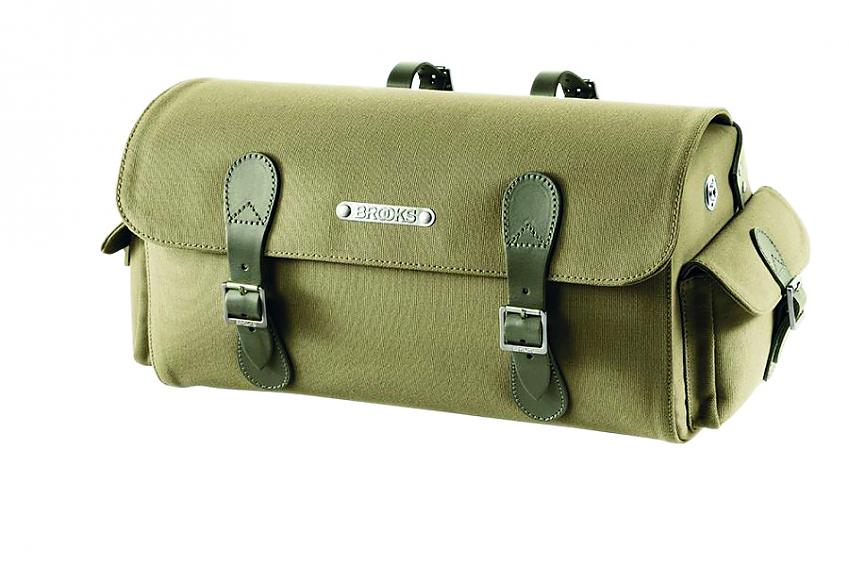 A recreation of a 1950s design, the Glennbrook is described by Brooks as suitable for the carriage of a picnic lunch and other delights. It is beautifully made and the semi-rigid polyester fabric makes it a true holdall rather than a mere ‘bag’. It is well-equipped, featuring a detachable webbing shoulder strap, side pockets, and little sub-flaps under the main flap for added weather protection.
The bag attaches by two straps threaded under a leather bar along the upper surface, with a seatpost strap for stability. While capacity is a cavernous 10 litres, weight could be an issue. So if that picnic includes a bottle of champers, the bag might need a support rack. It is the heaviest saddlebag here at 850g. Along with its luxury style, this might tell against it for expedition use. On the right bicycle, with the right sandwich filling, however…
Verdict: a handsome, capacious companion for a civilised ride. 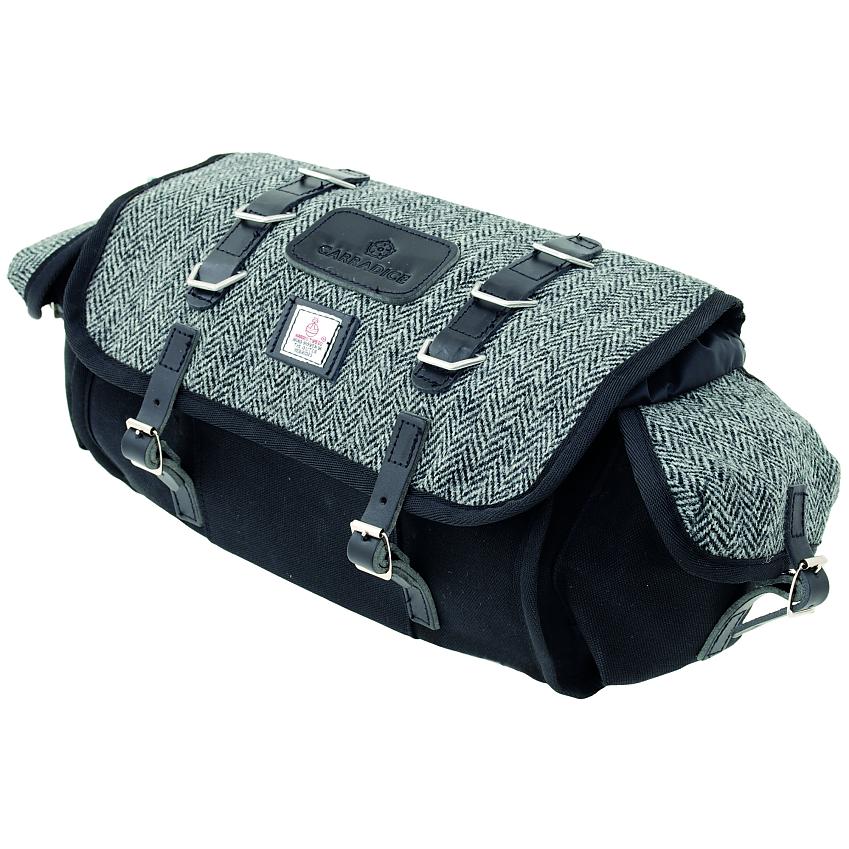 This limited-edition example of the 9-litre Barley saddlebag wears a very fine Harris tweed coat that nicely sets off the black cotton duck of the body. Given tweed’s reputation for shrugging off dirt, it would surely cope admirably with a serious session of rough-stuffing. In use, weight is carried by two leather straps that loop around an internal wooden dowel to spread the load and avoid straining the fabric.
As ever with Carradice bags, it is built to last, with enough reinforcement, pockets, leather strappage, metal stowage loops and heavy-duty riveting to interest a military surplus supplier. It is, therefore, surprisingly light at just over 600g, although this jumps to over 1kg if attached by the Seatpost Quick Release carrier (£30). This is sturdy and effective and it sidesteps the issue of bag loops on the saddle, but it lacks the charm of the bag itself.
Verdict: a traditional saddlebag with traditional virtues and more. 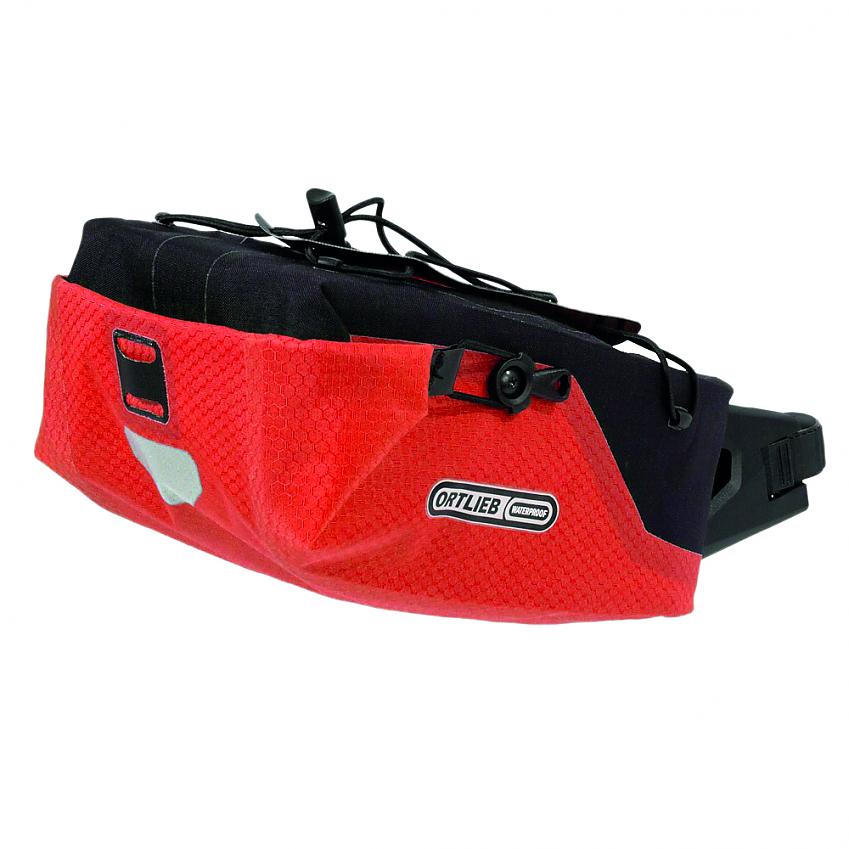 Everything about this bag suggests ‘performance’, from the sleek, round-nosed shape and high-tech fabric right through to the aggressively-styled flip lever on its seatpost attachment strap. It’s light, it’s completely waterproof, and it’s about as close to ‘aero’ as a saddlebag can get.
The shape also gives it something of a rear mudguard effect; in fact, just about the only minus point, from the performance cyclist’s point of view, has to be the 2.5kg weight limit. Or maybe not, given the effect of excess weight.
Fitment is a breeze: adjust the strap length using the clever integral ratchet, wrap it around the post and flip the lever. Clothing can be stowed under an elasticated strap on top and there are two internal pouches to hold smaller items. And it’s made to Ortlieb’s usual impeccable standards.
Verdict: built for speed and convenience.

This article was first published in the April/May 2016 edition of Cycle (the magazine for Cycling UK members).

How to choose the best saddlebag

Any saddlebag should be able to keep its contents dry in wet weather but fabrics vary in their capacity to shrug off water, mud and road grime, which will be an issue if the bag is to be used without mudguards.

An effective quick-release system can make life easy but adds weight, may limit carrying capacity, and leaves the bag vulnerable to theft unless the bag is removed when the bike is left unattended. Traditional twin straps require strap loops. Some saddles incorporate them and it is also possible to buy bolt-on loops that clamp to the saddle rails.

A bag that sways around can negatively affect handling, especially when riding out of the saddle. The more rigid the attachment, the better.

The traditional single large flap offers easy access but can struggle to prevent spillage unless the bag hangs perfectly level. Roll closures are more effective at keeping out the elements but can be fiddly to operate.

External side pockets make it easy to stash and access small stuff such as tools and a puncture repair kit. If limited to one large chamber, an internal pouch can prevent stuff rattling around in an under-filled bag. D-rings on top enable a jacket or similar to be strapped on top.

It quickly adds up when packing and the bag’s net weight is a factor. Include the weight of any attachment system when assessing.