Cycling uphill is considerably harder than riding on the flat, but most cyclists can’t help themselves. Dave Barter wonders what makes us cycle up steep climbs and meets cyclists who are fast uphills.

Tarmac switchbacks snake down from the summit of the Bealach Na Ba, where I know fantastic views and a sense of satisfaction await. I click into my lowest gear early, and not just because I want to savour the scenery. The road steepens around a tight bend. I stand on the pedals to keep them turning. Hill climbing is seldom easy. It makes me wonder again: why do we do it?

Several reasons. Every hill is a challenge of some kind. Its incline shows the cyclist a path upwards and asks the question: can you conquer this? For some of us, that’s motivation enough: we tick off tough climbs like mountaineers, setting ourselves against the slope.

Others take this challenge further. Not only do they want to succeed, they want to win. There are plenty of cyclists on and off road who seek to own the fastest ascent of any and every climb. For them, it’s a badge of honour to become the ‘king' or ‘queen' of a mountain, a phrase lifted from the classic cycling races of old and now used on even the most modest hills.

But competition and challenge are not the only reasons. Hills and mountains let us look at the landscape in new, panoramic ways. Summit-seeking roads and tracks deliver views that reward the sweat expended to attain them. They often deliver cyclists into places that motorists cannot reach. My most uplifting moment on a bike was in the Scottish Highlands, where I descended from Lochan Sgeireach towards Loch Stack in the fading light and took in a Tolkien-esque view only available to one who had arrived by muscle power.

If these were drawn on a Venn diagram, my own motivations would sit clearly in the intersection of all three. I cannot get enough of hills. Living in Wiltshire, I have plenty to choose from but still find myself wishing that the glaciers had come further south and carved a little more profoundly, thus saving me long trips to the Highlands or Alps. I don’t care whether they’re beautifully tarmacked road climbs or horribly technical rocky tracks. Give me a stopwatch and let me at them, whilst promising me a good view at the top. I’ve even succumbed to tick-listing, led astray by Simon Warren, author of the book 100 Greatest Cycling Climbs and its sequels.

Simon’s a racer. Many years of track and first-category road racing have whittled him into a lean and powerful rider, with a physique made for riding uphill. And boy, does he love it. Simon spent a year of his life travelling the UK and hammering up the most iconic road climbs. He catalogued his favourites in 100 Greatest Cycling Climbs.

This book laid down a challenge: can you climb them all? He graded each on a scale of 1-10, but scored my own favourite, the Bealach Na Ba, as 11/10: ‘the Holy Grail of British climbing’. I shared a pint with Simon to try and understand his motivations for writing the book. He flicked through the pages of my own weatherworn copy, smirking at my shaky handwritten ticks next to 50 of them. His eyes lit up as he remembered each challenge, though he struggled to pick a favourite: ‘The Lecht, no the Bealach, no maybe…’

Simon’s guides to further climbs – in the UK, Belgium, and France – provide further highs for hill climbing addicts. But he’s hooked on his own drugs, returning again and again to some of the climbs via sportives such as the Fred Whitton or the Marmotte. His next step? He’s planning his first Everest. ‘I’m going for under ten hours,’ he tells me.

The concept of Everesting is simple. Find a hill and ride it repetitively until the cumulative height ascended exceeds 8,848 metres. You’ve now climbed Everest on a bicycle.

Everesting was conceived by Andy Van Bergen, inspired by reading George Mallory’s preparation for an Everest climb in the footsteps of his grandfather, the better-known George Mallory. Mallory junior's cross-training regime involved cycling repeats up a mountain. Andy was inspired: ‘I was too afraid to vocalise it, but I knew I had found the next epic.’

There are two challenges to Everesting. The first is achieving the height and thus gaining a place in the hall of fame. The second is putting a new ‘Everest’ on the map – the challenge is to ride a hill that has not been done before. Hundreds have done this already, and hundreds more are contemplating an attempt.

The names of successful riders appear on the website everesting.cc, which is run by Andy under the ‘Hells 500’ brand. ‘The beautiful thing about Everesting is that it is not bound by location or time, and that each experience is completely different. The hill can be super short, or grindingly long, on a perfect surface or chunky off-road. It can be completed wherever there is an up!’

In the summer of 2014, I took on an increasingly popular climbing craze called Everesting – riding hill repeats on a chosen climb until you’ve accumulated 8,848m. I successfully completed the challenge on four separate occasions over a ten-week period. My favourite was riding 30 times up the legendary Hardknott Pass in Cumbria.
I began at 6:30am on 20 July.

The climb rises up through some trees and over a cattle grid. It’s not long before you are faced with a number of 25% switchbacks. Once you’ve tackled these, the landscape opens up. It’s then clear why people fear this climb so much. In the distance, the summit is almost visible, but before that are more sets of switchbacks, only this time steeper than the first. The final hairpin is a savage 30%, and is followed by a steep drag that only eases off once you’re near the top.

During rep nine, I met a guy who had attempted to Everest the very same hill earlier in the day. He’d stopped after two reps, thinking it was impossible. This spurred me on to complete the challenge. I battled through to rep 20 with a lot of encouragement from passers-by.

The final 10 ascents were tough, as I tried to finish in a good time. I kept stuffing my face with food and attacking the climb. It was relentless but I finally hit the top for my 30th and final time, after 12hrs 42mins and 29,129ft of ascent. The Lake District classic had been claimed. 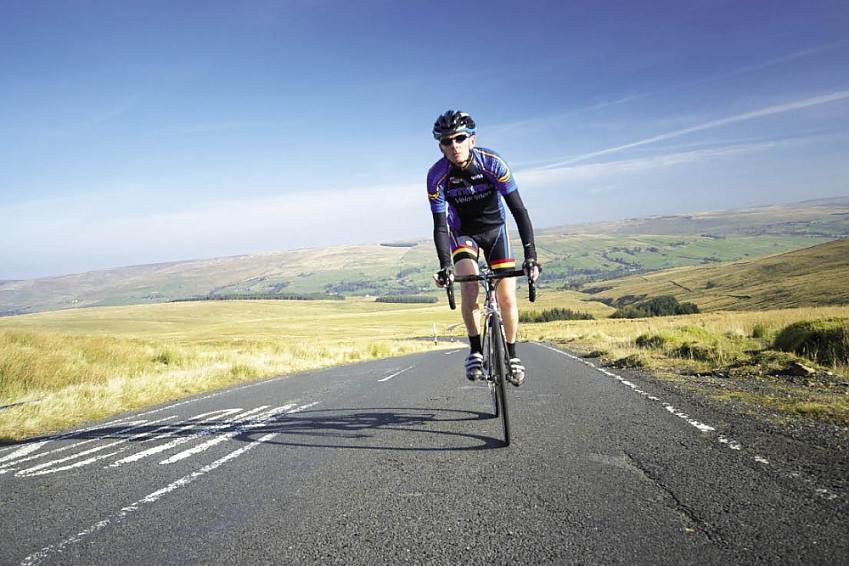 The 100 Climbs and Everesting challenges are recent phenomena. As always in cycling, there are those who have been at it for years. Here it’s the Ordre des Cols Durs. Their members have been collecting cols via bicycle since the 1960s. A col is defined as a pass going from one river to another with higher ground in between. To count for OCD purposes, it must climb more than 300 metres above sea level and incur a minimum 100 metre re-ascent after a previous col. The UK club is a spin off from rules originating in France. It has a more relaxed attitude to the 300 metre rule, which would negate many of our classic road climbs.

Rod Dalitz is the driving force behind OCD UK. He gives me the same reason as Mallory senior as to why people choose to head up a mountain: ‘Because it's there. There is something about the clean, high air and feeling above everything else, a great satisfaction. It is easy to wonder: will I be able to do this? And then it is satisfying to complete one day of a series, as planned. And as another saying has it: “It feels good when you stop.”’

OCD UK is run under the auspices of Audax UK. It’s a group of riders who each set out to add to their personal collection of cols. These riders are not racers trying to set a best time, more connoisseurs of great hills, accumulating them at their own pace. Members tally their metres climbed throughout a lifetime of cycling. There are some incredible figures: OCD UK members Ron Chard and Julie Rattray have climbed well over two million documented metres in their distinguished careers as col hunters.

Collecting climbs, Everesting, and OCD UK aren’t the only spurs that get cyclists to various summits. Every day, millions of cyclists worldwide upload their GPS ride logs to the Strava website (strava.com), where they will automatically be ranked on any Strava segments they’ve ridden. The fastest will be the virtual king or queen of each ‘mountain’. For some, this is their sole motivation: a set of online leaderboards that must be conquered in order to satisfy pride.

Some take their gravitational medicine off-road. The concept of ‘pass storming’ has existed in cycling since the nineteenth century. It’s the act of taking a bicycle over a classic mountain pass simply to discover what exists on the other side.

Touring cyclists, on road or off, know full well that topology translates into adventure and will plan their routes to suit. Where can you find the best valleys? Where the hills are. Where can you find a view into another country? From the top of a mountain pass. Walter McGregor Robinson, writing under the pen name of Wayfarer in 1919, described a snowy epic across the Berwyn Mountains in Wales to his readers. It took in frozen ridges of mud, ice, and loose stones. When asked ‘Was it worth it?’ his retort was ‘I count it a privilege.’ Many mountain bikers, eyeing climbs such as Snowdon or Cadair Idris – and the descents to follow – would nod in agreement.

Sportive riders, meanwhile, often pick their events based upon the climbs that define them and their subsequent difficulty rating. There’s a badge of honour in a series of hard ascents ticked off along the way to one hundred miles.

And let’s not forget the end-of-season hill climb racers who round off a year of road racing or time trialling with a number pinned to their back and a dogged fight to be fastest up their local club’s hardest hill.

The motivations to climb hills on a bike are as many and varied as the cyclists themselves. The rewards sought by these climbers may seem pointless to some, but like many human endeavours, we’d be poorer as a species without them. I’ll continue to ask myself ‘why?’ as I grind up a difficult climb, but I’ll do it anyway, compelled by a force stronger than gravity. Why? Because it’s there.

Dave Barter wrote Great British Bike Rides, which includes 40 of the best road rides in Britain – many of them hilly.

A GPS will measure distance ridden and height gained, and can be exported to websites such as strava.com and mapmyride.com. A device with a barometric altimeter, such as the Garmin Etrex 30, will log height gain more
accurately. garmin.com

While the traditional roadie will frown on anything smaller than 39 on the front or larger than 23 at the rear, lower gears make
sense for those unbowed by peer pressure. How about a 40T rear sprocket? You’ll need an MTB rear derailleur for Hope’s 40t-rex. hopetech.com

Mask your pain and pretend you’re taking it easy by wearing sunglasses, like these Tifosi Dolomite 2.0 ones. Alternatively, look meaningfully at your club mate at the base of the climb before accelerating. (This only works if you’re first to the top.) zyro.co.uk

The less you have to haul uphill, the easier it is. You can’t buy a thinner body (although you can buy fewer pies), but you can buy an absurdly light Trek Emonda SLR 10… if you’ve got £11,000 to spare. It weighs 4.65kg in the 56cm size. trekbikes.com

We put your favourite climbs nominations to the vote on the Cycling UK website and the results are:

Everyone who nominated climbs went into a prize draw for one of two sets of Simon Warren's four 'great cycling climbs' books.