Cycle tourism would be undermined by the proposals
By Chris Peck
Tuesday, 19 March 2013

An alliance of cycling organisations in Spain has demanded that the Government withdraw proposed anti-cycling measures which threaten to undermine the increase in cycling and deter green tourism. You too can write to the Minister with your comments.

CTC first reported on these concerns at the beginning of March.

Since then the Spanish government has backpedalled on the earlier proposal to prevent children cycling on their own.

However, many negative aspects of the proposals remain:

-        Cyclists must wear approved helmets at all times on all roads. The only exception being that professional cyclists, and cyclists in competition or training, will be governed by their own association regulations.

-        Cyclists should preferably ride on the hard shoulder or as close as possible to the kerb on roads with a speed limit of 50 kph or more.

-        Cyclists should preferably use the right edge of the right lane on roads with a speed limit of less than 50 kph and facilitate overtaking by faster motor vehicles.

-        Passengers and cargo cannot be taken on A-roads (autovías in Spanish).

-        Prior permission will be required for cycling events and some of the policing costs must be met by the organisers.

In response ConBici organised a protest by cyclists in 7 cities across Spain. Cyclists descended on the Dutch, German, French and Danish embassies and consulates, applying for 'cyclist asylum' against the laws. Below is a photo from the protest in Valencia. 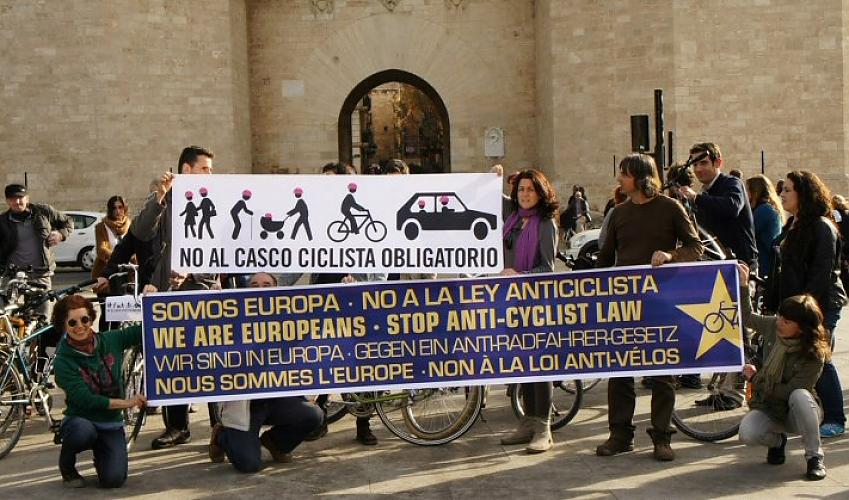 ConBici – the organisation that represents Spanish cycling organisations nationally – does not accept the manner in which the proposals presented by the national traffic authority (Dirección General de Tráfico or DGT) have been prepared and drafted.

The starting point for this reform was a document prepared over a period of several years in cooperation with cyclist organisations and the bicycle industry. However, according ConBici’s technical director, Manuel Martin, the newly appointed director of the DGT has ignored this previous work and issued cycling organisations with a copy of new proposals at the same time as it sent them to the media and the Interior Ministry – so excluding the possibility of any real discussion beyond the presentation of written submissions and alternative proposals.

As the draft reform also proposes the modification of regulatory items that do not affect bicycles, ConBici recommends that bicycles are excluded from this current reform and that work is restarted in a proper manner for the creation of a coherent consensus on bicycle regulations.

If this recommendation to exclude bicycles is dismissed by the DGT, then ConBici proposes the following modifications, deletions, and additions to the draft proposals.

Bicycles are treated as obstacles and their use is not encouraged

The introductory text to these draft proposals discusses how the reform is intended to legislate in favour of vulnerable road users. However, this statement of intent disappears in the actual drafting of the regulations. In the supposed interests of safety, regulations are proposed for bicycles that are unproven in their effectiveness and which penalise the use of bicycles. No thought is given to the consequence of these proposals; while priority on the roads continues to be given to the all-powerful motor vehicle.

If the DGT continues with this position, Spain will have lost the opportunity to become an advanced cycling nation with regulations that favour the use of bicycles and affirmative action for pedestrians and cyclists

Under Article 176 of the current regulations (road positioning), the bicycle enjoys all the advantages of being considered a vehicle. However, the DGT proposes relegating the bicycle to the category of ‘obstacle’ and states that bicycles should be positioned on the right of any lane so as not to impede the progress of faster motor vehicles. This is despite the fact that many motor vehicle drivers commit serious offences by overtaking cyclists too closely.

The draft proposals recommend lower speed limits for town and city roads; however, the standard speed limit will remain 50 km per hour – while 30 and 20 km per hour limits will be exceptions. The introduction to the draft regulations states: ‘In urban areas, the motor vehicle has begun to lose its dominating role and sharing the road with pedestrians and cyclists is becoming more important.’

For this reason, ConBici proposes that 50 km per hour limits become the exception for urban roads, and that cyclists and pedestrians are suitably protected on these faster roads.

Proposed Article 175 states: ‘Cyclists will take the appropriate measures to ensure a safe coexistence with other vehicles.’ This proposed article shows how the DGT discriminates against cyclists, views cyclists as the cause of safety problems on the roads, and imposes a duty on cyclists that is impossible to fulfil.

Mandatory helmets are rejected by almost all affected groups

ConBici’s technical director, Manuel Martin said: ‘The DGT continues to ignore the innumerable studies that advise against implementing mandatory helmets and has ignored this opportunity to rectify this situation until a major reform of the Road Safety Act enables the repeal of mandatory helmet use in all circumstances’.

Numerous city councils throughout Spain have already expressed their opposition to mandatory helmets because this measure will discourage the use of bicycles and threaten the viability of public bike sharing systems.

According to ConBici, Articles 55 and Annex II of these proposals contravene the Spanish constitution by attributing to the DGT powers which it does not have with respect to the exceptional use of the road. These articles aim to limit the right to organise meetings and demonstrations and place a special emphasis on meeting and processions organised by cyclists.

Article 179 proposes the mandatory use of cycling helmets under all circumstances. This proposal contradicts the current Road Safety Act and eliminates the various technical reasons for not wearing a helmet that are permitted under current legislation – leaving the existing exemption for professional and competing cyclists as the only exclusion.

ConBici believes that this is the moment to encourage the development of bicycle touring and ‘green tourism’ and cannot understand why measures would be imposed that will prevent the growth of bicycle-related tourism (already well established in other European nations). Moreover, these measures will endanger the growing bicycle industry – one of the few businesses that is expanding despite the economic crisis.

Write to the Minister

If you are concerned about these proposals you can help by emailing your views (in English) to an official in the Department for Tourism, Clara Vilars: cvilars@minetur.es.