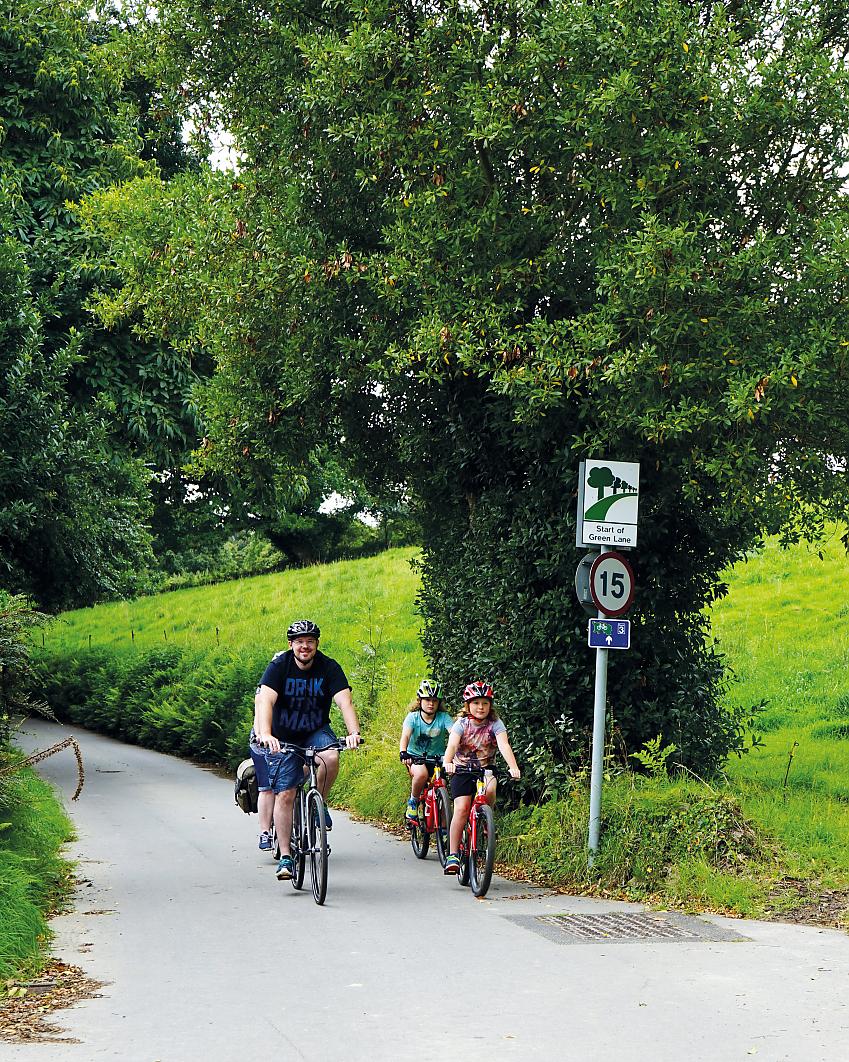 Cars are restricted to pedelec speed on the Green Lanes.

Jersey might be famous for its beaches but as Matt Lamy shows, the island's quiet lanes are a familyt cycling paradise.

With a land mass nine miles by five and a maximum altitude of just 450ft, Jersey is a leisure cyclist’s dream. There are traffic-free cycle paths along St Aubin’s bay, linking the west of the island with the town of St Helier; a new off-road cycle path up the lush St Peter’s Valley linking south and north; and the original ‘Railway Path’, which turned Jersey’s pre-war train track into a safe route for pedestrians and cyclists (and which predates Sustrans’ famous Bristol to Bath route!).

However, the jewel in Jersey cycling’s crown is the 48-mile network of Green Lanes: signposted country lanes with a 15mph speed limit, where cyclists, horse riders, and pedestrians have priority over cars. Jersey may be closer to France than Britain, but it’s just 4.5 hours by fast ferry from Poole, or less than an hour by plane from Gatwick. The route described – through Green Lanes in the island’s northeastern parish, St Martin – is just a sample of what’s available.

If you’ve brought a car, the car park at Gorey beach is a perfect place to leave it. You can then push or ride your bike along the front towards the castle (beware of parked cars – the Dutch Reach hasn’t yet reached Jersey). Then you’ll push your bike up Mont de la Guerande to our starting point.

Before you set off, look back and admire the view of the imposing edifice of Mont Orgeuil (or ‘Gorey Castle’), built to protect the east of the island from French invaders. Being within sight of the French coast, it also served as a visual reminder of British power on our Gallic chums’ doorstep.

Simply ‘Hougue Bie’ to locals, this is something of a mystical place, with an 18-metre long passage grave – one of the 10 oldest buildings in the world – underneath a 12-metre high earth mound, and a couple of medieval chapels on top. The  museum (family ticket £28.55) is open daily from  from 29 March to 3 November.

After a brief section of main road, you’ll arrive at St Catherine’s. The 600m breakwater was built as part of a giant port to house the Royal Navy. Work was never finished as the bay wasn’t deep enough for modern steam ships. Now it’s a great place to stroll or fish.

If you want to get a better idea of what the floorplan of the passage grave at Hougue Bie looks like, Faldouet Dolmen is the place to go. With its mound long since removed, you can see exactly how Neolithic Man used great granite blocks to build this tomb. There’s no fee to enter this dolmen; simply ride up the path and enjoy.

Rather than the more common Jersey Round Towers, Victoria Tower on Le Mont Nicholas is a genuine Martello Tower, built as part of the island’s defences in 1837 when Queen Vic herself was on the throne. Lying in the undergrowth nearby are more recent defences: German bunkers from the Occupation during the Second World War.  More recent still is an underground nuclear early-warning facility.

This was published in the Weekender section of the Feb/March 2019 issue of Cycle magazine.

How to transport children by bike View