There really can’t be anything better than a cycle along the seafront to clear your head – especially when it’s a ride with people who really understand what you are going through. Priscilla Bridges explains how being part of the Solent Mind cycling group is helping her find her freedom.

Run from the Portsmouth Wellbeing Centre on Palmerston Road, the Solent Mind cycling group started rides in August 2017, shortly after the Community Cycle Club was developed and funded by Cycling UK as part of the Community Cycle Club network; recognising how beneficial being out on a bike can be to just about anyone, the group gathers at the centre every Friday, sorts bikes for those who don’t have their own, and heads off. In its simplicity, the group is wonderfully supportive. There are no in-depth discussions here, and no one has to share anything they aren’t happy to. It’s just all about the cycling.

Priscilla Bridges is one of the group’s newest members, having turned up for a session just before Christmas. She was already a regular visitor to the Wellbeing Centre, where she finds help and support for her autism and mental health issues.

Priscilla said: “Cycling give gives you such freedom. It’s so much better than walking, and I struggle with buses as I find them too crowded.” 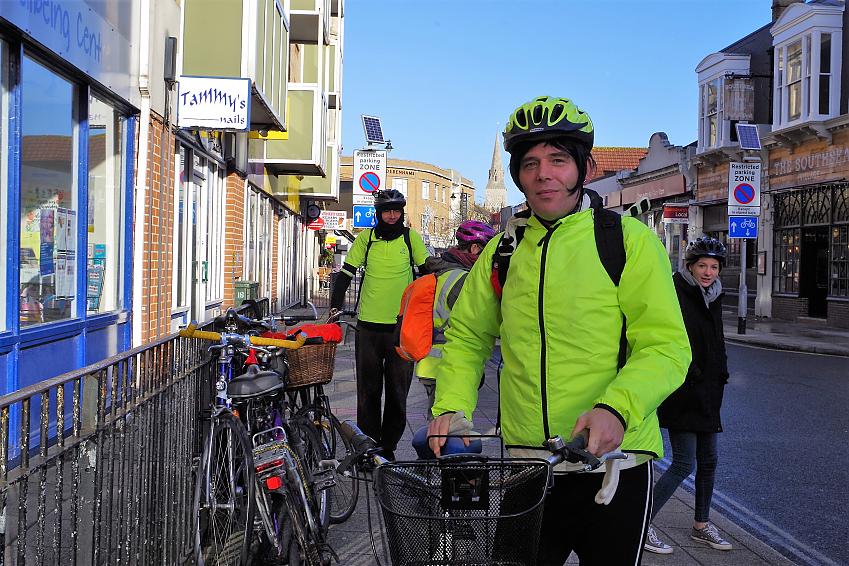 Being with others helps when navigating the city’s often confusing cycle routes, and gives an element of security and safety.

Priscilla continues, “There are some cycle routes that aren’t well signposted and you have to look online to find them. I like being involved in the cycling group, building my confidence up a little. It keeps my mind occupied, and gives me the confidence to meet other people. Someone gave me a BMX last time I came, and me and Paul fixed it up. I don’t which end of a spanner is which but I just have a go. I’m definitely going to stay with it.”

We have some very keen volunteers and staff who have been trained up to deliver the rides, and their commitment really makes this group a success.
Alex Cuppleditch, Cycling Development Officer

Cycling UK’s Cycling Development Officer for Portsmouth said: “It’s really encouraging to see people such as Priscilla embrace this new cycling group with such enthusiasm, and reap the benefits.

“We have some very keen volunteers and staff who have been trained up to deliver the rides, and their commitment really makes this group a success.”

Priscilla now has a volunteer job cooking for the homeless in Portsmouth, something that wouldn’t have been possible without the care and support found at the Wellbeing Centre. She has a tendency to be uncomfortable with making plans for the future, but a simple commitment to coming along to next week’s ride is a really positive step – it’s all about taking it one day at a time.

Watershed moment as Portsmouth Council back Space for Cycling View

Mental Health Minister sees impact of Health Revolutions View
You too can champion cycling in the UK
Give your support today to help Cycling UK’s charitable work tomorrow. We double every pound you give through other sources to help change lives and communities through cycling.
Volunteer now
Cycling UK continues to support the UK to cycle
This remains true during this difficult period with the ongoing threat of coronavirus Covid-19
Read our latest advice on cycling