Councils failing to improve public’s access to the countryside

Footpath on the left, bridleway on the right - can you tell the difference? Photo Sophie Gordon
By Sam Jones
Thursday, 21 January 2021

Councils failing to improve public’s access to the countryside

As the country has turned to the outdoors for release from the pressures of the pandemic, Cycling UK has found that most councils are failing to improve the public’s opportunities for access

As the country has turned to the outdoors for release from the pressures of the pandemic, Cycling UK has found that most councils are failing to improve the public’s opportunities for access.

A Freedom of Information (FOI) investigation of councils in England has found over the last 10 years councils have only upgraded a total of 442 rights of way, making them available for horse riding or cycling - an average of five improvements per council or one every two years.

The UK cycling charity is therefore calling for “public access and enjoyment of the natural environment” to be included as a priority area for target setting in the Environment Bill, due to be debated in Parliament on 26 January.

Eight councils, Hertfordshire, Wigan, East Riding, Devon, Shropshire, Hampshire, North Yorkshire, and Barnsley, top the table having created more than half of the new rights of way in the last 10 years.

The UK cycling charity says this poor track record in upgrading rights of way is symptomatic of a complicated and bureaucratic process which needs to be changed in the forthcoming Environment Bill, with clear targets set to improve the public’s access to nature.

Arguing that more people deserve the chance to enjoy the mental and physical wellbeing benefits of being in the outdoors, Cycling UK is also calling on the Government to provide local authorities with the resources they need to ensure that public access can truly become a public good, and reward landowners which make improvements to and maintain access.

“If the pandemic has proved anything, it's that public access isn’t just a public good but a public necessity. Our rights of way network is ripe for upgrade and improvement and while it’s shocking so little has been done in the last 10 years, the blame can’t lie solely at councils’ doors – the process is unnecessarily difficult and under-resourced by central government.”

Councils in England are required to draw up Rights of Way Improvement Plans every 10 years, however currently there is no requirement to act on them, and limited resource to do so. Cycling UK believes national targets will incentivise councils to act, and will see them improve access for greater enjoyment by the public.

“Cycling UK wants to see it made easier for councils and landowners to improve the rights of way on their land,” said Sophie Gordon. “Public funds should fund public goods, and that means making it easier to upgrade suitable footpaths for a variety of different users. The forthcoming Environmental Bill gives us this opportunity to make a positive change to our land management.”

A more progressive policy of land management will bring England in line with the other devolved nations says, Cycling UK. 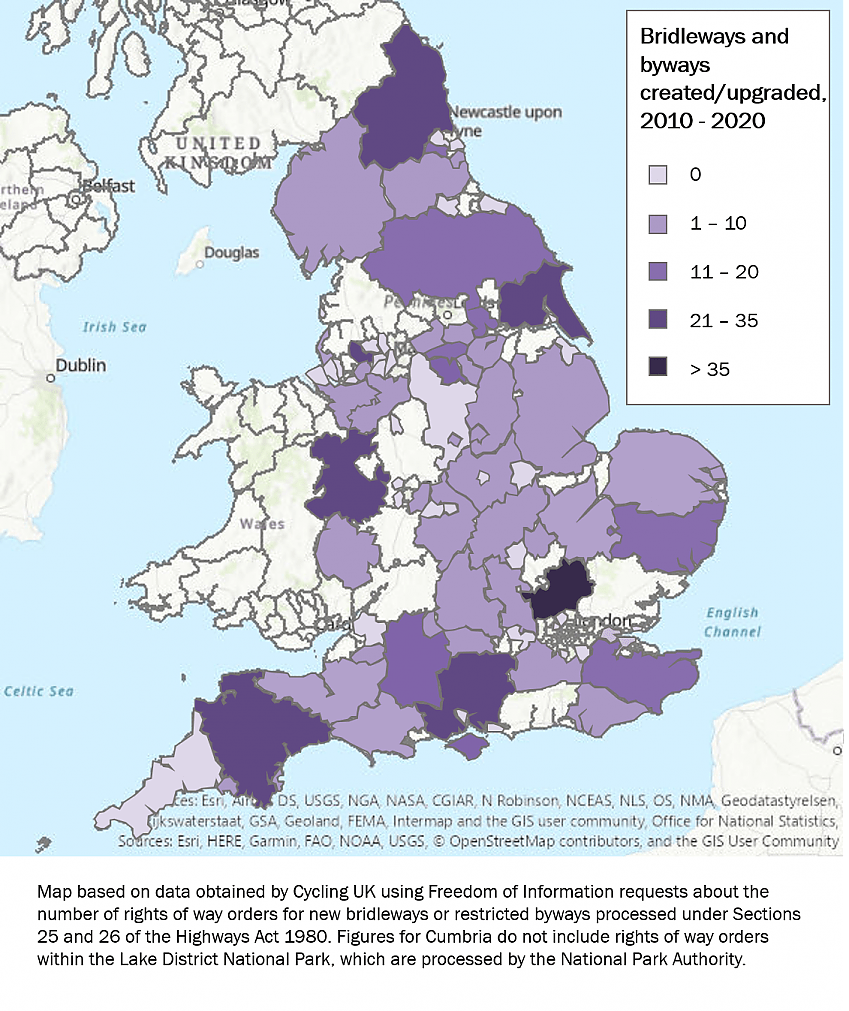 In Wales, the Welsh Government is in the process of simplifying how and where people can access the countryside. In a move welcomed by outdoor organisations including Cycling UK, they are considering proposals to make most rights of way multi-use by default, with exceptions where necessary for conservation or safety.

“In so many ways, England lags behind its neighbours in how it looks after its countryside and promotes its benefits to the public,” said Sophie Gordon. “The pandemic has shown how important access to the outdoors is for the nation’s physical and mental wellbeing. With the Environment Bill, we have the opportunity to leave a lasting legacy for future generations while also benefitting landowners and rural communities.”

For more information, please contact the national Cycling UK press office. Due to the restrictions caused by the coronavirus outbreak, currently the main press office number (01483 238 315) is not being monitored. If you would like to speak to a member of the press office please call 07786 320 713

New plans for farming post-Brexit – what does it mean for access? View