Cycling UK has today (24 February 2016) published the results of its 2015 Department for Transport-funded programme, the Big Bike Revival, to encourage people to make cycling a part of everyday life.

The Cycling Minister today pledged a further £500,000 of government funding to get unused bicycles working again, after 24,000 were revived under last year’s initiative.

Celebrating the high impact of the initiative with former EastEnders and 'Love Actually' star, Martine McCutcheon, and the Cycling Minister, Robert Goodwill MP, the charity has highlighted how the Big Bike Revival used a series of family-friendly fun events to excite people back into cycling.

Cycling UK brought together a network of 90 bicycle recycling centres across England to host over 1,600 events where people could get their bikes checked and repaired by expert mechanics, learn simple tips to help look after a bike, and donate old bikes to be brought back into use.

Paul Tuohy, Chief Executive at Cycling UK, said: “Almost half of us own a bike but nearly two-thirds have not used it in the past year, which clearly indicates there could be many more people cycling regularly, if it wasn’t for some barrier in their way, which we’ve found could be as minor as the most basic mechanical failure, leaving the bike impotent for years!

“Cycling UK’s Big Bike Revival has proved that with some simple promotion of existing local bicycle recycling centres, people are more than keen to take up the chance to revive their bike and learn how simple it is to repair a puncture, or fix a chain, and get themselves more active by cycling again. The Big Bike Revival programme reflects our ethos that we are cycling in the UK.”

Martine McCutcheon said: “I have loads of happy memories from my childhood of riding around my local area on my bike with friends. As a new mum, I wanted to find a good form of exercise that I could combine with my busy life. Cycling is the answer, as it’s an active way to travel around. Helping people to fall back in love with their bike and see how it can help them get around is so important – that’s why I support the Big Bike Revival.”

We are determined to create a cycling nation and the Big Bike Revival is a fantastic initiative getting impressive results".

Cycling Minister Robert Goodwill MP said: “We are determined to create a cycling nation and the Big Bike Revival is a fantastic initiative getting impressive results reviving old and unused bikes so people can begin their cycling journeys. I am announcing today £500,000 funding to support Cycling UK helping people, particularly in disadvantaged communities, use bicycles to get around, access jobs and stay healthy at the same time.”

The Big Bike Revival in numbers 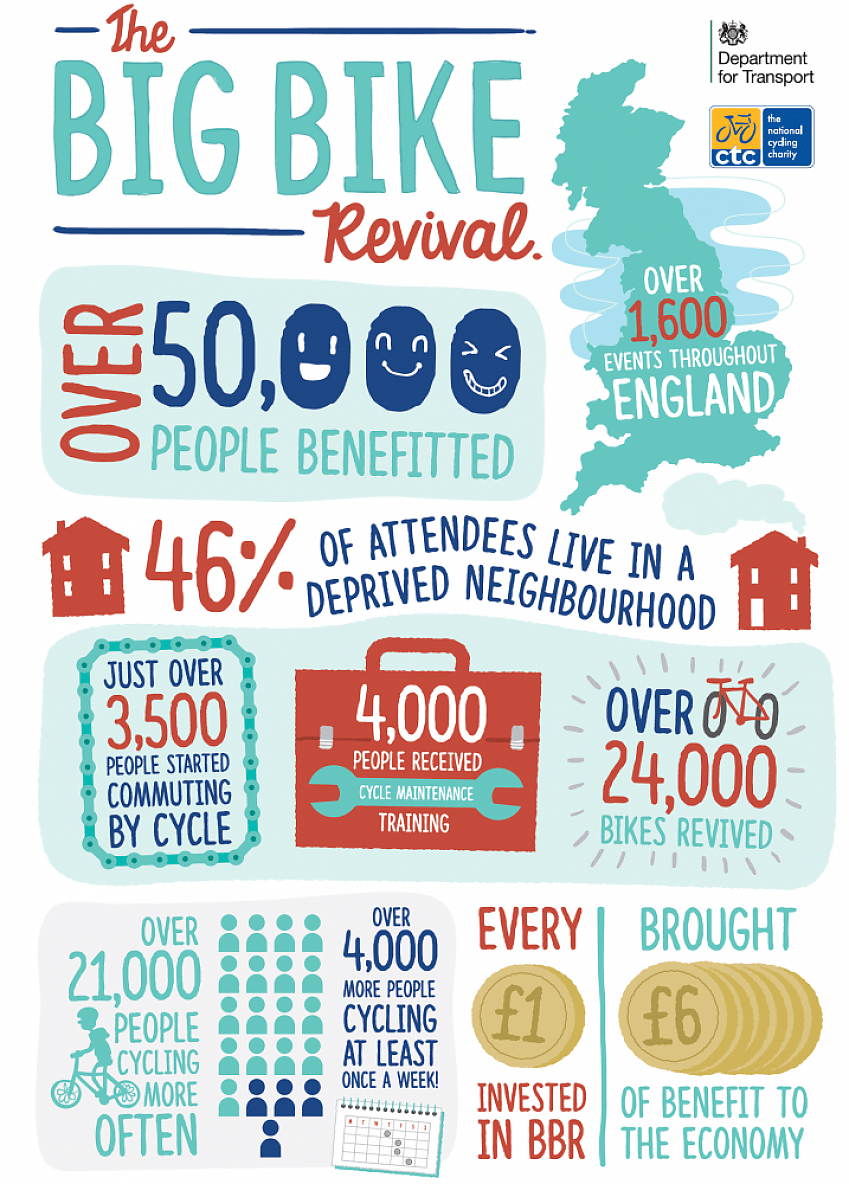