A leading advocate for cycling in Northern Ireland, William was a member of Cycling UK for more than 70 years

When William P McCormick succumbed to coronavirus on 27 June, 2020 aged 94, Northern Ireland lost one of its finest advocates of cycling, a member of the Cycling UK for 72 years and a modest, much admired and highly respected gentleman.

Billy joined the organisation when it was still known as the Cyclists' Touring Club in 1948. He was elected to the committee of the Northern Ireland District Association (NIDA) in 1950 and soon afterwards became Runs’ Captain.

With a background in the travel business, he brought his experience to benefit many of the younger members. From the early fifties he led the camping section. This took many by bike out of our cities and towns and into the countryside at weekends and other holiday periods. He introduced many to foreign cycling holidays and indeed led his first trip to the Swiss Alps as early as 1949. He continued to organise cycling trips at home and abroad until recent years.

At the start of the millennium Billy was the prime instigator of a group which catered for “fit” elderly cyclists who preferred a leisurely pace. It grew in popularity attracting many not-so-elderly and many not-so-fit cyclists and came to
be known affectionately as the Wednesday Wobbly Wheelers. The group is still active and is now able to take advantage of free rail passes to begin and end runs further afield. Its run from Newry to Spelga was featured on the local BBC Newsline programme on 4 August, 2004.

He met his wife, Joan in the CTC and they married in 1966. Home duties understandably reduced his commitment to cycling, but the family soon started to participate. He served faithfully in many roles, and in 1976 was elected NIDA President. He became the longest serving President in the the NIDA’s history before finally retiring from the position in 1997 - a total of 21 years. During that time he worked hard to promote the NIDA’s fortunes against the background of a general decline in cycling due to increasing car ownership against the backdrop of the 'Troubles'. To mark his service he was presented with the prestigious Certificate of Merit Award and was also made a permanent Vice-President.

When Billy finally retired from the committee in 1999, he had served for an extraordinary 50 years. Ever generous, Billy presented the perpetual President’s Cup to be awarded annually to the person who had contributed most to cycling in Northern Ireland in the past year.

As well as being a member of the elite 250,000 lifetime mileage group, outside the NIDA he was the cycling representative on the Northern Ireland Road Safety Council and in this role he was instrumental in organising the annual Northern Ireland Cycling Proficiency Tests for school children in conjunction with the police and local authorities. For a period he represented cycling at the Ulster Society for the Protection of the Countryside. 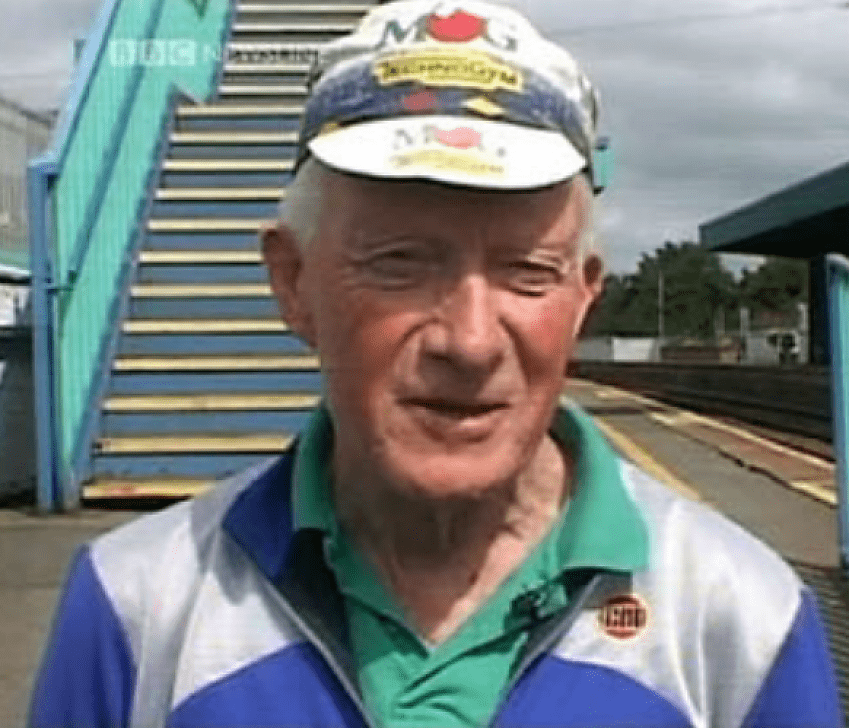 Billy also had a passion for steam railways, and was a pioneer of the railway preservation movement in Ireland, and author of two books on Northern Irish railways. His most significant contribution to the railway preservation movement came in the early 1960s, when substantial sections of the railway network were being closed. Realising that many young people would soon never be able to experience travel by 'steam'. Billy stepped in when the British Aluminium Works Railway at Larne closed in 1961 he bought their steam Locomotive No 1 as scrap.

With the help of a few enthusiast friends he restored the locomotive and built a short narrow gauge railway track in the back garden of his family home at Kings Road, Belfast! The project was completed by the acquisition of two wagons fitted with benches to carry passengers.

Once the “Kings Road Railway” was operational, Billy ran a number of open days each year with various charities benefiting from the proceeds. The railway continued to operate until the early 1970s and in latter years the engine and wagon served on the Giant’s Causeway and Bushmills Railway.

Billy was also a keen photographer and documented many of his cycling and railway activities in still photographs and cine, including the operation of a number of surviving railway lines; two BBC TV programmes were based exclusively on his material in their local series 'Super 8 Movies'.

The death of his brother triggered his work for cancer charities. In 1990 he cycled from John O’Groats to Lands’ End to raise funds. This was taken up by BBC Radio Ulster when Billy phoned in daily to report on his progress. The following year saw him undertake an epic cycle trip around the nine counties of Ulster for Marie Curie Cancer Fund.

A remarkable life. We’ll be lucky ever to see the likes of him again.