Cycling UK’s senior project officer, Lynnette was one of 70 cyclists taking part in the fifth annual Jo Cox Way in memory of the Yorkshire MP. Not only did she help organise the ride, but also overcame a 3am fire alarm, Storm Evert and a shoe disaster to complete the route from Yorkshire to London

There were scenes of celebration when the group of 70 tired but jubilant cyclists arrived in Flat Iron Square in Southwark, south London on Sunday 1 August. They were greeted by Kim Leadbeater MP, sister of Jo Cox, who has just won the Batley and Spen seat her sister held until her murder in 2016.

Kim was with the group when they set off from Cleckheaton in West Yorkshire four days earlier, riding with them for the first day.

Also in the group was Cycling UK senior project officer Lynnette Evans, taking part for the third time. Lynnette has been involved with the ride from the start as she helped to organise the Jo Cox Way with local business executive Sarfraz Mian in 2016.

Lynnette said: “He wanted to do something positive to counteract the negativity following Jo’s tragic death. Knowing that Jo was keen on cycling he thought it would be the ideal way to bring people together.

“So I had the idea of riding from Jo’s constituency area in West Yorkshire to London, to mirror the journey she took when she became an MP.”

The idea of the ride resonated with people and it has grown year on year to the point where 70 cyclists of mixed abilities signed up this year, following a virtual event in 2020 when participants logged the equivalent of riding around the world. Following Kim’s involvement, the ride became linked to the #MoreinCommon movement and the Jo Cox Foundation. It was important to the organisers that people of all abilities were able to take part.

Lynnette said: “We set off from an athletics stadium which is used for adaptive cycling sessions. It links to a traffic free route so it’s pretty much traffic free for the first nine miles before we reach the open road. This meant we could involve a range of different abilities at the start of the ride.”

Before long, the group reached the open road and the hilliest section of the ride with Buxton in the Peak District as the first destination.

It was gruelling. When the storm hit there was a torrential downpour for several hours so I got completely drenched. That was a test for all of us as road conditions deteriorated

Lynnette said: “The route was designed to go through countryside and avoid main roads as much as possible to appreciate the best of rural England. But we couldn’t avoid hills!”

After a short while the group split into smaller groups of riders based on similar riding style and speed as they settled into a comfortable pace.

Each small group was led by a ride leader with experience of club riding and Lynnette served as backstop for her group to make sure no-one was left behind. Support vehicles and mechanics were also on hand to help with any emergency repairs or to hand out emergency snacks. Riding as a group proved to be a motivation boost for less experienced riders, as Lynnette said:

“The hills and distance were challenging for people who weren’t used to that but the group setting helped encourage anyone who was flagging.”

As well as having to contend with the long distances each day, the weather proved something of a challenge to the riders when Storm Evert paid a visit to the Midlands.

“It was gruelling. When the storm hit there was a torrential downpour for several hours so I got completely drenched. That was a test for all of us as road conditions deteriorated.”

Even worse, Lynnette’s waterproofs proved no match for the storm: “My waterproofs didn’t prove particularly effective with that persistent rain and with the spray from vehicles passing on the road. It was miles and miles of that before lunch and until the end of the day when it finally dried up and the sun came out.”

It’s testament to the determination of the riders that the conditions didn’t cause any of them to drop out of the ride, although the overall pace reduced due to the road conditions.

There was more drama to come when the fire alarm in their accommodation sounded at 3am on their final night.

“It was ear-splitting, we were outside for a while in the middle of night, totally exhausted. There was smoke coming from a room and a certain amount of panic until it became clear that there was no-one in that room.”

The cause? An overheating battery on an electric bike conversion. After the local fire service attended, the relieved cyclists were given the go-ahead to return to the building to resume the sleep they badly needed.

For Lynnette there would be just one more minor setback before reaching the finish line: a footwear emergency.

“I had my shoe disintegrate! They were quite old shoes with cleats. When I stopped and unclipped them I realised that the sole had come off completely. The glue must have failed which may have had something to do with the heavy rain.”

In the spirit of improvisation, Lynnette was able to reattach the sole using gaffer tape and cable ties with an overshoe borrowed from another rider to hold her unconventional cycling shoe in place. So the final day of the ride saw her revert to flat pedals and trainers to take her to London. 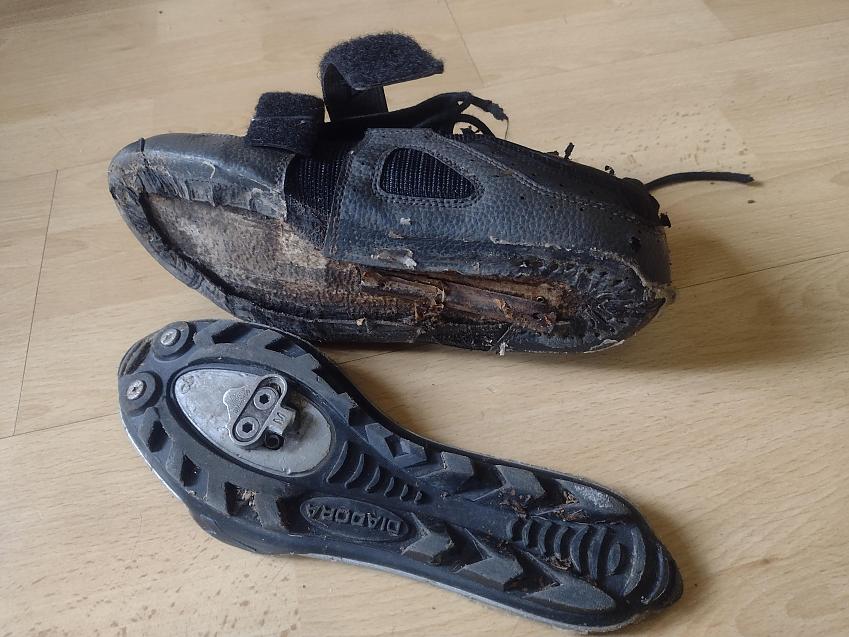 Arrival at the finish line in London was an emotional experience for the riders.

“It was really special – there was a big floral arch for us to cycle through and we had the chief executive of the Jo Cox Foundation there and a samba band with dancers as it was also the launch of the Great Get Together, another initiative to encourage people to come together in communities.”

“We had pizza which was lovely and we were able to relax and enjoy ourselves. The floral arch and our pink jerseys were quite a visual spectacle so we really made an impact.” 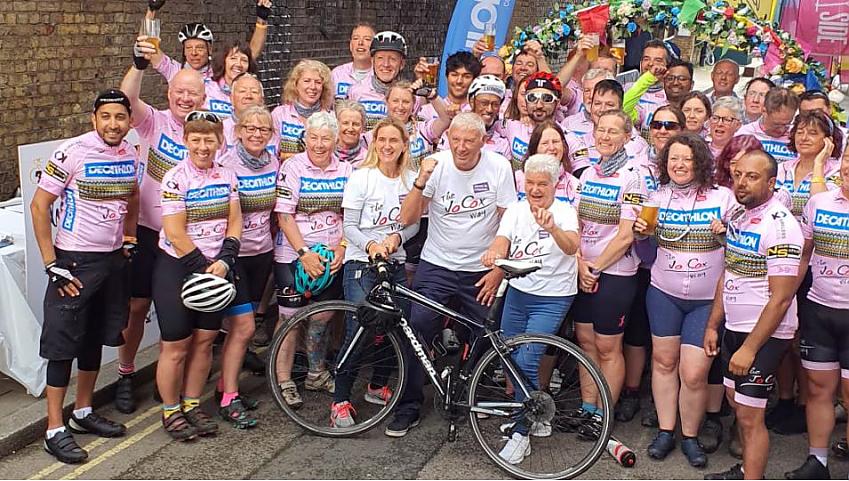 Advice for cycling from London to Paris View