Cycling UK member Jon Woodcock set off In Pursuit Of Spring today (Thursday 6 April) – retracing a cycle ride completed over a century ago by one of Britain’s most revered First World War poets. Jon is following in the footsteps – or tyre treads – of Edward Thomas, who pedalled from his home in Clapham, South London, to Kilve, on the Somerset coast, in 1913.

Thomas embarked on his journey because he wanted to record the easterly advance of Spring across the country, taking photographs and notes along the way. The result of his endeavours was a popular and beautifully-written book entitled In Pursuit Of Spring, which has recently been reprinted in paperback by Little Toller Books, with the addition of several previously unseen photographs which had been archived at Cardiff University.

Jon started his own 'Pursuit Of Spring' today (Thursday 6 April), pedalling the same 200-mile route as Thomas and plans to finish in time to mark the 100th anniversary of the poet’s death on the Western Front on 9 April, 1917.

Jon, from Reading, said: “Although a long-time regular cyclist I am relatively new to cycle touring, having caught the bug last year after riding from the most westerly point of mainland Britain at Ardnamurchan in Scotland, to the most easterly, Lowestoft in Suffolk.

“I had been thinking about what trip I could do this year when a book at my mother-in-law’s caught my eye because of the cover image showing an old photo of a man with his bicycle.

“The book turned out to be In Pursuit Of Spring by Edward Thomas, who was a literary critic, essayist and poet with an interest in natural history and landscape. I have a background in ecology and archaeology so the book was instantly appealing.

“It reveals a countryside of a century ago which is almost unrecognisable, and yet the detail with which he describes it has allowed me to plot his route almost exactly," Jon said.

“I thought it would be interesting to see how the countryside, villages and roads have changed in the past century. For example, he recalls and photographs the Hogs Back between Guildford and Farnham as a quiet country road – a road that now, as a cyclist, I avoid like the plague because of the traffic!"

The journey ticks many other boxes, too. Obviously I love cycling, and Edward Thomas also talks about the multiple pubs he found in the villages he passed through. I don’t know how many exist now, but it will be fun to find out!

“I think the reason Thomas went 'In Pursuit Of Spring' was that it had been a particularly grim winter. He talks about the harbingers of Spring – the early flowers, the birds, like skylarks and rooks – all of which is of great interest as I’m a trained ecologist. I also have an interest in photography and will try to recreate as many of Thomas’s photos in the same locations as possible," Jon said.

“The journey ticks many other boxes, too. Obviously I love cycling, and Thomas also talks about the multiple pubs he found in the villages he passed through. I don’t know how many exist now, but it will be fun to find out!”

Jon, who will be 46 later this month, is married with two children and works as a Team Leader for the Environment Agency, based in Wallingford, Oxfordshire.

He is a big supporter of Cycling UK’s work, adding: “I organise a ride every June during Bike Week called the Solstice Ride, from our office in Wallingford to a pub called the Black Horse in Checkendon. The ride is open to all levels with a mix of bridleways and quiet country lanes, and hopefully helps to encourage more people into cycling, both as a leisure activity and for everyday commuting.”

Jon’s 'Pursuit Of Spring' is split into three legs. He is riding from Clapham to Winchester today, followed by Winchester to Trowbridge, and finally from Wiltshire’s county town to Kilve in West Somerset. This Sunday, the centenary of Thomas’s death, Jon will cycle to some of the places the poet visited in the Quantock Hills.

Second Lieutenant Philip Edward Thomas was 39 when he was killed at the Battle of Arras on Easter Sunday, 9 April 1917, soon after he arrived in France. Thomas, whose most famous work was Adlestrop, is commemorated in Poets’ Corner at Westminster Abbey.

Jon isn’t the only cyclist paying tribute to Thomas. Also going in pursuit of 'In Pursuit Of Spring' is Cally Callomon, President of the Veteran-Cycle Club.

I organise a ride every June during Bike Week called the Solstice Ride, from our office to a local pub. It is open to all levels with a mix of bridleways and quiet country lanes, and hopefully helps to encourage more people into cycling, both as a leisure activity and for everyday commuting.

While Jon is riding a 2013 bike he built up himself on a Genesis Equilibrium 853 frame, Cally’s steed - a 1910 Royal Enfield - and his period attire would be instantly recognised by Edward Thomas himself.

Jon was put in touch with Cally after contacting publisher Little Toller Books about the newly-reprinted book, and travelled to Clapham last month to wish the vintage cycle expert well as he left Thomas’s old address in Shelgate Road with Veteran-Cycle Club colleague Geoffrey Everett-Brown, en route for Somerset.

Last year, Cally was asked to write a review of the republished In Pursuit Of Spring which, in turn, caused him to want to re-ride Thomas’s entire journey and, like Jon, record the staggering difference a century has created between the two routes.

Cally added: “I would like to end the journey by cycling on to Edward Thomas’s gravestone in Agny, France, to lay fresh spring daffodils and recite the poem ‘Killed In Action’ by the Welsh tramp poet W.H. Davies, written for Thomas who had so cultivated Davies’s own career.”

Cally owns around 100 cycles – the most modern a steel of 1970, the oldest dating from 1840. In addition to his role as President of the Veteran-Cycle Club, the largest of its kind in the world, Cally is manager of The Estate Of Nick Drake and lives in Suffolk – next door to the village of the late Edward Thomas, grandson of Thomas the poet. 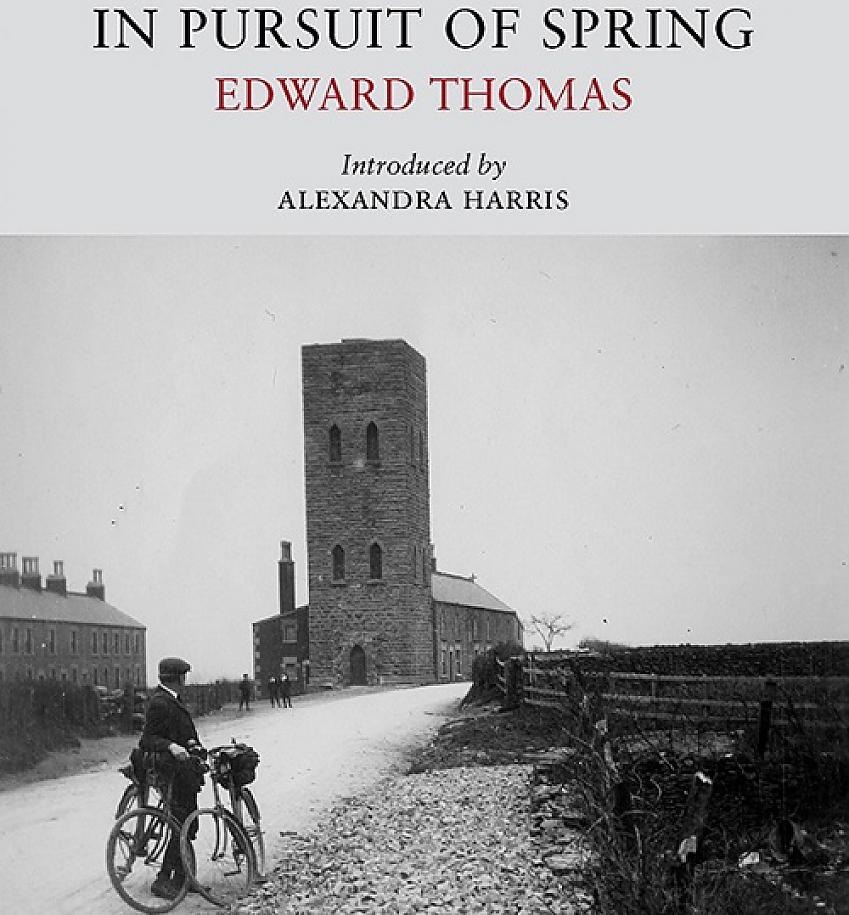