Cyclists taking part in the Ride to the Somme 2016 event arrive at The Memorial to the Missing at Thiepval in France
By Tony Upfold
Friday, 11 November 2022

Dozens of Cycling UK members served in the Cyclist Battalions which fought during the First World War. Tony Upfold reflects on the role of Cycling UK, then the Cyclists' Touring Club, and its members

“Cycling for pleasure and cycling with the Army cyclist’s full equipment are two very different matters. Indeed, there is a wide gulf between the two. If you don’t believe it get into khaki at once and join a cyclist battalion!”

So wrote Lance Corporal A. S. for the benefit of his fellow CTC members 100 years ago in an article entitled ‘With the Cyclists in Khaki’. We don’t know the author’s full name. We do know he was one of dozens of Cycling UK members who served in one of the Cyclist Battalions which fought during the First World War.

Each Armistice Day at 11am the nation falls silent for two minutes to remember Lance Corporal A.S. and millions like him, who have fought and died in conflicts around the globe during the last century. As part of the commemorations on 11 November every year, wreaths are laid and cyclists stop to pay their respects at the Cyclists’ Memorial, erected in 1921 on the village green in Meriden, West Midlands - the centre of England.

…cyclists have proved themselves a very mobile and useful branch of the Army, and a company of good riders and excellent shots can prove themselves the right men to get to the right spot in quick time

Lance Corporal A.S. writing in the CTC Gazette in December 1916

Whether Lance Corporal A. S. survived the conflict is unknown, but in the December 1916 issue of the CTC Gazette he was very much alive and giving his fellow cyclists an insight into his life in the Army. He wrote: “…cyclists have proved themselves a very mobile and useful branch of the Army, and a company of good riders and excellent shots can prove themselves the right men to get to the right spot in quick time.” He explains that “strength and endurance are two of the chief requisites” of being a cycling soldier. The third requisite he doesn’t mention is courage.

Some of the most brutal fighting of the First World War took place in 1916. On 21 February the Germans began their attack on Verdun, which was ultimately defended by the French in the longest battle of the war that finally ended on 18 December, at great cost to both sides. The biggest naval battle in history also took place that year, at Jutland. But one name resonates louder than any other from 1916 - the Somme.

The Battle of the Somme began on 1 July, sparking 141 days of horror as the British and French fought the Germans on a 15-mile front. That first day has gone down as the bloodiest in British military history, with 19,240 of our soldiers killed and nearly 40,000 injured. By the time the Somme Offensive ended on 18 November, there were over one million dead and wounded on all sides.

Three CTC Rolls of Honour were published in the club’s monthly Gazette during 1916, listing the names of 103 members who had been killed in action.

The March issue also included an appeal for members to continue their support of the club, stating: “If the CTC were to fail us now, there is no other organisation to take its place.

“For the moment, the Club’s activities are naturally characterised by quietness, but we are inclined to believe that the time may come when a strong cycling organisation will again be needed to bear a hand in fighting the cyclist’s battles, and perhaps the need will be greater than ever before. For instance, signs are not lacking that an attempt will be made to stampede the authorities into giving the rear-lighting of cycles a permanent place in the legal code of this country.”

By the end of the war, membership of the Cyclists' Touring Club had dwindled to just 8,546. Although the club recorded a profit of £43 13sh 6d in 1916, that was the last time the finances were in the black for five years.

A century ago, the CTC Gazette was also encouraging members to collect eggs for the sick and wounded soldiers in the nation’s hospitals, as by this time there was a serious egg shortage.

There were adverts for linen or paper War Maps, published by Messrs John Bartholomew and Co, which could help members identify battle sites across Europe, and appeals for donations to the National Cyclists’ Union, which was supplying food parcels for cyclist PoWs – CTC members among them.

There was still time for cycling as well, with hundreds attending the Northern Old-Time Cyclists’ Rally at the Ring o’ Bells, Daresbury, Cheshire, on Sunday 27 August. But the war was never far away and £30 was collected in donations for the Cyclist Prisoners of War Fund. 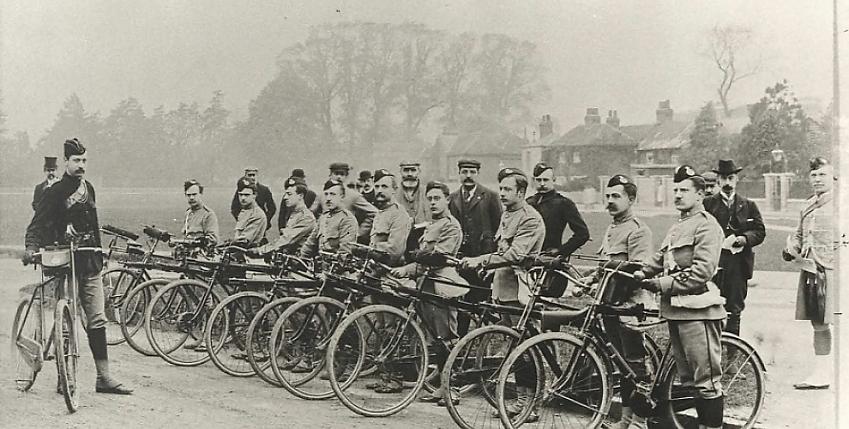 As well as the Remembrance Services being held this weekend, there are other opportunities for Cycling UK members to pay their respects to those cyclists who lost their lives in action.

Hi Tony Upfold, Do you have a

Do you have a list of CTC members who served and who died in WW1?