Family, friends and former colleagues gathered to pay tribute to Gordon and watch his sister, Ros, perform the unveiling ceremony.

Gordon died in November 2007 but is still fondly remembered by many, and now there will be a permanent reminder of the man who worked tirelessly for the benefit of his local community and beyond.

At the time of his death, aged only 58, Gordon was Councillor for the West Midlands Region for CTC – now Cycling UK, the national cycling charity.

He was also a Trustee of the Cyclists’ Defence Fund, held seven other CTC voluntary campaigning posts at local and national level, volunteered for at least six more charities, was an elected member of Bromsgrove District Council and was a nationally-recognised expert on rail issues, with an unparalleled knowledge of legal matters.

Among the campaign topics close to his heart were better cycle-rail facilities both nationally and locally, and an improved train station for Bromsgrove’s commuters – which has now become reality.

The idea of a commemorative plaque at the redeveloped station was inspired by Carol Selway-Street, the daughter of Roy Selway, a cousin of Gordon.

Carol contacted Cycling UK, which fully backed her idea of a tribute and set the wheels in motion, bringing various parties together to make last Friday’s unveiling ceremony happen. Coordinating and organising proceedings at Cycling UK's end was Cherry Allan, our Campaigns and Policy Information Coordinator.

Gordon was one of the most public-spirited people I’ve been privileged to know, and he is still greatly missed. He was indefatigable in his commitment to the causes of cycling and sustainable transport, and to the fairness of public policy and the rule of law.”

Also there was Roger Geffen MBE, Cycling UK’s Policy Director, who said: “Gordon was one of the most public-spirited people I’ve been privileged to know, and he is still greatly missed. He was indefatigable in his commitment to the causes of cycling and sustainable transport, and to the fairness of public policy and the rule of law.

“He devoted vast amounts of both his time and his extraordinary intellect to his roles as a trustee of both CTC, now Cycling UK, and its Cyclists’ Defence Fund. He was every bit as committed to Birmingham’s Push Bikes campaign group, the Campaign for Better Transport, the Campaign to Protect Rural England and his role as a Lib Dem councillor.

“I’ve no idea how he found time for all that he did – particularly given his incredible attention to detail in every issue he touched. His refusal to let his own health problems stop him from contributing to a better world was truly inspirational.”

It was regarded by many as fitting at the time that Gordon passed away on a train, having cycled to the station that morning. He had several health issues which generally he chose to ignore.

Born in Bromsgrove, Gordon attended King Edwards’ Birmingham on a scholarship and moved on to another scholarship at Oxford where he read classics. After a spell of teaching Latin and Greek, he went into a legal career until ill health forced him to return to Bromsgrove in the late 1980s.

Below: Andy and Carol Selway-Street with Gordon's sister Ros Roland and her husband Paul 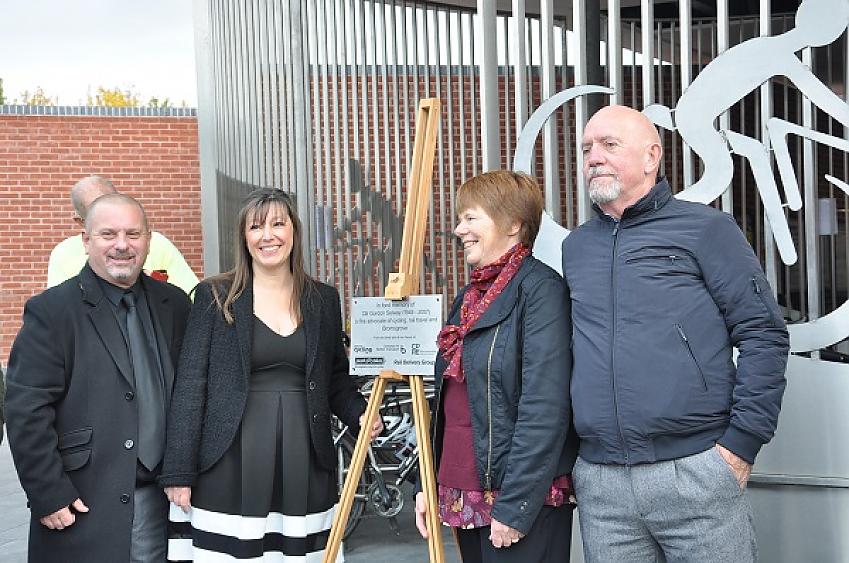 He loved the independence of cycling and from his teens would disappear for several hours and not tell the family where he had been. On one occasion, when he was doing A-levels and also studying footpaths in the area for a Scout award, he crashed into a barrier in the dark, fell off his bike and was taken to hospital. The next day a teacher brought his exam paper to the house, which Gordon completed despite his injuries.

He played the piano, organ, violin and sang in various choirs, but most will remember Gordon for his prodigious intellect, ranging across policy, political and social history, classics, the law and his Irish and Scottish heritage, which he could debate with vigour and good humour.

He was also considered something of an eccentric. He wrote everything with a fountain pen using green ink, was possibly the only person in the country to have a walking stick strapped to the crossbar of his racing bike, and was devoted to his many cats.

At his funeral, Kevin Mayne, CTC Director at the time, recalled: “Any minute now we expect him to crash his bike through the door, announce that he was late because of some enormously complicated failure of the rail system and leave early because he has another three meetings to fit in.”

Nine years on, people still have vivid memories of Gordon. Roger Geffen added: “From my own perspective, his most important legacies are his role in setting up the Cyclists’ Defence Fund and in launching CTC’s parliamentary petition on the Crossrail Bill. That led to Transport for London taking up a whole series of initiatives to tackle lorry safety, not just on the Crossrail project but for all lorry contract work in the capital.

“The Construction Logistics and Cycle Safety (CLoCS) project came about as a result of that petition, and I am optimistic that we will soon secure a commitment to equally good practice in lorry safety on the High Speed 2 rail project and elsewhere. In short, Gordon’s actions must have saved plenty of cyclists’ lives already, and his work very definitely lives on.”

My abiding memory of Gordon is of his riding his bicycle along the corridor of the Council House right up to the council chamber, parking it at the door and taking his seat at full council meetings still in his shorts and tee-shirt. It certainly got him noticed as a district councillor!”

Andre Curtis, former Chair of Cyclenation, a federation of local cycle campaign groups, said: “Gordon steered the incorporation of Cyclenation as a limited company, which very much helped strengthen local cycle campaigning. I still miss his wise advice and there are times when I think I could do with consulting him right now. He had such detailed knowledge and abilities that no one has been able really to step into his shoes.”

Neville Billington, of the Bromsgrove Society and a friend of Gordon, said: “I first met Gordon about 25 years ago. He was intensely interested in the expansion of rail travel but he was also extremely committed to promoting the benefits of cycling to the wider public. The bicycle was certainly Gordon’s preferred mode of personal transport.

“When local people in Bromsgrove formed a lobby to get a major upgrade of the railway station, Gordon formed half of a two-barrister team working in an entirely voluntary capacity on the project, a partnership that was, in conjunction with others, absolutely invaluable in getting difficulties ironed out.

“At the time of the 150th anniversary of the arrival of the railway to Bromsgrove in 1990, Gordon and I did a cycle ride both ways along roads and lanes as near as possible to the Birmingham and Gloucester Railway Company’s line between the two cities. We cycled from Bromsgrove station to Birmingham city centre then down to Gloucester Station and finally back to Bromsgrove. This added up to 100 miles. He was good company ‘awheel’.

“He was a councillor with Bromsgrove District Council and undertook voluntary work for the County Council, not least helping with the County’s cycle ways, surveying and mapping. Gordon was a keen worker for the community and an outstanding intellectual.”

Janet King, Chair of Bromsgrove Lib Dems, said: “My abiding memory of Gordon is of his riding his bicycle along the corridor of the Council House right up to the council chamber, parking it at the door and taking his seat at full council meetings still in his shorts and tee-shirt. It certainly got him noticed as a district councillor!

“More seriously, as secretary of CPRE Bromsgrove he campaigned and wrote for good planning decisions, going into meticulous detail when commenting on a planning application and always insisting on fairness, the preservation of our green countryside and the protection of the Green Belt.”

Ironically, Bromsgrove railway station was closed to trains because of engineering works when the plaque - which will eventually be fixed in the cycle parking area -  was unveiled. A replacement bus service for passengers was running instead.

No doubt Gordon would have seen the funny side of that on a day when his dedicated campaigning work and unique personality were officially celebrated by his many friends and admirers. 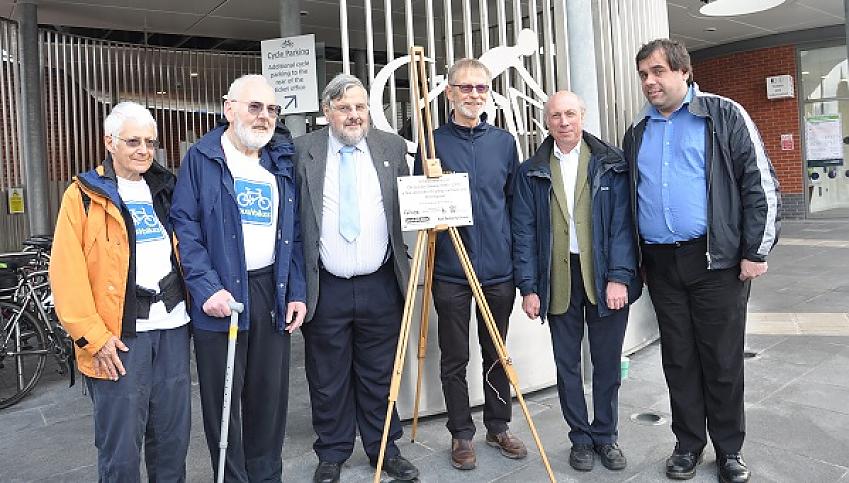