Come and pay a visit to the CTC stand at the London Bike Show
By Tony Upfold
Friday, 12 February 2016

From fast bikes to fat bikes, from gear you wear to gears you shift, cycling takes centre stage this weekend at the London Bike Show. Thousands of cyclists will be flocking – or, in many cases, pedalling – to the ExCeL arena today, tomorrow and Sunday to explore what’s on offer from more than 150 exhibitors.

On show are bikes for touring, leisure, off-road, commuting and racing – and pretty much any other form of cycling you can think of – plus all the kit and accessories you could shake a bicycle pump at.

Cannondale, Cervelo, Elephant, Enigma, Giant, GT, Lezyne, Lumo, Orbita, Orro, Specialized and Schwalbe are among the dozens of companies displaying their wares – a few of them reassuringly retro, some of them standard with a modern twist, and others out-and-out cutting-edge technology. Whether you want your machine sleek, unique or freak, it’s probably there!

CTC obviously has a strong presence, with a stand spreading the word that we are cycling in the UK. At yesterday’s trade and media day, we told people about the vital role we play as the national cycling charity – how we offer advice and support to all cyclists, campaign for improved cycling facilities and provide a range of great benefits to our members.

If you weren’t one of CTC’s eagle-eyed members to take advantage of the 15% discount on adult tickets, there is still the opportunity to do so if you book your ticket online up until the day before you go. So don’t delay if you plan a visit!

The CTC stand is LB1351 on the site map – and make sure you give our ever-popular ‘Wheel of Chance’ a spin when you come and say hello, with a prize guaranteed every time. 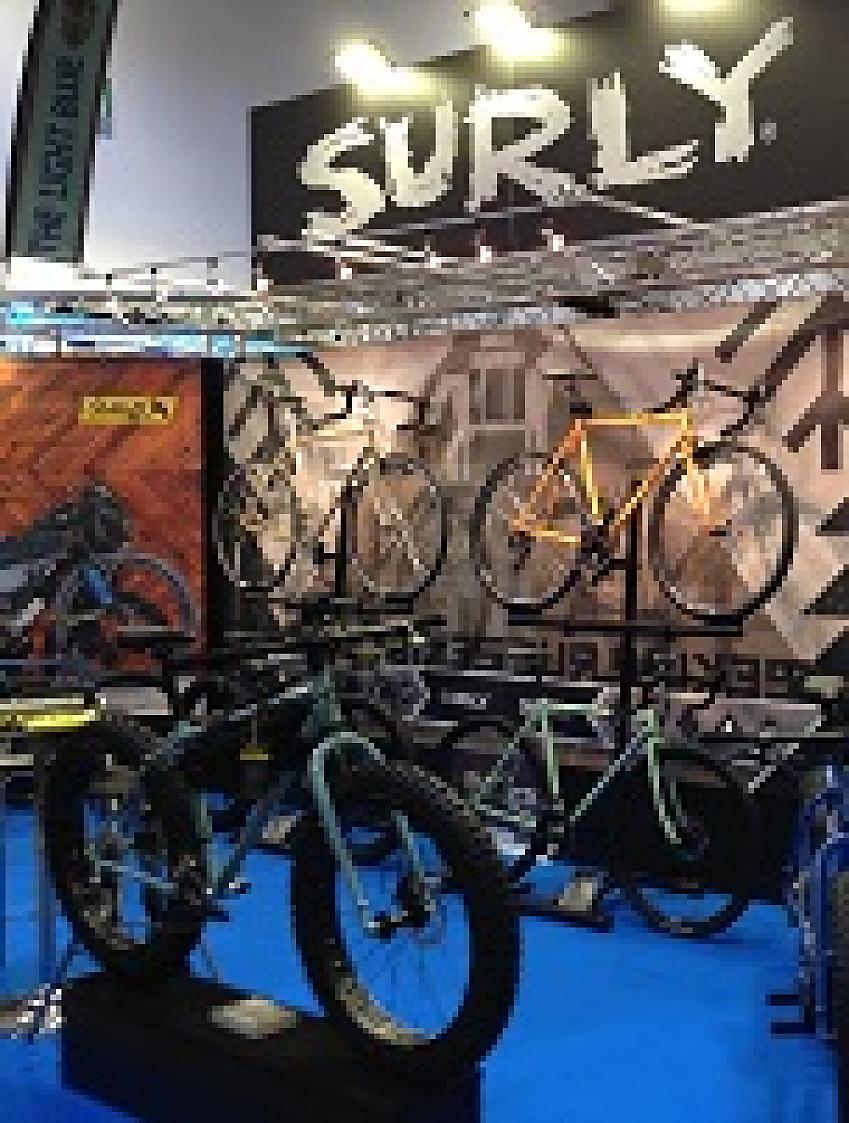 Among the goodies on show at the ExCeL is the latest beast from Surly, sporting tyres that would do a motorbike proud. Surly is famed for its touring bikes, but the US company also made the first fat bike 11 years ago - deemed so ugly it was named ‘Pugsley’ after the oldest child of those funny horror fiction freaks the Addams Family!

The new member of the Surly fat bike family is called Wednesday – named after Pugsley’s sister.

“Pugsley was the original fat bike. After tweaking and twisting, Wednesday is the pinnacle of everything we have learned in the 11 years since,” said Patrick Joscelyne, Sales and Brand Manager for Ison Distribution, managing the Surly stand.

The Wednesday has a double-butted steel frame, double chainset and 20 gears, with clearance for 5” inch tubeless tyres up front and 4.6” out back on an 80mm rim – if that’s what tickles your fancy.

A Surly usually appeals to those with some mechanical experience – and the Wednesday is no exception. It is ready to be customised if required, whether you buy the bike as displayed (at £1,500) or the frame on its own.

Patrick added: “The Wednesday is all about: Let’s go out and have some fun!”

If fat bikes and adventure off-road cycling are your thing then it could be worth your while heading over to relative new comer to the cycling world, Alpkit.

Alpkit was originally set up by a group of friends who shared an enthusiasm for the outdoors but like us all found replacing their kit an expensive pursuit. Rather than complaining about it, they set about designing and manufacturing what they needed and over the years have gone from down sleeping bags to cooking kit and now to bikes and bike luggage, all at very reasonable prices.

It’s the luggage which interested us most. Alpkit offers a lightweight and cheap alternative to the more traditional pannier and handlebar bag. As they’re designed for the violence of the wild, while you won’t be able to pack the kitchen sink, they’re robust and simple to use. 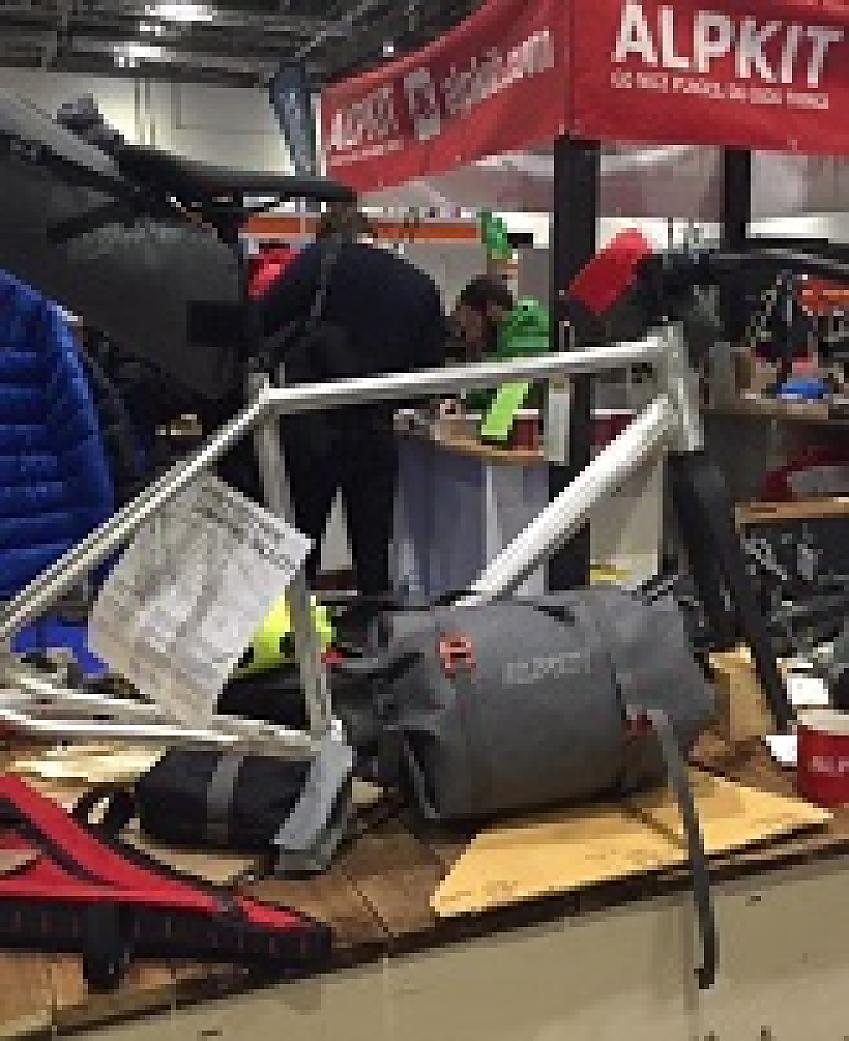 Their handlebar bags are for those seeking to travel light. Essentially dual-ended stuff sacks, they come in a range of colours in 13 and 20 litre sizes, priced very reasonably at £11 and £13.50 respectively. The larger Airlock Dual 20L should easily fit a sleeping bag and light weight bivvy bag, and looks as though it would fit comfortably either fore or aft of your steed. If you’re at the show there’s a further 10% discount on their entire stock just in case they’re not cheap enough!

While kit abounds for the cyclist, it is also worth checking out some of the interesting developments in lorry technology.

Just round the corner from the CTC stand there are two HGVs which are worth a visit. If you’ve never sat up in the cab of a lorry it’s an experience CTC would recommend to all cyclists.

Up high you suddenly realise how little you can see of the immediate road around you. It’s a useful lesson, though in the case of many modern cabs – as will be pointed out – there are now additional mirrors, sensors and cameras to help the driver keep aware of his surroundings.

However, while extra cameras, mirrors and sensors can be retro-fitted and improve all lorries, from CTC’s perspective they’re not the ideal solution. Far better would be a lower cab allowing for direct vision akin to many buses.

Only two companies, Dennis Eagle and Mercedes, are currently producing such designs, and Mercedes’ version is on stand for all to see.  We’ve been campaigning for these via our Road Justice campaign and hope to see more of them used on the UK’s roads, particularly for Government projects like HS2. 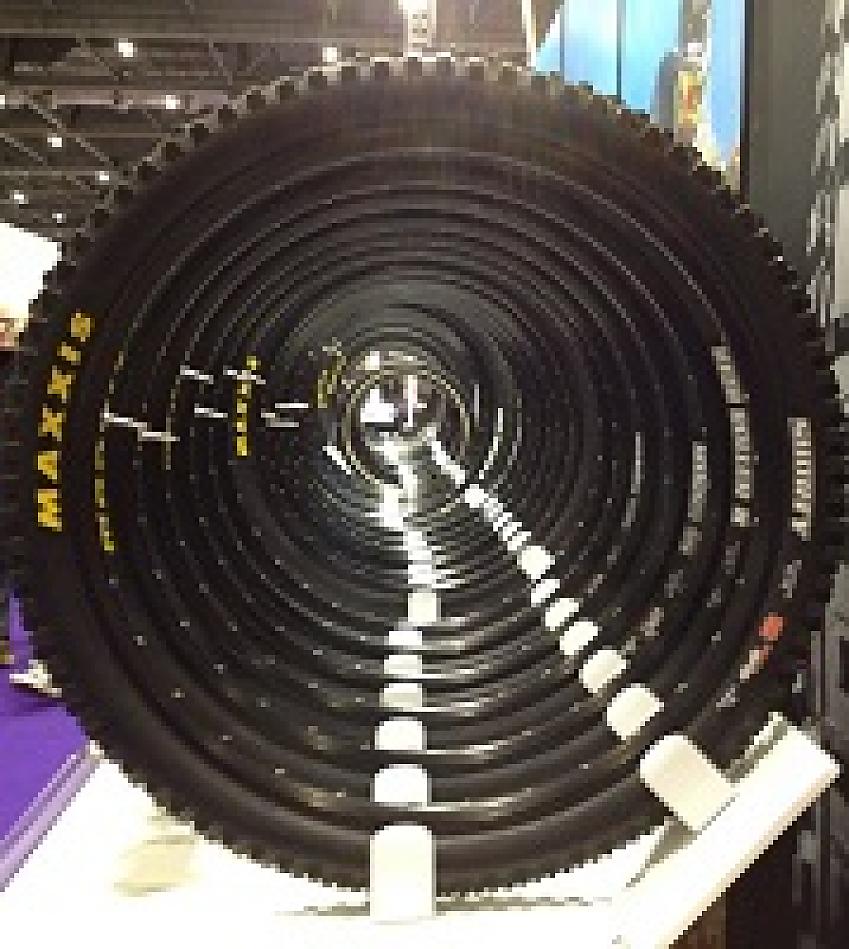 Other London Bike Show highlights include Air to the Throne – the UK’s most exciting freestyle MTB competition, with 30 of the world’s best freestyle mountain bike riders going up against each other for a prize pot. Demos take place today with the competition tomorrow and Sunday.

There are also Q&As over the weekend with several cycling legends, including Sir Chris Hoy and Chris Boardman tomorrow.

A ticket to the Show also provides access to the Triathlon Show: London, The Telegraph Outdoor Adventure & Travel Show and the London International Dive Show.

One word of warning, though…keep that bank card hidden away, you’ll be tempted to buy everything!