Over 100 people gathered for the launch of Bike Week at the Dutch Embassy
By Sam Jones
Wednesday, 10 June 2015

The launch of Bike Week, which officially begins this Saturday, is traditionally hosted by the Dutch Embassy in London and coincides with the annual MPs' bike ride to Parliament. Wednesday 10 June was the day, and CTC’s Sam Jones was there to report on events.

MPs, Lords and the great and good of the UK’s cycle world gathered this morning (10 June) at the Dutch Embassy in London for the CTC organised launch of Bike Week (13 – 21 June).

Despite the early start, the turnout was high with over 100 attendees arriving at the Embassy, where the courtyard soon struggled to hold so many assorted cycles. Cycling Minister Robert Goodwill MP arrived by what appeared to be the bicycle of choice, a Brompton. He was joined by 15 other MPs including former All Party Parliamentary Cycling Group (APPCG) stalwarts Ian Austin MP and Dr Sarah Wollaston MP, plus parliamentary newcomers such as MP for Cheltenham, Alex Chalk.

Her Excellency the Dutch Ambassador Laetitia van den Assum, who will soon be taking up a new post in Denmark, opened the launch saying how “cycling is the great equaliser”, and was followed by Robert Goodwill.

The Minister readily recognised that the UK has a long way to catch up with the Dutch standards for cycle provision, and said the Government was committed to maintain the standard it had set in the previous parliament to achieve this. He said he wanted to see more cycling become a normal activity such as it is in the Netherlands.

The Minister said there was funding for cycling available and “we need to move to £10 per head”. Fellow Conservative, and former Treasurer of the APPCG, Sarah Wollaston MP, welcomed the Minister’s announcement on Twitter, but politely emphasised the urgency of an increase in funding levels by saying this should be “now please!”.  However, the Minister’s announcement of the availability of funding was greeted with scepticism by many, as last week saw  £23m sliced off the thin funding slither of £114m allocated through the Cycling City grants in November last year - the only real long-term funding commitment to cycling. 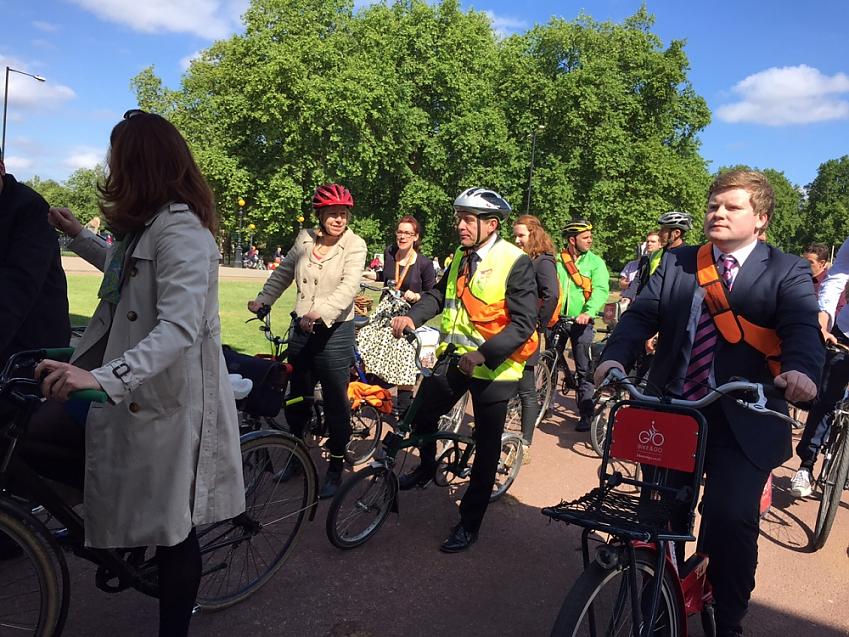 The Minister laid the blame for cycling’s funding situation firmly at the doors of HM Treasury saying twice that pressure needs to be maintained on the Chancellor, George Osborne MP, and his department. As core departments are having to make massive cuts, such as Health (£200m), it is to be hoped the Minister’s optimism at finding funding for cycling is not just rhetoric but a matter he can deliver on in the very near future.

Co-chair of the APPCG in the last parliament, Ian Austin MP, outlined the group’s next steps for the next five years, aiming to build on the success of their Get Britain Cycling report and see cycling become 10 per cent of all trips by 2025 and 25 per cent by 2050. The APPCG will begin its work in earnest following its AGM later this month.

Shortly after the speeches, the MPs' ride headed out from the Dutch Embassy situated on the South Side of Kensington Gardens, London and sedately wove its way through the traffic (with photo stops) towards Parliament Green. While the ride was largely without incident and accompanied by two police officers, a minority of London drivers demonstrated a situation familiar to all people who cycle regularly by overtaking riders too closely and irately sounding their horns.

It is to be hoped such behaviour towards a law-abiding ride will resonate with the Minister, and reinforce his own backbenchers’ call for action now (please).

Bike Week has been running for since the 1980s, and aims to demonstrate how convenient it can be when you make the switch to cycling. This year, the focus is on commuting and CTC will be delivering a packed calendar full of events and helpful tips on how to make the change to two or three wheels. To find out more, see www.bikeweek.org.uk