Riding into the past
By cotterell
Monday, 1 June 2015

Sam Jones cycles from London to Guildford to celebrate CTC’s heritage, finding en route echoes of the journey described in HG Wells’s The Wheels of Chance.

CTC has a rich history. We’ve been promoting cycling for travel and transport since 1878, ensuring that the voice of the everyday cyclist is listened to. In 1888, CTC saw to it that the Local Government Act declared cycles ‘carriages’, with the right to use our roads. In 1899, CTC championed women’s rights, defending Lady Harberton’s decision to wear ‘rational dress’ for cycling. This ethos continues today. While the world has changed greatly in 137 years, many of the early battles CTC fought still resonate.

Through Space for Cycling, we are still fighting to make our roads suitable for cyclists of all ages, backgrounds and abilities. Through our Road Justice campaign, we are still working to ensure cyclists are treated fairly in the courts. And through our Inclusive Cycling programmes, we are still helping those who might be excluded from cycling. CTC’s heritage has shaped the charity that we are today.

Seeking to trace and celebrate this history, I donned my CTC heritage jersey one April morning and, together with colleagues Julie Rand and Robbie Gillett, headed to London to ride into our past.

A nod to Hoopdriver

Our journey would take us from London to Guildford via Godalming, visiting CTC’s former offices – and, I hoped, their Winged Wheels. Coincidentally, our route would overlap with the journey described in HG Wells’s comic novel The Wheels of Chance.

To get into the 19th century spirit, we decided to navigate not by GPS or modern maps but by replica Ordinance Survey maps donated by Cassini Historical Maps. We would also refer to The Wheels of Chance; though fiction, it describes a geographically accurate journey.

To get into the 19th century spirit, we navigated not by GPS or modern maps but by replica OS maps donated by Cassini.

The adventures of Hoopdriver, Wells’s protagonist, were published in 1896 when cycling was in the midst of its first craze in the UK. Practical and more comfortable bicycles were becoming widely available and affordable. Through cycling, Hoopdriver is lifted from the mundanity of his existence as a draper’s assistant in a Putney cloth shop and becomes a duke of the road.

Hoopdriver is a cycling novice, whose biggest difficulties are with his bicycle. A modern-day Hoopdriver would struggle on busy urban roads designed with few concessions to cycling. The motorised traffic we deal with today would be a nightmare unimaginable by the cyclists of Wells’s day.

Signs of the times

Our starting point was 139-140 Fleet Street, London EC4, where CTC’s first headquarters were in 1883. We could hardly see the road for the nose-to-tail buses, HGVs, taxis and other traffic. The offices themselves were just as hard to find: the art deco building of 135-141 Petersborough Court sits squatly where CTC began its first London residence.

With the sun shining, and our adventure only beginning, we were not daunted by this. Making a small blue-and-white peloton, we glided past gridlocked traffic, occasionally consulting our map to find our way to 3 Craven Hill, CTC’s office from 1927. 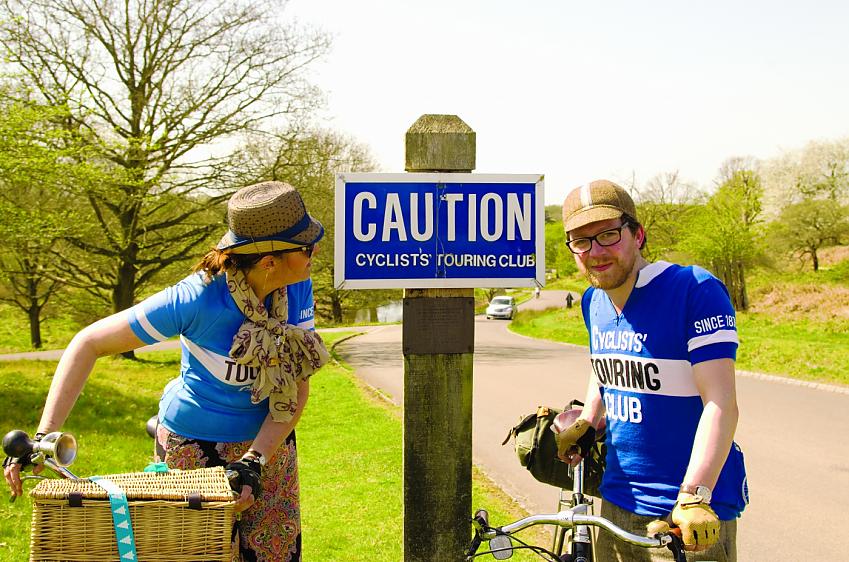 While the road layout for central London has not changed much since the production of the map we used, the lack of street names on it presented a real difficulty. A journey of a couple of miles took close to 40 minutes. We were greeted with further disappointment. Number 3 Craven Hill, while still present, albeit as smart flats for well-heeled Londoners rather than as offices, had no exterior traces of CTC. The Winged Wheel I was expecting to see was missing. Perhaps there’s one inside?

Having many miles to travel, we reversed tracks and began the slow weave through south-west London to Putney, where Hoopdriver began his ride. Finding a quiet way to Richmond Park – and a way out of London – became imperative. After getting lost using our map, we resorted to following the Thames as it meanders past Fulham FC’s stadium on the north of the river and alongside the Wetland Centre in Barnes.

En route to the park, we witnessed increasing numbers of blurs on two wheels, heading to the emptier roads and slopes of London’s largest open space. It was encouraging to see more cyclists today; in Wells’s narrative, Hoopdriver is a largely solitary fellow. But the bonhomie between cyclists you encounter on rural roads was still lacking. Most cyclists sped by with neither nod nor acknowledgement.

On our way to Ham Gate in Richmond Park, we chanced across a piece of CTC heritage, purposely preserved by the former Department of the Environment: a Caution sign originally erected in 1905 or thereabouts. In 1884, CTC had begun producing such signs to warn cyclists of steep hills and the dangers of their descent due to the poor brakes available at that time.

We had spent too many hours making slow progress through London. The cycling novice Hoopdriver had reached Guildford by 4pm. Surely we could get there before him?

Following Cassini’s road layout, we joined the A307, which soon spat us out into Esher. Being early afternoon, the traffic for such a busy road was bearable. Together with other cyclists heading towards the Surrey Hills and the Olympic Road Race route, we turned south on the A244 towards Cobham. 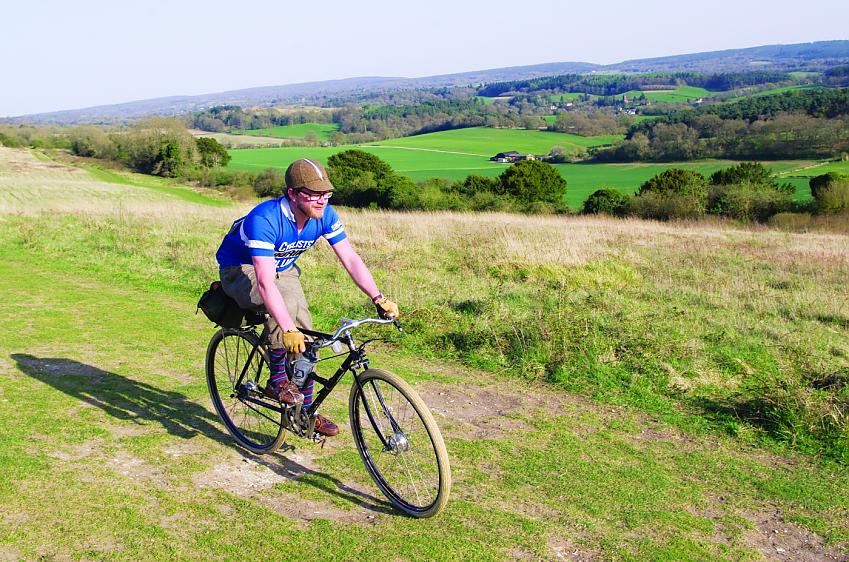 Sam on the North Downs Way. CTC fought for cyclists' right to use bridleways

Cobham proved a touch confusing, and highlighted the importance of an up-to-date map for cycling. Landmarks such as churches are normally reliable features in the built-up landscape. However, while there was a church on the map and in sight, the location of the road on paper was very different. Trusting the road’s general direction, we pedalled off until we came across another, older church, which clearly the map referred to. It gave us some hope that we were on the right way to Ockham. Shortly after this church, we turned off into the calm of Plough Lane.

There is real relief to be found off the main roads, particularly in a group. We were at last able to cycle together without continued interruption – something we had last enjoyed in Richmond Park – and we made swift work of the short miles to Ockham, crossing over the M25 orbital motorway and stopping only briefly for food and drink at the Black Swan before coming to Ockham’s Hautboy Hotel.

Back in 1898, this hotel’s refusal to serve Lady Harberton (due to her ‘inappropriate’ attire of a jacket and knickerbockers) became a famous case in the courts, backed by CTC. In many quarters, it is seen as the opening shot in the long campaign for women’s liberation. None of us could gain admittance today: it’s now a private residence.

Our route so far had largely been flat. Turning south from Ripley and crossing the A3, the North Downs crept into view. Staple Lane beckoned. While it is by no means a tough hill with even a three-speed gear, in the blazing heat of the afternoon, few would think to tackle it on an ancient singlespeed New Hudson, which is what Julie was riding. But she managed it with aplomb.

On Staple Lane, we encountered the first cyclist who wanted to chat with us. He asked what we were doing – all the while spinning a gentle gear in lycra as we huffed and puffed our way up in our woollens.

We veered off Hoopdriver’s route onto the North Downs Way. It’s a bridleway – a right of way open to cyclists since 1968."

Near the top of Staple Lane, we veered off Hoopdriver’s route onto the well-trodden path of the North Downs Way. It’s a bridleway – a right of way officially open to cyclists since 1968, after CTC campaigned for access to them. We bumped along rutted woodland tracks towards Newlands Corner and a sweeping vista across Surrey leading to the South Downs. Our legs were weary. Fortunately, our penultimate CTC office visit was a downhill ride into Godalming, albeit among commuter traffic.

Here another cornerstone of CTC history had been turned into apartments. We turned our wheels north to return to our current offices in Guildford – and the Winged Wheel we knew we would find.

Though Hoopdriver beat us by some hours in his arrival to Guildford, our sense of achievement wasn’t diminished. In one ride, we had traced CTC history, witnessed past achievements, and been riding on roads and a bridleway that, without CTC’s help, we might not have been allowed on.

Perhaps most importantly for me, working in the campaigns team, this ride reinforced for me the spirit behind what CTC is achieving. I hope we continue as a leading campaigner and charity for all cyclists for another 137 years.

This was first published in the June / July 2015 edition of CTC's Cycle magazine.

Tempted to live the tweed-wheeled dream yourself? CTC will be present at this year’s Eroica Britannia, a three-day festival in the Peak District starting on 19 June. Eroica Britannia celebrates a differing cycling era when steel was real and heroes of the road dressed only in wool. There are rides to suit all abilities, with 30, 55 and 100 mile routes, each with off-road sections. Bikes must date from before 1987. Visit eroicabritannia.co.uk for further details.

To create your own journeys with historical maps, visit cassinimaps.com. Cassini is happy to offer Cycle magazine readers a 25% discount off all products on its website, between 28 May 2015 and 31 July 2015. Simply enter the code M-CTC25 when prompted at the checkout. This is transferable and valid for any number of orders in this period. The discount applies to the products only: p&p, if applicable, is charged as normal. 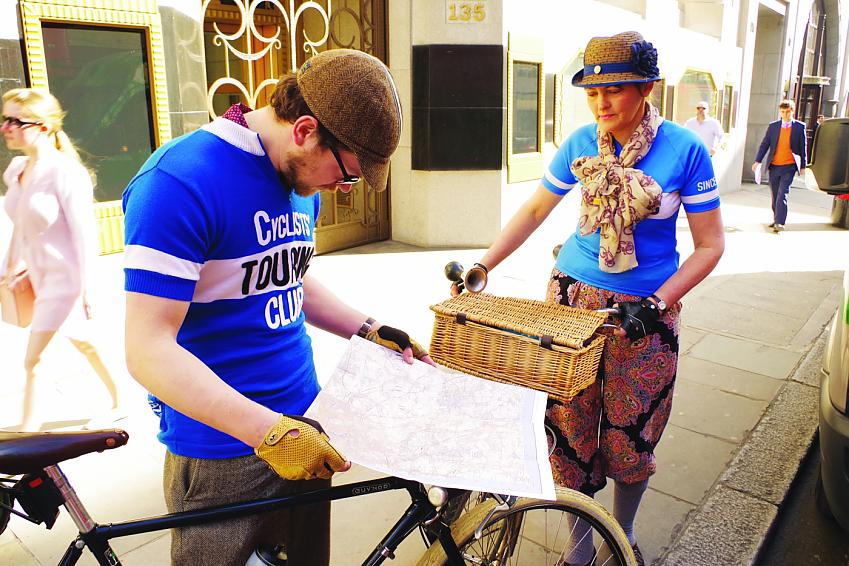 London's roads haven't changed as much as you might think, but the lack of road names on the map made urban navigation tricky.

RIDING INTO THE PAST

Start on London’s Fleet St before crossing the urban jungle via 3 Craven Hill, Putney and Richmond Park, before joining the Thames path and leaving London around Hampton Court. Continue south west, avoiding major roads and taking in Esher, Cobham, Ockham and Ripley. Skirt along the North Downs, dropping down below St Martha’s Church and wind your way to Godalming, to then turn north and head up the cycle ways towards Guildford.

Glorious sunshine, and outside of London largely blissfully empty roads with the occasional cyclist steaming by in lycra

Cassini Historical Maps. One was a personalised map just for us (‘Mr Hoopdriver’s Journey’); the other was the Revised New Series 176 – West London (1897-1909)

Good company with a spirit of adventure!

To find Winged Wheels around the UK, see the website www.wingedwheels.info. The Wheels of Chance by HG Wells is still available. I also referred to William Oakley’s The Winged Wheel.