On some tracks, a rough-stuff tourer or mountain bike is easier
By cotterell
Monday, 1 October 2012

Jack Thurston packs his bivvy bag and makes an overnight escape into the great outdoors, leaving London and heading for the North Downs with a couple of friends.

Nights in a tent in the back garden were a highlight of my childhood summers. It was just a few steps from the back door of our terraced house in north London but for a nine-year-old with a fertile imagination, camping offered a whole new world of adventure. The smell of the cool night air, the strange sounds of nocturnal birds and animals, the mysterious dew that soaked everything, the thrill of a ‘midnight feast’ and chatting with friends late into the night, far away from adult ears. On clear nights, there was the magic of the moon and stars.

A seed must have been sown in that back garden for in the years that followed I ventured further afield, going on camping trips throughout the British Isles, in Europe, the United States and Asia. More often than not I’ve travelled by bicycle, wild camping along the way.

Unfortunately, the realities of work and home life now conspire to make it more difficult to disappear on multi-day camping trips and long-distance adventures. What’s more, I’m probably a little softer than I was in my teens and twenties, when I’d think nothing of loading up my bicycle with a hefty tent, sleeping bag, stove, fuel, provisions, and clothes for all weathers, and then hauling it all off up the road to destinations unknown.

Yet my desire for the pleasures of sleeping under the stars remains undiminished. This is why, over the past ten years, I’ve taken to going for short, overnight bicycle trips: leaving after work and returning the next morning. Maverick Californian bicycle designer Grant Petersen refers to these everyday adventures as ‘sub-24 hour overnights’ (or S24Os) and it’s a name that’s stuck.

Three of us had arranged to meet for our S24O at 6pm in Parliament Square. Matt had ridden over from Notting Hill in west London, while Ed rode up from Streatham in the south west of the city. We merged with the commuter throng heading south over Westminster Bridge and towards the Elephant & Castle and on to Camberwell. Their backpacks and panniers were filled with work things, ours were stuffed with sleeping bags and just enough food for dinner and the next day’s breakfast. Our plan was to ride through south London to the North Downs.

Long summer evenings mean there’s plenty of time to ride for a couple of hours, find a remote, beautiful spot, enjoy a simple camp dinner before settling down to a night under the stars, safe in the knowledge that you’ll be returning to real life the next morning and won’t even have to use up a precious day’s holiday leave. What’s more, there’s no need for all the stressful preparation that precedes a longer trip. If you forget something, it’s no big deal; you’ll be home tomorrow. The worst that can happen is a bad night’s sleep.

Our route south followed London Cycle Route 23 to Crystal Palace – the first hill of the evening – from where we could take in the long view across to the Downs, a line of dark green of hills set beneath the fading blue sky of a perfect summer evening.

A little more than an hour after passing under Big Ben and we were truly away from it all, riding up the steady climb past fields of wheat and oats, ripe and golden, awaiting the combine harvester. This route is a regular recreational route for me but it felt very different riding the familiar lanes under the setting sun, on the lookout for a good place to spend the night.

After exploring narrow lanes and a few muddy bridleways we found our spot, at the top of a large grazed field, on the edge of a dense wood. There were long, uninterrupted views west into the sunset, and east towards sunrise the next morning.

Riding with a single pannier, Ed brought just a sleeping bag and a mat, while Matt and I had also packed waterproof bivvy bags. You don’t need to use a bike with lots of luggage capacity because you don’t need to take that much stuff with you. This about covers it: sleeping bag; sleeping pad; pillow (possibly improvised); tent, tarp or bivvy bag; extra clothes for the evening, including a hat; torch; book to read; toothbrush; knife; food; bowl or plate; spoon or fork; paper towels for cleaning up; and water.

One of the best things about an S24O is that the risk of bad weather is minimal, even in autumn. The 12-hour forecast is usually reliable and if it is looking ominous, I have no hesitation postponing a trip for another day. I have ridden through plenty of rainstorms and have pitched a tent in enough quagmires to know there’s little pleasure to be had camping in bad weather.

We decided to sleep in a small copse of towering beech and ash trees, as these would protect us from the heavy overnight dew, but we would eat dinner out in the open to enjoy the view. I lit a mosquito coil to discourage the gnats and set about preparing dinner. There wasn’t much to be done. Earlier in the day I’d filled a Thermos flask with a hot spicy chilli bean stew. Matt had hot soup in his Thermos and we made a big pot of couscous with water boiled on a lightweight camping stove.

Unless you’re fortunate enough to camp near a crystal clear upland stream, carrying enough water is perhaps the biggest challenge on an S24O. Two to three litres per person allows for drinking plenty while riding, some for cooking in the evening and enough for tea or coffee in the morning. I leave the washing up until I get home, to save water and trouble, putting dirty utensils in a plastic bag. If you find yourself running low on water, most pubs will be happy to refill your bottles. Besides couscous, the just-add-hot-water type of thin noodles and pasta require less water and less cooking time than ordinary pasta, rice or potatoes. Packing a loaf of bread means you can leave the stove behind altogether.

As well as water, I’d brought a bottle of wine, decanted into a Sigg bottle and mounted on my bike’s third bottle cage. A packet of chocolate chip cookies rounded off our dinner and as we ate, we watched the stars twinkling in a surprisingly dark sky.

The orange glow of London was hidden by a dark hill. We heard the hoots and cries of tawny owls in the wood above us."

The orange glow of London was hidden by a dark hill to our north. We heard the hoots and cries of tawny owls in the wood above us, and the bleating of sheep in the valley below. A steady stream of aeroplanes flew high overhead and an occasional car passed far away on the other side of the valley, but there was nothing to suggest we were still well within the ring of the M25. I know of few things more relaxing than sitting at camp, well fed, relaxing and chatting by candlelight, feeling the cool night breeze and watching the night sky. With the cares of the city left far behind, we turned in to bed. My watch said it was approaching half past ten but it felt far later.

Finding a good place for an overnight camping trip is easier with a little preparation, particularly if you’re starting off from a heavily populated urban area. It’s worth looking at the Ordnance Survey’s 1:25,000 maps to get an idea of promising locations. The best spots are out of sight of any dwellings, on open land, preferably with access by a bridleway or footpath. It’s worth taking a little time on day rides to scout out a potential camping spot and making a note of the location for a future trip.

If you have camped on or near to a footpath or bridleway on the outskirts of a town or village, expect to see dog walkers early the next morning. It’s prudent to camp a little way away, out of sight, assuming you prefer not to start the day with a wet kiss from an over-enthusiastic labrador. A tent adds weight and can make you more conspicuous, but it gives a sense of security and more protection from the elements and from flying insects. Sleeping in a hammock or under a tarp is an interesting alternative to a tent or a bivvy bag. It comes down to a matter of taste: some find hammocks uncomfortable and others dislike the confinement of a tent.

If wild camping doesn’t appeal – and I can quite understand why some people may be reluctant to engage in an activity that’s not far from ‘rough sleeping’ – then it’s best to choose a small campsite, preferably one that caters for walkers and cyclists rather than caravans and motorhomes. Some river and canal locks allow camping on their grounds for a small fee, as do many youth hostels.

When sleeping outdoors, I find dawn always comes as something of a surprise, literally casting the landscape in a new light."

When sleeping outdoors, I find dawn always comes as something of a surprise, literally casting the landscape in a new light. We roused ourselves around six and within a few minutes we were packed up and traversing the damp field back to the lane along which we ridden the night before.

We’d decided to ride onwards to the very top of the Downs and take in the view back to London, stopping in a churchyard for an early breakfast of baked beans, a baguette, tea and some bananas.

The return journey took us down more lanes and bridleways eventually retracing our journey back into central London. Refreshed and energised, I had the feeling I had made a head start on the new day and was comforted to know that a simple night under the stars brings as much joy now as it did all those years ago camped out in the back garden.

This was first published in the October / November 2012 edition of CTC's Cycle magazine.

The legal status of wild camping varies from place to place. Scotland takes a more permissive approach, yet wild camping is still permitted in Open Access areas of all National Parks across the UK. Most bylaws against camping on land owned by public bodies like the Forestry Commission and the National Trust exist to prevent long term squatting, damage to the land or for reasons of legal liability. A pragmatic view is that as long as you’re unseen and leave no evidence of ever having been there, a landowner is unlikely ever to know, or to care.

Clear skies and a couple of companions.

Go lighter still and take a mountain bike to find an even more remote camping spot.

Dixe Wills’s book Tiny Campsites has details of 75 campsites that are an acre or less in size and cater for a small number of campers: www.tinycampsites.co.uk

Ronald Turnbull’s The Book of the Bivvy is a wry, instructive account of lightweight camping: www.ronaldturnbull.co.uk/books/bivvy/bivvy.html.

OS Explorer maps can be borrowed at most public libraries and are available online at www.bing.com/maps 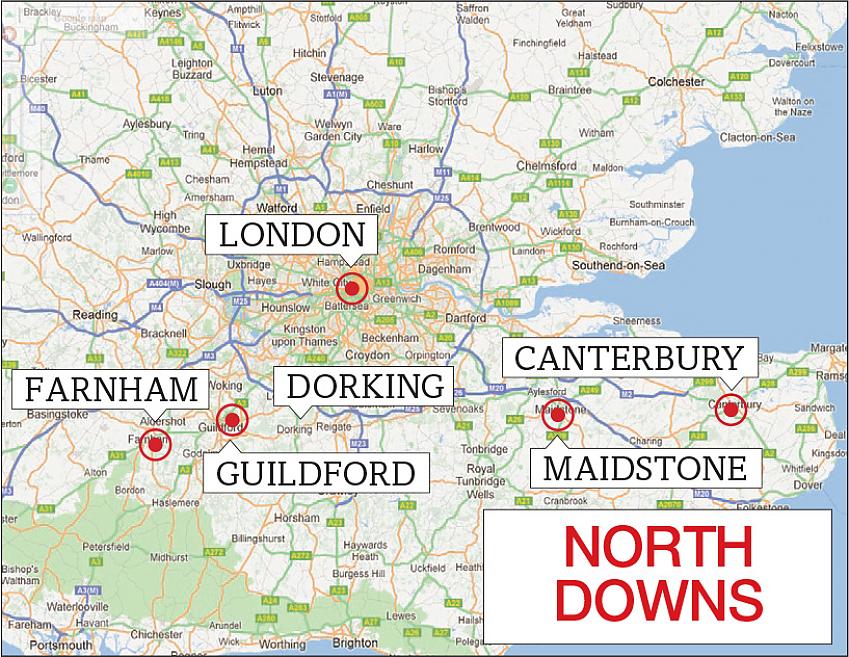