The 100-mile South Downs Way is an ideal mini-adventure with mountain bikes and backpacks, as Tony Upfold discovered.

With its stunning scenery, sweeping views and breathtaking sense of space and freedom, the South Downs Way offers a deceptively vast rural wilderness in an overcrowded corner of England. Modern civilisation seems a world away as you traverse this ancient, chalky landscape – but real life is rarely more than a mile or two distant. No arguments about it, the South Downs Way has all the inspirational ingredients for a magical walk. Which is a bit embarrassing when you’re supposed to be cycling it and have to push your bike up the very first hill…

Tackling the 100-mile trail from east to west involves a grassy, gruelling 1-in-4 ascent out of Eastbourne at the very start, which proved too much for four members of our six-man party. Panted cries of "Where are my crampons?" and "Shouldn’t we be roped up?" jokingly hid the concern that perhaps this was going to be tougher than a few people had thought. And there were plenty more hills where that one came from.

Five of the group – Ray Partridge, Matt Wooldridge, Jonathan Howkins, Dean Adams and myself – rode from John O’Groats to Land’s End two years ago and had chosen the South Downs Way as our cycling challenge for 2016. Making up the six was Colin MacQuillin, a regular off-road rider whose climbing abilities quickly earned the nickname ‘Mountain Goat’.

For every lung-busting ascent there was an adrenalin-pumping swoop downhill.

Ahead of us lay three days of seriously undulating pedalling from the white cliffs of the Sussex coast to Winchester, the ancient capital of England, with 3,810 metres (12,400ft) of climbing along tracks of chalk, flint, grass, gravel and occasionally concrete and tarmac.

For every lung-busting ascent there was an adrenalin-pumping swoop downhill, and there was compensation for those aching muscles as we travelled through a beautiful landscape of rolling chalk downs, dry valleys, meandering rivers, steep scarp slopes, picture-postcard villages, ancient woodland, flint-built thatched cottages, classic country pubs, vast fields… and endless sheep. 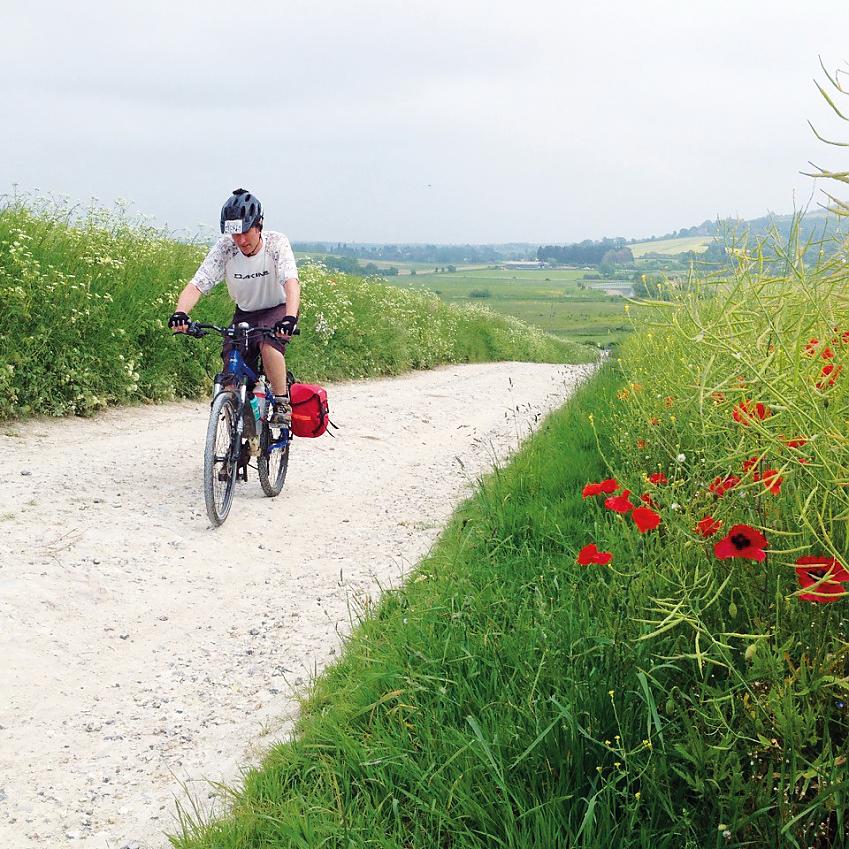 The South Downs Way is steeped in history. Littered with tumuli and hill forts from the Iron and Bronze Ages, this ancient track has been called a ‘Neolithic motorway’ – appropriate as Dean’s suspension-free 1992 Marin Muirwood had technology appearing to date from that era.

This superbly-signed National Trail is one of the country’s most popular off-road endurance routes, having become the first long-distance bridleway to be designated in Britain in 1972. We broke the journey down into three daily segments of 39, 36 and 25 miles, and swiftly felt old and inadequate on learning that Josh Ibbett, of the TORQ Performance MTB Team, cycled the 200 miles from Winchester to Eastbourne and back in 17hr 47min 30sec last September. Our first mile suggested we were more likely to set a record for the slowest one-way trip in history.

Once up on the top after that tough opening climb out of Eastbourne, we were hit by a chilly north-easterly wind more suited to November than June. Most importantly, though, it was dry, ensuring decent traction on the potentially slippery grass and chalk surface. Our first day’s destination was Upper Beeding and it didn’t take long to get into the pattern of climb-descend-climb, with magnificent views across the Sussex Weald and to the English Channel on the left.

Wheeling in the sky

The first of those descents brought us to the quiet village of Jevington, somewhat incongruously the birthplace of Banoffee Pie 44 years ago, according to a blue plaque on the wall of a 17th-century building which once housed the Hungry Monk Restaurant. After Jevington and a climb through ancient hazel woodland, came Alfriston, another lovely old village on the River Cuckmere and the perfect stop for coffee and cake at the Singing Kettle.

The next five miles of the South Downs Way make up the most open section of the trail and you won’t see a tree between Alfriston and the River Ouse. What you will see on a day like we had are dozens of paragliders taking advantage of the thermals created by the north wind on the scarp slope of Firle Beacon.

We were almost flying ourselves on the long run down through open pastures from Beddingham Hill to the Ouse, until Ray realised the rear wheel of his old Specialized Hardrock wasn’t as round as it used to be. The one dodgy spoke he thought had been fixed before the ride had now become two and, despite the best efforts of several feet of masking tape, major surgery was required.

While the rest of us grabbed a coffee and sandwiches in the bright, friendly and spotlessly clean café at YHA South Downs at Southease, which opened just three years ago, Ray and Matt pedalled off to Lewes to find a bike shop to fix the Hardrock. Having crossed the Greenwich Meridian, and scrambled up an incline that defeated even the Mountain Goat, we met up with Ray and Matt again in a lay-by beside the A27. As a hawk circled 50 feet above a cornfield to our left, another flock of paragliders resembled giant birds of prey to our right on the approach to Ditchling Beacon.

As a hawk circled 50 feet above a cornfield to our left, another flock of paragliders resembled giant birds of prey to our right on the approach to Ditchling Beacon.

There are numerous marked tap stops usefully positioned along the route but we were all running low on water as we dropped downhill to cross the A23 before the final assault of the day up Devil’s Dyke. The fact we had managed to miss seeing the famous Jack and Jill windmills at Clayton on our descent indicated we needed a quick break to recharge the batteries, so we stopped at Pyecombe Golf Club and a friendly member arranged for us to be served outside. (Apparently baggy Lycra-lined shorts spattered in sheep droppings contravened the clubhouse dress code.) This gentleman seemed quite miffed when we pointed out we were after Adam’s Ale rather than the real thing.

Thirty minutes and another tough climb later, we were again spurning the chance of a beer – an event rarer than hen’s teeth. Well behind schedule, we ignored The Devil’s Dyke pub with its amazing views and let sense and supper prevail, gratefully gliding downhill to find our Upper Beeding B&B.

Mist on the Downs

Day two was warmer, but at 8.30am the damp hilltops were still swathed in low cloud and mist – which made for an eerie approach to the legendary Chanctonbury Ring, an Iron Age hill fort inside which are the remains of a Roman temple.

The trail becomes more open through mixed farmland in this section – but a stray flint is never far away and it wasn’t long before we suffered our only puncture of the ride. Ray’s rear wheel was the culprit again.

Coffee, accompanied in my case by a humongous slice of Victoria sponge, was taken at the halfway point of the trail as the sun shone outside the Amberley Village Tea Room. The sudden warmth and brightness seemed to bring the South Downs to life. In these conditions, June must be the perfect month to ride the trail, with poppies, buttercups, Oxeye daisies and orchids splashing the canvas with colour, corn bunting chirruping in the fields and the rich smell of wild garlic filling the air. 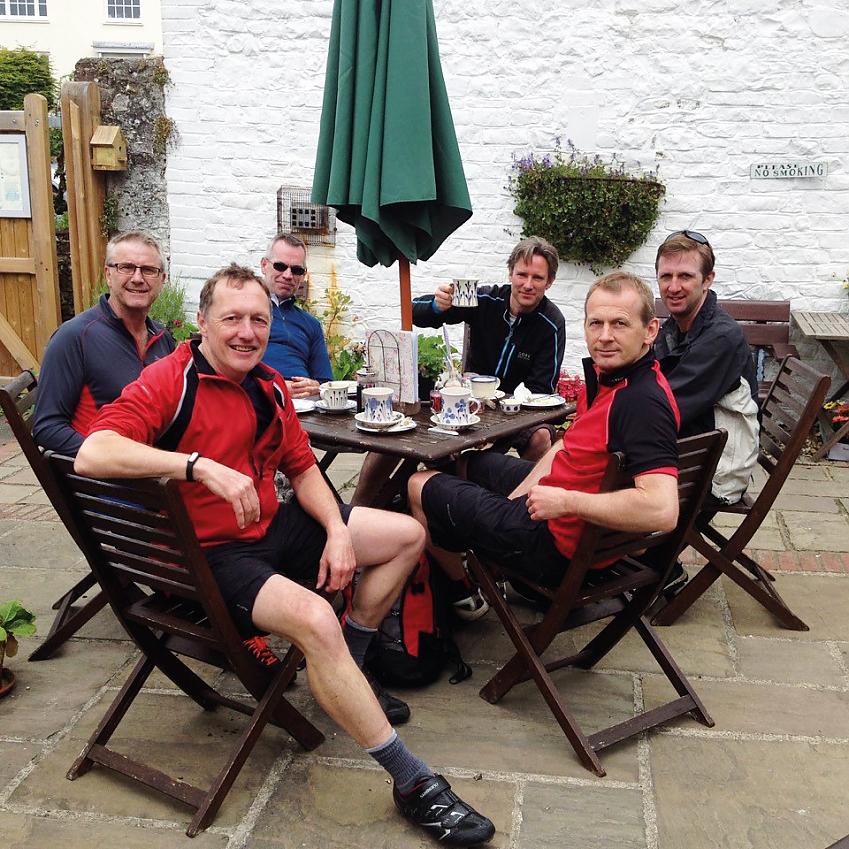 It was still hard work physically, but mentally the worries of the world drifted away as we cycled past Long Bottom, Loose Bottom and Big Bottom, crossed the Roman Stane Street, enjoyed the most wooded section of the trail through Charlton Forest, and ticked off the hills – Rackham, Bignor, Treyford and Harting Down among them.

There was even time for a little traffic congestion on our Neolithic motorway as we waited for a large herd of cows to amble their way from one pasture to another, which caused a lengthy hold-up and some consternation for the runners involved in a cross-country relay race along the trail.

After spending the night in Petersfield, day three started with a long haul back into the Downs from Buriton and a long ride – sorry, walk – up Butser Hill to the highest point of the South Downs at 270m (886ft). The reward was a panorama that took in the Isle of Wight in one direction and the North Downs in the other.

From Butser the countryside rolls more gently and the trail, narrow in places and less used here, zig-zags through farmland, with a slightly tricky piece of navigation at the start of the climb to Old Winchester Hill.

For lunch there could be few better stops than The Shoe Inn at Exton, with good beer, fabulous food and the River Meon bubbling past at the bottom of the pub garden.

From there it was a long climb to the ancient beeches on 201m Beacon Hill, much of it on a quiet lane, followed by the last summit at Cheesefoot Head, before a fantastic final downhill run towards Winchester – although the narrow path beside the A31 was unpleasantly overgrown a mile from the finish.

Well-deserved pints of foaming ale in hands, we agreed perhaps the trail should be renamed the South Ups Way. But put it on your cycling wishlist – it’s well worth the effort!

Route: The South Downs Way is well signposted and easy to follow. Riding west, watch out for the steep, narrow and stony descent from Old Winchester Hill, which can be busy at weekends.

Conditions: Dry with cold northerly wind at first then warming up with sunshine. The trail is mainly chalk and flint, with grass sections and some gravel/concrete/tarmac. Not too slippery in the dry, but beware sharp flint edges.

I’m glad I had: The above map, a long-sleeved top to make up three layers on day one, sun cream, and a good granny gear!

Next time I would: Get in more off-road training and hill climbing before the ride.

Eastbourne and Winchester at either end of the route are easily accessible by train and road. There are numerous towns and villages with pub and B&B accommodation a mile or two off the trail, as well as campsites.

We cycled from home in Farnham, Surrey, to North Camp and travelled by train to Brighton (via Gatwick). We then cycled 23 miles from Brighton to Eastbourne via Beachy Head to reach our starting point.

The 100-mile trail is steeply undulating and tough for the occasional off-road rider like me, with 3,810 metres of climbing. A mountain bike is a must, with at least front suspension and preferably rear as well.