Cycling among a Norwegian wood
By cliveandrews
Friday, 24 March 2017

Each August in Norway, 20,000 mountain bikers ride up to 122km with a figurative royal baby on their backs. Journalist Pat Kinsella joins them and enjoys it so much, he does it twice!

The theme from Disney’s Frozen is stuck on a loop in my head. When a song worms its way in during a long ride, it’s impossible to shake. Once I would have had something edgier rattling around my brain. I blame my daughters. Them and the movie-perfect Scandinavian wilderness I’m pedalling through.

I’m in the midst of an extraordinary cycling event. The Birkebeinerrittet is the biggest mountain bike race on the planet. Until a few weeks ago I’d never heard of it, but now I’m here, wending through Norwegian woods, across plateaus and around mountain peaks.

In the distance, the Jotunheimen range reaches into the sky. According to local folklore, these mountains are home to trolls. Not the cute roly-poly ones in the film that has my girls spellbound, the tear-you-limb-from-limb kind that populated Norwegian mythology long before Disney sprinkled them with sugar.

Both my body and my bike are beginning to resemble something a troll has been chewing on. I promise us both a day of total rest and relaxation tomorrow. After 122 kilometres, we’ll have earned it.

The Birkebeinerrittet is less a bike race and more a two-wheeled tradition. Over 20,000 people come to ride the course every year, but few cyclists outside of Scandinavia are aware of it. And it’s not just the size of the field that makes ‘the Birken’ unique. 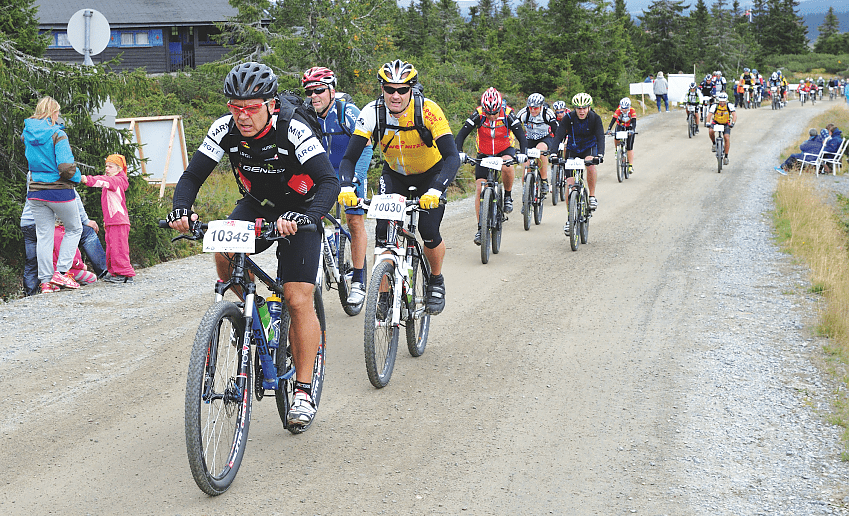 Like its winter equivalent, the Birkebeinerrennet ski race, the event commemorates a moment in Norwegian history when a royal infant – Prince Haakon – was smuggled through the mountains by two skiers who were protecting him from assassins. That was in 1206. Today, all competitors, even the elites, must carry an extra 3.5kg of bulk (over and above any food or drink they might consume) to symbolically represent the weight of the royal baby.

Rows of weighing scales surround the starting line, with riders nervously queuing to make sure they’re carrying enough. Some stuff stones into their backpacks to make up the difference. I’m warned there’ll be spot checks at the end, to ensure people are still lugging their fair share of baby bulk.

The Saturday race is the big one: 17,000 riders take on a 92km course that rolls along dirt roads and double-tracks from Rena to Lillehammer. The field is so huge that riders begin in waves, each containing 250 bikes, with five minutes space between each one. The first starts at 6am and the last leaves around 2pm. Unusually, the slowest riders are released first and the elites last, so there’s lots of exciting overtaking. Spectators line the course, full of cheers and beers, creating an entertaining festival buzz.

But that’s tomorrow. Today, together with 600 other idiots, I’m doing the UltraBirken, a 122-kilometre version of the event. We begin with the first wave of another 4,000 riders – overspill from the Saturday race, who do the 92km course a day early. But after 50km, the Ultra veers away from the main track to take a tougher and more technical route through the mountains.

Now the field has stretched, the only sign of humanity is the scribbled line of singletrack I’ve been following for hours. The trail is a faint scar on an otherwise virgin landscape, and it’s not just rough riders who howl through this ultra-wild terrain. Packs of wolves tear through these trees too, taking down a moose a day according to one farmer I spoke to. Bears are known to roam here. This is not a face of Europe I’m familiar with. It’s one I barely knew existed. 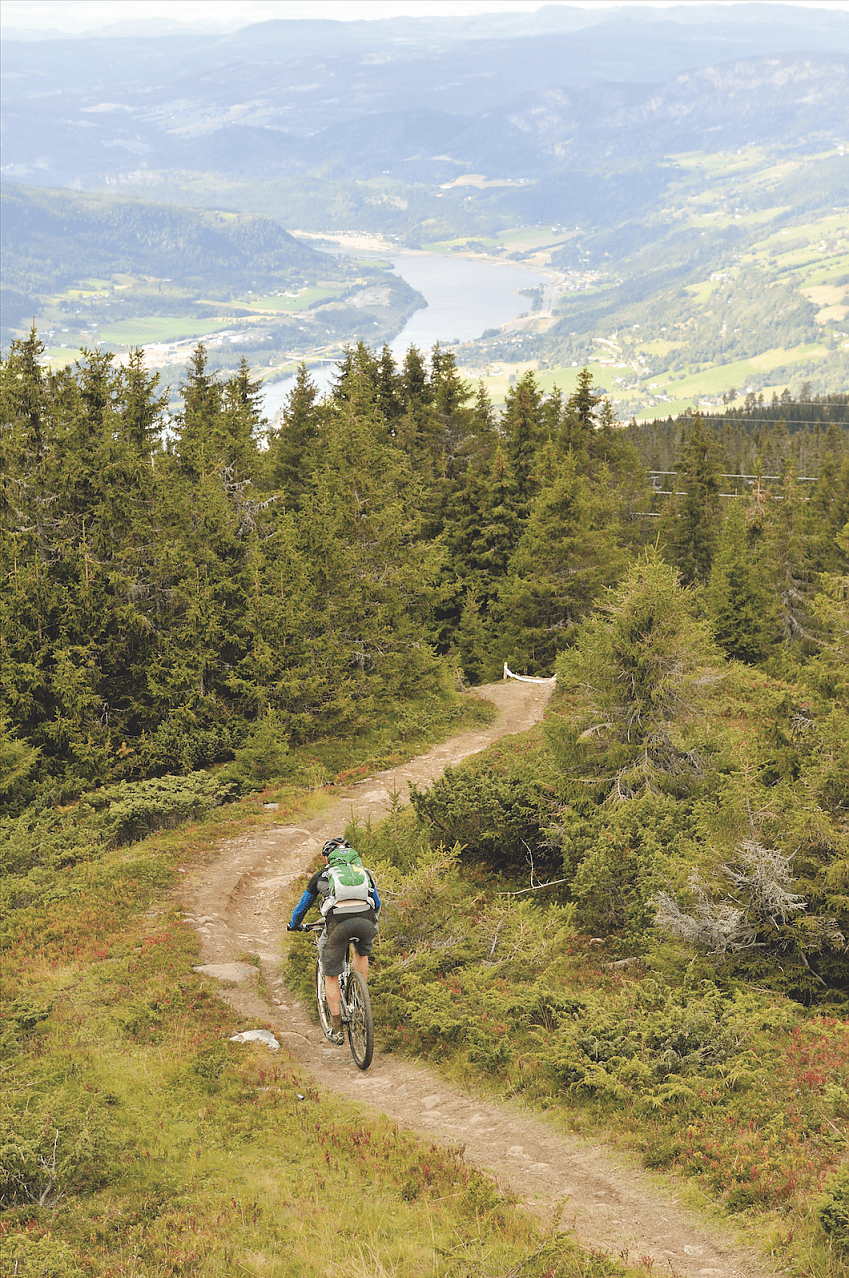 In Norway, back-country trails like this – enjoyed by cross-country skiers during winter and used by hikers and bikers once the snow retreats – are called trolløype, literally meaning troll tracks. They take their mythical monsters very seriously here. Almost as seriously as they take their mountain bike racing.

I’ve never seen so many mountain bikes in one place and everyone’s kit is top notch. Many riders are chasing a much-coveted 'merket' – medals awarded to those who finish within a certain time, similar to sportives. The time required is calculated by averaging the times of the first five riders across the line in each class, and then adding 25%. Those that nail it often mention merket results on their CVs.

The only silverware I’m eyeballing is a finishers’ pin. And, after 120-odd kilometres of incredibly varied riding – including a whooping berm-drenched descent of the Hafjell World Cup downhill course – Lillehammer looms into sight. One last super-steep gravelly drop delivers me into the arms of the Winter Olympic stadium, where a beaming Birken volunteer presents me with my hard-earned pin. "Well done," she enthuses. "Now you can have a beer!"

But adrenaline is racing dangerously through my veins, and I still can’t let it go. I bump into one of the race organisers, and blurt out a request to enter tomorrow’s event too. "I can arrange that," he grins, looking me up and down as I stand there, muddied and bloodied. "If you’re really sure you want to cycle another 92 kilometres tomorrow…" I’m sure. Beer, rest and relaxation can wait.

All but a few kilometres are on fast double-track and gravel roads, which means the field will attack it like a bunch of rampaging Vikings right from the start.

Grappling for the alarm at 5am the next morning, I roll out of bed and stumble to my feet, trying to ignore aching legs. My still-mud-splattered steed lies dishevelled in the corner of the room.

My bike is actually in for a much easier ride this time around. All but a few kilometres are on fast double-track and gravel roads, which means the field will attack it like a bunch of rampaging Vikings right from the start – bad news for my weary pins.

I jump on one of the buses that convey thousands of riders to Rena and join the long queue to check my backpack on the scales. The rudimentary weighing devices don’t reveal how much your pack weighs; they just confirm that it’s over 3.5kg. Full of camera gear, mine emphatically drops the arm of the scales.

I’m released in a wave at 8am. My muscles aren’t amused but they warm up during the stiff climb out of Rena, and I manage to work my way through the slower riders to a group going at a speed I’m happy with. Then it’s just a matter of turning the cranks and hanging on.

The sun’s out and the tracks are lined with partying people. The atmosphere is intoxicating. I have no idea what everyone is shouting and screaming at me, but they look happy and I feel like I’m riding a knobbly-tyred Tour de France.

The one piece of technical track we encounter causes hold-ups and falls. In a field this enormous, there are inevitably some inexperienced mountain bikers around me. But with a mixture of luck and judgement I manage to avoid getting tangled in the mess, and jump on the back of another group steaming towards Lillehammer. The approach to that final sketchy descent into the stadium is familiar now, and the bike seems to feel the magnetic pull of the finish.

Weirdly, the volunteer that presents me with my second Birkebeinerrittet finisher’s pin in as many days is the same woman as yesterday. Even more improbably, she remembers me. "You again!" she laughs. "Now you’ve really earned that beer."

No argument from me on that point – time to finally let it go and head to the bar. But first an official grabs my bag and weighs it. Turns out I’ve been lugging 7kg of baby weight. Twins! 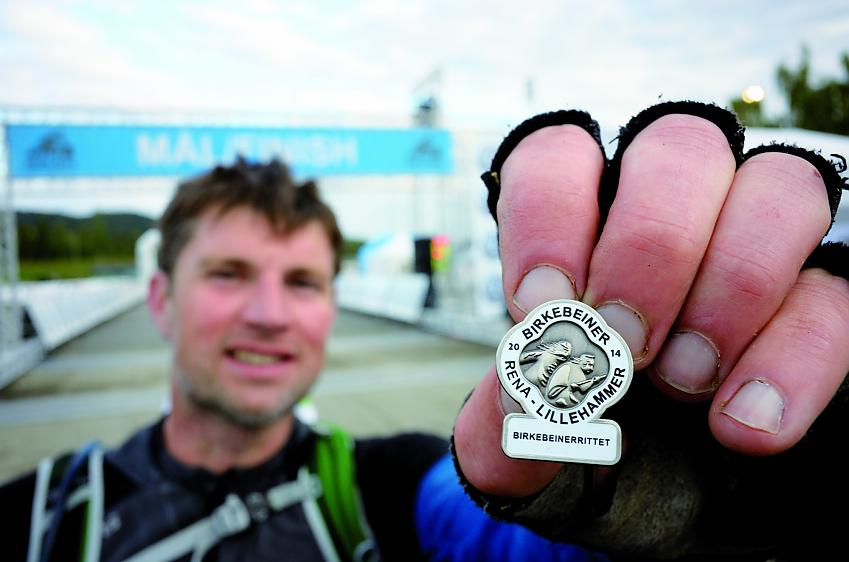 Start/Finish: From Rena to Lillehammer

Distance: 92 kilometres for the main event. The Ultra version is 122 kilometres.

Route: From Rena to Lillehammer, across the Sjusjøen mountain plateau in central Norway.

Navigation: The route is well signed.

I’m glad I had: Some extra layers – the hills are exposed and the Norwegian wind really bites.

Next time I would: Not carry twice as much weight as the rules required me to.

The 92-kilometre event is achievable by anyone with reasonable fitness, on a hardtail or full-suspension bike. The Ultra is a much sterner test, where you’ll struggle without full suspension. Enter early – the race sells out and accommodation in Lillehammer fills quickly. Norwegian Air (norwegian.com) offers cheap flights from various cities to Oslo’s Gardermoen Airport. Let airlines know you’re travelling with a bike and pre-arrange additional luggage allowance. From Gardermoen, trains regularly service Lillehammer, a journey of just under two hours. Bus services link Lillehammer and Rena, with extra buses put on to transport bikes and riders for the race.

Great Rides: Lofoten Islands in Norway View
Cycling UK continues to support the UK to cycle
This remains true during this difficult period with the ongoing threat of coronavirus Covid-19
Read our latest advice on cycling
Join Cycling UK to help us change lives and communities through cycling
Membership gives you peace of mind insurance, discounts in cycle shops, rides & routes
Join now