A guide to car-mounted cycle carriers (bike racks on cars)

Find the bike rack to suit you and your car. (Photo by Thule.com)
By mattlamy
Thursday, 21 July 2016

A guide to car-mounted cycle carriers (bike racks on cars)

Hurrah — the school holidays are finally here! Hopefully one activity you’re planning to do with your family this summer is to go on a cycling adventure. In fact, even if you haven’t got children, you might want to take your bike (or bikes) away somewhere a little different while the sun shines. So what is the best way to transport your bike with your car?

There are essentially three types of cycle carrier available: rear mounted, either attaching to the boot or hatchback; roof-mounted, attaching to roof bars; or tow point-mounted, attaching to either a tow bar or tow ball. With the right provisions, any car can use any type of carrier, but do bear in mind the extra cost of fitting those provisions in the first place. Roof bars are a reasonable extra investment but buying and fitting a tow bar or tow ball with accompanying electrical power supply will cost significantly more. 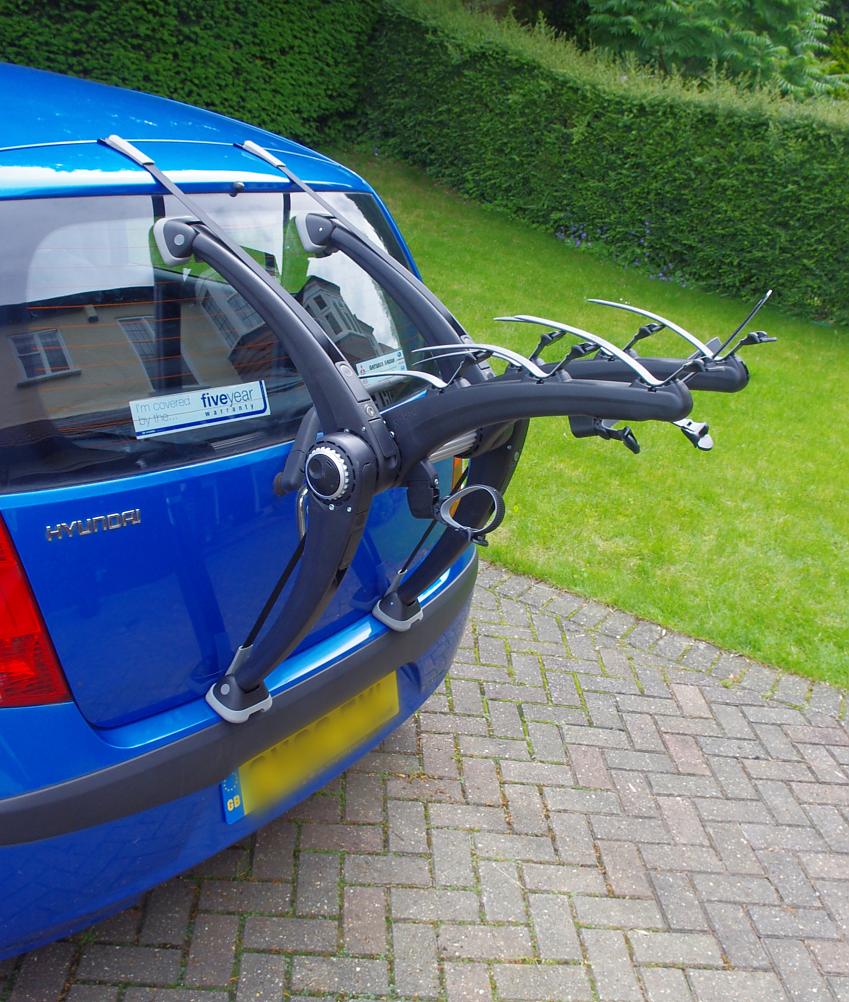 The rear-mounted bike rack is most people’s first experience of transporting multiple bicycles with their car, and as a cost-effective option it is hard to beat. The rear-mounted rack tends to follow a relatively basic design — a metal frame which sits against the back of the car, with four or six straps hooking it to the edges of the car boot or hatchback, and two arms on which the bikes hang.

Despite rear-mounted carriers’ apparent simplicity, there are some things to be wary of. Not all racks are designed for all cars. Check with the manufacturer’s guidelines to see if the one you’re intending to buy is compatible with your specific vehicle model and production year. Then take time and care to practise fitting it. Tighten all straps as much as possible during initial fitting and then check them again after all the bikes are in place. Use padding between bikes to prevent damage, and then bungee all the bikes together. Check the straps again if you’re concerned the carrier is wobbling excessively while driving, but don’t become paranoid about it — they will wobble a bit! Finally, make sure nothing is obscuring the car lights or number plate. 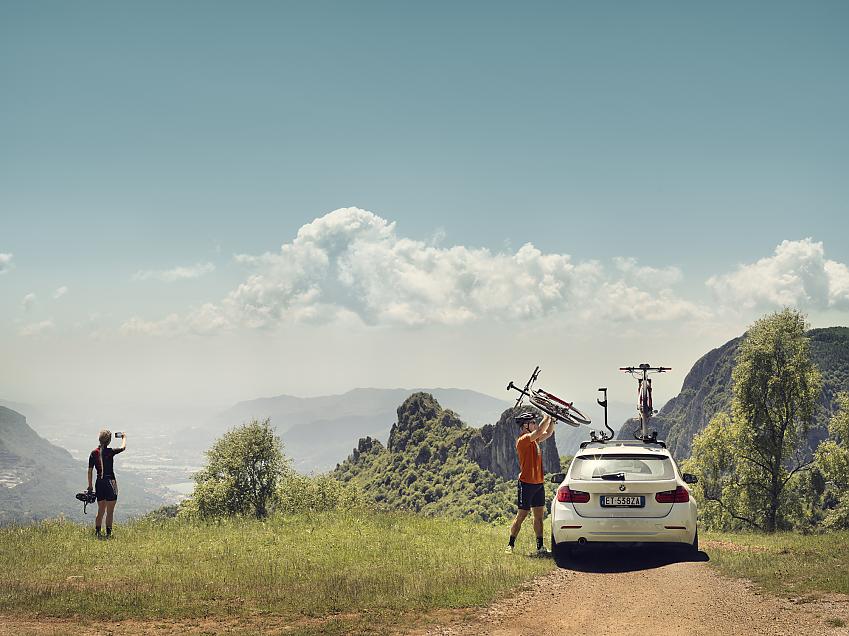 Roof-mounted cycle carriers (see main image) simply clamp on to bars that can be fitted to run laterally across a car’s roof. There are a number of different ways that roof-mounted cycle carriers may hold a bike in place, but the two most common options use either a pivoting arm that clamps around the bike’s down tube, or a front bar onto which you can attach the fork dropouts once you’ve removed the front wheel. Although this second option may appeal to road race fans because it looks like the systems used by teams at the Tour de France, we’d suggest most leisure and family cyclists don’t need the extra hassle of wondering where to store a load of front wheels. Even the least expensive down tube-clamping roof-mounted rack is secure enough to hold a bike securely.

One of the benefits of using roof-mounted carriers is that you can buy and fit as many as you need, up to a maximum of about four depending on car size. Remember, you will have to top and tail the bikes — alternating the way each is pointing — to use roof space efficiently and squeeze the most on. Also, you’ll have to be relatively strong and tall to use all roof space. When driving, don’t forget the bikes are up there — a trip to a multi-storey car park will be an expensive mistake. Once the bikes are all securely in place, though, you can enjoy the journey without any of the nervous rearview-mirror glances that come with rear-mounted cycle carriers. 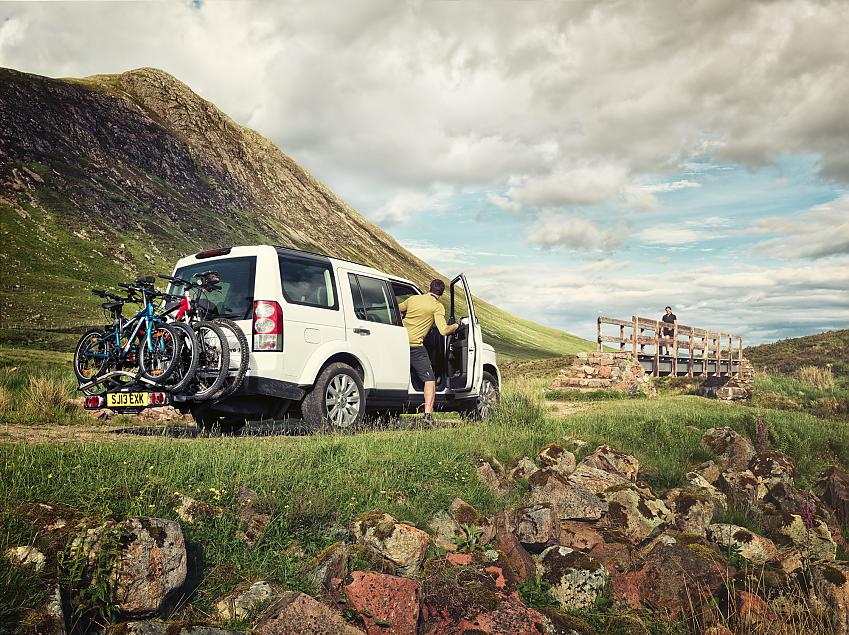 Tow bar or mounted-mounted cycle carriers are quite incredible bits of kit that clamp securely to the car, providing very stable and easy access to your bikes. In some instances, modern tow point-mounted racks have overcome many of their past negatives. For example, although they can be relatively heavy and cumbersome when not in use, some modern tow point-mounted carriers fold for slightly easier storage or have adopted strong yet minimalist designs. Similarly, it was traditionally impossible to access the boot once the bikes were installed on a tow point-mounted rack, but many modern carriers now tilt as one — even with bikes fitted — so you can get to the boot.

By far the biggest downside is that you need a tow bar or tow ball. These aren’t cheap to have fitted, but if your car already has one and an accompanying electrical point for a number plate lighting board — some tow point-mounted racks even come with an integrated lighting board — then they are a superb option and offer possibly the most secure way to transport a family of bikes.

If you’ve got a big enough car and few enough people to carry, you could transport your bikes inside the vehicle. To make the most of the available room, remove the front wheels of all bikes. If you’re going to lie them down, have the side with the chainset uppermost (so the rear derailleur isn’t bent by having the weight of the bike resting on it). If you’re carrying more than one bike, rest them on top of each other with a sheet or couple of towels between, so that you don’t damage each bike’s paintwork. 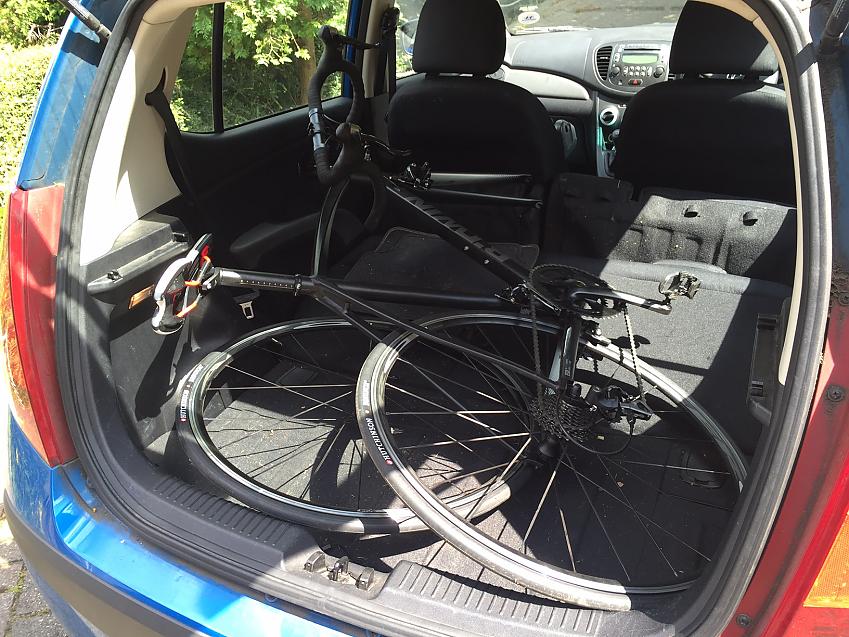 The easiest way to carry both kids bikes and two adult bikes would probably be to put the smaller children's bikes in the boot (if you have a reasonably large car) and the two adult bikes on the roof. If that's not possible, still have the two adult bikes on the roof but use a rear carrier for the kids bikes. Kids bikes will fit on rear-mounted racks. You can get four-bike rear carriers, but I'm not sure I'd trust them to hold the whole family's bikes - that's a lot of bikes. Depending on the design, you might have a bit of trouble getting small kids bikes fitting in roof-mounted racks.

For most first-time users of a car-mounted cycle carrier we suspect a rear-mounted option will be the obvious choice. If you’re only intending rare trips with your bikes, it’s the most cost effective option and, if fitted properly, is perfectly useable. However, for people who have to regularly transport bikes on their car, we’d recommend the extra security, stability and convenience that come with roof or tow point-mounted carriers. If you’re not tall or strong enough to use roof-mounted carriers, go with a tow point-mounted option; if you don’t already have a tow bar or tow ball and can’t justify the expense of fitting one, go with roof-mounted racks.

How do you transport your bike by car? If you have any top tips share them in the comments section below.

Pipe lagging: before you go on your travels, pop to your local DIY store and buy some wide foam pipe insulation. Put this around your bikes wherever they clamp or sit on a rack, or wherever they may rub against another bike. Then you can be sure they’ll look just as good when you remove them at your destination as when you left home.

A guide to bicycle storage and security at home View