Phone, camera, action: a guide to photographing your cycling adventures

Phone, camera, action: a guide to photographing your cycling adventures

The best camera is the one you don’t forget to bring – such as the phone in your pocket. Cycling journalist and photographer Steve Thomas explains how to use it better

As much as some photographers may scoff at the concept of mobile phone photography, if you know what you’re doing and take your time then you can create excellent images with any recent model of smartphone. Even five-year-old devices are more than capable of producing great pictures, and of a resolution that is often more than enough for professional use and print reproduction.

As for Instagram and social media use, and even for many websites, the image will often be displayed little bigger than a matchbox. Few will notice the lack of the fine-art level of detail afforded by a bigger camera.

Phones lack the big sensors of dedicated cameras, with their wide dynamic ranges, their aperture choices, and multiple focal length options. But for ease of use and versatility they simply cannot be beaten as image capturing devices, especially when you’re out for a ride.

The first step in taking better phone pictures is to use your mobile like you would a camera. Slow down and get your breath. Clean the lens. Hold the phone steady with both hands.

Compose the image and then grab your focus by touching the screen. Choose the exposure to retain the highlight detail. This is usually achieved by touching on a grey or mid-tone area of the screen, often the sky, until the exposure is more or less even, then holding to lock it.

On most phones sliding your finger left or right across the screen also alters the exposure. (Manual control apps are also available.) High dynamic range (HDR) mode on newer phones is good at handling these contrasting light situations. If possible, try to avoid extreme lighting – such as big white skies along with darkly shaded areas.

Lighting is very important. Try to keep the sun behind you or, better still, threequarters head on to the subject. Early morning and evening light is the best for any photography, so use it if you can. Newer phones are much better at dealing with low light situations than older models, but they still lag behind a bigger-sensor camera. Shooting in the dark or indoors will not produce good results on a phone; even bigger cameras struggle here.

Look for opportunities to frame your shot

The flash on phones is best only used to fill in shadows in very bright sunlight, such as close-ups of riders’ faces under peaked helmets, not to light a full scene. So it’s best turned off 99% of the time. Avoid using the digital zoom option too. Apart from on a few higher-end new phones, it simply crops into the scene and reduces the image resolution.

Many phones now come with multiple cameras and focal lengths. If you want to take the best pictures with your phone, these are worth their extra cost. Their wide-angle cameras are great for big landscapes with a rider in it, and also for shooting point-of-view photos from the saddle.

When capturing an image, don’t just take one shot. Try a few compositions and different exposures, as you would (or should) with a regular camera. If it’s an action shot, hold down the shutter button to use burst mode, then choose the best image later. 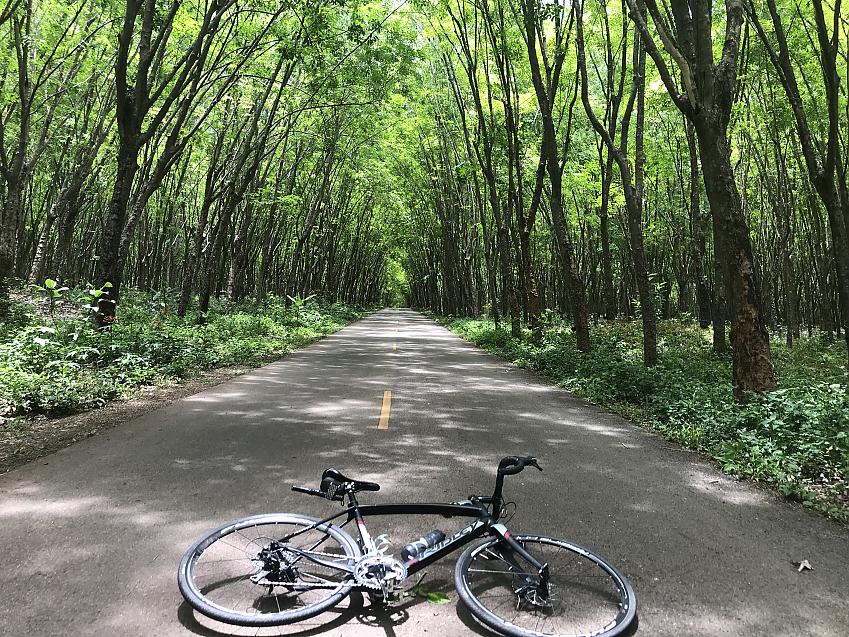 You’ll need a tripod to get yourself in shot too

Composition should be approached in the same way as with any camera. Keep in mind that you will not have aperture control for depth of field to blur backgrounds. However, if your subject is very close to the camera and the background is way off, you will still achieve some depth of field. You can add in lens blur later using a post-processing app such as Snapseed.

Good composition is what separates a great image from a casual snap. Think about the scene and take time to frame it. The old photographic ‘rule of thirds’ can be helpful. For a cycling image, that generally means not having the rider dead centre. Instead, try to divide your screen so that the rider is in one third of it, and try to keep the sky and ground in roughly equal proportions.

It’s always good to try to show the cyclist riding into or out of a scene with ‘leading lines’ rather than directly head on or from behind. If you can show a trail or road leading into a scene and the rider coming in or out of that, that’s ideal. It draws you into the image and gives you a sense of being there.

Phones can struggle in dim light, but try to avoid using the flash

It’s also worth turning your phone upright for some shots. Vertical images have a different feel. It’s known as portrait format for good reason: it works well when you want a closer image of a rider. Portrait format images are also more popular on Instagram Stories.

You can shoot great close-up images with a phone. Always use burst mode, and remember that you don’t always need to see all of the rider – perhaps just part of the bike riding in or out of a scene, such as a water splash or through colourful undergrowth. Try the flash for these pictures, as it will freeze the water droplets or draw attention to the subject. 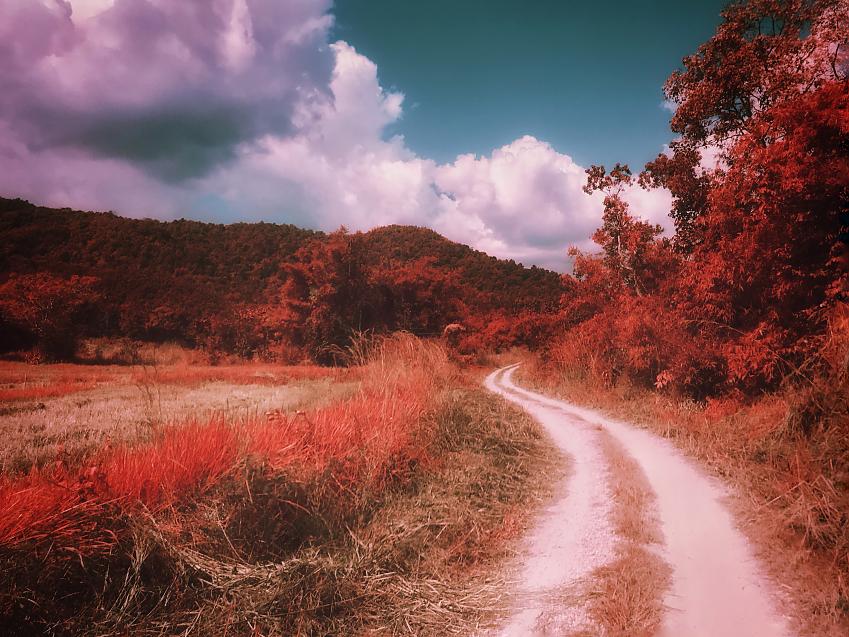 Mobile phones usually have superb autofocus and tracking, which makes them good for action images. Even so, try to touch and lock pre-focus before shooting and, if they’re moving across your scene rather than towards or away from you, pan with the subject. When panning, keep the movement smooth. Before you shoot like this, check what is either side of your frame to avoid obstructions.

Go out and experiment. The more images you shoot, the better you’ll become. Take a look at photos online that inspire you and try to recapture them. You will be amazed what’s possible with the right skills and a little extra input.

Send us your photos

When you’re sending one or two photos to go with a Travellers’ Tales submission or a letter to Cycle, an email attachment is fine. Be careful that your email program doesn’t automatically downsize the image. Read the submission guidelines.

To submit photos for Cycling UK’s photo library (for free use across the organisation), contact us.

Magazine     How to guides

Dedicated camera apps give you more manual control over your photography so you can nail exposures more accurately. My favourite is Filmic Firstlight, available for iOS and Android, priced £6.99.

You can manipulate the image for artistic reasons, or to make it feel more like what you saw – Photoshopping it, essentially. Snapseed is a great, easy-to-use app. It’s free for iOS and Android.

To get yourself in a photo, you’ll need a mini tripod with a clamp, e.g. a http://joby.comGorillapod. Bluetooth triggers cost from around £2 up. Shoot in burst mode with the higher-resolution rear camera.

Edit, cull, and back up

Don’t let your images clog up your phone’s memory. Be ruthless. Only keep your best images, then back them up. Sifting your photos will help you become more selective and will show you what works best.

Practice makes the biggest difference. Learn the technical functions of your phone and the apps. Experiment with composition and lighting until you find what works for you.