"So that’s 730 metres of climbing we’ve done today,” I said. “But this is Lincolnshire!” replied my mate, Mark. Like most people, both of us had expected Lincolnshire to be mirror flat. And like most people, we were wrong. Our first day had taken in 88km of empty roads and, according to my Garmin, a not unreasonable amount of ascent, which in places – such as Red Hill near Goulceby – was as steep as 11%.

Red Hill is in the Lincolnshire Wolds, and there’s a clue in that little word ‘Wolds’ as to what you’ll find. ‘Wold’ is an old English word used to describe high forest land (the forest is long gone hereabouts). Calling the Wolds ‘high’ is perhaps pushing it – we never got above about 150 metres – but we nevertheless enjoyed tremendous views, including panoramas of the flatlands to the east for which the area is better known, and which we would also be exploring. 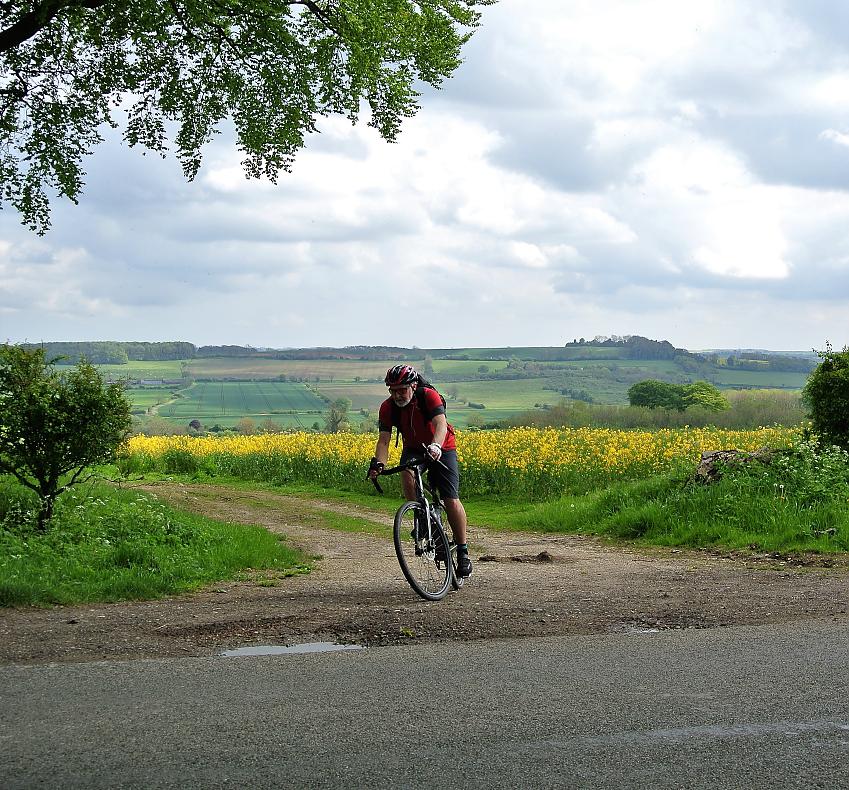 A gravel bike or tourer is fine for the area’s bridleways. Photo: Alf Anderson

Out first day saw us setting off from the expansive grounds of our accommodation at Brackenborough Hall Coach House, from where a short 4km spin took us into Louth and the first coffee of the day.

I know: 4km is a pathetic distance to ride before your first coffee, but we wanted to see a little of ‘Britain’s favourite market town’ (according to BBC’s Countryfile) before we hit the road properly. We couldn’t resist a coffee at the same time.

Louth is home to the impressive St James’ Church, which has the tallest mediaeval parish church spire in England, an array of lovely red brick architecture from the 17th and 18th  centuries, a plethora of busy, independent shops, and three busy market days a week.

From Louth we rode south towards South Thoresby: flatlands to the east and the low humps of the Wolds to the west. The map indicated that we were riding through gently undulating countryside, but other than the occasional short, steep incline the terrain was unchallenging. Best of all it was virtually car-free. 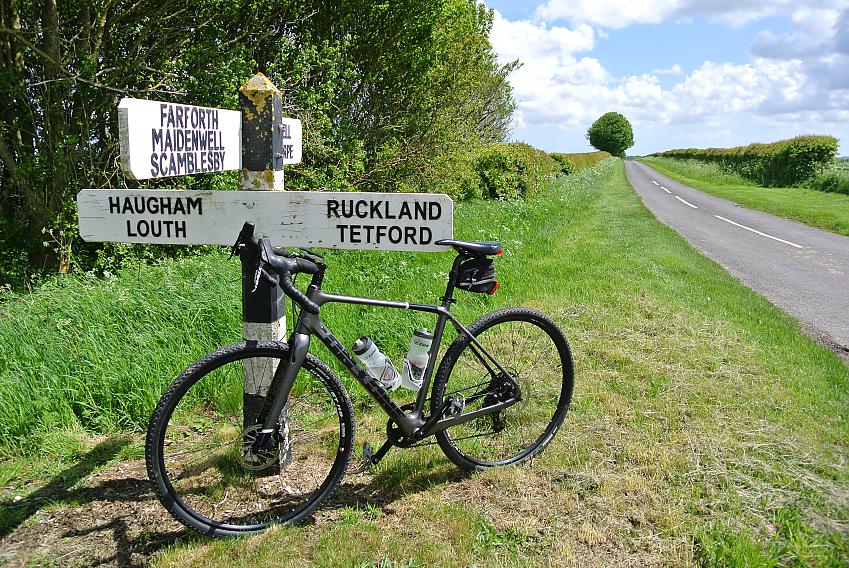 Veering west into the heart of the Wolds, we rode on minor country lanes and a few bridleways, since we were both on gravel bikes. Even on tarmac we would bowl along for minutes at a time without seeing another vehicle.

Blue, cloud-pocked skies rose above rolling fields of bright yellow rape and emerald green cereals, interspersed with neat farms and tidy, attractive little villages. The only sound was the hum of our tyres and the birdsong from leafy trees and blossom-dotted hedgerows.

Eventually we pulled over for lunch at the Post and Pantry in Donington on Bain, where I had the finest ginger cake of my life, before continuing on our way past the only intrusion from the 21st century that we’d seen in hours – the 351-metre Belmont transmitting station, once the tallest in the world.

Turning east to ride back to Louth, we tackled the aforementioned Red Hill, from the summit of which a marvellous 4km ridge ride allowed us to see across much of north Lincolnshire before eventually depositing us back on the outskirts of town.

Mainly on the plain

Our second day’s riding would be far easier: a loop out to the coast at Saltfleet, on terrain as flat as a billiard table. We never got above the 20-metre contour line at any point on this ride, which was unfortunately cut short by torrential rain.

This kind of landscape won’t appeal to everyone, but I’ve always had a fascination with these horizontal, empty and indefinably melancholic panoramas, with their vast views and almost total absence of humanity.

Leaving Brackenborough Hall towards the village of Alvingham, the quiet roads became literally deserted as we traversed the bridleway across Conisholme Fen and beneath the whirling blades of a small windfarm. Then we hit the longest section of A-road on our entire trip: the 3km or so into North Somercotes.

We were soon able to leave the traffic behind, darting south off the A1031 onto what were little more than rough tarmac tracks across the ‘ings’. The name that reveals the region’s links with the Vikings; it’s an old Norse word referring to water meadows and marshes. 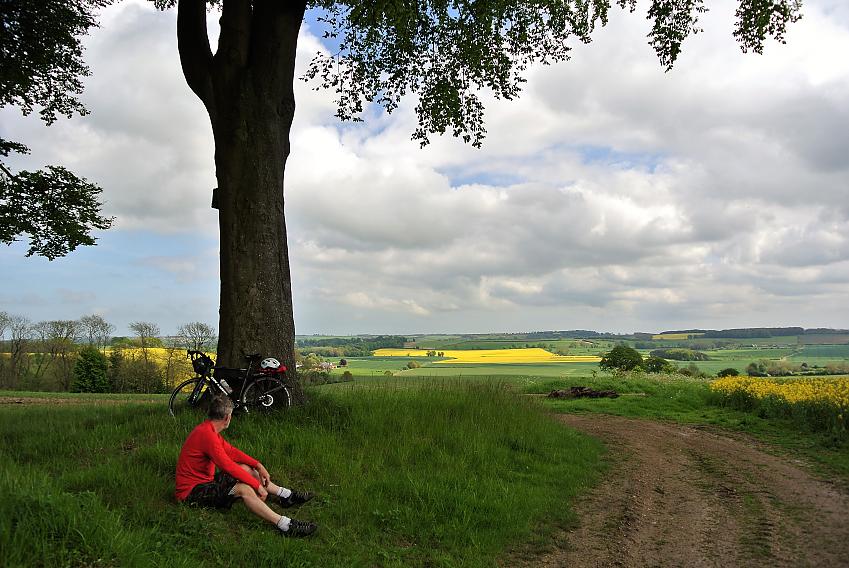 Looking over our shoulders we could see the Wolds rising towards the sky a few miles away, a sky that was a deep, bruised blue, and from which dense sheets of rain were falling. It was heading our way.

Ten-minutes later it arrived. Cold, hard pellets of rain bounced off the road. Even the swans on the dykes we were riding alongside rushed to get out of the downpour. “Coffee stop!” Mark shouted. The only trouble was we couldn’t find one. It is a quiet area…

Just south of Saltfleet we decided to cut our losses and head for home (and coffee). Riding past Saltfleetby St Clement and Saltfleetby St Peter (pronounced ‘Soloby’), we arrived back at Brackenborough after a mere 46km of riding.

Given our aborted ride, Mark and I decided that our last day in Lincolnshire should take in a defining mix of coast and hills, which is why the following morning we were to be found riding alongside the amusement arcades and candy floss stalls of Mablethorpe after an easy jaunt across the ‘ings’ from Louth.

Threading our way between hyped-up kids, stressed parents, barking dogs, crazy golf courses, and boating ponds, we eventually turned inland as the sun burst forth, our destination the bucolic Claythorpe Mill, where we fed ourselves, along with the ducks and trout in the millpond. 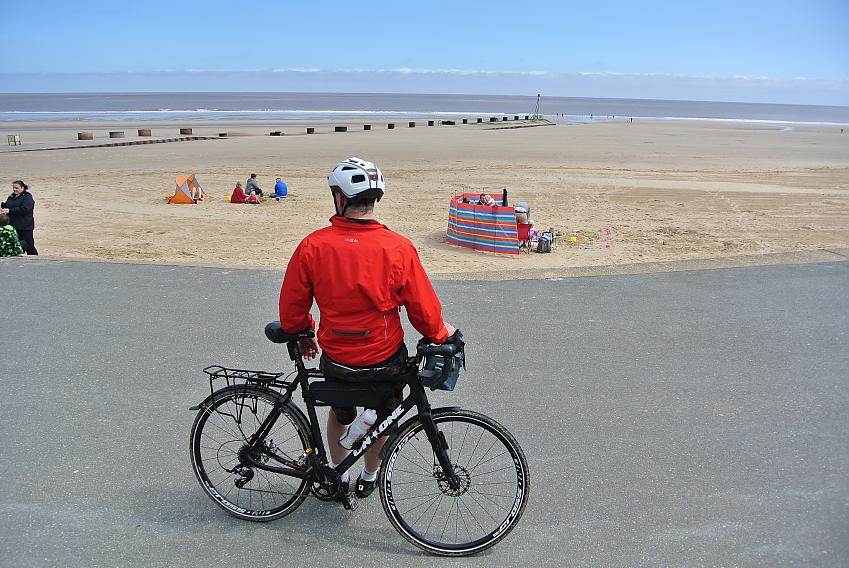 From Claythorpe, the Wolds did what the Wolds seem to do so well, leading us gently on to elevated riding with the minimum of effort on refreshingly quiet roads. The views went on for miles across a quintessentially English landscape of fields, farms, hedgerows, woodland and villages. I’m sure I could see Lincoln Cathedral way off to the south.

With the sun shining and the wind at our backs, this really was glorious riding. As our longest day on the bikes (94km) came to a close at the Boar’s Head pub in Louth, I wondered why we hear so little about the Lincolnshire Wolds as a cycling destination.

You can make a ride here as easy or as hard as you like, the roads are some of the quietest you’re ever likely to encounter in England, and Louth makes for a lovely base. Get there quick before everyone else discovers it…

Do it yourself: Lincolnshire touring

Louth is an excellent base for cycling in Lincolnshire as it sits between the Wolds and the flatlands towards the coast, offering routes to suit all levels of ability and fitness. It’s an attractive market town with a fine selection of independent shops, bars and restaurants, and is well worth exploring if you have any rest days.

Louth is easily reached by road but unfortunately doesn’t have a train station; the nearest stations are in Grimsby and Market Rasen, both about 15 miles away.

I’m glad I had…A new Madison Peloton waterproof jacket for the rain, and my Alpkit Gourdon 20 lightweight backpack for camera and other essentials.

Next time I would…Check out more of the bridleways and other off-road trails in the Wolds.