Drop-bar bikes that go where other gravel bikes fear to tread. Dan Joyce tests a Mason InSearchOf and a Salsa Cutthroat

Gravel bikes were once cyclocross bikes with geometry tweaks and marketing makeovers. Arguably some still are. But not the two on test. These have 55mm 29er tyres and loftier off-road aspirations, like the Tour Divide and the GBDuro.

Mason’s InSearchOf (ISO) was explicitly born out of the limitations of existing gravel bikes. They say it’s “still firmly in the #FastFar, #ContinentCrushing vein but… steeper, rougher and deeper terrain are well within its capabilities”. Salsa, whose big-tyre, drop-bar Fargo predates the gravel bike boom, call their Cutthroat “an ultra endurance bikepacking/gravel bike”.

Sounds too niche? Let me offer an alternative description: bikes for the stuff we used to ride on MTBs in about 1990. But further, and perhaps with bags. Not MTBs, then, but ATBs: all-terrain bikes. 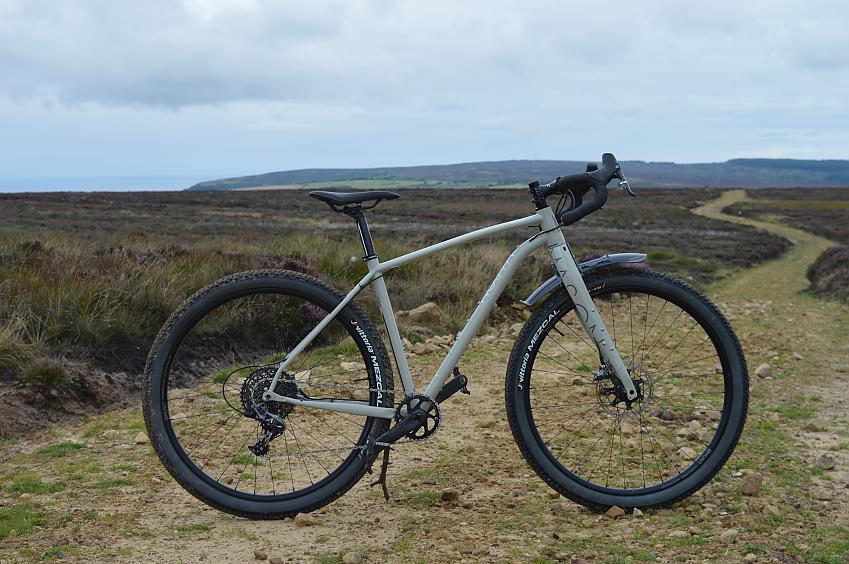 Drop-bar 29er designed to go the distance on tracks where other gravel bikes might crash or pinch-flat. Load-carrying guard on Hotshoe fork

In a blind test – picking it up, not riding – you might think the Mason ISO was aluminium because it’s lightweight for a big-wheeled bike. The frame is steel, albeit very nice steel: Dedacciai Zero and Reynolds 853, hand-built in Italy.

The frame design is well thought out. Despite squeezing 29er wheels into a medium-sized drop bar frame, there’s no toe overlap. This hasn’t been accomplished by simply stretching out the rider. With its tall front end, short stem, and short reach drops, the riding position is fairly upright and relaxed. 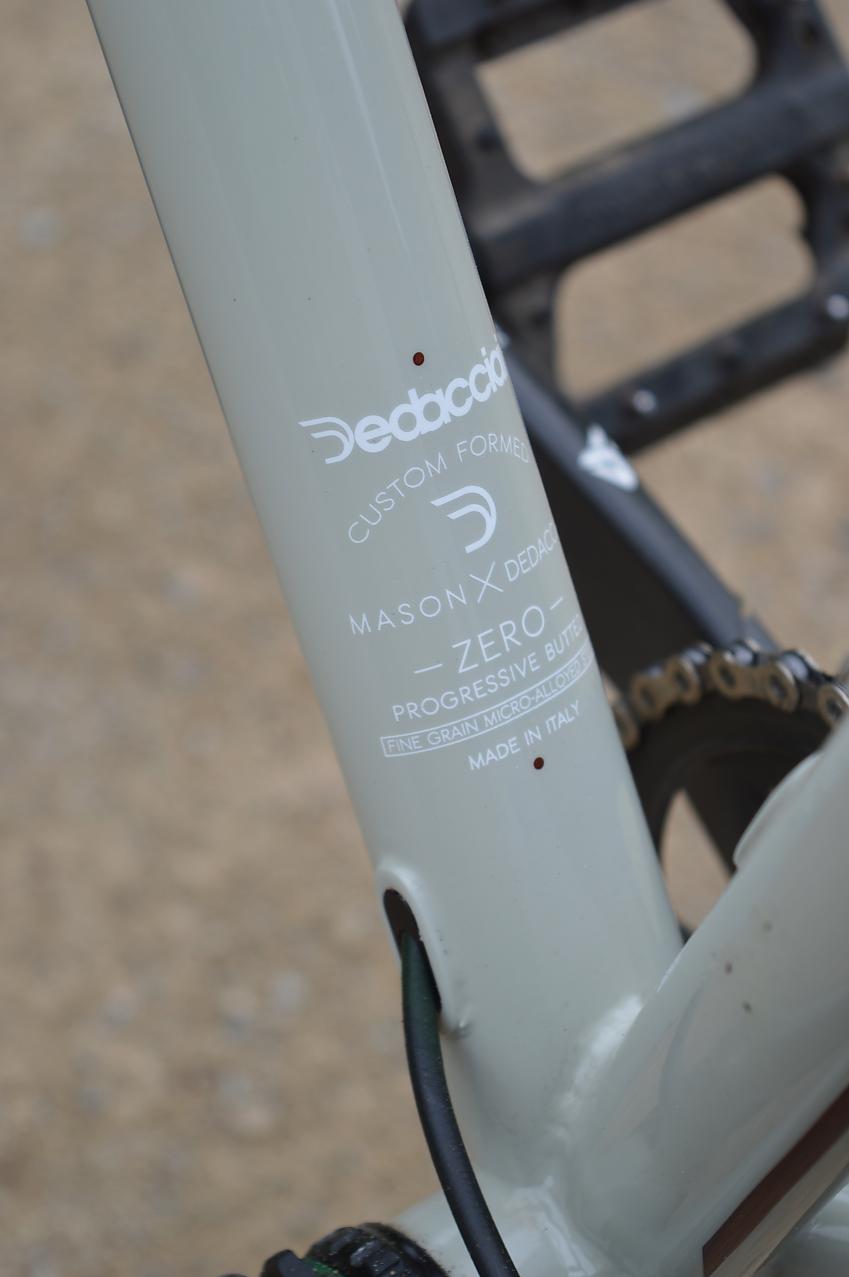 The butted steel frame of the Mason is relatively light and has some nice details, not least a threaded bottom bracket

There’s an unusual kink in the top of the down tube. It’s there because, while the ISO ordinarily has a tall (483mm axle-to-crown) rigid carbon fork, it can be fitted with a 100mm suspension fork for even rougher rides. Kinking the down tube prevents a suspension fork crown from hitting the frame during tight turns.

Frame and fork clearances around the 29×2.25in tyres are huge. The ISO is designed to accommodate 29er tyres up to 2.5in and 27.5in tyres up to 2.8in. More space within the chainstays means that, with a conventional 73mm bottom bracket shell, there’s less space on the outside of the chainstay for the chainring: a 34-tooth single ring is as big as will fit. There’s no option to run a double or triple. 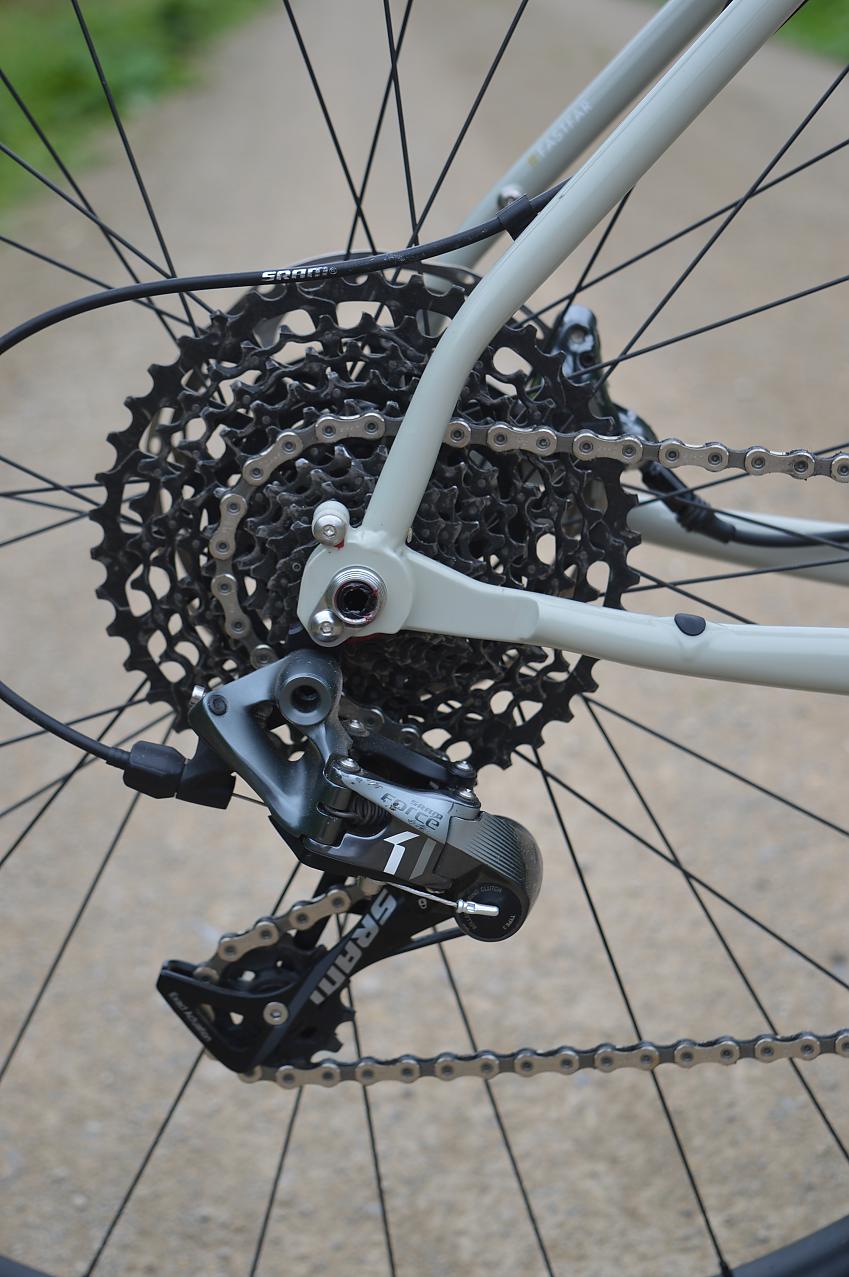 There are frame and fork fittings for just about everything: bottle and bikepacking cages, front and rear racks, mudguards, and even an internally-routed dropper seatpost. There’s also routing for a hub dynamo cable through the fork.

Mason call this full-carbon fork their Hotshoe fork. There are mounts on the crown to fit Mason’s load-carrying Shutter mudguard (included and pictured). That’s rated for 2kg and is thus best for loads that are bulky and light, such as a sleeping bag. Alternatively, you can fit Mason’s Condenser rack (£100), rated for 8kg. 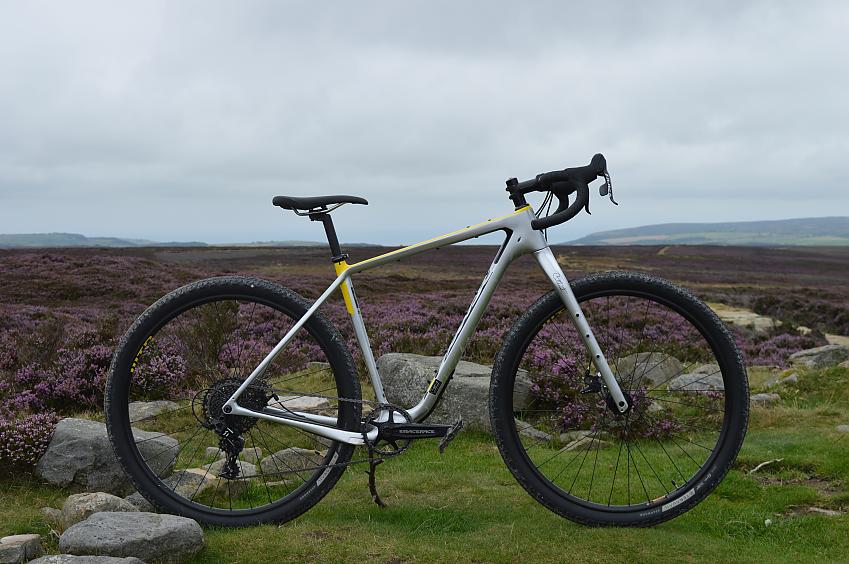 The Salsa is a gorilla-handle-barred gravel bike with go-almost-anywhere 29er wheels. Could also be built up as a sporty all-rounder

Salsa’s Cutthroat has a  carbon frame as well as a carbon fork. It’s not much lighter than the Mason overall. That’s partly due to the fork, which has an aluminium steerer rather than a carbon one, and partly the fact that it has some less expensive and heavier components, such as mechanical disc brakes.

The frame itself has all the bikepacking fittings you’d expect. It will take pannier racks front and rear but you’ll need a seatpost clamp with integral eyelets as there are no seatstay mounts. There’s no easy way to fit full-length mudguards; you’d need to lash something up with cable ties and helicopter tape. There is routing for an internal dropper post and a hub dynamo cable. 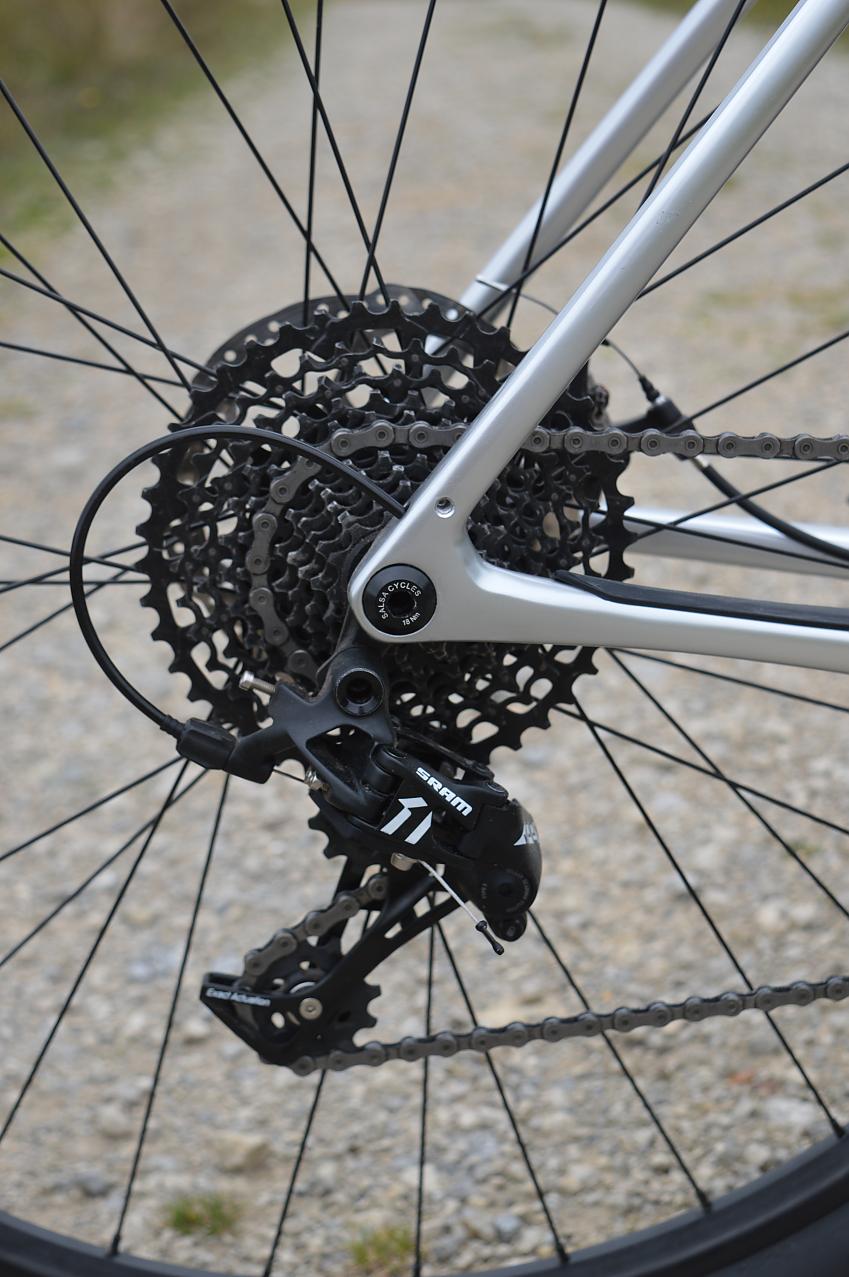 Like the Mason, the Salsa has a tall front end as it’s designed for a 483mm rigid fork or a 100mm travel suspension fork. And like the Mason, tyre clearances are generous. The fork will comfortably fit a 29×3in wheel. (I couldn’t test ride it like this as the bulky Spyre calliper hit my 29+ wheel’s spokes.) The frame has less space: 29×2.4in is the recommended and practical maximum, and there’s no option to fit 27.5×2.8in tyres.

While there’s a bit less room within the chainstays, there’s significantly more for the chainring. The Cutthroat comes with a 36-tooth ring and will take a 40. There’s space and cable routing – including for Di2 – for a front derailleur and a double chainset too. Maximum chainring sizes are: outer, 50t; inner, 36t. Big-gear fans will appreciate the stiffness of the frame’s beefy bottom bracket junction. It is a press-fit bottom bracket, however, which won’t please everyone.

Both bikes have 1×11 SRAM drivetrains: Apex for the Cutthroat and higher-spec Force for the Mason. I couldn’t detect any differences in shifting performance. The gear range is much the same too, for although the Mason has a smaller chainring it also has a tiny 10-tooth sprocket on the cassette. This will inevitably wear more quickly. Dinner-plate 42-tooth sprockets provide both bikes with low enough gears for demanding climbs, as long as you’re not heavily loaded.

Braking performance is different. The Mason has hydraulic levers and callipers while the Salsa has mechanicals. The TRP Spyres of the Salsa are top tier for mechanical discs and they’re fitted with compressionless cable outers, but they’re still not as well-modulated or as powerful as the Force HRD brakes of the Mason. The Mason has a larger, 180mm front rotor – the first I’ve seen on a flat-mount carbon fork – which helps. 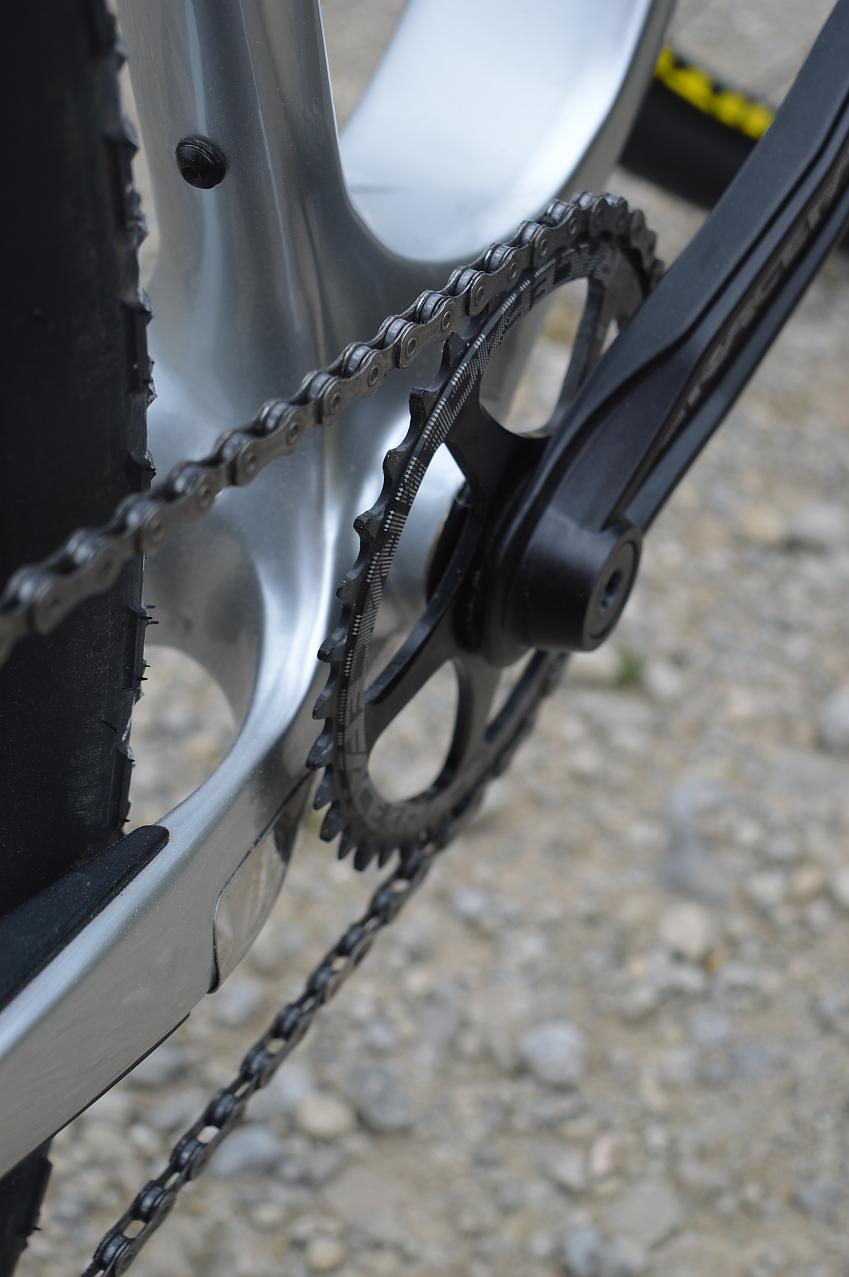 Both bikes have wheels with a sensible number of spokes, fitted with lightly treaded off-road tyres that don’t buzz and drag too much on tarmac. The 2.25in Vittoria Mezcal tyres of the Mason are quite a bit wider than the 2.2in Teravail Sparwood tyres of the Salsa. That’s because they’re fitted to 30mm wide rims rather than 25mm. Although the wheels and tyres of both bikes are tubeless ready, only the Mason came set up as such. With a bigger air pocket and no tube, the Mason’s tyres could be run significantly softer.

The Mason’s front wheel features a SON 28 hub dynamo. Ordinarily this is an upgrade: £280 for the dynohub wheel (plus £310 for Supernova Pro2 lighting, which the test bike didn't come with). Standard builds get a non-dynamo front wheel or, if you prefer, ‘back country’ 27.5in wheels fitted with 2.8in tyres.

Both bikes are equipped with flared drops, the Salsa’s being much wider. I found the saddles of both bikes comfortably shaped but somewhat unyielding, given the more upright riding positions the bikes put you in. 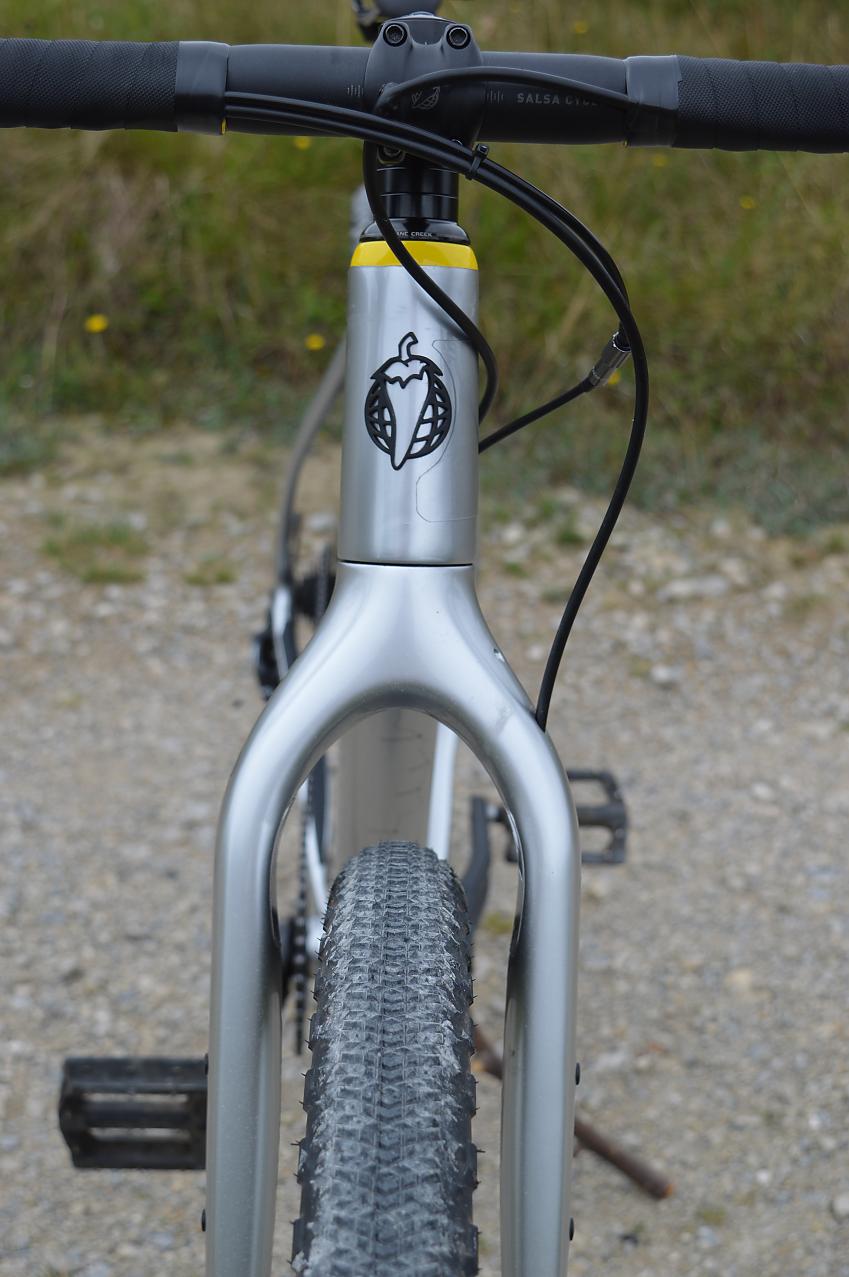 Most gravel bikes do fine on the hardpack and gravel surfaces of forest fire-roads. I also took the test bikes on singletrack and rocky moorland bridleways. Unsurprisingly, 29er mountain bike tyres were much more comfortable and capable than 38mm gravel tyres. The riding positions of both bikes were better off-road too. Sitting more upright takes your weight off the front wheel, so it doesn’t hit bumps and rocks as hard and you don’t feel like you’re going to dive over the handlebar.

With its wider, softer tyres the Mason ISO was particularly surefooted. One of the bridleway descents I rode on the moors is like a rocky stream with (most of) the water removed. On the Mason, it was more like riding a mountain bike, which is what I’d usually pick for that route. Even with hands on the drops, where they couldn’t be bounced off the bar, it was easy enough to unweight the front wheel and lift it over rain gullies and rocks. On easier terrain, the on-the-hoods riding position was close enough to a conventional drop bar that it felt like cruising along on a lightweight tourer.

Left: The Mason is narrower at the hoods, wider drops. Right: The Salsa is wide everywhere but the tops

The Salsa’s ride feel was dominated by its huge Cowchipper handlebar. More width means steering leverage but it also forces your body to lean further forward into the drops because your arms are splayed wider apart. That meant a bit more weight on the front wheel than on the Mason and a preposterously wide on-the-hoods riding position; I much preferred the Mason’s narrower Ritchey VentureMax handlebar. The Salsa skittered over loose rocks and gravel more than the Mason, but that was primarily down to tyre pressure. A tubeless conversion would fix that.

Both bikes handled fine with loads of several kilos and I image they’d be equally good with several more. While they will take panniers, I’d only use those on road. These bikes may take you on expeditions but they’re not heavy-duty expedition tourers per se.

Many gravel bikes don’t deliver on their promise to go anywhere and do anything. These two do – assuming that, by 'anywhere and anything', we mean: primarily soft-bag luggage; off-road terrain no worse than an easy red route; and steadier-paced road riding. Never mind adventure racing, which few people actually do, both these bikes would be ideal for recreational bikepacking on routes like King Alfred’s Way and the Great North Trail.

The Mason InSearchOf strikes a nice balance between gravel bike and mountain bike: it’s like a cross-country 29er designed for drops, with the versatility that implies. As a bike for off-the-beaten-track rides of any length, it’s very capable and has some really nice details.

In contrast, the Salsa Cutthroat feels more like a conventional gravel bike with the tyre volume turned up to 11. I think I'd fit a narrower bar, a 40-tooth chainring, and wide, fast-rolling Rene Herse tyres to make the most of its sporty on/off-road potential. 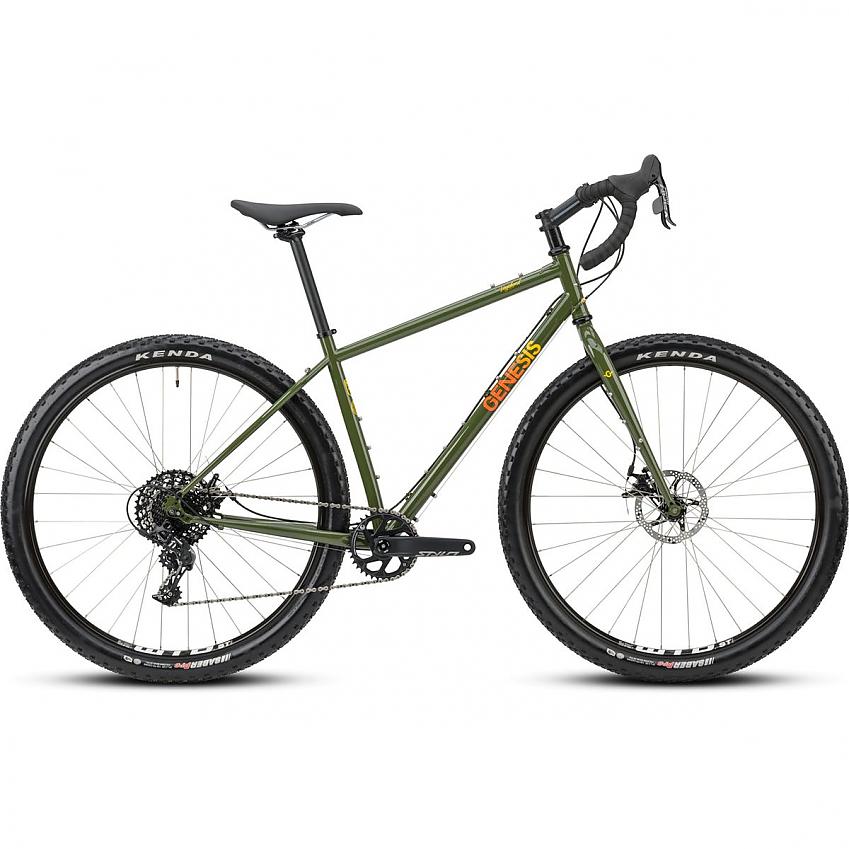 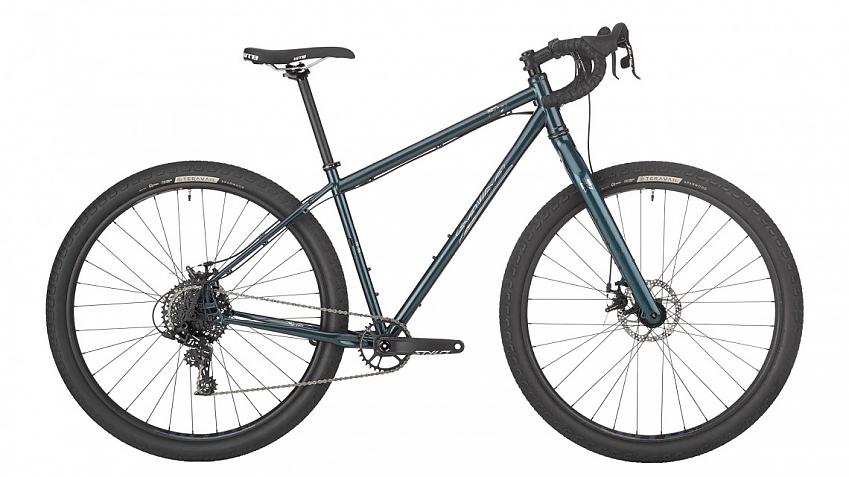 The original drop-bar 29er is pitched as an off-road tourer. Its steel frame and carbon fork will take 29×3 tyres, and its Alternator Dropouts allow singlespeed or Rohloff hubs.

At Cycle, we are proudly independent. There’s no pressure to please advertisers as we’re funded by your membership. Our product reviews aren’t press releases; they’re written by experienced cyclists after thorough testing. This test featured in the October/November 2021 edition of Cycle magazine. 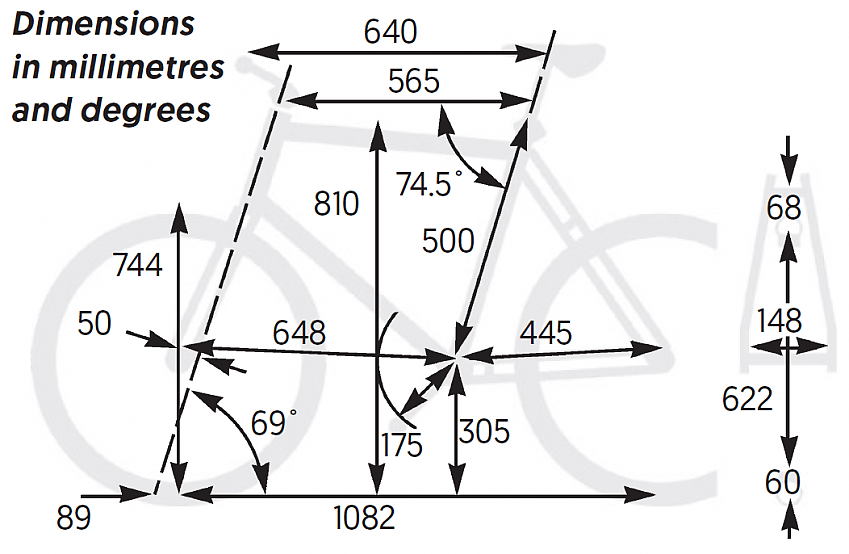 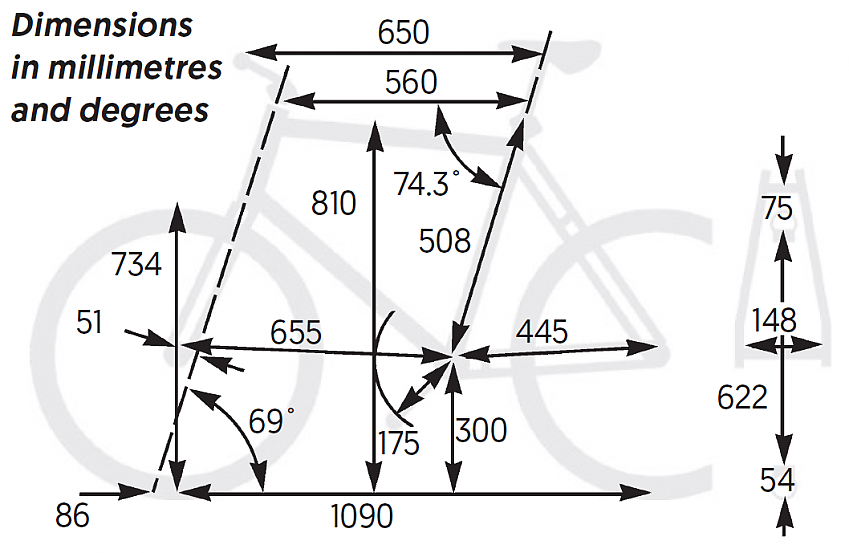