Cycling UK member and campaigner Helen Knell explains how she led a successful campaign that will benefit all road users, not just cyclists, on the Isle of Sheppey in Kent.

In December 2014 I was nearly knocked off my bike by a car passing too closely when I was riding along the Lower Road on The Isle of Sheppey, Kent.

For those not familiar with the area, it is a very busy road, just wide enough for two cars and dangerous for people cycling when motor traffic is heavy and impatient. I used it out of necessity, as do other cyclists, because it provides the only link between the bridge from the mainland and the eastern end of the island.

With a lot of new housing recently introduced to the island, motor traffic has increased, putting unplanned-for strain on the road network. This is then aggravated by holidaymakers in the summer months. It's clear the road is inadequate for all road users - not just for cyclists.

As well as being frightened by the near miss, I was also very angry about the lack of a safe cycling route, so I started a campaign to get one.

The local paper, the Sheerness Times Guardian, ran an article about the incident and, as a result, enough people came forward to form a campaign group. We received advice from the husband of a friend, Roger Truelove, who was a County and Borough Councillor. To quote him: “From the start I advised the campaign group to present the case for a cycle/pedestrian track in line with the wider campaign context of major changes to the road. That helped ensure much greater traction when they lobbied the local transport panel and the Kent County Council (KCC) Highways and Cabinet.” Roger also helped to arrange for us to make a successful bid for a small grant for local projects from the council. 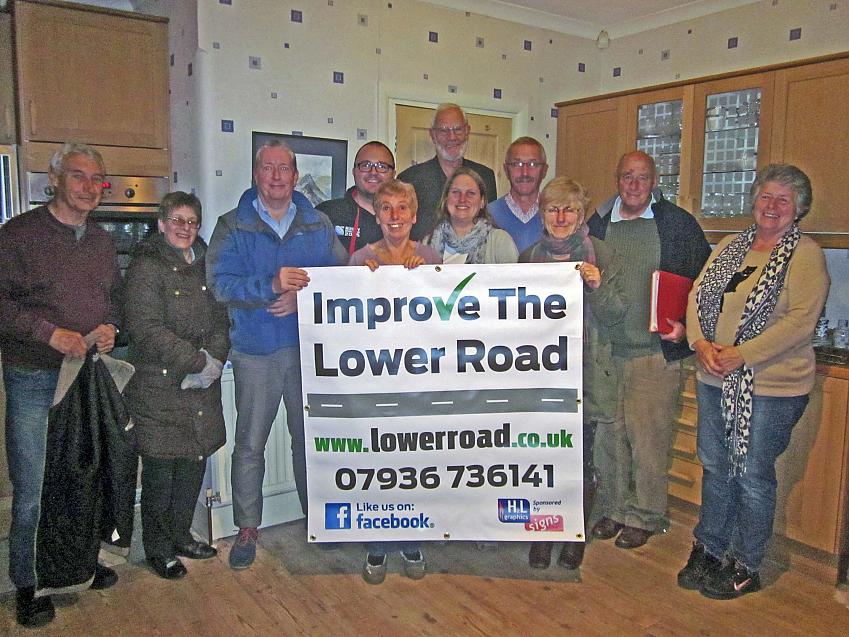 The campaign group with local Borough and Parish Councillors

We followed this advice, setting up a website and an on-line petition pointing out the need for improvement for all road users. We also used social media and the local radio station to advertise the campaign. Local contacts kindly printed banners free of charge, which we fixed to frames. Two local farmers gave us permission to use their land and erected the banners beside the road where motorists were stuck in traffic jams. We needed a few people to maintain these signs when the weather affected them, but largely it was minimum effort, thanks to working with the community.

Support for the campaign came from County, Borough and Parish Councillors, who welcomed a new impetus to their attempts to secure improvements to the road over such a long period. The Sheerness Times Guardian was also instrumental, as it worked hard to keep the issue alive with plenty of coverage. The local Cycling UK group also gave us support throughout.

Unfortunately, the only dissenter was our local MP, Gordon Henderson, who could not understand our strategy and would not support the campaign. He chose to interpret the situation as cars or bikes not cars and bikes and disappointedly ignored the safety of vulnerable road users when he said that a cycle/pedestrian route was not in the interest of the majority of his constituents, who were motorists.

We secured the support of motorists as well as cyclists with our 2,164 signatures on the petition.

Fortunately, not everyone shared the same views as Mr Henderson as we secured the support of motorists as well as cyclists with our 2,164 signatures on the petition. Another KCC Councillor persuaded the transport spokesman from KCC to come down to Sheppey to receive our petition and see the road for himself. He was clearly appalled by the inadequacy of the road, and later came down to address a parish council meeting where he had a hard time from angry residents. I spoke at a meeting of the Swale Joint Transportation Board and gained its support.

After this, it was really a waiting game while the politicians kept the campaign simmering.

Eventually a new Local Plan was published which included replacing traffic lights with a roundabout to ease congestion and a cycle/pedestrian track “when the road is improved”. KCC managed to gain enough funding to build the roundabout but not improve the road and we were afraid that the cycle track would not happen for a long time due to the council being very short of funds. We were therefore very surprised to hear in October 2017 that most of the funding needed for the road improvements and cycle track had been found, with the balance to be provided by a developer’s section 106 contribution.

I met the planners delivering the project in early December. The roundabout should be complete in December 2018 and further road improvements in December 2019. The design for the cycle track is completely acceptable, 3.5 m wide and separated from the road by a 1.5m verge. It joins up sensibly with other cycle tracks and stays on one side of the road.

Encouragingly, it may have been our campaign which secured the funding. The planning officer in charge of the project told us they thought that our campaign had had a positive influence on the bid for funding, as it showed there was support from the active local pressure group.

It's been a long road since December 2014, but despite not seeing myself as a cycle campaigner or having experience in that area, it has not been difficult.

Other cyclists were keen to help and a campaign group does not need to be big: we had at the most six active members. Campaigning does not have to cost much either, as in the end we used very little of our grant, spending it mostly on the website. Many of our costs came from local sponsorship, as we found our campaign had the support of local businesses. This support, coupled with the use of our local contacts, had a great effect.

Ultimately, I found the most important thing is to work with other people who have a common purpose. We can only move forward on improving cycling infrastructure if we can break down the “us vs them” mentality. At the end of the day, we're all road users and shouldn't have to consider ourselves as “people who drive OR cycle” as most often people are both - just at different times!

If, like Helen, there's a local issue you want to change, then check out Cycling UK's advice for local cycling campaigners.