Rachel and her local church fundraise £1,000 for the Edinburgh All-Ability Bike Club

Rachel and her local church fundraise £1,000 for the Edinburgh All-Ability Bike Club

Rachel Wilson, aged 28, has been coming to the Edinburgh All-Ability Bike Club since it opened and is one of the project’s very first participants. Two years later, while she is still a regular rider with the ABC, we’ve since discovered that she has been on an impressive fundraising journey with her local church based in the south of Edinburgh, the Reid Memorial Church.

Thanks to funding from the RS Macdonald Trust, the Edinburgh ABC is now well into its second year, with open sessions every week that offer people extra support and encouragement to get cycling. The ABC welcomes people from all backgrounds and of all abilities, with a fleet of adapted and standard cycles so that everyone can enjoy a bike ride on some of Edinburgh’s well-maintained off-road paths in the north of the city.

Over the last 10 months, Rachel Wilson, her family and fellow parishioners have raised £1,000 for the Edinburgh ABC project.

We met Rachel and her father Keith, as well as Reid Memorial Church representatives Graham and May Annan and Suzanne and Ali Dalzeil, at an open afternoon ABC session so we could say thank you to the Wilson family and the church’s efforts in raising funds to help the project.

Unfortunately for cycling sessions, the weather outside was appalling, with sheets of rain wrapping themselves around the Bangholm Outdoor Centre in Trinity where the ABC is based. While a few intrepid participants enjoyed a bike ride despite the deluge, Rachel decided to opt for lunch instead.

Rachel was enthusiastic about her experience with the Edinburgh ABC and cycling generally. “I ride the green trike,” she said while eating her lunch. She also told us her favourite cycling buddy: “My daddy.” 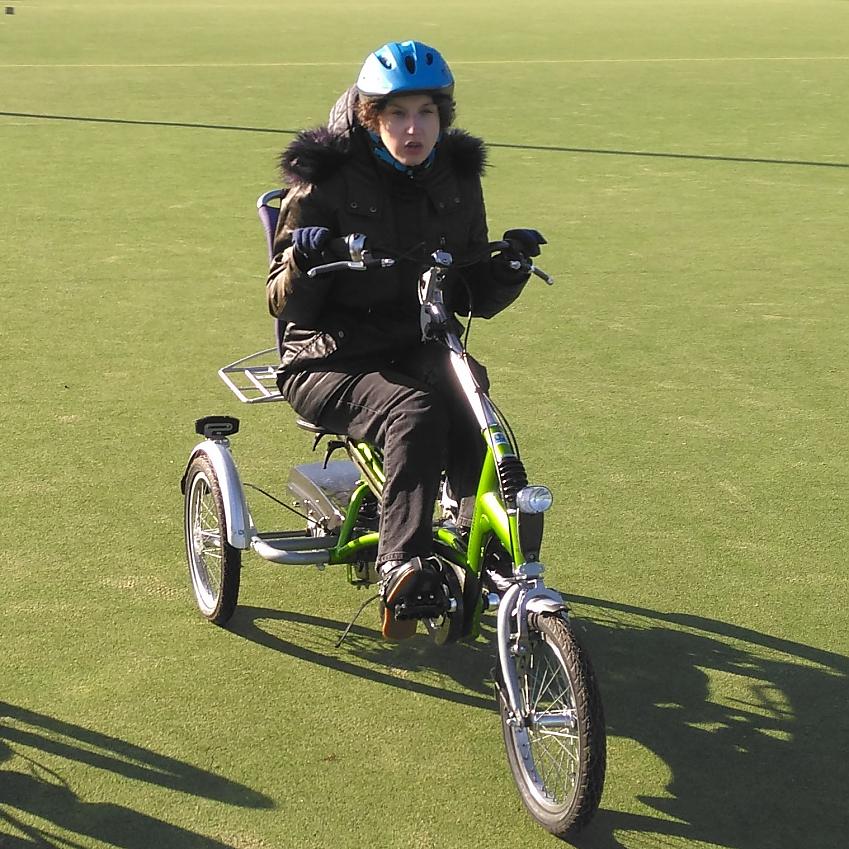 Her dad Keith elaborated, saying, “Cycling with the Edinburgh ABC has made a massive difference to Rachel. She really enjoys it. She’s a wheelchair user and cycling activities have helped with her hips, fitness and general mobility. She used to cycle when she was little – we had her on a baby seat and we also cycled with a trailer, but she’s come back to cycling as an adult now and loves it. She comes to sessions every week.”

Rachel’s cycling steed of choice is a green fixed-gear tricycle, which she rides solo. The £1,000 that has been raised by Reid Memorial Church will go towards a new side-by-side tricycle, which has a price tag of around £6,000. The ABC has access to one side-by-side trike, but it’s so popular that it’s constantly in use and the project could benefit greatly from another in its fleet.

Cycling with the Edinburgh ABC has made a massive difference to Rachel. She really enjoys it. She’s a wheelchair user and cycling activities have helped with her hips, fitness and general mobility.

Graham Annan from Reid Memorial Church told us more about how the donation towards the new trike came about. “Rachel is a congregation member of the church,” he said. “Fellow church members love her personality and vibrant, positive nature. They fundraise for local charities as well as for the church, and so decided to raise money for the Edinburgh ABC due to Rachel’s involvement in the project.”

Over the course of 10 months, parishioners raised £1,000 through the sale of home baking and monthly coffee mornings. That is a lot of coffee, tea and cake to get through to reach a £1,000 total, so we took the opportunity to thank Graham, May, Suzanne and Ali for the church’s impressive fundraising efforts.

Edinburgh ABC Development Officer David Glover and project volunteers were absolutely delighted with the donation. “This is a significant donation that will go a good way towards raising funds for the side-by-side trike,” David said, “We’ve got a crowdfunder to encourage donations, and the Reid Memorial Church’s contribution will make a big difference to us reaching our target.”

Rachel plans to continue cycling at the Edinburgh ABC’s weekly sessions. We wonder if perhaps she has also inspired some of her fellow church members to get cycling again. We can guarantee that the Edinburgh ABC will be on hand to support any new riders.

If you’d like to help the Edinburgh ABC to support more people to cycle, you can donate to the side-by-side trike campaign here.