How do you revive your local cycle forum? Cycling UK local campaigner Peter Smith explains how he did just that in Crawley.

Cycling UK Volunteer Support Officer Laura Brooks attended the Crawley Borough Council Cycle Forum and met Cycling UK local campaigner Peter Smith and other members. The forum, despite only being revived in 2008, is now very active and effective, so she asked Peter how this had come about.

I discovered that Crawley Borough Council had a cycle forum, but that it was not active. I made contact with the Town Hall via my local councillor and planned to meet the planning officer responsible for the forum. On my initial meeting, I was surprised to discover that there were funds available for cycling and cycle schemes as a result of Section 106 money. It seemed clear from the outset that the key activities for the forum were to organise and identify what the local authority should deliver for cyclists.

There was also an active West Sussex Cycle Forum and we undertook to attend and participate in that so we could have a mechanism for involvement in county activity as a whole and provide the Crawley perspective.

We reactivated the forum and decided that it would be constructed as an organisational forum rather than a general public forum. This was important in our case as the objective was to begin to release available funds into schemes, initiate schemes and improve cycling levels in the town. We have not ruled out having a public forum at some time, but are keen to maintain an overall perspective of positively working with the local authorities and others, rather than representing a group of people with a long list of complaints. This was the overall ethos from the outset.

We have a Cycling UK local campaigner and two Sustrans representatives – one is the local ranger co-ordinator, who offered to chair the forum - and the other is the area manager. We also have a representative from the British Horse Society who is active on Rights of Way issues. We were also pleased to receive support from Cycling UK National Councillor Richard Bates, who is a Cycling UK campaigner for West Sussex and a member of the Cycling UK Advisory board, and who frequently attends our meetings.

This group represents the voice of the ‘customers’ or consumers, i.e.: the cyclists. Its strength is that it draws on a wide constituency and experience and benefits from national support via Richard Bates and Cycling UK's Volunteer Support Officer. It is a small group, which ensures that disagreements can be resolved fairly easily and in an efficient way (down the pub!).

The borough council has a planning officer who organises the meetings and room bookings, etc. It soon became clear that although the borough had Section 106 money allocated to cycling, the delivery authority was the West Sussex County Council. This relationship is, quite frankly, somewhat inefficient and un-productive, but is the way that local government works in Crawley. So we invited the WSCC cycling officer to also join the forum.

This grouping worked well for some time but we soon realised that on some occasions, in order to get some ‘traction’ in our activities, we needed to engage with councillors. We invited local county councillors to attend (of which, two did) and asked the ruling group to nominate a 'Cycling Champion'.

We had a tremendous benefit initially as WSCC recruited a former Cycling UK employee, Simone Makepeace, as cycling officer and she worked very effectively with us to put the cycling message and view across at WSCC in a very productive way. Unfortunately this situation has now deteriorated significantly with the removal of the cycling officer post as part of the ‘localism agenda’. We are currently trying to understand what that means and how we will engage with WSCC going forward. But we intend to tackle this in the same way as previously, by understanding how the new system works and engaging with it.

We immediately did several things.

Introductory Tours: Firstly, we invited council officers, particularly the WSCC cycling officer, on a ride around the town to view the challenges facing cycling. The key objective was not to go over the list of all the problems, but rather to demonstrate the potential for cycling and increasing uptake in cycling; to showcase those existing elements that are good for cyclists and to illustrate some of the major problem areas.

These rides were and are very much focussed on ‘selling’ cycling in the town to the people who are responsible for providing the facilities – an easy sell in some cases, but less so in others! We have subsequently taken many people on these short tours including council officers and councillors. This activity is quite simple to do but helps to increase awareness and, more importantly, explain a cyclist’s view of the world to the people who control delivery.

Cycling Facilities Report: On investigation there did not seem to be any overall ‘joined-up’ view of what needed doing in Crawley, particularly as the borough and the county had different lists of cycling related ‘things’, some of which were driven by fairly obscure sources. Some emanated from earlier reports or studies, some from the different funding sources, some from councillors, etc. We organised some rides with local Cycling UK member groups and Sustrans supporters. This group produced a catalogue of cycling facilities organised as missing or in need of repair/improvement. This list was then reviewed and prioritised by the cyclist representatives on the forum.

The key intention here is to have a list of prioritised schemes ready, so that whenever any funds or activity takes place, the cyclist representatives can produce their suggestions and put them on the table.

One key element is that the overall approach was that of a novice non-cyclist’s perspective, i.e.: a utility cyclist and not a regular Cycling UK club rider. However, we use Cycling UK members' knowledge and enthusiasm to articulate the needs of people who would cycle as a means of transport.

Lobbying: WSCC highways schemes are prioritised by county local committees. These hold their meetings in public, so it has been necessary to both lobby the councillors on the committees and to attend the public meetings, where the press are present, to argue for cycle scheme priorities.

In addition, press releases have on occasion been issued, but only as a last resort. Experience suggests that more progress can be made by persuasion and (relatively) private lobbying than by the rather crude sledge hammer of bad publicity. But we have had to resort to the Press in respect of potholes, which just do not receive any proper attention in Crawley. Please see an example of a pothole article that was published in the Crawley and Horley Observer and also This Is Sussex.

Action:  We then worked with the WSCC cycling officer, as the highway authority, to get the top-priority schemes progressing. This work was driven by our list and by the availability of funding. Some high-priority schemes are awaiting funds and some lower-priority schemes have been done due to funding availability. But the key thing is that the cycle forum has been involved in them all at a very early stage.

We have recognised that there are many people who have some element of cycling in their responsibilities, both in the councils, the councils' sub-contractors and the councillors themselves. There is typically a desire to do something for cycling, but not always the understanding of a cyclist’s needs or the correct level of engagement at the appropriate time.

All too often we have seen ‘cycle facilities’ appear on the ground that are inadequate in some way and that could have been improved, usually at no additional cost, if the relevant input had been provided at design time.

By engaging with the council officers we have sought to be consultees when schemes are designed. This has included being aware of active schemes via our prioritised list and via regular reports and status updates from the Cycling Officer at forum meetings; receiving plans for review; holding on-site discussions with the planners (usually employees from sub-contractors); and answering questions or queries from anyone involved in the process. 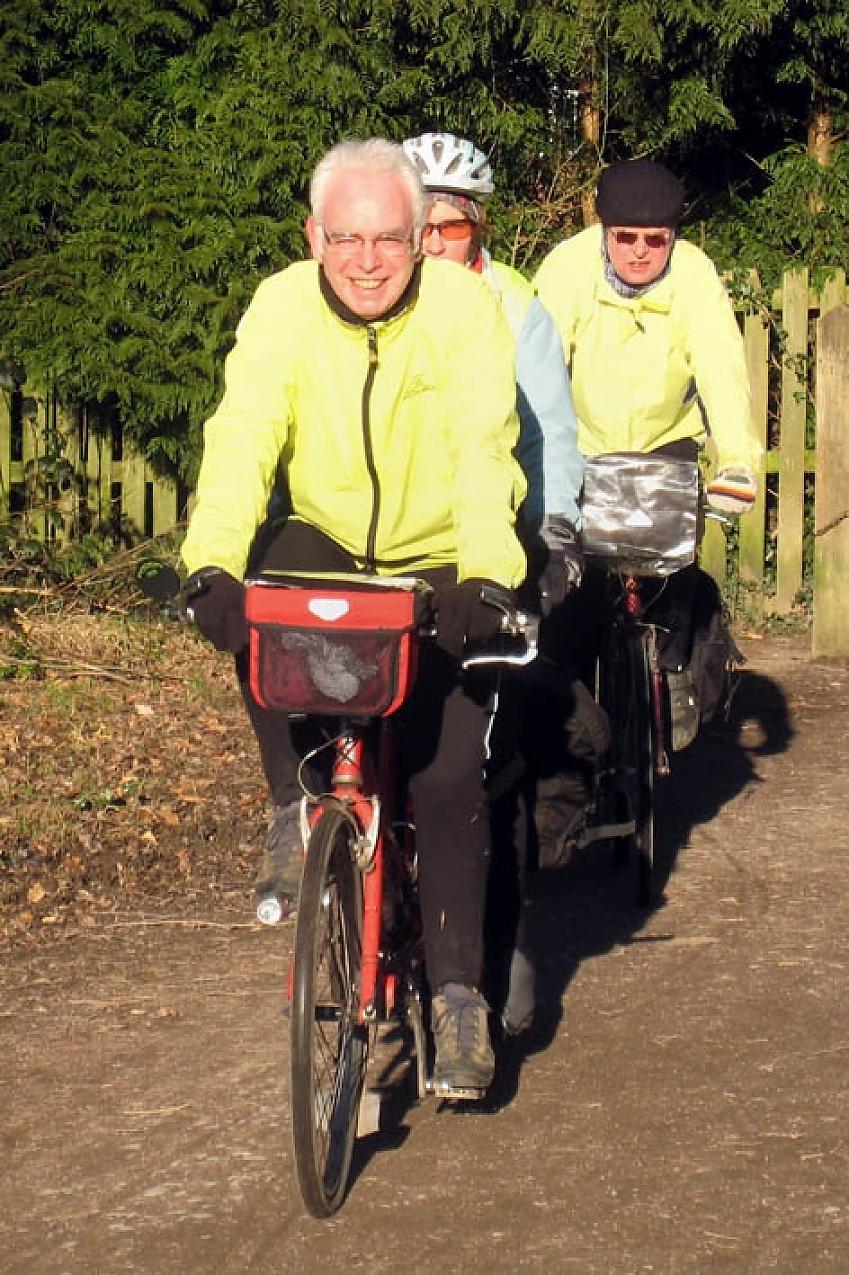 We always comment on draft plans using a template that requests compliance with standards (LTN 2/08 etc) and offer help with amendments/updates, etc. Usually, we try to include photographs of issues, especially as the WSCC is located at the opposite end of the county and doesn’t necessarily have detailed local knowledge of the sites involved. Also, it uses sub-contractors who usually have a different individual doing the plan each time.

We also persuaded Crawley Borough Council to produce weekly lists of planning applications. This is vital as we can review the applications that are likely to have Section 106 money related to them and/or transport implications, and get involved and make comments at the application time. This is, by far, the best time to get ‘in the loop’ as the planning authority can make cycle facilities a condition of the application and require the developer to fund them.

Once you achieve this you only (!) need to monitor that the relevant authorities deliver to their commitments. But this is much easier than finding out when the contractors arrive on site to implement some poorly designed and half-baked cycle facility!

We have undertaken a range of other activities to encourage cycling – it’s not all about infrastructure.

We have set up an annual ‘Crawley Bike Ride’ during Bike Week supported by the council (this also introduces our local member group and we have recruited a few new riders as a result). We run a Facebook page/group. We encourage both the county and the borough councils to improve their websites (they both now have cyclestreets.net mapping on their sites). We engage with community groups and Sustrans (whatever you may feel about Sustrans routes, we have found it is best to work together and present a united cyclists face to the authorities). We engage with Gatwick Airport regarding routes, mapping, access, etc. We engage with NHS trusts, etc, and so on.

Anything related to cycling is ‘in our remit’ and we can use our network of contacts to speak up for cyclists.

This is not the only way to get cycling activity moving. We do not claim it to be necessarily the best, but we have found that this is a good way to get experienced cyclists involved in all elements of improving cycling, by understanding how the machinery of local government works and seeking to influence it at all stages in a positive and productive way.

A key message would be to recognise that the people you will work with are just that – people – and usually, even if not enthusiastic for cycling or even knowledge of cyclists' needs, they wish to deliver support for cycling. So an overall approach of encouragement and positive feedback should be adopted, as people soon get fed up with cyclists who moan about everything all the time! Make comments constructive, suggest that delivering your comment will make their lives easier, and you will get good results! The very best of luck in your cycle campaigning.