An inspirational 'Day of Women and Bikes'

An inspirational 'Day of Women and Bikes'

Women who love cycling gathered in Oxford for a Day of Women and Bikes. The event was organised by the Broken Spoke Bike Co-op and was part of the Oxford International Women's Festival. Cycling UK's Victoria Hazael went along to hear the inspiring speakers.

As a woman who has worked in cycling for almost a decade, this event was just what I needed. It was a so much more than a get together of amazing and inspiring women who all love bikes. There was a whole range of speakers from a variety of cycling disciplines, from touring adventurer Emily Chappell to elite mountain biker Maxine Filby, and panels that discussed women in competitive cycling and women in the bike industry. It was a chance to ask questions, to get to know other women who love bikes and to learn a lot about the history of female cyclists.

Cheryl Reid, who oversaw a massive increase in female membership at her club last year, said: " We need to make it as easy as possible for women to have access to cycling, the more women out doing it, the more visible women are in cycling. That's why we are seeing a snowball effect".

Maxine Filby, who only came back to cycling six years ago, explained how she hadn't ridden at all since she was 15. She bought a mountain bike in her late 20s and just loved riding it. She spoke passionately about the lack of support female riders receive and how that needed to change. On the wider issue of why more men cycle, she said the problem was that "girls just are not encouraged to play on bikes, do wheelies and push themselves."

Jan Philips, who is in her early sixties, talked of the sexual harassment she and other female riders experienced and of how women of her generation were trailblazers who fought so it would be easier for other women. 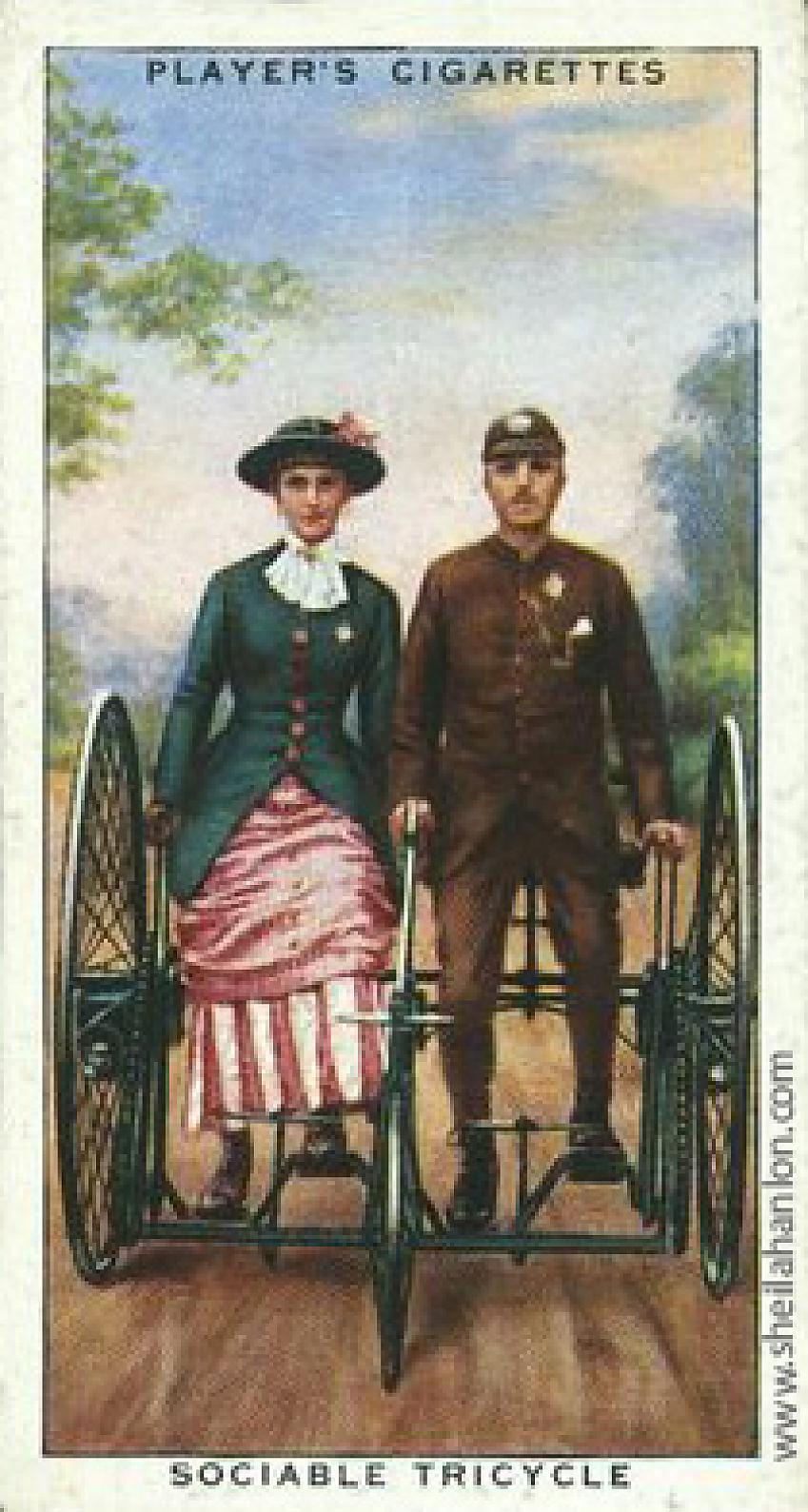 Using examples from the Cycling UK cycling archive at Warwick University, Sheila demonstrated how attitudes towards what female cyclists should wear so as to appear modest and decent made it difficult for them to cycle. Many female riders were injured after their long skirts got caught in the wheels.

She explained how in Victorian times women in trousers were a threat to gender order. She also shared a rare a colour image of the first female member of Cycling UK, Mrs W D Welford (right).

Women in the bike industry

There are just two female frame builders working in the UK and it is just shocking that they are asked regularly 'Who does your welding for you?'. One thing is clear, the cycle industry has long been a man’s world, but that is changing.

Caren Hartley is the award-winning frame builder behind Hartley Cycles and Liz Colebrook, who is the bespoke bike builder and fitter behind Beaumont Bicycles, discussed why there are so few frame builders in the UK.

Liz reminisced that she was only offered to study needlework and home economics at school, when she would have loved to learn metalwork and woodwork. She also spoke movingly of her first trial at a local bike shop when she was a teenager. The shop was not supportive and told her that she was "too slow and incompetent"  so not to come back again - she is sure a male bike mechanic would have been treated differently.

​Jenni Gwiazdowski, the founder of DIY workshop London Bike Kitchen and Eleanor Smith, mechanic and founder of Beryl’s Night and Broken Spoke Co-op, discussed how lonely it can be as a women running your own cycle business and how they encourage each other and share best practice.

They also explained that female-friendly cycle mechanic nights have been incredibly popular, as women of all ages want to learn how to fix their bikes as they are often not taught these things when they are younger. It was clear that seeing female bike mechanics fixing and teaching gave other women the confidence to learn mechanical skills themselves.

After a woman said to Eleanor "I only cycle as far as I can walk home", Eleanor became determined to set up Beryl's Nights (named in honour of Beryl Burton). She says: "That is why we do it - to give women confidence and freedom".

This really resonated with me, as although I have been cycling regularly since I was a little girl, my Dad always mended my bike and I never learnt how to do it myself until I was stuck with a puncture and there was no one to do it for me - I was 29! 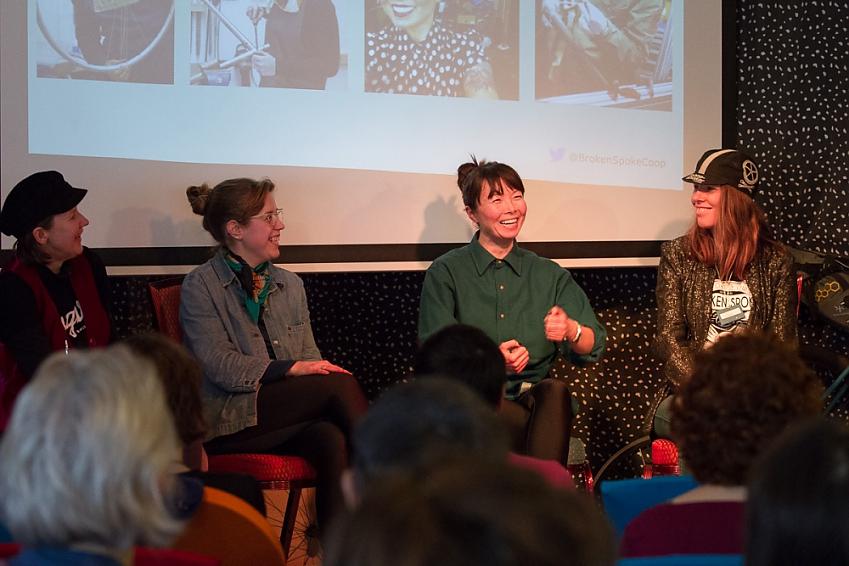 The final session was with Emily Chappell, an extreme adventure cyclist and award-winning blogger.

Emily spoke about her cycle tour from the UK to Japan. She had been working as a cycle courier in London when she realised she was cycling 1000 miles a month, so, rather than going round and round the city, she decided to cycle to Asia.

Emily said: "I was young, fit, strong and had no commitments, so I thought I'd go on an adventure". The talk was a mixture of wit, charm, beautiful photos and stories of meeting strangers and making friends.

Emily also signed copies of her new book 'What Goes Around' on life as a cycle courier turned cycling adventurer.

After the event, I walked through Oxford city centre at dusk and, as I noticed the many people cycling in this city, I felt full of hope that women all over the UK would be inspired to ride a bike.

I remembered Liz Colebrook's words from earlier: "We need to teach our daughters, friends, sisters and mums to cycle with confidence and teach them how to fix their own bikes, so that they will have the full freedom that cycling offers."

Eleanor Smith View
Cycling UK continues to support the UK to cycle
This remains true during this difficult period with the ongoing threat of coronavirus Covid-19
Read our latest advice on cycling
Join Cycling UK to help us change lives and communities through cycling
Membership gives you peace of mind insurance, discounts in cycle shops, rides & routes
Join now