Is there any sign of the cycling revolution? Results of England's travel survey 2017

National Travel Survey 2017 - any sign of a cycling revolution?

Is there any sign of the cycling revolution? Results of England's travel survey 2017

England's not seeing more cycle trips, but people do seem to be putting in more bike miles. But is cycling anywhere near becoming a natural choice for shorter journeys? Cycling UK’s Cherry Allan looks at the phenomenal (or maybe not so phenomenal) results of the latest National Travel Survey.

Yearly official traffic counts tell us many useful things. Thanks to them, we know that 3.27 billion vehicle miles were cycled in 2017 (GB), around 3% more than in 2016.

What counts don’t and can’t do, though, is interrogate cyclists on where they’re going and why, how frequent their trips are, or how far. Demographics, of course, are completely beyond them too.

This is the job of the Department for Transport's (DfT) annual National Travel Survey (NTS).

Based on diaries and interviews from around 16,000 individuals in all age groups in 7,000 households in England, it digs into travel habits more intelligently than traffic counts can possibly do – and the results from 2017 are just out.

I might as well paste this from my blog on NTS 2016: in terms of trips by private rather than public transport, last year, “2% of trips and 1% of total mileage were cycled.” Car/van travel remain the population's top choice, at two-thirds of trips and the vast majority of total mileage. It’s been much the same for years.

Around two-fifths of people aged 5+ (42%) own or have access to a bicycle.

These figures have hardly changed since 2003.

Number of cycle trips – little change, but back up to 2015 numbers

Number of cycle stages – little change, but back up to 2015 numbers

A 'stage', as described by the Government, is “when there is a change in the form of transport”. It’s a good unit to choose as it means people can report the cycling sections of longer trips, e.g. riding to the station to catch a train. When people are asked about trips rather than stages, they can only mention the ‘main mode’, which would probably be the train in this case. Focussing on trips, therefore, misses out on contributory stages by bike (a shame).

Unfortunately, if the latest figures for cycle stages per person per year are anything to go by, it's not looking too rosy yet for the doubling objective:

Note: The Government's target, set by the DfT's Cycling and Walking Investment Strategy (CWIS), is based on the total annual number of stages made by the whole of England’s population, rather than per person per year. This is a bit of a fiddle: thanks to population growth, the total number of cycling stages is set to rise in any event, regardless of whether there is any increase in the number or proportion of trips cycled per person.

The target also includes the growth of cycling in London – already 62% up in 2015/16 over 2005/6. This ongoing success (and major investment) is way ahead of most of the rest of England, but it's the authorities in London, not the DfT, who can legitimately claim credit for it.

As such, we’ve calculated that the 'doubling' target (i.e. a 100% increase) = only a 74% increase in real terms for people outside London.

We think measuring success as a proportion of cycle trips/stages by all kinds of transport would be a better indication.

Now, this seems very much like something about which to write home.

But this figure is based on the average miles travelled by everyone surveyed, so includes people who don’t cycle.

What about cyclists alone, then? Helpfully, the NTS, drills far enough to find out.

Have car drivers been totting up more miles per year too? No. Actually, the average distance they travel has gone down by 11% since 2002.

Let’s pause to speculate what might lie behind all these extra bike miles. Are people making longer cycle commutes, or taking in more miles for leisure?

Well, yes to both, but it’s leisure that’s booming. Categorised as “Visit friends at home and elsewhere, entertainment, sport, holiday and day trip”, the average distance ridden for these purposes was only 13 miles in 2002, 20 in 2011, and 27 miles in 2017. 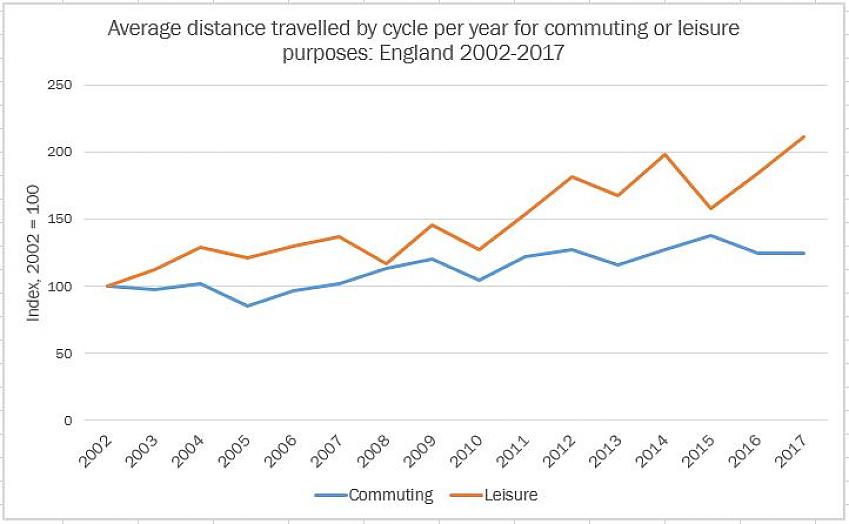 The figures can tell us this much, but not why people are taking longer leisure trips. Better machines? Desire for exercise? E-bikes? Challenging events? Or simply for fun?

Cycle trips, of course, do have other purposes, but leisure and commuting are by far the most commonly cited – usually accounting for around seven out of ten outings by bike each year (36% and 34% of them respectively in 2017).

Shopping, business, personal business and education make up the rest. 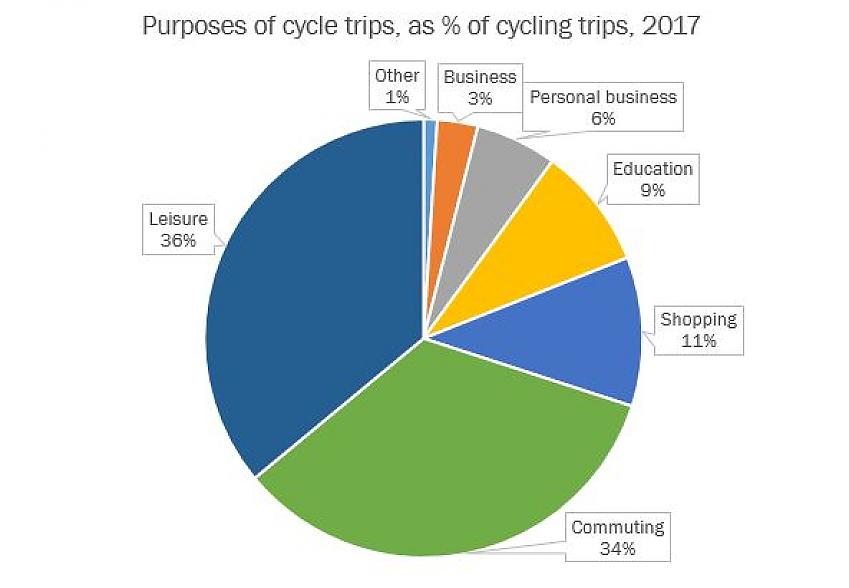 Talking about education, are more children cycling to school? No, is the short answer.

Still only around 2% of trips to and from school are by cycle. One comfort for physical activity, though, is that walking still beats car use (44% to 35%).

A check on the difference between primary and secondary schools shows that: for children aged 5-10, a mere 1.8% still cycle-commute; and for secondary pupils (11-16), only 3.5%.

It’s unwise to read anything much into fluctuations in percentages as tiny as this, though, but clearly far more needs to be done to get children cycling and, no doubt, to stop their parents worrying about letting them.  (The Maindy Flyers, Geraint Thomas’s former cycling club when he was a youth, don’t seem to be affected by this problem).

Participation by gender - no change

By and large since 2002, people at the “highest real income” level make more cycle trips each year than those in the lowest. This is not always the case, though. Sometimes the two levels are even, although the difference in 2017 was the most extreme it’s been (22 to 13).

Also, other intervening income groups surge here and there, making it hard to make very much of these figures.

To summarise, we’re some way off cycling becoming, to quote CWIS, “… a normal part of everyday life, and the natural choice for shorter journeys”.

While the mileage people are accumulating by cycle has been growing considerably, and leisure riding is attracting more interest, the number of cycle trips/stages, and their share of journeys by all modes, isn’t showing much improvement.

There’s nothing to suggest that children who cycle to school are beating off the scrum for a slot in the cycle shed, or that girls and women are embracing cycling on anything like the scale that males do (which isn’t any great shakes in the first place).

And that’s almost undoubtedly because they, or the people who care about them, think cycling’s too scary: according to the British Social Attitudes Survey, for the last five years over two thirds of British adults have agreed that “It is too dangerous for me to cycle on the roads”.

Cycling UK thinks that solving this isn’t as demanding or complicated as officials might believe. Hence our Cycle safety: make it simple campaign.

And now we’re over half a year into 2018. As we reflect on 2017, maybe there's a cycling revolution going on for the next issue of NTS to celebrate?

The NTS used to cover the whole of Great Britain, but has been confined to England since 2013.

Almost half of women would give up TV, the gym or the World Cup over cycling View