A10 cycle ride points out room for improvement

A10 cycle ride points out room for improvement

The A10 ride took place on May 13, a perfect spring day. It was organised by Mike Stapleton, and was a huge success - far exceeding expectations. He writes about how it achieved its aim, to show the need for better off-road paths and crossing points.

Lots of support at all levels

More than 50 riders gathered at Trumpington and at Royston, and were supported by several senior politicians (including Oliver Heald MP and Sir Graham Bright), Patrick Joyce from the Council, local businesses, shops, the Cambridge Triathlon Club, a photographer from the Cambridge News and two TV crews from Anglia and BBC East. 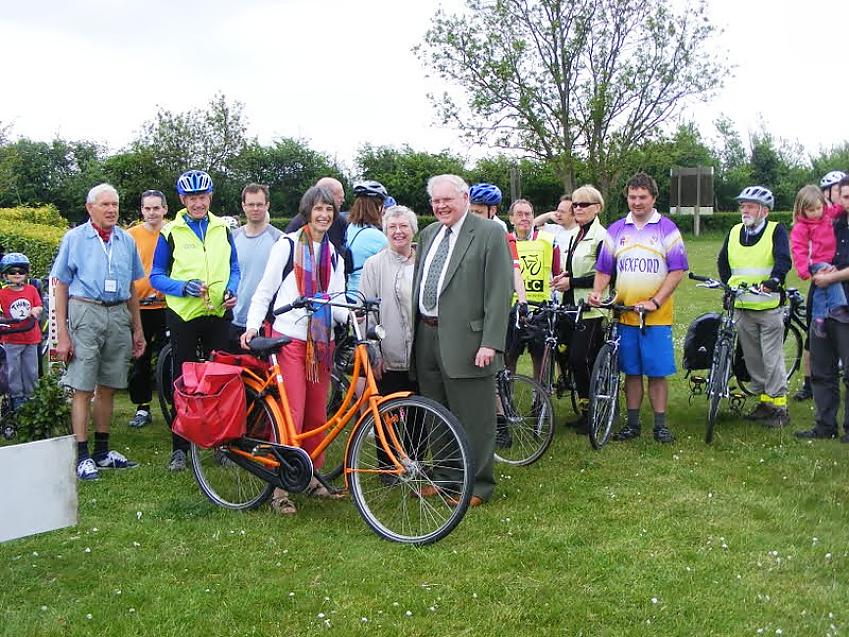 Susan van der Ven, the local County Councillor who dreamed up the campaign, rode the route from Trumpington, joined by several cycling groups including the Cambridge Cycling Campaign, CTC, the Thriplow Riders and Ashwell Cycling Club. MPs and ministers who were unable to make it sent their apologies.

Sustrans are now initiating a study on how to move forward, and Cambridgeshire is trying to obtain grants for the Foxton area. 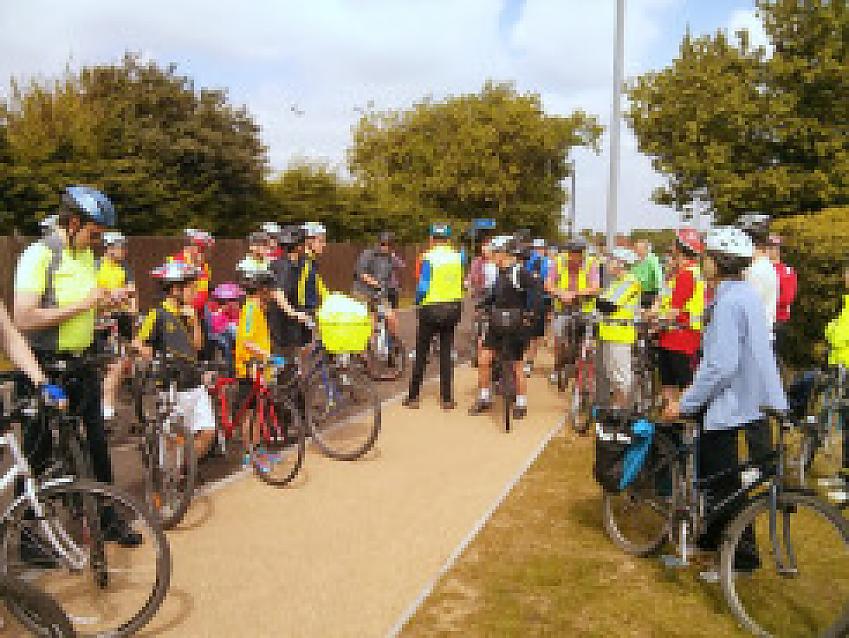 The ride started at the Trumpington Road Park and Ride site, which is two miles south of Cambridge, and has first class cycle links into the city.

The riders set off across the fields which are going to form the huge Trumpington Meadows Amenity Site on either side of the M11, linked by its own amenity bridge. The site manager for the new development waved us on our way!

The area beyond the M11 stretches down to the river, which is about ¾ mile away and full of wildlife. There is also an area where Coprolite was mined in the late 19th century.

After cycling through this, we returned to the A10 through a handy hole in the fence, and pressed on through Harston. This posed a significant problem - the path is too narrow and has a whole series of entrances and an awful sight-line and overhanging hedges that narrow the path.

At the end of the village, there is a very narrow path directly beside the A10 with built-in lamp posts.  From here to Foxton Crossing, the path is fairly good since volunteers have cut back the brambles.

At the crossing, we diverted via the Barrington Road over the railway on the pedestrian crossing; unusually, this was working properly!

The path on towards the Dunsbridge Turnpike is fairly good, as long as you avoid the overhanging mile post. Just before the Fowlmere Road, however, the path narrows and the surface is terrible and the path stays narrow and uneven up to the Weavers Shed. We had decided to cross at this point because local riders had advised us that the crossing at Frog End was dangerous, and usually had an incident every fortnight.

Sight-lines at the Weavers Shed are very good and we stationed a marshal on the far side. In the event the crossing went without a problem. One motorist seeing a large crowd waiting stopped the traffic so that we could cross.

The ride continued to Phillimore Garden Centre where tea, squash and cakes were provided by the café and dispensed by our volunteers. We used 100 cups so we assume there were more than 100 riders and supporters.

The Police Commissioner for Cambridgeshire was in attendance, and Susan van de Ven gave an interview to the TV crew. The riders from the Royston Group arrived shortly after those from Trumpington. 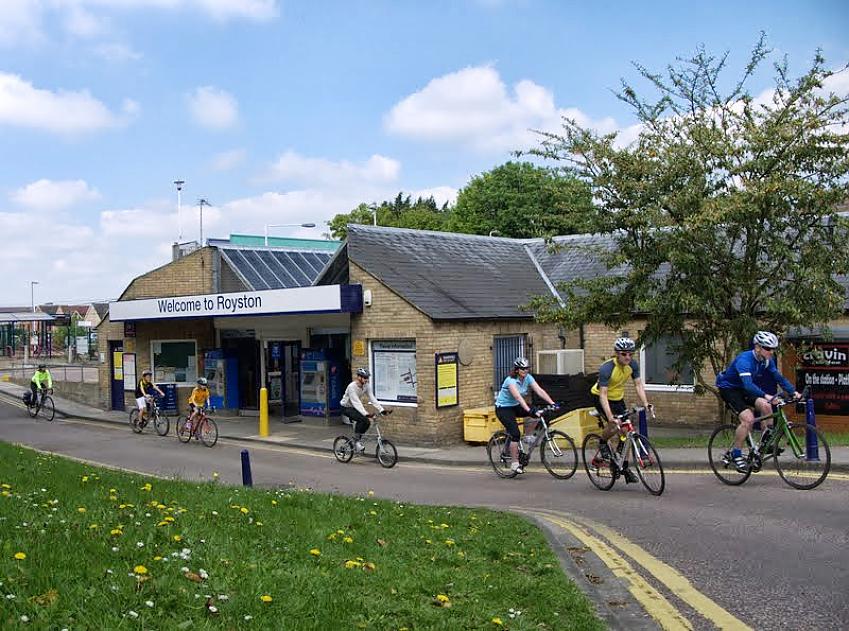 The Royston Ride started from the Station,  waved off by local MP Oliver Heald.

The initial part of the ride was along the new cycle tracks in the Burns Road Estate and led to the new tunnel under the Railway at Combes Hole.

Then it swung north beside the A10 to the bypass formed by the dual carriageway A505. The crossing, on grade at this point, is awful as the sight-lines are bad and traffic is moving very fast. It took a significant time to make the crossing, but incidents were avoided.

The day was a great success, and cycling was highlighted as an efficient and fun way to travel."

The path from here to Melbourn has several downhill sections that are very narrow and very bumpy. The crossing at Greenlow Kennels is on a very fast section of road but the sight-lines are relatively good.

Once again a motorist stopped the traffic here to let the riders cross.  The road through Melbourn was no problem: it is fairly wide and the traffic expects to have to slow down, although a County Council offer of a 20 mph speed limit was objected to by a local pressure group some years ago. 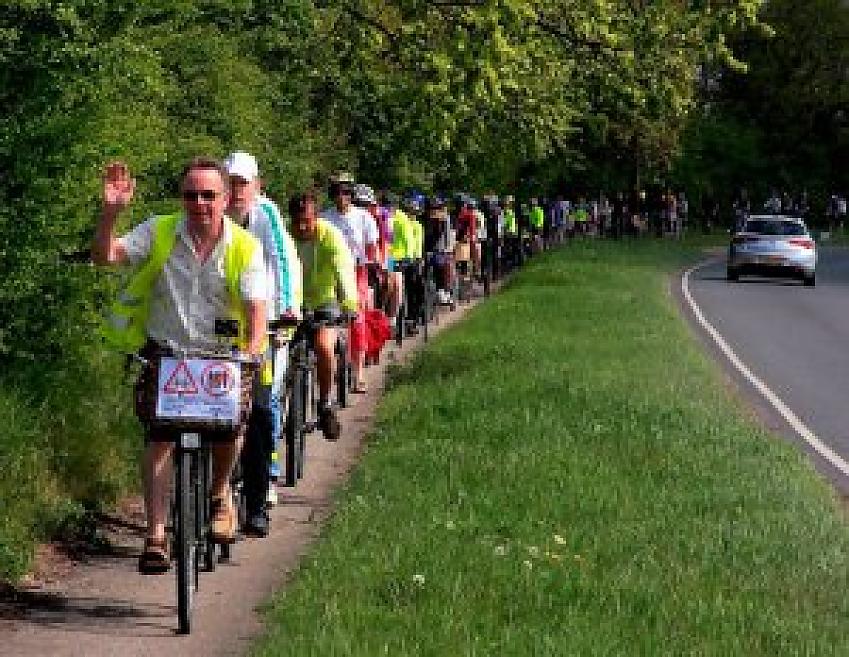