Yesterday (15th June 2017) was the UK's first ever Clean Air Day. Co-ordinated by Global Action Plan, it was a chance for pupils and teachers, employers and employees to come together and take action to reduce their emissions. A perfect activity for Bike Week!

It also marked the end of the public consultation on the latest version of the Government's Air Quality Strategy. Very timely.

I say "The latest version" because the Government has twice before attempted to get an Air Quality Strategy adopted. Both times though, it fell foul of legal challenges by activist lawyers ClientEarth.

The courts ruled both in April 2015, then again in November 2016, that the Government's plans fell far short of what is needed to protect human health. Ruling on the second case, Justice Garnham agreed with ClientEarth that former Environment Secretary Andrea Leadsom had failed to take measures that would bring the UK into compliance with the law “as soon as possible”. He also agreed that ministers were aware that their pollution modelling was over-optimistic.

Air pollution is a massive issue, and one the public is increasingly concerned about. The World Health Organisation (WHO) says air pollution is a leading cause of cancer, especially lung cancer. Estimates vary as to the number of people it kills annually in the UK, from around 29,000 to 40,000 people. However, road transport accounts for about half of all pollution-related deaths in the 34 Organisation for Economic Co-operation and Development​ (OECD) countries. UK Government figures show it accounts for about a third of the UK's nitrogen oxide emissions and around 13-14% of particulate matter. What's clear is that it has a huge human cost in lives destroyed and shortened by ill-health, not to mention the economic costs to employers and the NHS.

Yet despite this imperative to act, the Department for the Environment, Food and Rural Affairs (DEFRA) went to court as soon as the recent general election was called, seeking to extend the deadline for the draft Strategy till the Autumn. The court flatly rejected this. It allowed publication to be delayed till after the local elections, but no further. Hence the latest version came out on 5th May.

Cycling UK and its partners in the Healthy Air Campaign feel this latest version is still woefully inadequate. ClientEarth, a key member of the campaign, has already launched a third legal challenge, without even waiting for the consultation to conclude. ClientEarth CEO James Thornton says: "The government’s plans and consultation do not match what its own evidence says needs to happen", adding that, "The law requires the final plan to bring air pollution down to legal levels in the shortest time possible." He says ClientEarth has identified "Major Flaws" which make it impossible to do this.

In particular, the draft Strategy seems to got out of its way to make it difficult for local authorities to implement road user charging to help deter polluting vehicles as part of their Clean Air Zones (CAZ) plans and to fund healthy and sustainable transport alternatives. It's worth quoting paragraph 25 of the consultation document:

"The Government believes that charging zones should only be used where local authorities fail to identify equally effective alternatives. If local authorities do conclude that charging is the only way to achieve compliance in the shortest possible time, they will be required to set out the detail of where and when charges would apply, and the vehicle types to which they would apply. They will also be required to engage with local people and fully assess the impact of such an approach and how it could be mitigated. In all cases, charging zones would apply only to older, higher-polluting models of the vehicle types, so as to have a targeted impact on pollution. Any revenues collected by local authorities will be reinvested to support local transport policies, which could cover public health projects or better town and city planning, promoting cleaner air."

Far from helping local authorities to meet air quality standards "as quickly as possible", this is simply tying their hands in knots.

Now, I agree entirely with the last sentence. For one thing, these revenues could provide an excellent way for councils to fund the Local Cycling and Walking Infrastructure Plans (LCWIPs) they are being asked to draw up as part of the Government's sorely under-funded Cycling and Walking Investment Strategy.

Yet that's exactly why it is so irrational that the Government is impeding local authorities from implementing road user charging in the first place. Even DEFRA's own technical appendix accompanying the draft Strategy identifies charging as the most effective way to tackle pollution (e.g. see the appendix p54). Yet they somehow expect councils to come up with policy-packages to reduce pollution without road user charging that are more effective than any policy-package including charging. Even more absurdly, they then expect councils to produce justifications any failure to come up solutions to their air quality problems that work better without charging than with it. Far from helping local authorities to meet air quality standards "as quickly as possible", this is simply tying their hands in knots.

No wonder ClientEarth has launched yet another legal challenge.

What Cycling UK and its allies are calling for

The key point we want to see is encouragement and support (rather than obstruction and hindrance) for local authorities wishing to introduce charging as part of their CAZ plans. This would not only enable them to deter the use of the dirtiest vehicles, but would also help them fund healthy and sustainable transport measures, including high-quality local cycling networks and the positive promotion of cycling for people of all ages and abilities. CAZ revenues could be used to provide cycle training for young and older people alike, as well as community-club programmes for people of all abilities and demographic groups.

Specifically, we want charging CAZs to include the development and implementation of an Local Cycling and Walking Infrastructure Plans, in accordance with the excellent guidance on LCWIPs recently issued by the Department for Transport. LCWIPs involve the planning of comprehensive local cycling and walking networks, and the identification and implementation of a prioritised list of schemes to help develop these networks. These networks and measures should then be embedded within other local transport and land-use policies and programmes, e.g. local transport plans, new developments and local highway maintenance programmes.

Scrappage scheme incentives should be available not only to support the purchase of the cleanest new cars, vans, buses and lorries, but also for pedal cycles, including e-bikes.

The vehicles eligible for scrappage scheme incentives should include not only the dirtiest cars but also diesel buses and lorries. As well as having ultra-low emissions standards, new lorries should be required to have safe “direct vision” cabs in order to attract scrappage scheme purchase incentives. That way, the scheme would not only save lives through reduced pollution but also by helping to remove lorries with lethal ‘blind-spots’.

Scrappage scheme incentives should be available not only to support the purchase of the cleanest new cars, vans, buses and lorries, but also for pedal cycles, including electrically assisted pedal cycles (or “e-bikes”) and cargo-bikes (which can also be electrically assisted). Increased incentives should be available for people with disabilities, not least enabling them to purchase non-standard e-bikes that can be used as mobility aids.

One point we have emphasised in our response though is the need to tackle pollution in ways that also deliver wider benefits wider health, safety and economic benefits. A 2009 report by the Government's Cabinet Office on the costs of transport in English urban areas found that, in round numbers, these came to around £40bn, with the costs of air pollution, physical inactivity, congestion and road danger all coming in at around £10bn each. 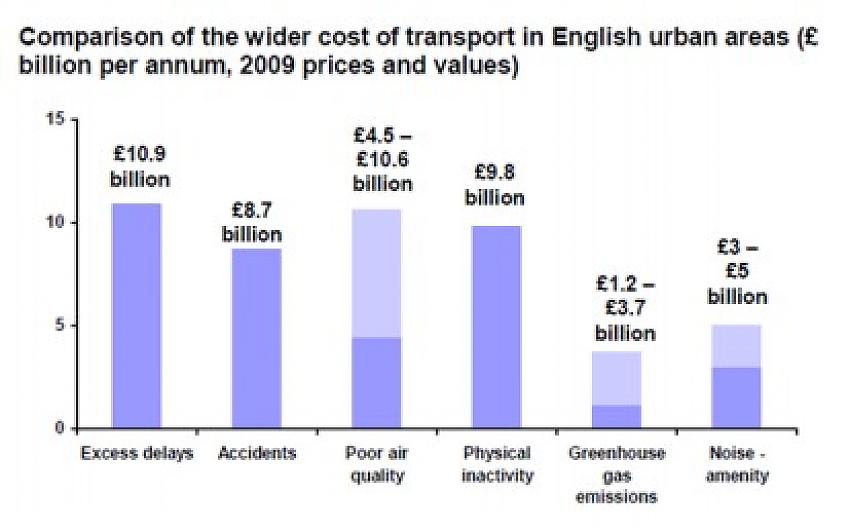 Hence, important as it is to replace dirty diesel vehicles with cleaner, electric-powered vehicles, that's not the whole answer. If that's all we do, we'll be missing a huge opportunity to reduce road danger, congestion and physical inactivity at the same time.

So, we now have a new Environment Secretary. However Michael Gove's appointment was not particularly well received by other environment groups! They have recalled his abortive efforts when he was Education Secretary to remove climate change from the school curriculum. More recently, he has even aired the tabloid-esque suggestion that cycle tracks cause (rather than help tackle) pollution (see Q1361), and his wife - columnist Sarah Vine - has vented her spleen in the Daily Mail about the lycra-clad "Cycling Stasi". He has also aired the view that some EU environmental rules inhibit economic growth - an ominous sign, given that he is now responsible for air quality standards and other environmental regulations in the post-Brexit era.

Still, since his appointment as Environment Secretary he has made the right noises about tackling climate change, saying Donald Trump had been wrong to pull out of the Paris Accord. Time will tell how he responds to the political hot-potato of air pollution.

See Cycling UK's consultation submission, along with those of the British Lung Foundation and an outline response from Friends of the Earth. We'll add links to other responses as we receive them.