To date 50% of candidates in Northern Ireland elections have declared their interest in cycling
By NI Greenways
Friday, 29 April 2016

The remarkable recent rise in the popularity, profile and rates of cycling in Northern Ireland is being recognised by a political class seemingly undergoing a culture shift. Local campaigner, NI Greenways, gives a bit more background on what is happening this Election Cycle 2016.

The Election Cycle campaign run by Cycling UK, Sustrans Northern Ireland and NI Greenways has gained a ringing endorsement for cycling investment, greenways and active travel legislation with less than a week to go in the Northern Ireland Assembly Elections.

The President of Cycling UK, Channel Four News presenter Jon Snow, sent an email to the candidates standing for election to Northern Ireland’s devolved Assembly at Stormont. To date 50% of the 276 candidates have provided their views on the three policy priorities:

The positive response has been both unexpected and overwhelming. Candidates back all three priorities by over 90%. 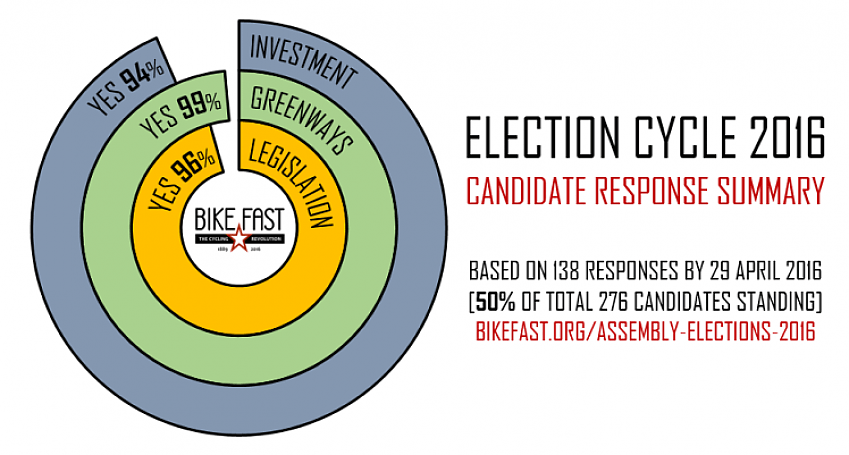 Cycling has never been particularly high on the political agenda in Northern Ireland. Over the last 20 years of relatively ‘normal’ politics, the three general priority areas of Election Cycle have received very little attention at election time. Through the hard work on the ground of Sustrans NI, Cycling UK and independent campaigners, political recognition of the importance of cycling has spiked in 2016 (see below chart). 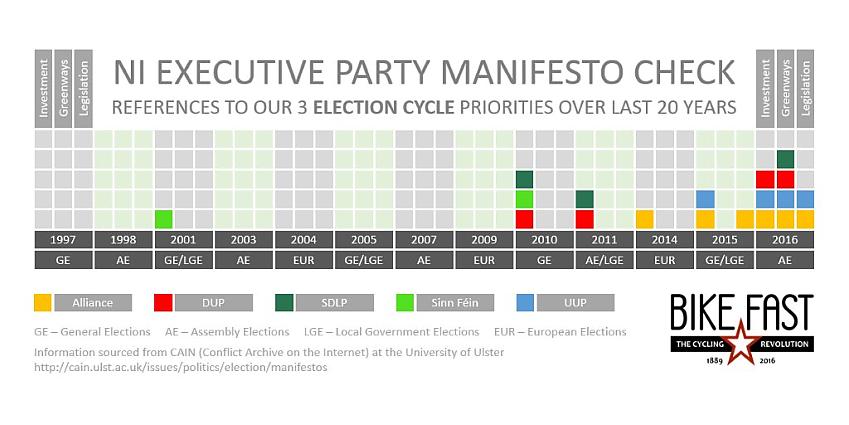 The backdrop to this is a fledgling Cycling Revolution – a term coined by former Regional Development Minister Danny Kennedy. This could easily have been hollow rhetoric but was matched by action within government on active travel projects and promotion. The impact is especially evident in Belfast where commuter cycling share has risen from 1% to 5% in just over a decade.

The progress has been gathering pace - over the last Assembly term we’ve hosted the international Changing Gear Conference on cycling; a Cycling Policy Unit has been set up within our Infrastructure Department to devise our 25-year Bicycle Strategy for Northern Ireland with urban bicycle network and rural greenway network plans; an All Party Group on Cycling was formed at Stormont to help bridge the gap between politicians and those working on cycling issues in wider society; even the hosting of the Giro d’Italia Grande Partenza 2014 and the subsequent Gran Fondo events have piqued the interest of politicians; cultural backing for cycling has also grown in the form of The Fréd Festival and the first ever Ciclovia Belfast event last year.

But most importantly cycling investment levels were raised within the NI Executive budget - from a measly average of 58p per head of population between 2007-08 and 2011-12 to £4 per head in 2014-15. This provided scope for a series of active travel demonstration projects like greenway improvements in Craigavon and perhaps the most transformative cycling investment ever in Northern Ireland, the public hire Belfast Bikes system. We're still a long way from funding of at least £10 per head, but it's a step in the right direction.

Celebrating its first birthday this week, the Belfast Bikes system has 330 bicycles across 33 stations and over 6,000 subscribers have made 191,000 journeys. It’s an astonishing performance in what was considered an unfriendly urban environment for cycling, and in terms of usage punches far above the bigger system in Glasgow.

And right now on the streets of Belfast the first dedicated, protected cycleways devised under the NI Bicycle Strategy are being constructed, giving us a taste of what could come if political backing is secured in the next Assembly term.

With the rise of cycling visible on the streets and roads around Northern Ireland, Cycling UK, Sustrans Northern Ireland and NI Greenways have been busy canvassing opinions on cycling of the 276 candidates standing for election, and presenting those views for each constituency.

The aim is to help to inform the public on the aims of candidates standing in their area, and also to positively engage with future MLAs on these important issues as they will shape the first 5 years of the 25-year Bicycle Strategy for Northern Ireland. 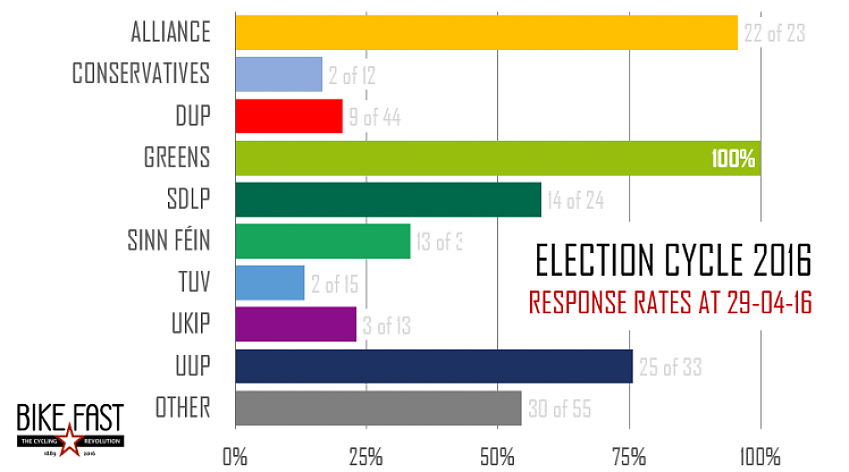 We’re thrilled with the 50% response rate, the strong endorsement of the aims and the possibility for real change this opens up after the election.

WHAT THE PARTY MANIFESTOS SAY

The five parties who’ve formed the Northern Ireland Executive within government since devolution have made various commitments to cycling in their 2016 manifestos:

The Alliance manifesto states that "safe environments for cyclists and pedestrians should be promoted" as a public health intervention, and recognises that Northern Ireland isn't doing enough to enable short journeys by bicycle as "the main problem with this is safety and, therefore, the need to rebalance the amount of cycling provision we have on our roads." The manifesto goes on to explicitly back all three Election Cycle priorities and more.

The DUP manifesto states the party is "committed to developing a Greenway Network across Northern Ireland that provides traffic free space for walkers and cyclists" and sees the funding and delivery being developed in partnership between central government and our councils.

The SDLP manifesto similarly focuses on the greenways aspect, stating that "greenway development will help build sustainable tourism such as walking, cycling and geotourism" and "will deliver jobs in construction, hospitality and tourism."

The Sinn Féin manifesto only states they intend to "invest £6 billion to improve roads, transport and other infrastructure" with no specific references to cycling, greenways or active travel legislation.

The Ulster Unionist Party manifesto says they see "cycling as a feasible mode of transport for everyday journeys" but to make it possible for everyone there is a need "to create the conditions that make this viable and safe. The next Executive must continue to develop the infrastructure that will nurture a culture of cycling." Like the Alliance party they explicitly back all 3 Election Cycle aims.

It’s notable that all seven party leaders standing for election have taken the time to respond to the Election Cycle survey – all with degrees of positive backing.

You can see what Northern Ireland candidates views on cycling are on the Bikefast website.