Tucked away in Stoke Park Woods in Bishopstoke is a special kind of community bike project. Led by Gary Kingsbury and Keith Dillon, that special place is called Bike Park Bishopstoke (BPB) and it is full of trails and jumps that have been totally constructed by volunteers on Forestry Commission land. Plans are to open it to the local community in late summer 2017.

The aim of the new and exciting local development is to create a space where people of all ages and abilities can go and be involved in an activity that they are passionate about, using a community facility that is free and fun.

Ride Leaders Gary and Keith have had plenty of experience working with children and young people: Keith is a social worker for Southampton City Council, while Gary has been involved in youth work for over 15 years. More specifically, Gary has also worked on several cycling projects involving young people, while also running National Standard cycle training in schools and leading rides for various organisations.

Gary says of BPB: “I came into the project after it had been going for a few years. I wanted to help build a spot that would not be at risk of being knocked down because it was unofficial as soon as it was built.”

However, the last few years have not been without their challenges and there has been a real effort to get the project up and running. The main obstacle was convincing the Forestry Commission of the huge impact of the project, while assuaging the organisation’s fear of the risk involved and potential liability. 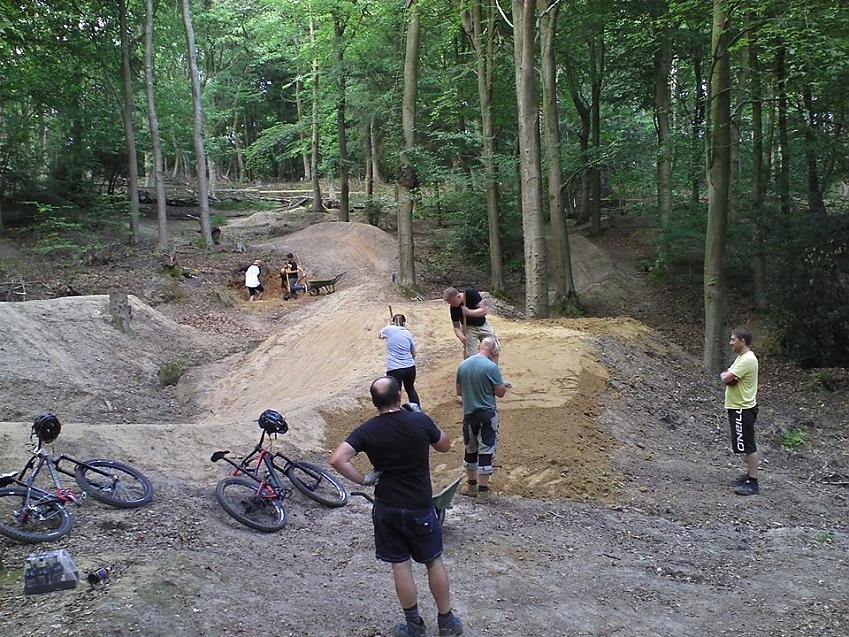 Above: one of the trails starts to take shape

BPB believes that participating in activities with a positive risk-taking factor is good for people, as they learn to manage and understand risk and their own capabilities. If people go out of their comfort zones, it helps to develop a 'can do' attitude, which is transferable into other aspects of their lives.

Through support from Cycling UK and other funders Eastleigh Borough Council, Radian Housing, and Asda, BPB was able to buy equipment to get the project underway. There were also in-kind donations from volunteers.

Cycling UK funded trail checking and maintenance training that proved useful to the group, who now use the procedures outlined in the training. Several young volunteers also attended the training, encouraging the younger generation to take ownership of the park and learn how to build responsibly.

Hopefully it will engage young people and families, giving them a sense of belonging in their community, an understanding of nature and how wonderful our countryside is.

The group hopes that the park will reduce antisocial behaviour and crime by offering an affordable, challenging activity for local young people, children and families. They believe participation will be fun, raise self-esteem and confidence, and promotes better health both mentally and physically. Both Gary and Keith have noticed that these changes have been taking place already in the volunteers who’ve helped to shape the trails and test ride the resulting jumps and turns.

Keith says: "Hopefully it will engage young people and families, giving them a sense of belonging in their community, an understanding of nature and how wonderful our countryside is."

Their expertise is useful for other groups in Southampton. For example, Monty’s Bike Hub, another Cycling UK-supported project, led a ride consisting of young people over to Thornhill, an area with a high level of deprivation. In Thornhill, Gary used to be involved in a project revolving around Dumbleton Bike Park, a pump track built on a formerly derelict playground.

Unfortunately, Dumbleton Bike Park has fallen into disuse through a lack of people available to maintain it. Despite this, the young people from Monty’s Bike Hub had a great time using the track, supervised under Gary’s watchful eye. Monty’s hopes to bring the youngsters back to Dumbleton Park, not just to ride the track, but also to show them how to repair and build up the trails using Gary's and BPB’s experience.

It’s a great example of Cycling UK’s community cycling clubs working together to revive mountain biking skills and local resources in areas which lack community facilities for sport and fitness.

Winner: Best Community Project - Bike Park Bishopstoke View
You too can champion cycling in the UK
Give your support today to help Cycling UK’s charitable work tomorrow. We double every pound you give through other sources to help change lives and communities through cycling.
Volunteer now
Cycling UK continues to support the UK to cycle
This remains true during this difficult period with the ongoing threat of coronavirus Covid-19
Read our latest advice on cycling
Join Cycling UK to help us change lives and communities through cycling
Membership gives you peace of mind insurance, discounts in cycle shops, rides & routes
Join now