The Cycle Touring Festival: The perfect place for planning an adventure

The Cycle Touring Festival: The perfect place for planning an adventure

Last weekend (25 - 26 May) at Waddow Hall in Lancashire, hundreds of people gathered for the annual Cycle Touring Festival. Cycling UK’s Sam Jones rolled along to learn more and be inspired.

Jumping off the Caledonian Sleeper from Inverness to Preston at 4.30 in the morning,  I sleepily re-assembled my bike on the empty platform (Tip: if there’s no bike space on the Sleeper pack up your wheels into one of the Cycling UK Bike Bags and you’ve a handy light weight bike bag that can also double up as a ground sheet), I debated whether to wait for the first train to Clitheroe or enjoy the dawn and ride the twenty something miles to Waddow Hall.

The promise of sunshine on quiet lanes and trails was too much of a lure – and plus I thought I would have been a bit of a fraud if I had turned up to the Cycle Touring Festival without riding at least some of the way!

Such a thought though however is very much not in keeping with the festival.

While I met many who had spent years cycling to far flung places you’re more likely to see in a copy of National Geographic, there were also just as many who just enjoyed taking a bit of time off each year to see the world from two wheels.

I should have realised this before arriving, as Laura Moss (one of the co-founders of the festival along with her husband, Tim) had previously written, “We avoid tales of bravado and macho competitiveness. Cycle touring is accessible to anyone and we want to spread that message. It doesn’t have to be about going fast or far.

“It’s simply about exploring the world by bicycle. That might be for a weekend, or for several years. All are welcome at the festival.”

It’s simply about exploring the world by bicycle. That might be for a weekend, or for several years. All are welcome at the festival.

If you enjoy visiting places by bike – or even like the sound of it – then I can definitely confirm the Cycle Touring Festival is for you.

It’s non-commercial, which is a relief and a stark difference to many other cycle related shows. There’s a stall from Ghyllside Cycles which has some bikes to try and some touring related equipment for sale and then a bar in the evening, but with free feed and an endless supply of tea and coffee, you really don’t need to dip your hand into your pocket.

That means you can really focus on what is important – the talks and events on which the festival is based. Like all good festivals, whether it’s Glastonbury or the Hay Festival, you’re spoilt for choice which means at times you will miss out.

However, with that small intimate vibe you get from an event that hosts only 300 or so like-minded souls, you’ll soon bump into someone who can tell you about what you missed – or in fact find the speaker themselves to tell you all about it.

As you might expect, there are tales from the road and plenty of advice from experts based on their own experience on areas to appeal to the would-be tourer to the cycling veteran. From maintenance to trip planning, family-friendly sessions (so your children can get the touring bug early) to a frank discussion on how cycling is beneficial for your mental health – there such a wide range covered in a few days.

And in case you're a little overwhelmed with all the information you've absorbed during the day, you can always relax with a drink and enjoy the films of other folks' adventures, which was compared this year by keen bikepacker, Barry Godin.

For me, the definite highlight was hearing journalist Rebecca Lowe discuss her 11,000 mile solo journey through to the Middle East after the Arab Spring. Her talk disabused the common perception of the media of the region, and in a common theme throughout the weekend highlighted the kindness of strangers.

It’s often easy to feel lost in the crowd at a festival, especially if attending on your own. But just as you’ll encounter friends and fellowship on the road, it’s hard not to so at the festival too. 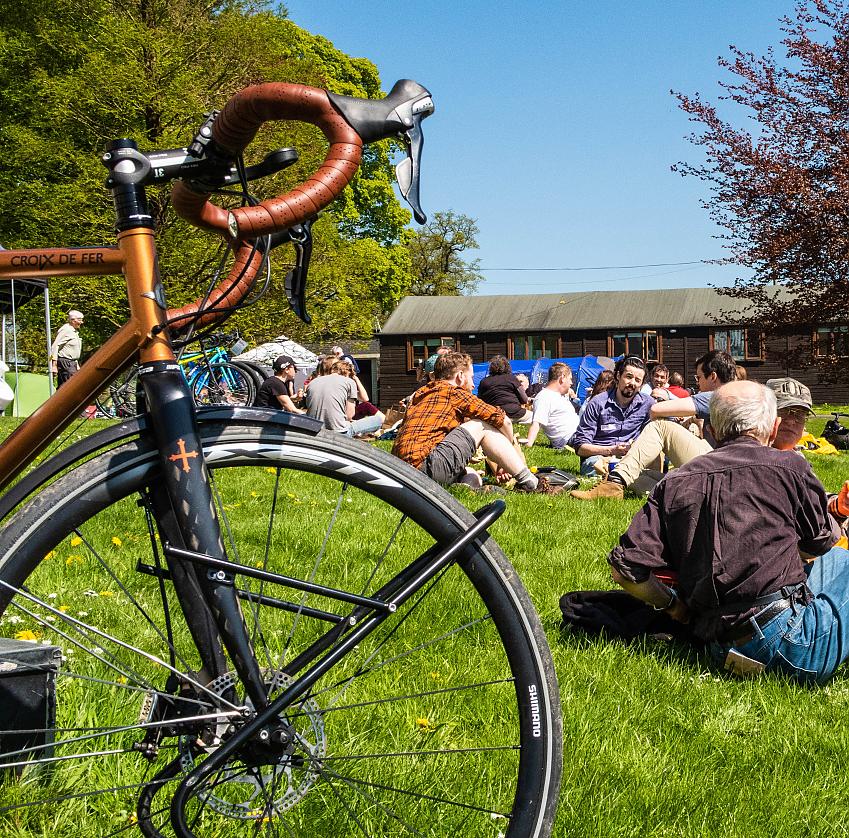 As someone who is always a bit nervous about heading off to events on my tod, I was immediately put at my ease. Straight off the bike and into breakfast, I bumped into Ashley and Matteo, a Canadian – French couple based in Scotland, who told me all of their grand plans a foot for Canadian and European adventures next year. I was only a little bit jealous…

Such meetings happened throughout the course of the weekend, and it’s the camaraderie that is surely the magical ingredient which keeps folk coming back year after year – and will hopefully see my try to return for the next if I can buy a ticket in time.

“The overriding theme every year is that cycle touring demonstrates that 99.9% of people are good people, which is a wonderfully life-affirming message,” Laura Moss said to me after the festival.

I couldn’t agree more but in the case of the Cycle Touring Festival I’d round it up to 100%.

C'est magnifique! How to enjoy the Semaine Federale View