What's happened to cycle commuting in England and Wales?

What's happened to cycle commuting in England and Wales?

The 2011 Census shows that - since 2001 - cycle commuting barely increased its share of all transport across the country, however, this overall figure conceals huge variations. 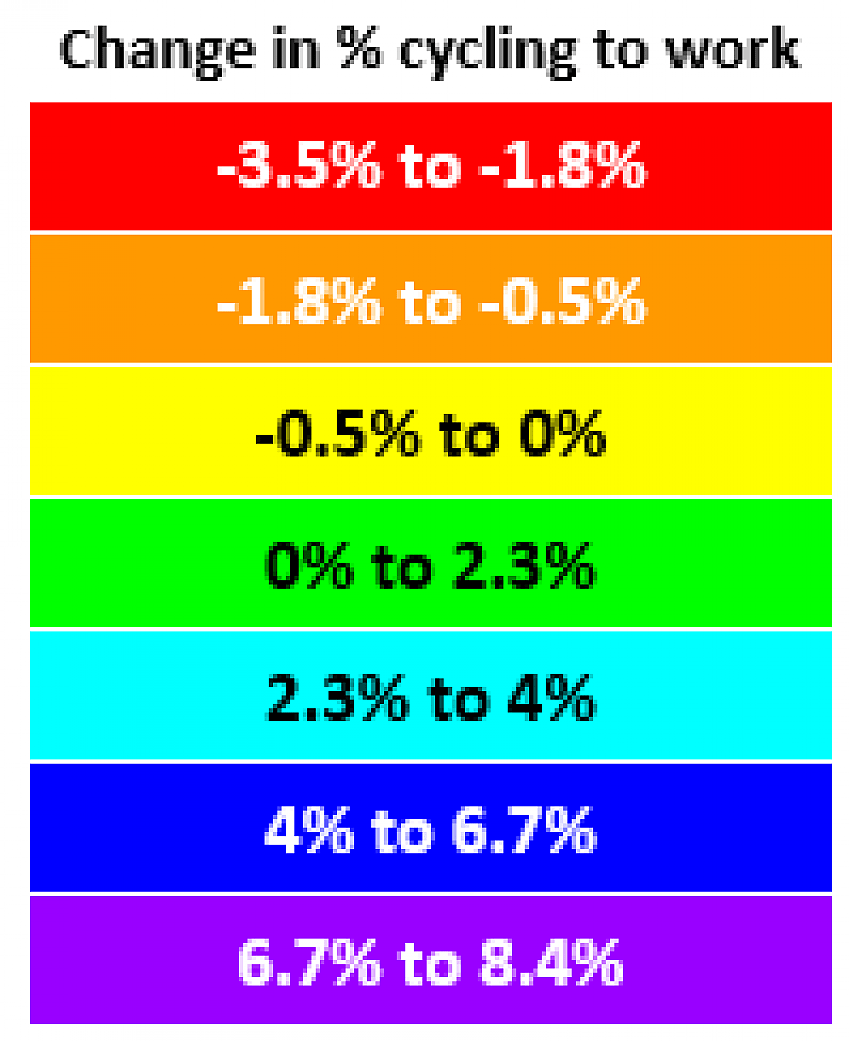 The following map shows the increase or decrease in cycling according to local authority area in England and Wales.

The legend to the left explains exactly which each shade indicates: increases in cycle commuting are marked as blues and greens, while static or declining share of cycling are yellow and red respectively.

Clicking on each area will show the change in cycle, public transport, and driving to work between the 2001 and 2011 Censuses. Note that commuting only makes up a fifth of all trips, so it doesn't tell the whole story about what is happening to mobility patterns in different parts of the country.

So what do these data tell us?

First - London has led the way: cycle commuting has shown substantial increase across the capital, but growth is concentrated in inner and central London. Hackney has not only seen the biggest increase in cycle use in the last ten years, it is now the local highway authority with the highest level of cycle commuting in the country (Cambridge and Oxford are higher, but they are city councils, without responsibility for transport).

The increasing commuting share of cycling has occurred alongside a huge reduction in car commuting and rise in public transport use.

Second - outside London, the areas that have seen cycling growing have tended to be urban areas, including beneficiaries of the cycling towns and cities programme. Bristol has seen cycle commuting's share of transport rise by 3.1%; in Brighton and Hove it has gone up 2.2%. Some other urban areas have seen modest increases in cycle commuting, including Portsmouth, Cardiff, Manchester and Newcastle.

Figures for the change in the total number of cycle commuters are mapped here.

Data for the above map can be downloaded in a table format.